Note: Permit us to introduce Jackson Thurnquist, the newest member of the Redleg Nation family. Jackson will be writing regularly here at the Nation throughout the 2018 season. Please make him feel welcome!

Check out the previous installments of our Redleg Nation 2018 Season Preview series:
—Shortstop

Until last year, the Reds never had to look further at second base than Brandon Phillips. With his gold-glove defense and MVP smile, Phillips was the rock of the team for over a decade; in fact, from 1997 to 2017, no player had more plate appearances for the Reds than Phillips. In his time with the Reds, Phillips made 3 All-Star teams, won 4 Gold Gloves and 1 Silver Slugger, accumulated 31.8 Wins Above Replacement (second only to Joey Votto during that time), and appeared in 1,614 of 1,782 games played.

After Phillips left (or, was unceremoniously traded to the Braves for a bucket of baseballs after several blocked moves and months of front office tension), the Reds found themselves with an enormous hole in the middle of the infield and no clear heir apparent. Dilson Herrera, the centerpiece of the Jay Bruce trade and briefly presumed Ã¢â‚¬Å“future of second baseÃ¢â‚¬Â, underperformed in AAA to close the 2016 season and had continuing issues with the health of his shoulder. Alex Blandino, the first round pick from 2014, was fresh off his second consecutive poor showing in AA Pensacola and was quickly losing his prospect luster. So the Reds turned to Jose Peraza, the presumptive Ã¢â‚¬Å“shortstop of the futureÃ¢â‚¬Â, and added a last minute waiver wire pickup, bench infielder Scooter Gennett, as insurance. If that sounds muddled, donÃ¢â‚¬â„¢t worry, things have only gotten more confusing in the year since. 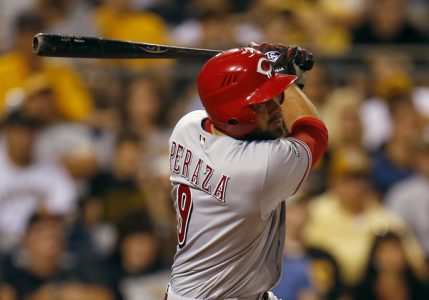 Jose Peraza: Peraza was acquired from the Dodgers after the 2015 season in the trade that sent Todd Frazier to the White Sox. A former top 100 prospect in the Braves system, Peraza performed well in the second half of 2016 filling in for the injured Zack Cozart, hitting .324/.352/.411 with 21 stolen bases in 74 games. In 2017, he was given the starting second base job to replace Brandon Phillips, and took a massive step back, hitting only .259/.297/.324 with just 20 walks and 18 extra-base hits on the season. In July, he lost the everyday role at second base to breakout star Scooter Gennett. Speaking ofÃ¢â‚¬Â¦

Scooter Gennett: Gennett spent four years with Milwaukee as a backup second baseman, hitting a lukewarm .279/.318/.420 in 1,637 plate appearances over that time. The Reds picked him up days before Opening Day last season on the waiver wire to provide depth in a strained middle infield. Gennett then decided to spend the year swinging out of his shoes, hitting a remarkable .295/.342/.531 with 27 home runs and a 124 OPS+. With Gennett breaking out and Peraza struggling mightily, manager Bryan Price gave Gennett the everyday role in July, and he is the presumptive starter at second base to begin 2018.

Cliff Pennington: Pennington is a switch hitting utility infielder who will turn 34 in this, his 11th season in the majors. In that time, he has played in 955 games, with 589 coming at shortstop, 208 at second base, and 98 as a pinch hitter. Pennington is the owner of a career .243/.310/.341 batting line, and while a career 79 OPS+ isnÃ¢â‚¬â„¢t great, his fielding versatility should make him a valuable bench option around the infield. 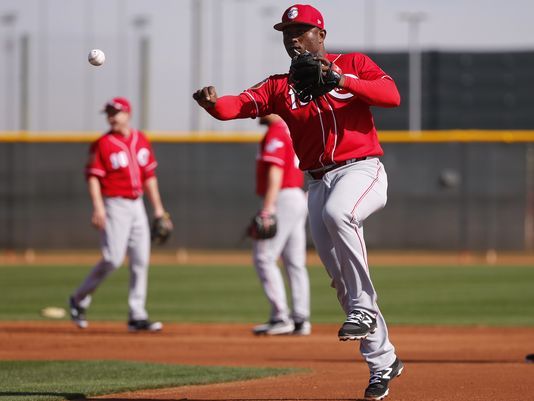 Dilson Herrera: Herrera signed with the Pirates as an international free agent out of Colombia after the 2010 season, and was traded to the Mets in August 2013 as part of a deal that sent Marlon Byrd to the Pirates. At the 2016 trade deadline, the Reds acquired Herrera as the central piece of the Jay Bruce trade, seemingly anticipating him being the second baseman of the future with Phillips clearly on the way out. While he hit moderately well in AAA Louisville after the trade, a sore shoulder would prematurely end his 2016 season and prevent an appearance in the majors. This would be a sign of things to come, as 2017 saw him constantly dealing with nagging shoulder injuries and hitting a disappointing .264/.312/.397 in his abbreviated season in Louisville, before finally going under the knife in what may have been a long-overdue shoulder surgery. Herrera is also out of minor-league options, meaning that the Reds cannot assign him to the minors unless he first passes through waivers, and despite a history of injuries, itÃ¢â‚¬â„¢s unlikely he would clear waivers without any of the other 29 teams picking him up.

Alex Blandino: Blandino was a first round draft pick by the Reds in 2014 and began his career as a top rated middle infield prospect. Seen as a bat-first middle infielder with a good arm, Blandino hit well in his brief stops at Rookie Billings, Low-A Dayton, and High-A Daytona, and by fall 2015 found himself already on the fast track at AA Pensacola. It was there he ran into a wall, however Ã¢â‚¬â€œ he hit a disappointing .235/.350/.374 in 30 games to finish 2015. He spent all of 2016 in Pensacola and things did not improve Ã¢â‚¬â€œ his slashline fell to .232/.333/.337, and many began to wonder loudly if Blandino still represented a viable option in the middle infield going forward. Desperately in need of a good season, Blandino again began the year at AA in 2017, and found his poise at the plate again, hitting .259/.374/.462 with a stellar 13.6% walk rate. He was promoted mid-season to AAA Louisville, where his hot streak continued to the tune of .270/.390/.444 to close out the season.

Shed Long: Long was drafted by the Reds in the 12 th round of the 2013 amateur draft, and wasnÃ¢â‚¬â„¢t initially seen as a top rated prospect either nationally or within the Reds system. His breakout came in 2015, when he was promoted to Low-A Dayton. There, he hit a resounding .283/.363/.474 with a 10.4% walk rate. The hot hitting continued throughout 2016 and the first half of 2017, across Dayton and High-A Daytona. However, after a midseason promotion to AA Pensacola, Long missed some time in August to a wrist injury, and after returning, he hit a disappointing .227/.319/.362. A lackluster transition to AA doesnÃ¢â‚¬â„¢t seem to have discouraged prognosticators, however, as Long was ranked the #7 prospect in the Reds system and #6 overall second-base prospect in baseball by MLB.com, citing his strong power and solid contact across multiple seasons in Dayton and Daytona. The Reds organization is still high on Shed Long as well; though heÃ¢â‚¬â„¢ll likely begin 2018 in AA Pensacola, Long was invited to major league camp this spring and has gotten plenty of looks at the plate and at second.

As far as the major league starters go, the situation to open the 2018 season is pretty set in stone right now. Scooter Gennett has rightly earned the everyday second base role, and that job will be his to lose in 2018. Jose Peraza will be the starting shortstop in 2018 Ã¢â‚¬â€œ outside of Pennington and Gosselin, neither of which are starting caliber, the Reds donÃ¢â‚¬â„¢t have anyone in their system capable of handling shortstop every day besides Jose Peraza, so heÃ¢â‚¬â„¢ll get the job almost by default. 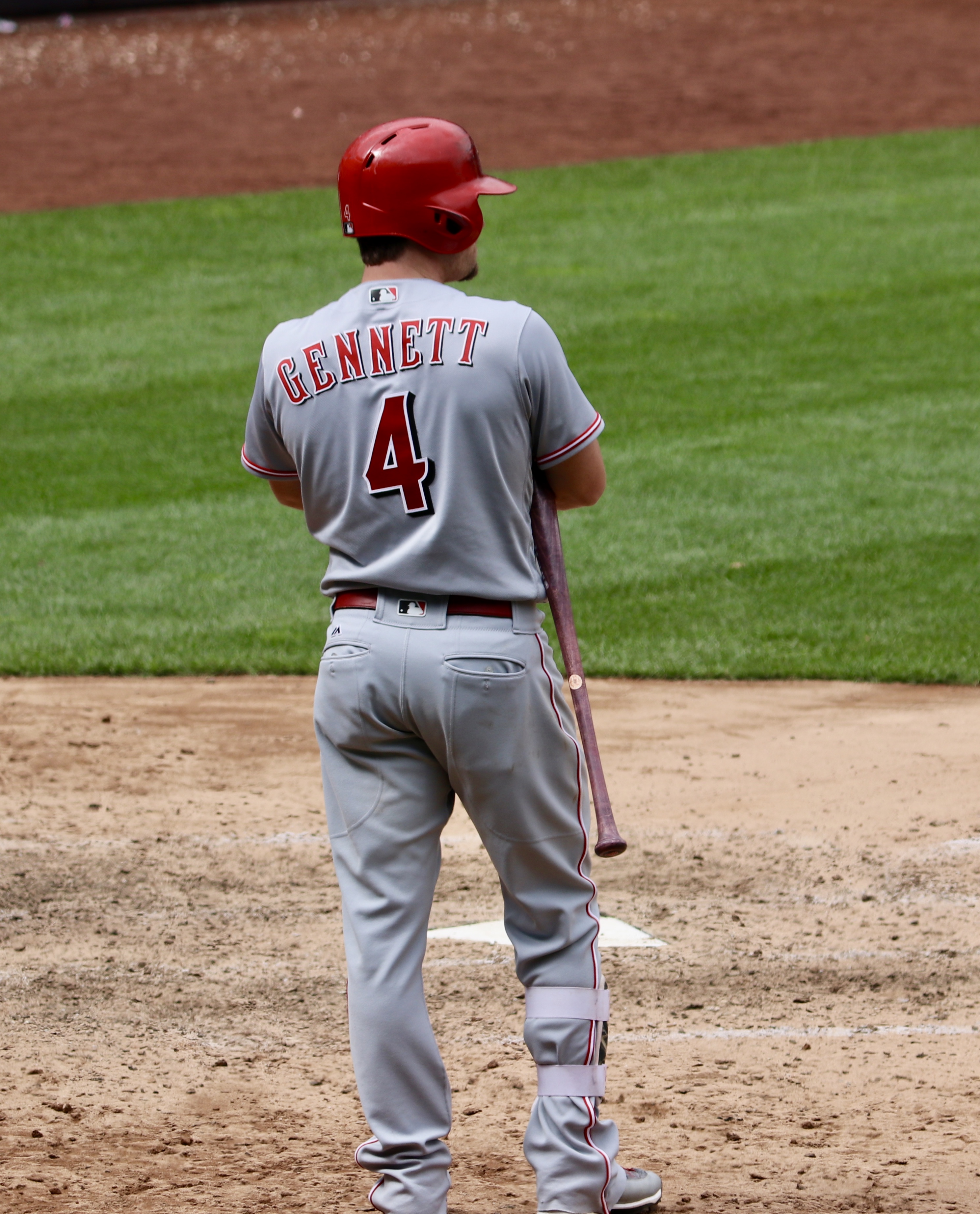 From there, things get trickier. If the past is any indicator, the Reds will likely carry two infielders on their bench to start the season. As it stands now, there are four people competing for those two spots: Pennington, Gosselin, Herrera, and Blandino. Pennington and Gosselin are both signed to minor league deals, so the Reds are free to stuff them in AAA if they chose. Blandino is still young and only recently graduated to AAA, and if you still consider him a prospect, you may be adverse to putting him on the bench rather than giving him regular at-bats in Louisville.

Herrera is out of options: he must either join the Reds or face waivers, where heÃ¢â‚¬â„¢s unlikely to pass through unclaimed. Given his history of injuries and lackluster performance recently, I would doubt that Herrera represents a legitimate prospect going forward. If I were to guess, I would say that Herrera joins the team as one of the two bench options, and Pennington, with his versatile glove and switch hitting bat, is the other. Blandino will look to continue his bounce back in AAA, while Shed Long hopes to begin his bounce back in AA.

Looking past Opening Day and into the second half of the season, the middle infield becomes harder to project. There are serious doubts about GennettÃ¢â‚¬â„¢s ability to replicate his 2017 success going forward. GennettÃ¢â‚¬â„¢s batted ball profile in 2017 remained largely unchanged from his career norms, and his success seemed spurred by an elevated batting average of balls in play and HR/FB rate, two stats that tend to be difficult to repeat in consecutive seasons. Coupled with questionable defense and bad splits against lefties (.248/.287/.404 last year), and itÃ¢â‚¬â„¢s easy to envision Gennett losing the second base job this season. 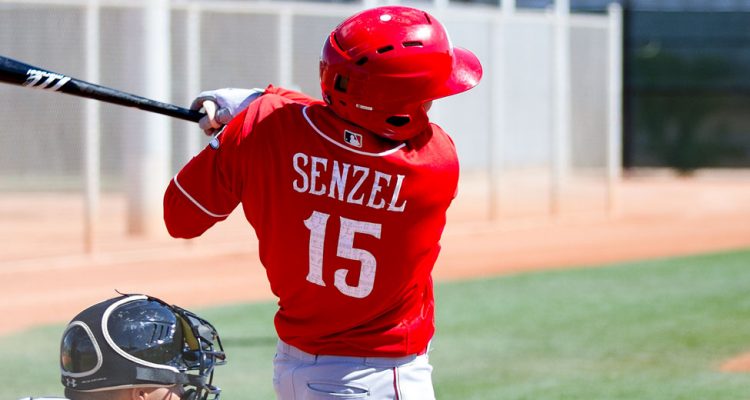 Additionally, there is one player IÃ¢â‚¬â„¢ve yet to name whoÃ¢â‚¬â„¢s been hanging over the middle infield like a specter this offseason: #1 overall Reds prospect and #7 prospect in all of baseball, Nick Senzel. Though heÃ¢â‚¬â„¢s likely to start the year in AAA, SenzelÃ¢â‚¬â„¢s elite hitting pedigree will force him onto the big league roster before seasonÃ¢â‚¬â„¢s end, and with Eugenio Suarez manning third base everyday, itÃ¢â‚¬â„¢s likely he will join the team at either shortstop or second base. ItÃ¢â‚¬â„¢s unclear which position heÃ¢â‚¬â„¢ll land at Ã¢â‚¬â€œ heÃ¢â‚¬â„¢s taken reps at both positions this spring, and Price and Dick Williams have said he may bounce around a while before he settles in permanently Ã¢â‚¬â€œ but it is almost inevitable that Senzel will eventually find a position and claim it as his own going forward.

Two years down the road becomes almost guesswork. To say what the second base situation may look like on Opening Day 2020 with any certainty would require answers to questions we donÃ¢â‚¬â„¢t have yet: will Gennett continue his hot hitting or turn back into a pumpkin? Will Blandino be able to bounce back and reclaim prospect status? Does Shed Long carry his power hitting all the way to the majors? And where does Nick Senzel settle in? These are all unknowns at this point, but since making predictions is more fun than just saying Ã¢â‚¬Å“I donÃ¢â‚¬â„¢t knowÃ¢â‚¬Â, letÃ¢â‚¬â„¢s make some predictions.

With Gennett regressing back into his Brewer self and the lack of viable options outside of Peraza at short, IÃ¢â‚¬â„¢m going to take a guess and say that Senzel spends most of his time at second base once he comes up midseason. As arbitration makes him more expensive, the Reds will
probably look to offload Gennett elsewhere rather than pay him millions to be a platoon option.

Blandino may improve slightly, but I donÃ¢â‚¬â„¢t think heÃ¢â‚¬â„¢ll be good enough to start on a team trying to contend Ã¢â‚¬â€œ he may be a good piece to send to a rebuilding team. Shed Long will continue hit well in the minors, but I doubt he demands a spot on the roster in the way Senzel has. Whether Shed Long becomes the starting second baseman in 2020 may depend on whether or not there is another player on the team underperforming enough to allow Senzel to move to their position.

Opening Day 2020:
Starter: Shed Long (Nick Senzel moving to either SS or a corner OF spot)
Backups: One of either Herrera or Blandino
Minor Leagues: Brantley Bell? (AA)?