A couple of weeks ago, I took a look at the projections for the Reds offense.Ã‚Â Things weren’t all that great. That’s fine, because as we all know, the Reds pitching staff over the past few years has been lights out. A big part of all three World Series championships in the past five years, when the offense has looked bad, the Reds have always had the super-reliable pitching staff to fall back on.

Wait, are you saying that’s not true? Ah, a guy can dream.

To the contrary, the Cincinnati Reds pitching staff has had a historically bad stretch over the past few seasons. Only a few seasons removed from a season in which none of the five starting pitchers on the Opening Day roster missed a start, the Reds have debuted a plethora of green arms to eat innings and fill in for the oft-injured top of the rotation. And indeed, the projection systems seem to think that trend will continue in 2018.

For our uses, I’ve only included players that project to be factors at the big league level as we enter Spring Training. You could add or subtract a few guys from this list, but for now it’ll do. 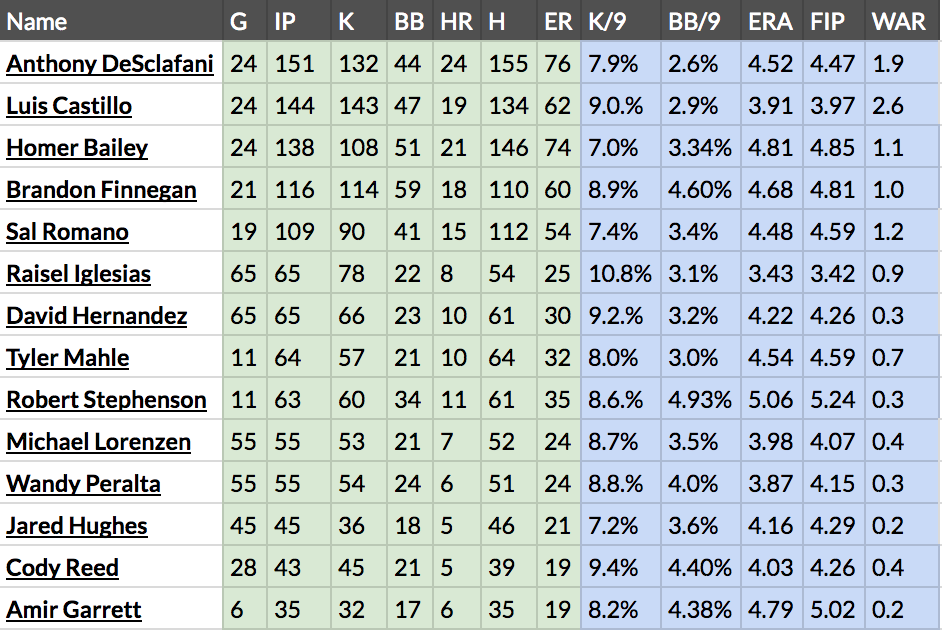 A few takeaways from these projections:

It’s more of the same health in 2018. According to both projection systems, not one Reds starter will reach 200 innings pitched, and none of them come particularly close. ZiPS projects Luis Castillo to lead the team in innings, but only projects him to pitch 156 of them. Interestingly, Tyler Mahle and Sal Romano are 2 and 3 on this list, presumably because the projections were made before Bryan Price pit them against each other in Spring Training. Or, because projections don’t care about local news media. Steamer thinks Anthony DeSclafani leads the team in innings pitched this year, just cracking 150. 150 innings from Disco likely means he’s hurt again, so I’ll drive quickly away from talking more about that.

Aren’t player comps fun? Don Drysdale pitched his entire career with the Brooklyn/Los Angeles Dodgers from 1956-1969. During that time all he was able to accomplish was a 3.02 FIP over more than 3,000 innings pitched, fueling his way to 9 All-Star teams, a Cy Young Award, 3 top 5 MVP-voting finishes, and 3 world series titles. Oh, and at the end of his career they hung a plaque up with his name and likeness in Cooperstown, New York at a little place called the Hall of Fame. Reds fans would surely take that in exchange for Dan Straily, right?

It’s high praise for a 25 year-old kid with 90 major league innings to his name. But, if you look at the numbers, their first seasons weren’t all that far off. It’s hard to compare across multiple decades like this, but one indicator we can use is ERA+, which can be used to compare pitcher performance to the league average for an individual season (or an entire career). Yes, I know ERA, and therefore ERA+, is flawed. But baseball was black and white back then, and no one had gotten around to inventing FIP just yet.

While Drysdale was very good out of the gate in 1956, pitching 99 innings with a 152 ERA+ (meaning his ERA was 52% better than the league average), Luis Castillo was in the ballpark (no pun intended), pitching 89.1 innings with a 141 ERA+. Drysdale’s ERA+ was, for the most part, much lower than 152 for most of his career (although, only twice under 100 towards the end). His ERA+ was 122 over his 14 seasons, which is really good. It’s a benchmark we should watch as Castillo’s career blossoms. I’m not ready to say he’s a Hall of Famer, but his rookie year was Hall of Fame caliber if you look through the right lens.

There doesn’t seem to be a clear consensus between these two models as to who the starting five pitchers in the rotation will be. That’s fine, because our real life manager doesn’t know the answer to that question either! It’s probably a feature, not a bug, of these projection systems. After all, choosing five guys to receive starter-level innings before games even start is a recipe for disaster in the real world. It makes sense that the systems would hedge their bets. It’s interesting to see just how differentiated they are, though.

For instance, ZiPS clearly thinks Amir Garrett is going to be a factor in 2018, moreso than Robert Stephenson, Cody Reed, Brandon Finnegan, Anthony Desclafani, and Homer Bailey. Steamer is way lower on Amir, slotting him in for only 35 innings over 6 big-league games. Personally I think the realistic number of Innings Pitched for Garrett lays somewhere between these two numbers, but closer to the Steamer projection, especially with what we know now.

Raisel Iglesias Should Be a Desired Trade Asset

Both projection systems see our closer having another fantastic season. ZiPS, especially, thinks Iggy will have a fantastic season, including a very nice 76 FIP-, which would be the best on the team, and nearly 25% better than the average MLB pitcher. That’s the kind of piece that can net you a return of multiple solid prospects or major league pieces. By the time the Trade Deadline rolls around, the Front Office should know whether the team is ready to fill holes with major league players, or if the pipeline should be solidified with top prospects. Either way, Iglesias should have a fantastic season, and would be a premium trade piece at the deadline if he puts up these kinds of numbers.

Michael Lorenzen is Cemented in the Bullpen

Despite being named a contender for the open 5th slot in the rotation, neither Steamer or ZiPS has Michael Lorenzen receiving a starter’s plate of innings. They also project him to struggle out of the ‘pen in 2018, both systems projecting him to accrue only .4 WAR over the season. There’s some rough peripherals thrown in there as well (1.02 FIP- from ZiPS, 4.07 FIP from Steamer) that place him just around league average as a bullpen piece. That isn’t nothing, and would certainly be valuable in the Reds bullpen, but it’s not what fans and the Front Office are expecting from Lorenzen.

That’s all for the projections. I’ll be dropping in once or twice a month throughout the season to give my thoughts and start some discussions. In the meantime, give me a follow on Twitter @JordanBarhorst. Go Reds!