The Reds outfield finished 28th out of 30 MLB in teams in 2017 in wRC+ (86). That probably comes as a bit of surprise to some, as the Reds as a team were pretty good offensively (they ranked 15th in the MLB in wRC+ at 96). That was because the Reds employed quite possibly their best offensive infield in team history.

If you look closer at the Reds outfielders in 2017, there some really good platoon splits. 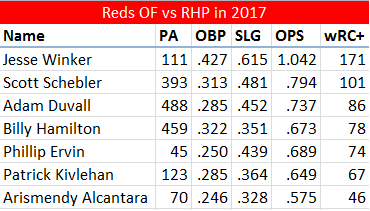 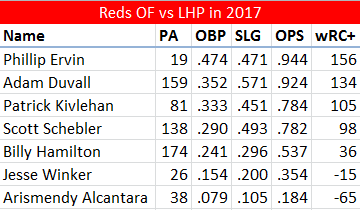 Several things stand out when you look at the platoon splits.

Jesse WinkerÃ‚Â mashed against RHP, but really struggled in a very small sample against LHP. The minor league numbers for Winker support that he is a much better hitter vs RHP. He had an .888 OPS vs RHP at AAA in 2017, but had a .653 OPS vs LHP.

Adam DuvallÃ‚Â was much better vs LHP this season. The career splits aren’t as drastic: .767 vs RHP, .804 vs LHP. One important thing to remember about Duvall is that he is an elite defender in LF. Since the start of 2016, Duvall is tied with Billy Hamilton with 24 defensive runs saved, which is tied for the 10th most of any player at any position in the MLB.

Billy HamiltonÃ‚Â was below average against RHP (although his .322 OBP is encouraging), but was miserable against LHP (a .241 OBP is about as bad as you can perform in the MLB). It was the second consecutive season that Hamilton was better vs RHP, as he had a .696 OPS vs RHP in 2016, and was .576 vs LHP. The career numbers support that Hamilton is better vs RHP, but it’s not as drastic as this past season: .643 OPS vs RHP, .601 vs LHP.

Patrick KivlehanÃ‚Â had a nice season vs LHP in a larger sample than Ervin. Looking at Kivlehan’s last full season in the minors, this was the case as well. In 2016, Kivlehan posted a .882 OPS vs LHP, and .642 vs RHP.

The Reds should absolutely employ a platoon outfield in 2018. Almost all of the teams in the postseason do this to some degree. Here is what I think the Reds should do:

The first thing that I am sure will puzzle some is platooning Winker. Everyone knows that he needs to get consistent PA at the big league level. The reality is that over the past three seasons in the minors, Winker has a .653, .756, and .654 OPS vs LHP. Winker could only start against RHP, and still easily get 500 PA with pinch-hit appearances, double-switches, etc.

Phillip Ervin might not make the team out of ST, so that could squash him playing CF vs LHP. But, to this point in his career Billy Hamilton has proven he can’t hit LHP at all. Putting Ervin in CF vs LHP is much about Hamilton’s inability than Ervin’s small sample success vs LHP.

Another out of the box option would be to try Mesoraco in RF against LHP. He has a career .796 OPS vs LHP (104 points higher than vs RHP). That could allow the Reds to put Kivlehan in AAA, and free up another roster spot while platooning.

Conclusion: if you were ranking the Reds outfield overall, it would be near the bottom of the MLB. The Reds really need to maximize what they do have. The important thing to remember, is that if the Reds use this platoon every night, they’ll have either Duvall or Schebler on the bench every night. That is a heck of weapon to have. Hamilton on the bench vs LHP, gives you a great speed weapon you can engage at any point in the game.