We’ve still not attained full Spring Training status, so this is usually rough times for People of Baseball. Well… not me. I roll around in all things Olympics, so this is my biannual party of staying awake 17 days straight.

My favorite part is all the international harmony and sportsmanship. 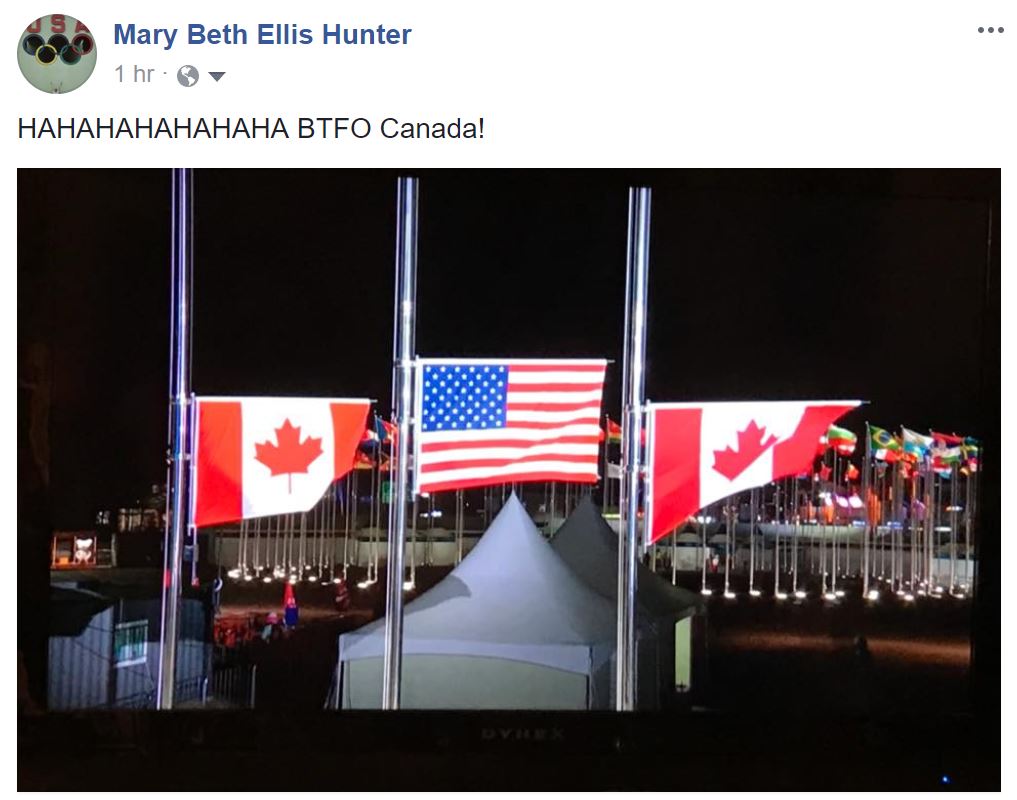 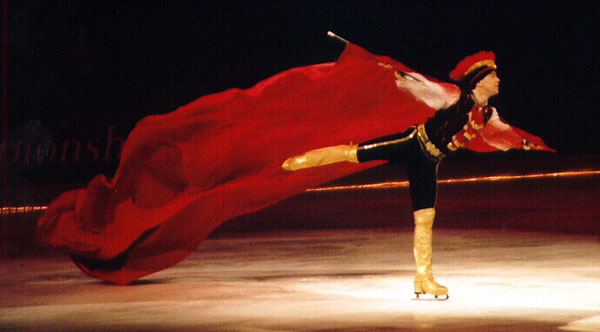 the luge action in South Korea is yet another hurdle between you and watching the current starting pitcher melt down. So I’ve been saving this one for you for precisely this moment– when you need it the most.

Look what I brought to show and tell today: 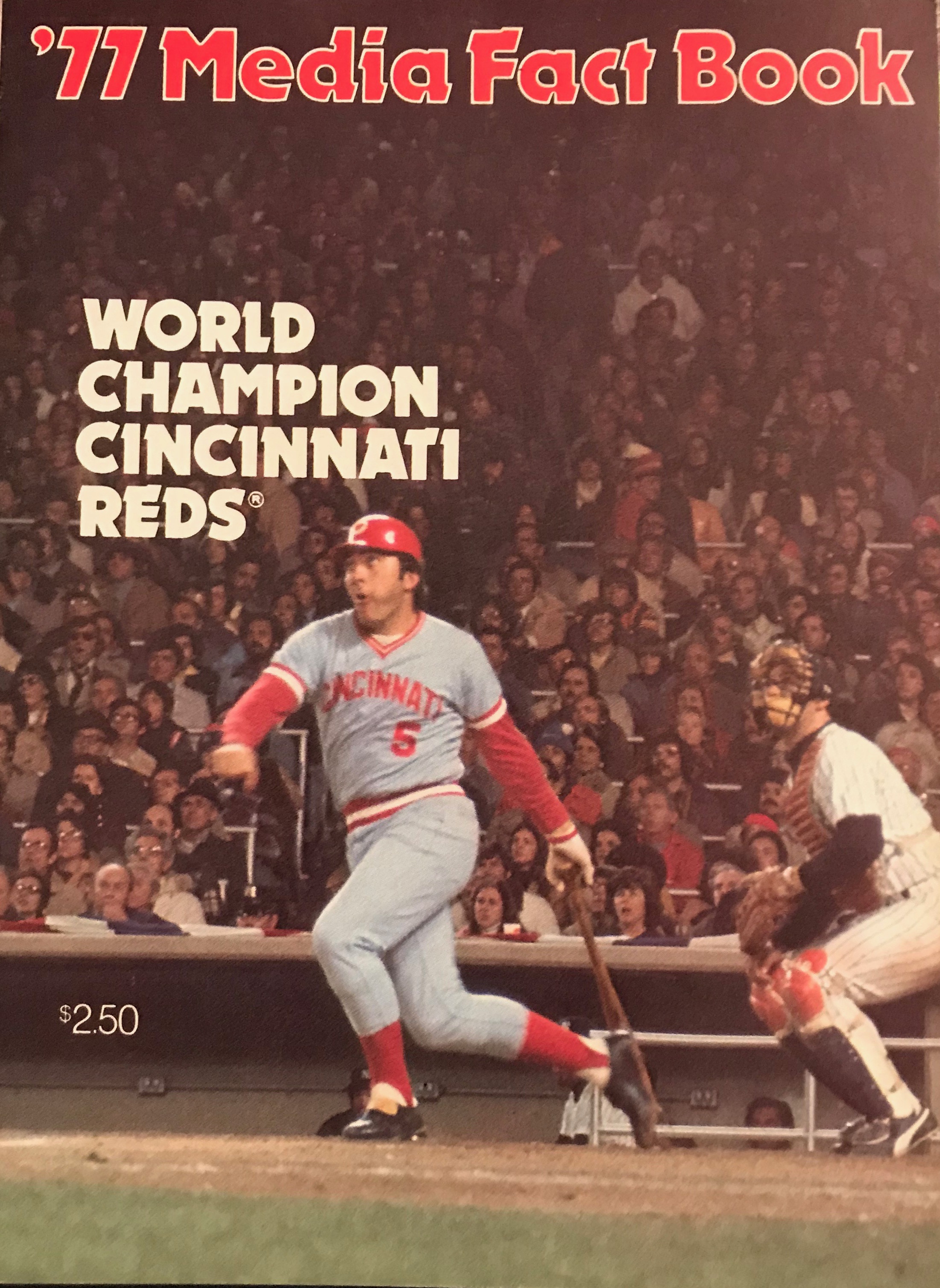 Considering it’s the cover photo, it’s too bad they couldn’t find a better picture of this guy, whoever he is. Maybe it’s the only one they had.

Let us place this in historical perspective. The planet owes a great deal to 1977, as that is the year the following massive blessings were bestowed upon humanity:

-Seattle Slew won the Triple Crown (he did not ruin it. He is a horse.) (Sometimes I wish George Lucas were a horse.)

-me (ruining it every single day since)

It was, as we can see, a different era, free of CGI but choked by polyester. This was a time when newspapers, upon publishing a picture of any random citizen, including a child, included such non-creepy information as their full name and street address. To that end: 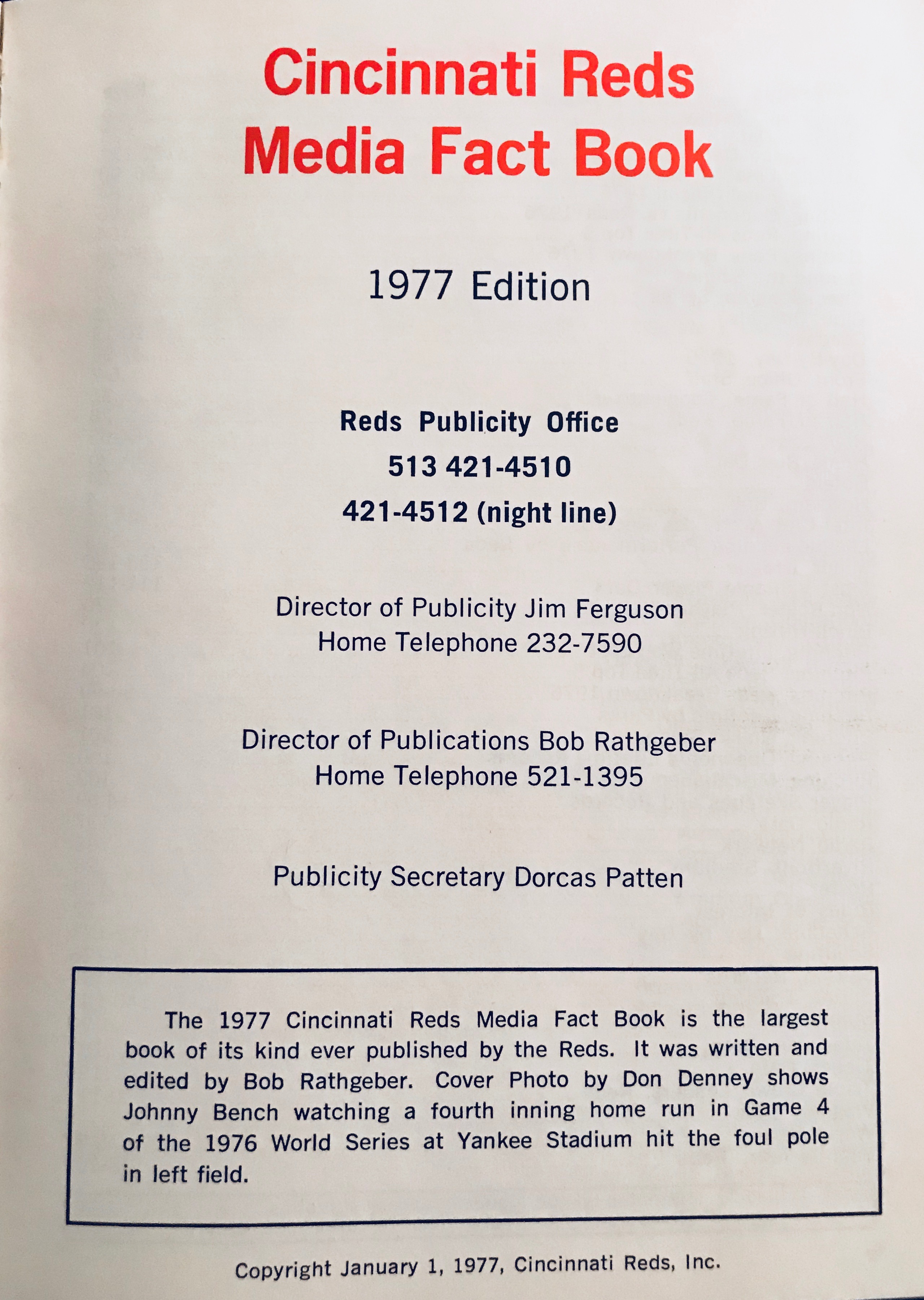 I would like one of you, any of you, to find someone to suggest to Bob Castellini that the next edition of the Reds media guide contain his home phone number on Page 1. Be sure to have cameras rolling. 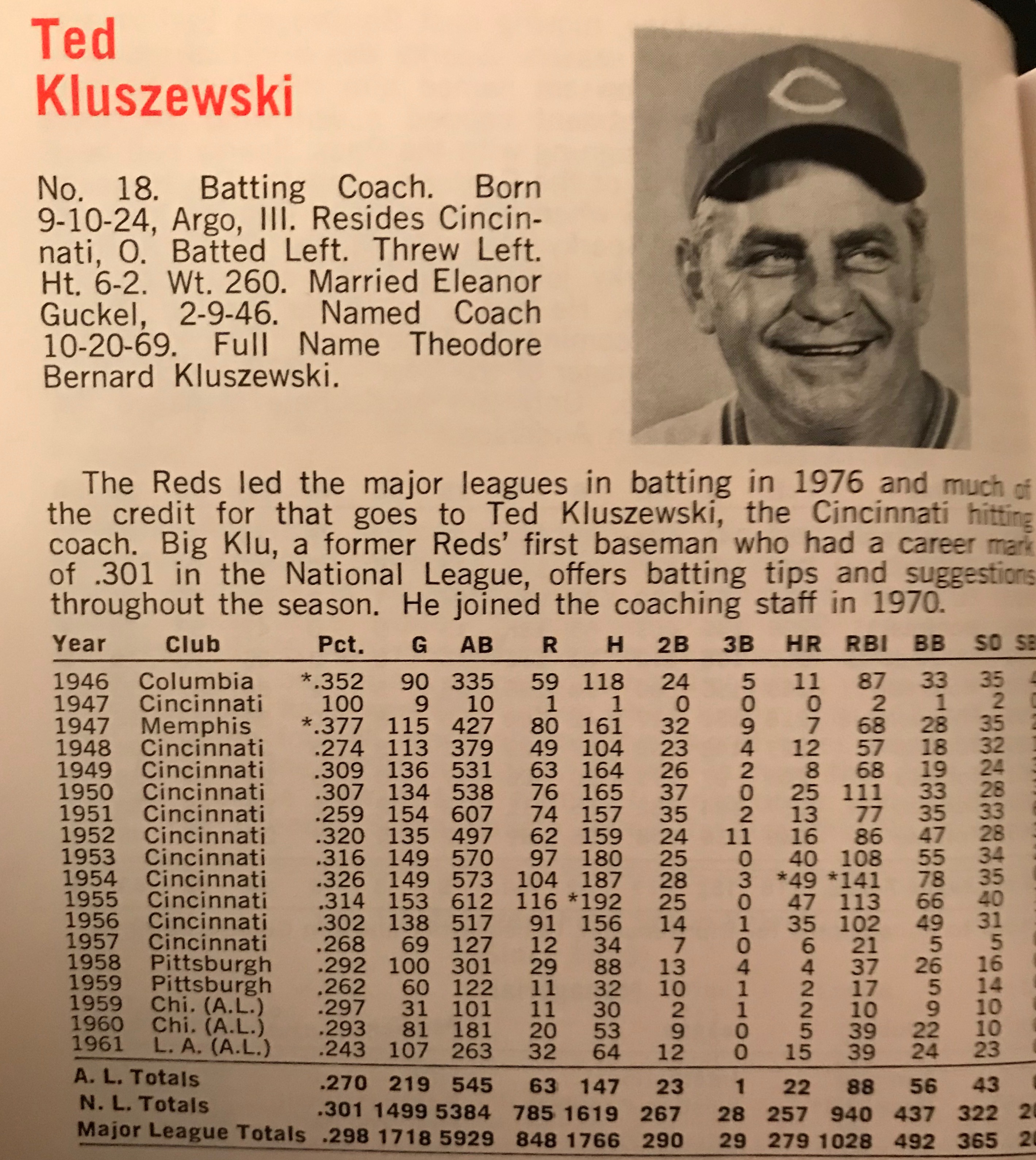 I’m grateful that if only for a moment, I shared the planet with this talented (but, most importantly, kind) man. He should be far better known to generations who didn’t see him play, but ironically, the Big Red Machine of which he was such an integral coach tends to suck up most of our adoration oxygen. 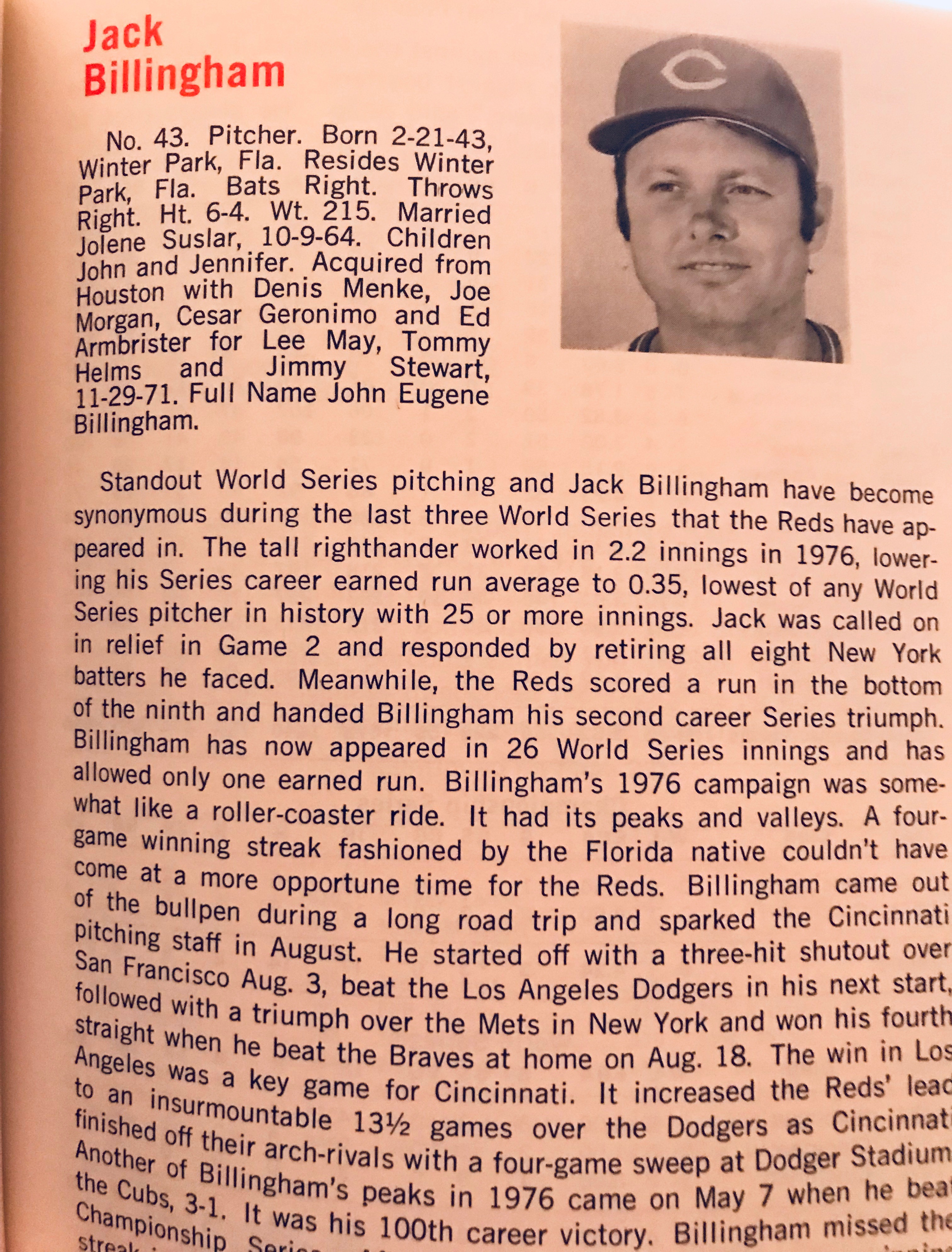 It’s lovely to see Jack BillinghamÃ‚Â like this, with dark hair and a confident smile, because I know him only as a 74-year-old fixture at the Hall of Fame, gently mocking small children who have never heard of him and acting quite pleasantly towards me, his staff keeper during an Induction Weekend autograph session.

Who we fully are is never who others see for an hour on a Saturday afternoon. 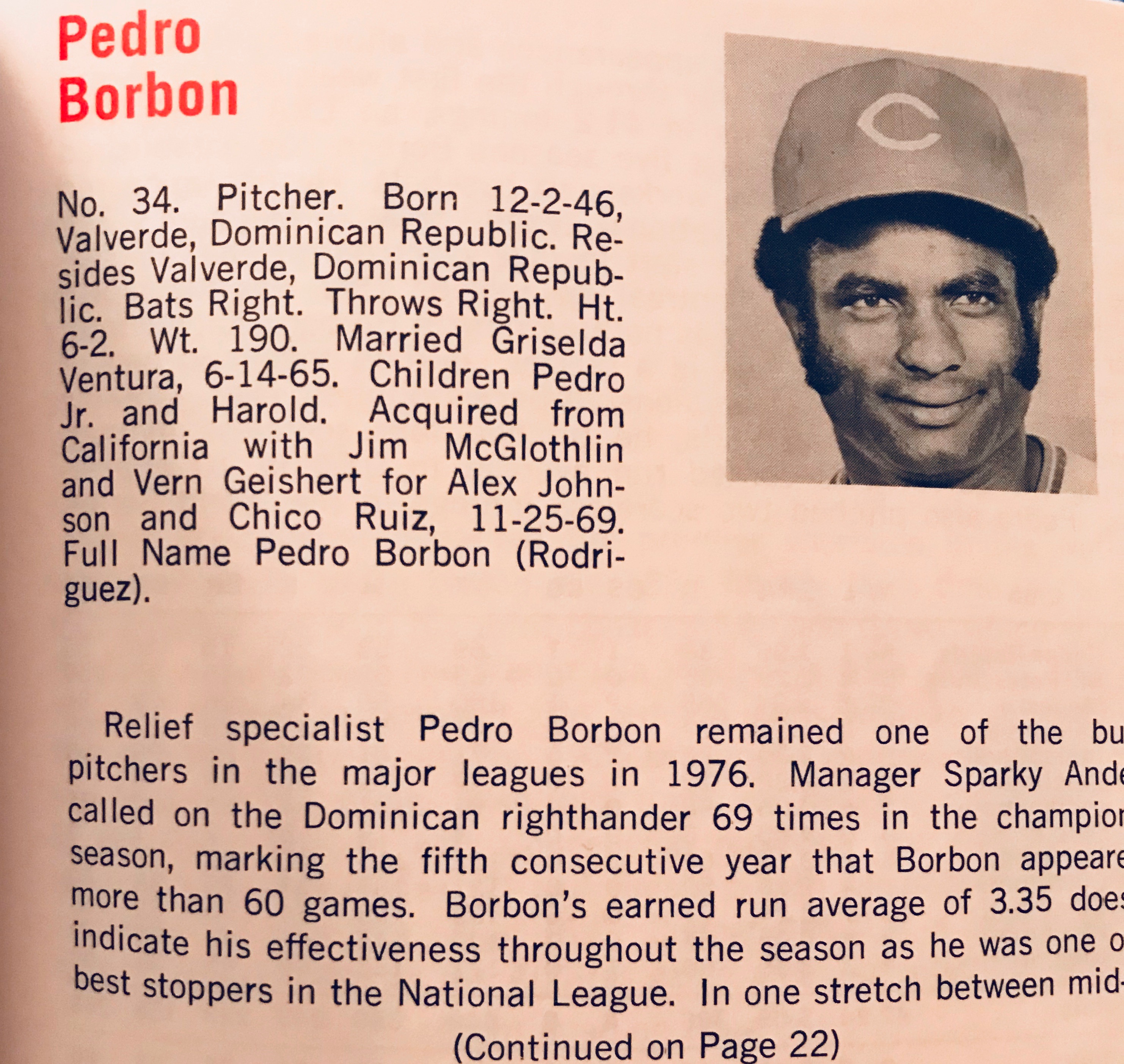 I have no earthly clue who this is but I strongly feel his sideburns must be digitized for posterity.

Really I just wanted to live for a moment in an era in which we all paid attention to magic numbers. 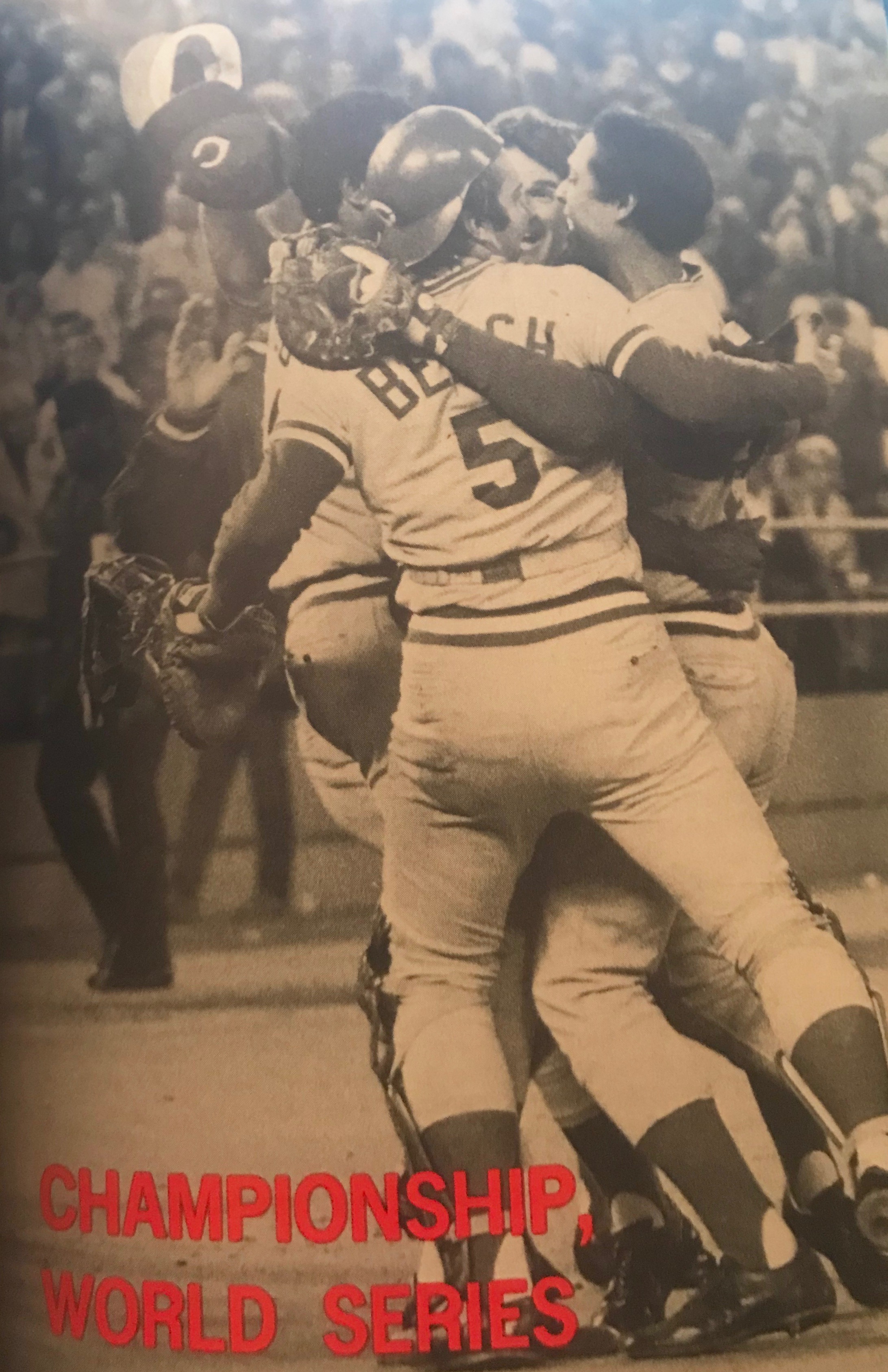 And had sections like this in the media guides. 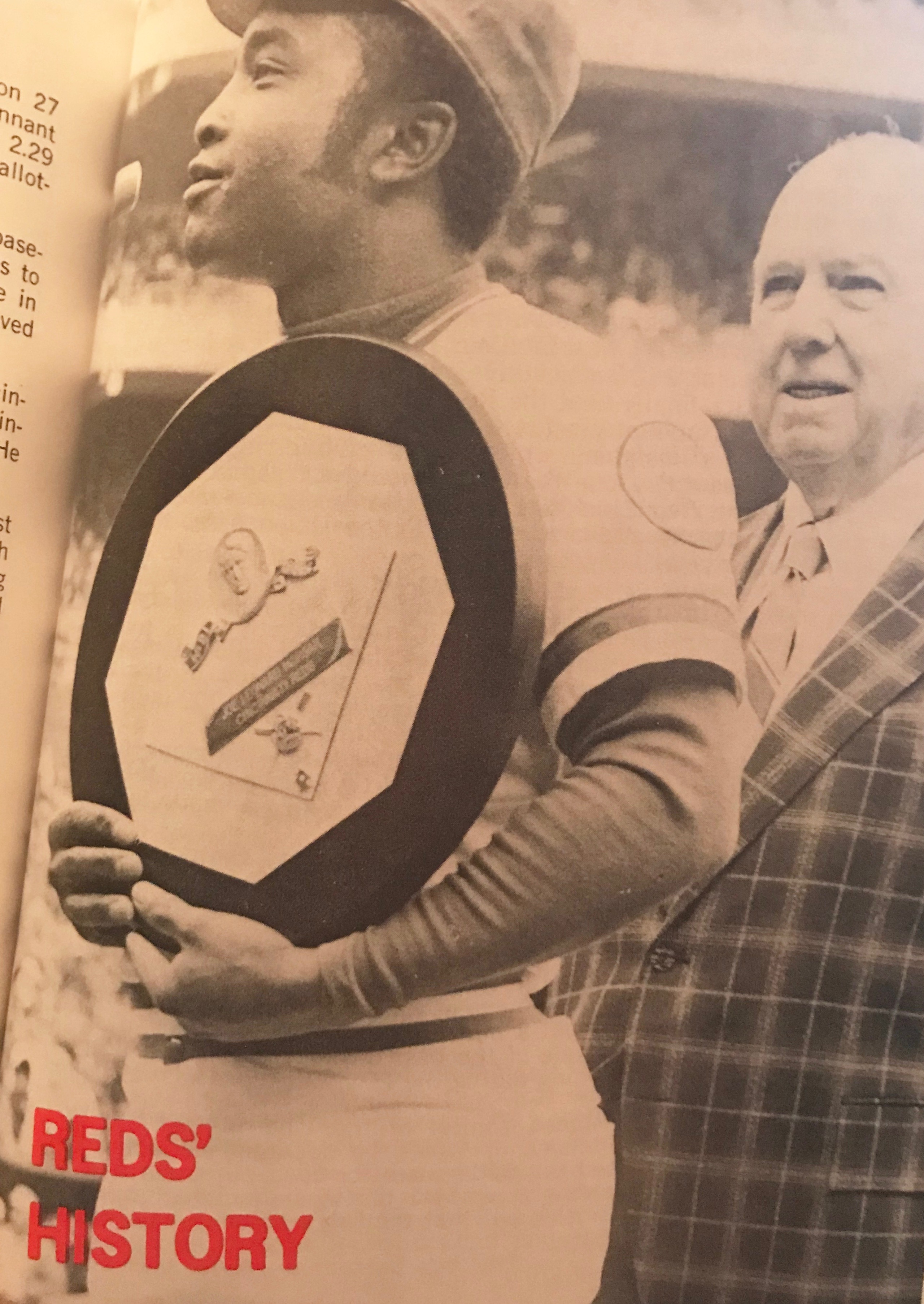 This is a very important page because it contains a properly placed apostrophe. You cannot imagine how immensely and constantly an English major suffers from each abused apostrophe.

You can make your own joke about the sportscoat. I’m too busy being pleased about the apostrophe. 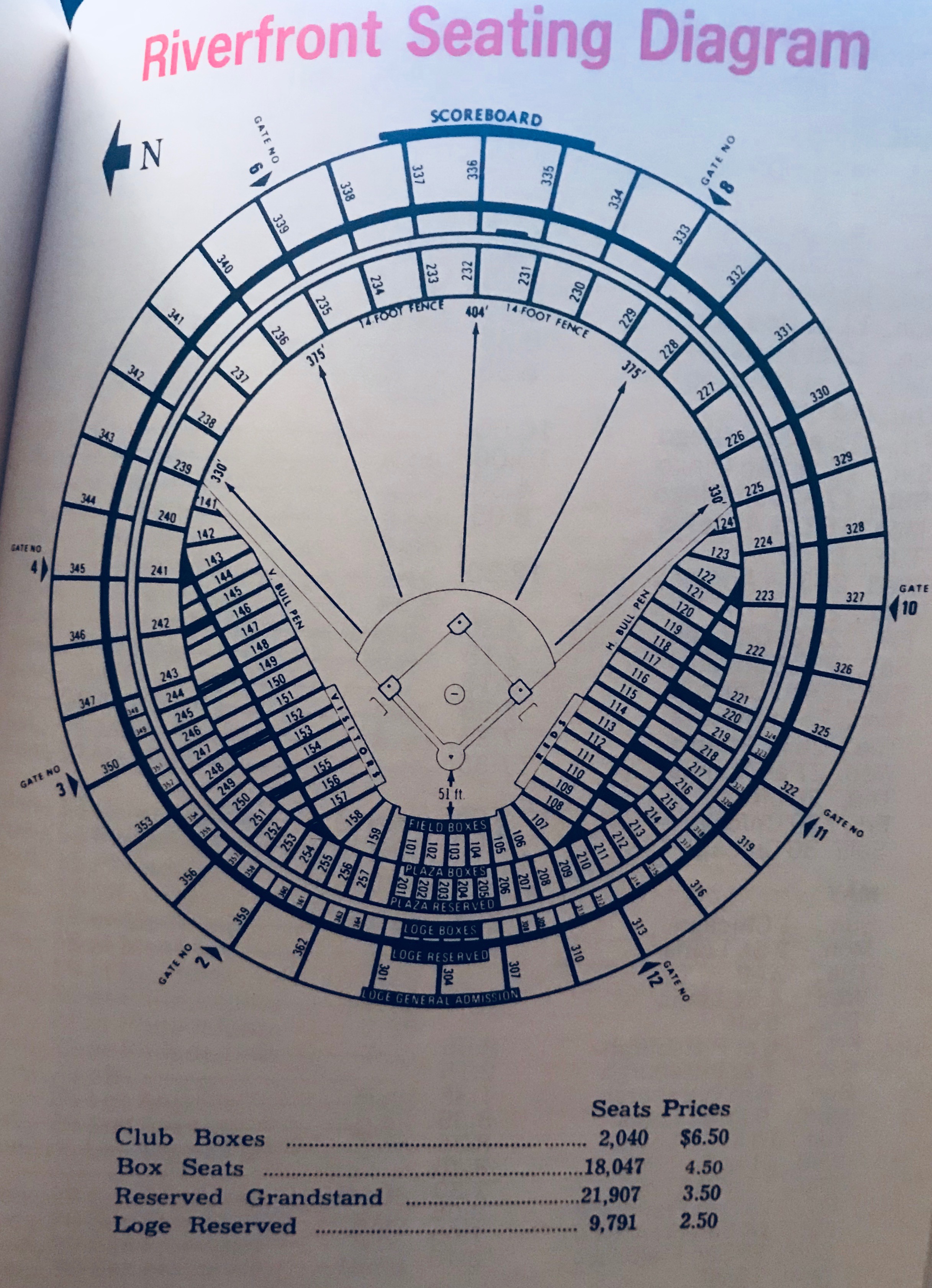 $2.50 in the loge, people, but only reserved. You needed to sacrifice a Harvey Wallbanger or five at the disco to get into the ballpark. 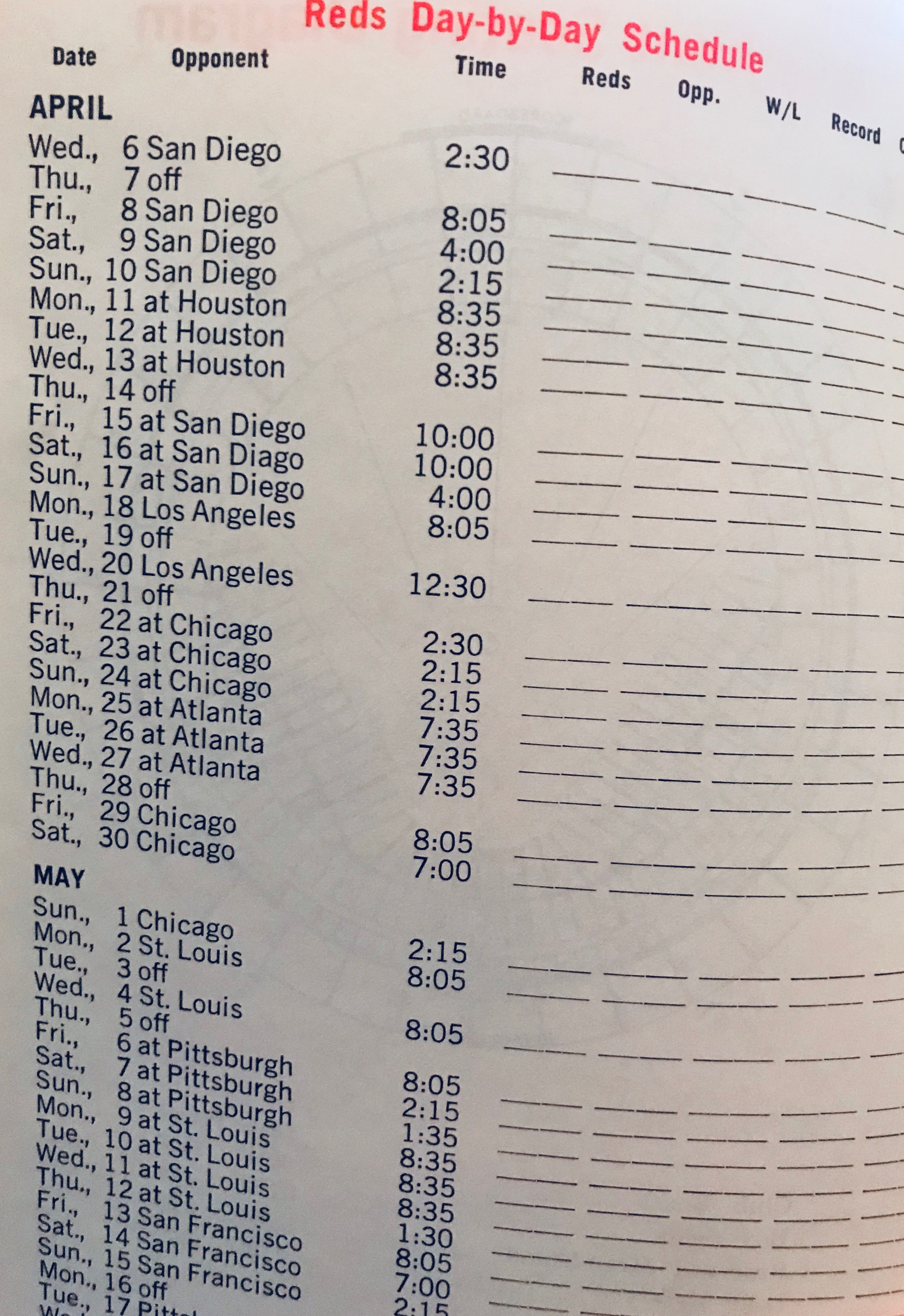 This is adorable. There’s a place to keep a record of the season because 1) it’s assumed people might actually want to remember the season and 2) if you forgot how something went down, how would you know? Check a newspaper? There was no hope for acquiring instantaneous information. None at all. People just walked around all day with no idea which movie that one guy on Love Boat was in. They just had to live with it. 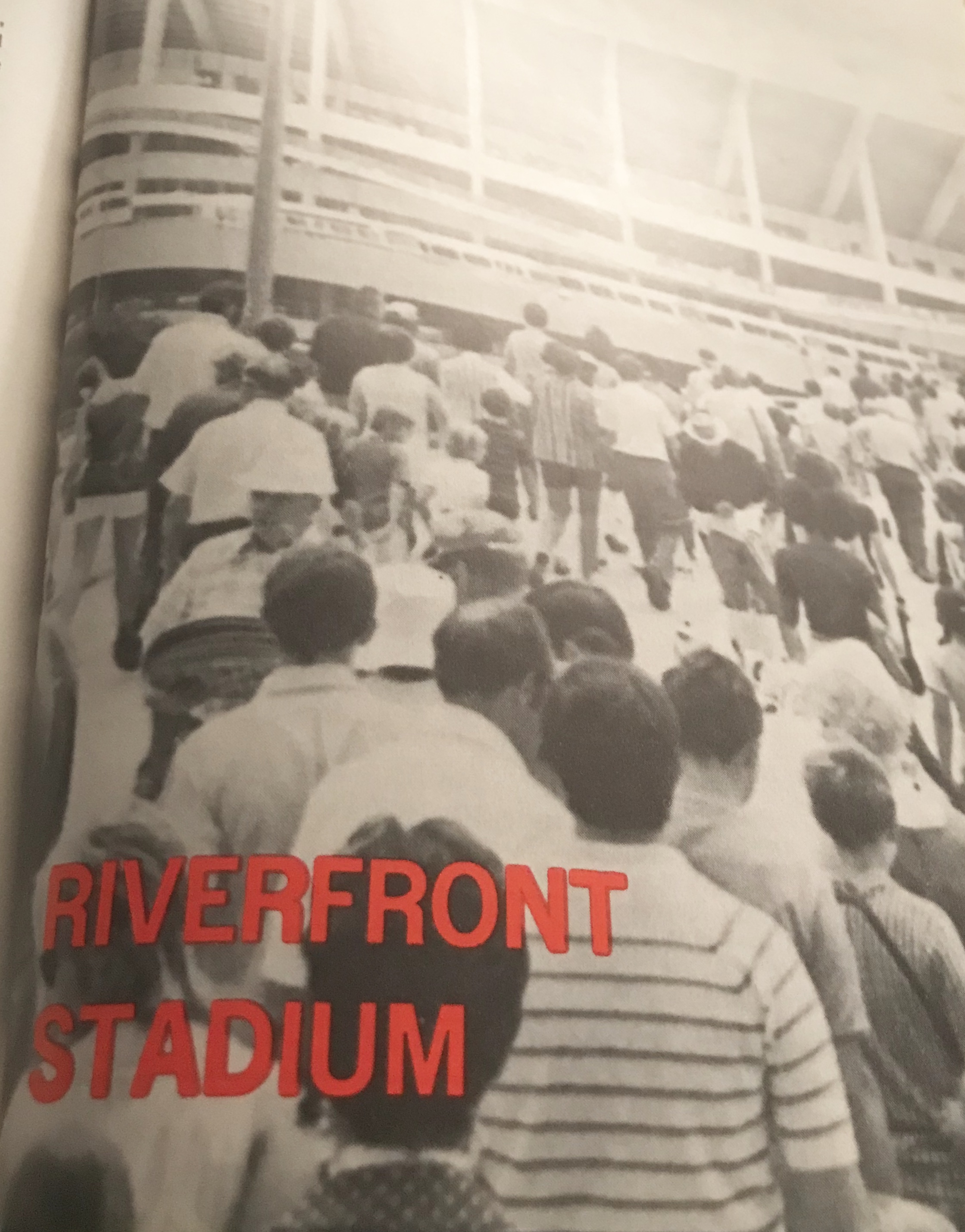 Look upon how you attired yourselves in 1976, Cincinnati. LOOK AT IT, AND REPENT. 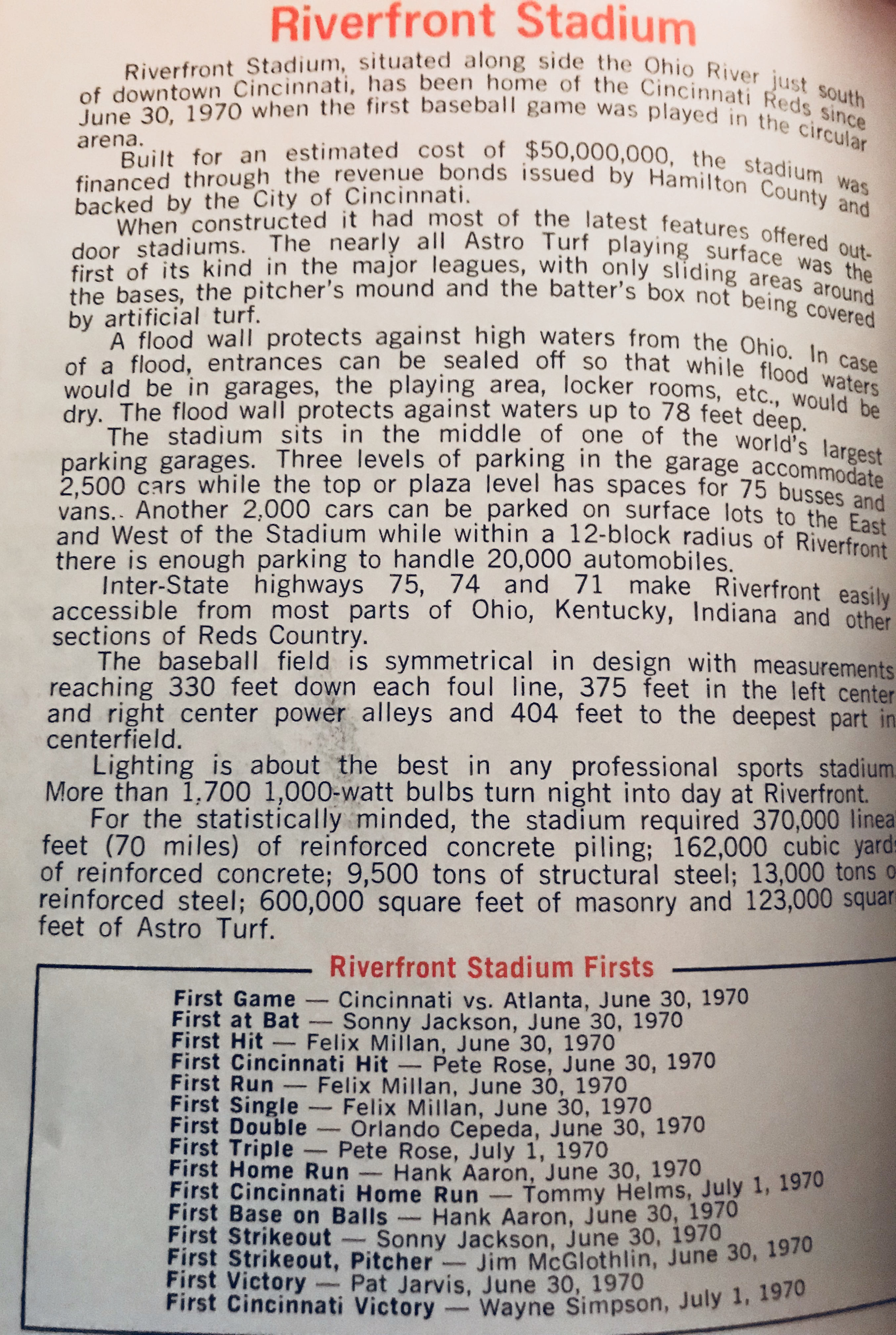 Man, they sure were proud of how much of that field isn’t actual field. I’m also pleased the architect took time to ensure the baseball diamond was “symmetrical.” 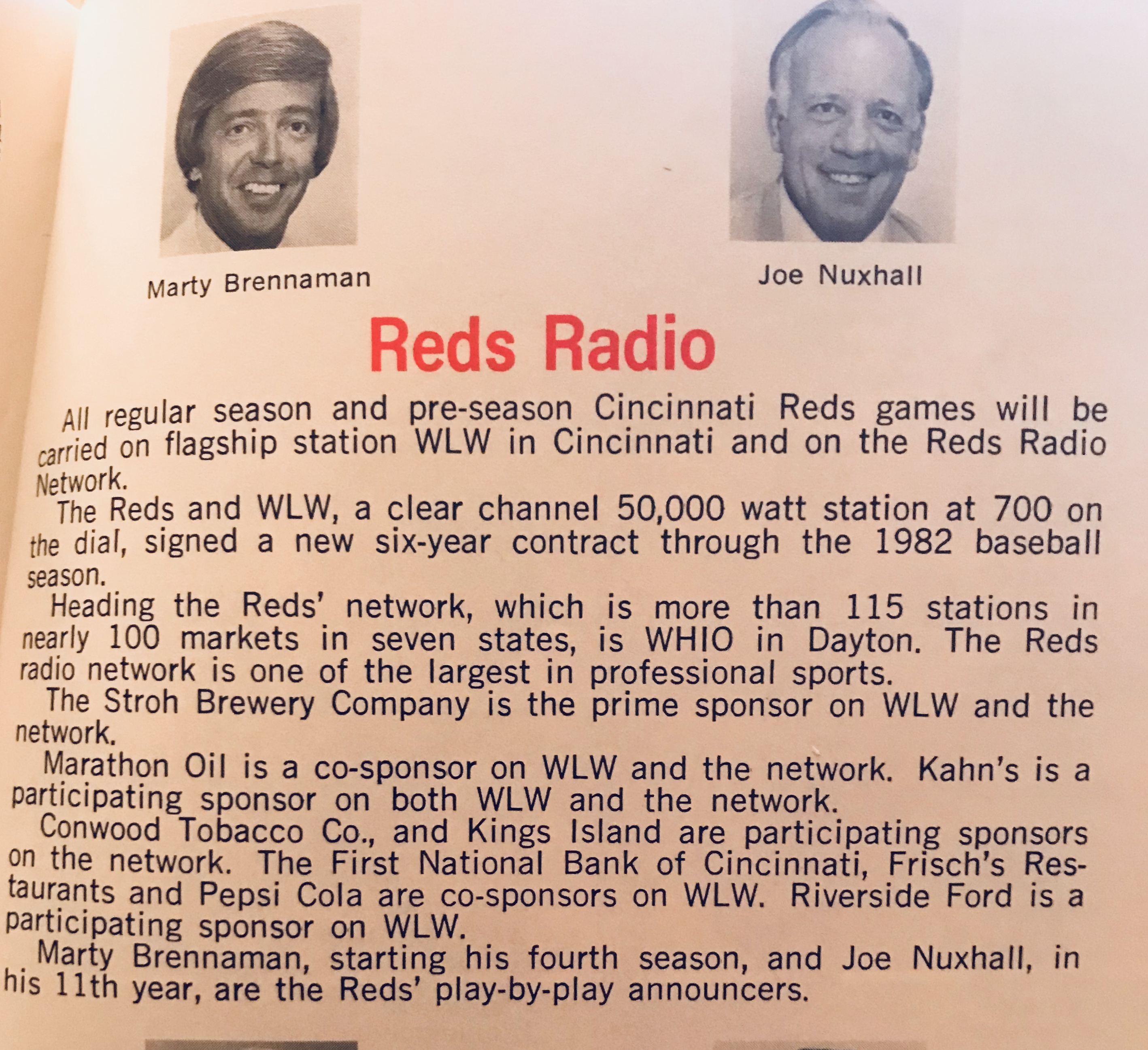 Not sure about this new Brennaman fellow. Seems over-haired. 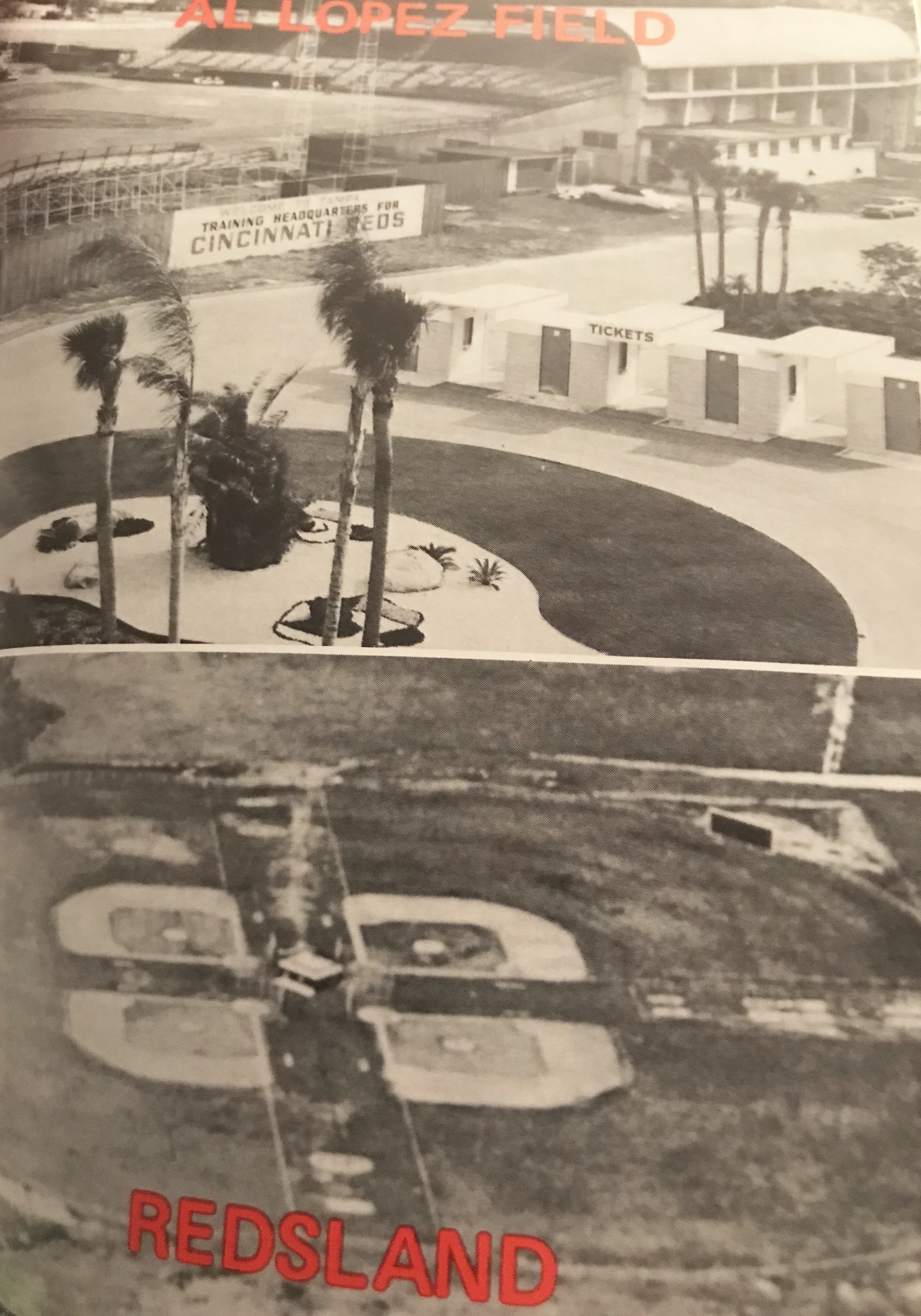 I cannot imagine why they left such a lush, magnificent paradise. 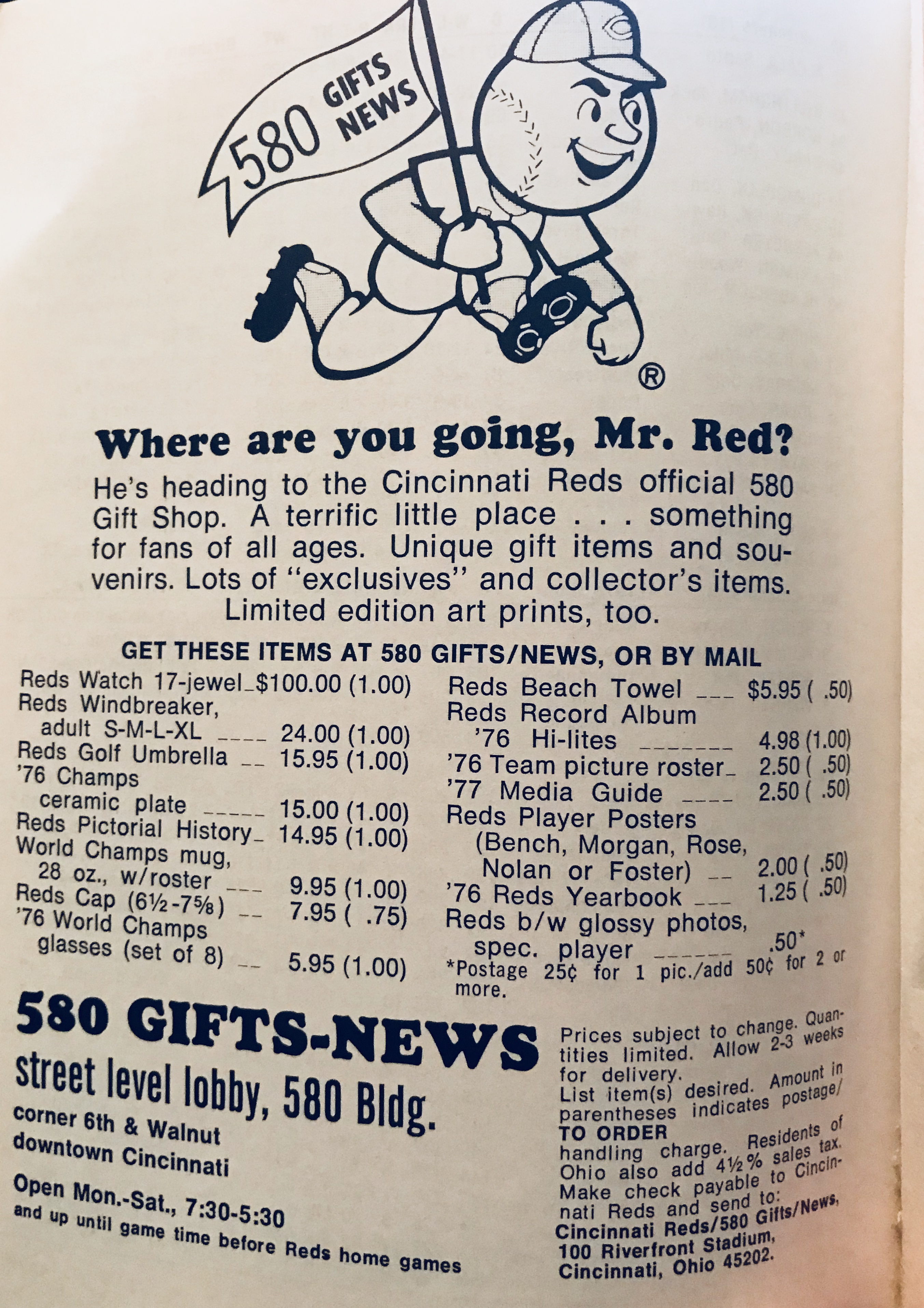 He’s going to snatch up a Reds Record Album with ’76 Hi-Lites!

I now release all of you to eBay to find the golf umbrella and 17-jewel watch.