One of the biggest stories for the Dragons in 2018, and one of the biggest stories in our team’s history, is going to be the arrival of highly touted pitcher Hunter Greene, an 18-year-old phenom from Notre Dame High School in Sherman Oaks, California. Greene attended the same high school as MLB sluggerÃ‚Â Giancarlo Stanton, former star pitcher Jack McDowell, former DragonÃ‚Â Chris Dickerson, and many famous non-athletes including Leave it to Beaver’s Jerry Mathers and actress Kirsten Dunst. His hometown of Sherman Oaks (not a huge city with a population of 52,677) has also been the home to a long A-list of movie and television stars including Jennifer Aniston, Tom Selleck, the Olsen twins, Shia LaBeouf, Melissa Joan Hart, Joseph Gordon-Levitt, and singers Paula Abdul and Demi Lovato.

Greene’s baseball skills put him on the cover of Sports Illustrated before he graduated from high school. His fastball has been clocked at 102 mph. Greene won the 2016 Home Run Derby at the Perfect Game All-America Classic, as a hitter, then was the starting pitcher for the winning team and threw the fastest pitch in the game in an all-star event featuring the top high school players in the country. 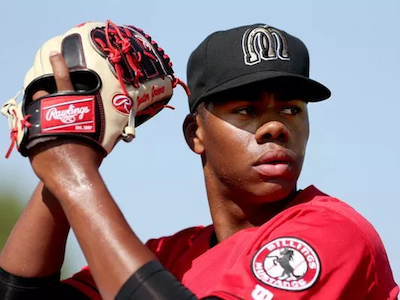 Greene was the second overall pick in the draft in 2017 and will easily be the top pitching prospect in the Midwest League when he arrives in Dayton this season. He has been called a “generational talent” by Reds General Manager Dick Williams. Washington Post writer Dave Sheinin proclaimed that Greene “may be the most intriguing, most important baseball prospect to arrive in years, if not ever.” The Dragons have had some players arrive in Dayton with high expectations over the course of their history, includingÃ‚Â Homer Bailey,Ã‚Â Jay Bruce, andÃ‚Â Nick Senzel. But there has never been anything like this.

Hunter Greene is listed by Baseball America, and most every other baseball publication that ranks prospects, as the #2 prospect in the Reds system. He is behind former Dragons third baseman Nick Senzel, who is expected to make his MLB debut with the Reds sometime this season. MLB.com ranks Greene as the 21st best prospect in all of baseball. ESPN has him at #22, and Baseball America lists him at #29.

You may ask: Why isn’t he higher?

Well, Hunter Green will not turn 19 years old until August. Every player ranked ahead of him on the Baseball America list is older and more experienced. In fact, Greene is younger than any player listed in the top 75 on Baseball America’s list. The publications generally place players in the highest slots who are closer to being big league-ready.

Hunter Greene has a grand total of four innings of professional pitching experience. The fact that Greene, with virtually no track record in the Minor Leagues, is rated in the top 30 among all prospects in baseball by the three major publications is striking. If things unfold as expected, Greene will actually become the youngest American pitcher ever to appear in a game for the Dragons when he takes the mound in Dayton this summer at age 18. The last American pitcher for the Dragons to appear in a game at age 18 was Chris Gruler, the Reds first round draft pick in 2002, who appeared for the Dragons later that same summer, less than two months short of his 19th birthday. The average age of a Dragons pitcher over the last five years has been 21.7.

Greene’s arrival date in Dayton is still a question mark. The issue revolves around the assumed desire by the Reds to limit his innings in his first full professional season to reduce the risk of injury, now or in the future. The four starting pitchers who spent the entire 2017 season with the Dragons,Ã‚Â Scott Moss,Ã‚Â Tony Santillan,Ã‚Â Andrew Jordan, andÃ‚Â Wennington Romero, finished with between 128 and 136 innings for the year. Each skipped one start during the regular season to limit their innings, but each also compiled playoff starts. Typically, it could be expected that a Dragons starting pitcher who is with the team all season would log about 140 innings.

The Reds have not expressed a desired innings total forÃ‚Â Hunter GreeneÃ‚Â in 2018, and it is unlikely that they will share that information publicly once they come to a determination. But it is almost certain that they will want to keep Greene’s innings for the year well below 140. Some observers have projected the number to be more like 110.

There are three simple ways that the Reds could limit Hunter Greene to 110 innings. One would be to decrease his pitch limit from the standard 90 for most starters to 70, meaning he would typically pitch about four innings per start with a maximum of five. A second way would be to cut his pitch limit to 50, but only for the first half of the season. Greene would work three innings per start for the first half of the season. The third method would be to hold Greene out of action for the first month of the 2018 season, and then allow him to pitch on a standard 90-pitch limit once he arrives.

If the Reds elect to employ either of the first two options, they would likely carry a reliever on the roster who is designated to “piggyback” with Greene each time through the rotation. This pitcher would be prepared in spring training to be a starter, who could provide five innings of work after Greene completed his outing each turn. If Greene does not arrive until early May, there would be no need, obviously, for that extra tandem reliever to be available. It remains to be seen how the Reds decide to coordinate Greene’s workload, but the fact remains, Greene will pitch in Dayton, it is simply a matter of when.

While Hunter Greene was a great two-way player in high school as a pitcher/shortstop, he is expected to be utilized exclusively as a pitcher in the Reds organization, at least in the foreseeable future. The demands are simply too great on any player to attempt to play a position and pitch at the professional level, when games are played seven days a week. In fact, it is not really the games themselves that make this proposition prohibitive, but the practice required.

Consider the day in the life of a minor league player. For a 7:00 p.m. game, some hitters jump in the batting cage as early as noon, putting in extra work before practice officially begins. Coaches will often schedule defensive early work on the field before regular practice begins, giving players a chance to spend time with their defensive position coach or one of the Reds roving instructors or special assistants like Barry Larkin or Eric Davis.

Middle infielders may work on getting a little quicker on the double play, or a first baseman might practice digging low throws out of the dirt. Outfielders may work on hitting the relay man or fielding balls hit into the corners. This may go on for up to 90 minutes before regular practice starts around 3:00. Then the entire team takes infield practice together, then batting practice on the field, when all elements of hitting are included, such as bunting, hit-and-run, hitting the ball to the right side to advance a runner, or getting a ball into the air to score a runner from third with less than two outs.

Meanwhile starting pitchers have their own pre-game routines. Their practice time includes conditioning to keep their legs strong between starts and one extended bullpen session every fifth day in which all pitches are thrown and extra work is given to areas of need. There is also time spent going over the opposing hitters with the catcher to determine a game plan of attack.

All of this takes place before the games even start. For one player to do everything the hitters do, AND everything the pitchers do, every day, all season, at a level that is competitive with the other players, would seem almost impossible.

It is not the in-game activities that would prevent an athlete from being a two-way player, it is the preparation, the time it takes to get ready for the games, with the understanding that since fewer than 10 percent of all players signed to a contract eventually reach the Major Leagues, every day of practice counts. A two-way player would have to go through the full day that every hitter endures, time in the batting cage, on the field working on defense, and all the drills, and then match all the preparation of the pitchers. And do it for 140 games in 152 days.