[This report was submitted by loyal Nation member and super Reds fan John Rohrig — who comments here as WVRedlegs — who has reported for RN from the Charleston caravan stop each of the last few years. Lots of great information. Thanks, John!]

Friday night, January 26, 2018, the Reds Caravan East Tour leg rolled into town. An estimated crowd of around 300 greeted the Reds. Participants on this leg of the tour this year were:

Last year, we broke news when Reds GM Dick Williams announced that Homer Bailey was experiencing elbow pain in his throwing program. Four days later, the Reds announced that Bailey would have elbow surgery and his return would be delayed further.

This year we have news, but more reassuring news than heartbreaking news like last year.
Jesse Winker will indeed get some 500 plate appearances in 2018. Many have doubted that Bryan Price would play Jesse Winker much.

Friday night Bryan Price stated that, as things stand, there would be a four-man outfield rotation of Adam Duvall, Billy Hamilton, Scott Schebler, and Winker. Price said he had worked it out on paper where he could get all four outfielders around 500 plate appearances each. Of course that provided that each player performed as expected, that there were no trades, each player stayed healthy, and there were no prolonged slumps.

Bryan Price spoke a little about one player at the table, Nick Senzel. Price said the plan is that they hope Senzel forces their hand by his play either in spring training or at AAA that would propel Senzel to a promotion. Barring an injury to Eugenio Suarez or Scooter Gennett in spring training, it sounds like Senzel will start out at AAA and will have to hit his way to Cincinnati some time in 2018.

Nick Senzel is really soft spoken and a bit on the shy side. But he is a rock-solid 210 pound athlete.

Cody Reed is a big guy. He is sporting a Paul Bunyan-type of beard. He is ready for the season and a chance at pitching redemption in 2018. He has worked hard on his mechanical issues and feels he is ready.

Big Sal Romano. If you think Cody Reed is big, Romano is immense. He looks like an NFL tight end. His shoulders are so broad, you could spell “R. Stephenson” on the back of his jersey without curving the letters in an arc. He proclaimed himself very ready for 2018 and ready to expand on his 2017 season.

It was a good evening with good weather for a change. It has snowed the last three Caravans. Many kids were in attendance to see their Reds. All the Caravan participants were extremely friendly with the kids as they went through the autograph line, especially the young players. They all went out of their way to be very cordial and accommodating with the fans.

I’ve been very disappointed in the Reds lack of off-season activity and I wasn’t going to let the Caravan stop get my hopes up for the upcoming season like I have the last four seasons. But dagnabit, it happened again. 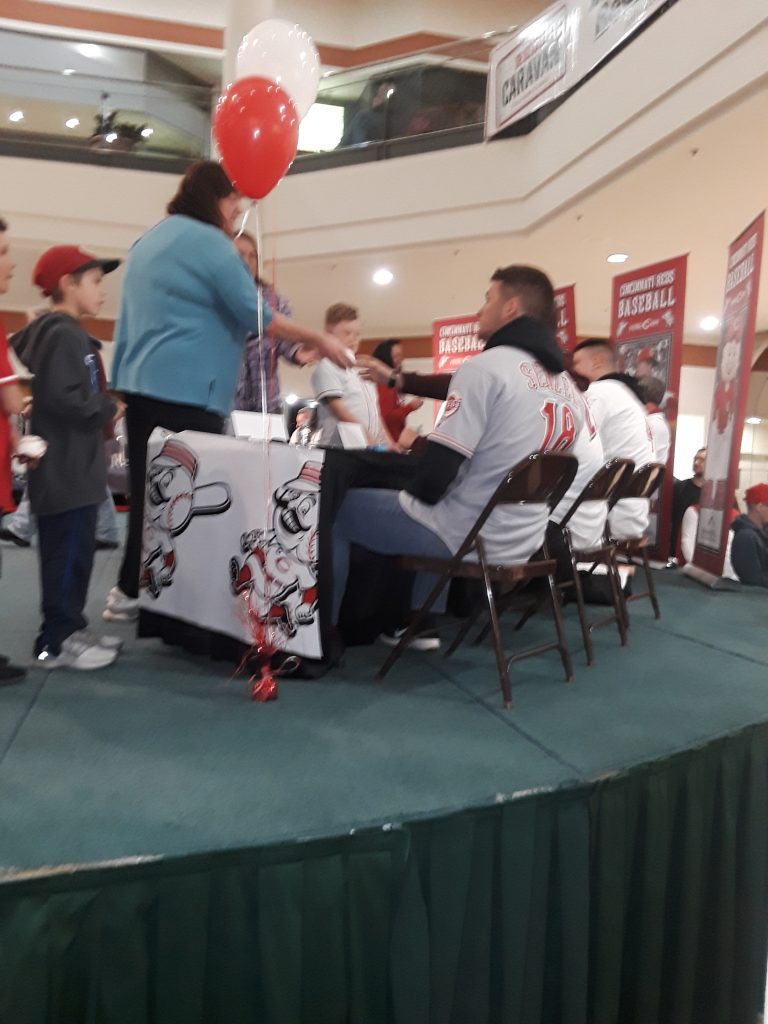 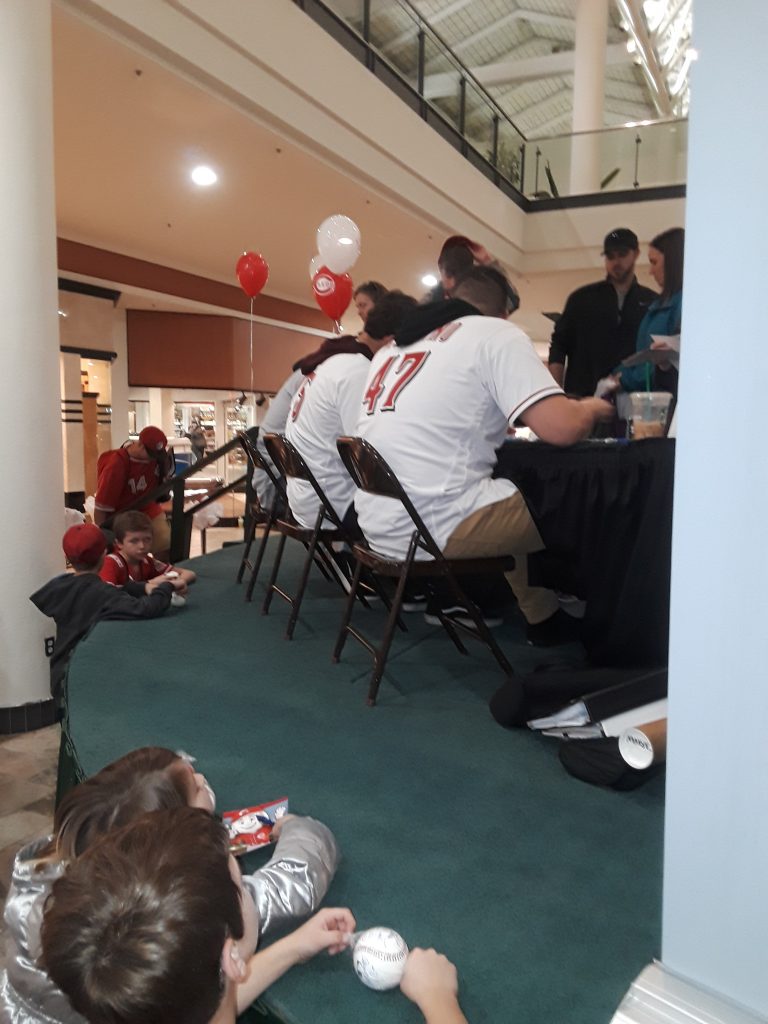 Sal Romano signing autographs with Cody Reed and Nick Senzel as some kids eagerly watch on and await their turn. 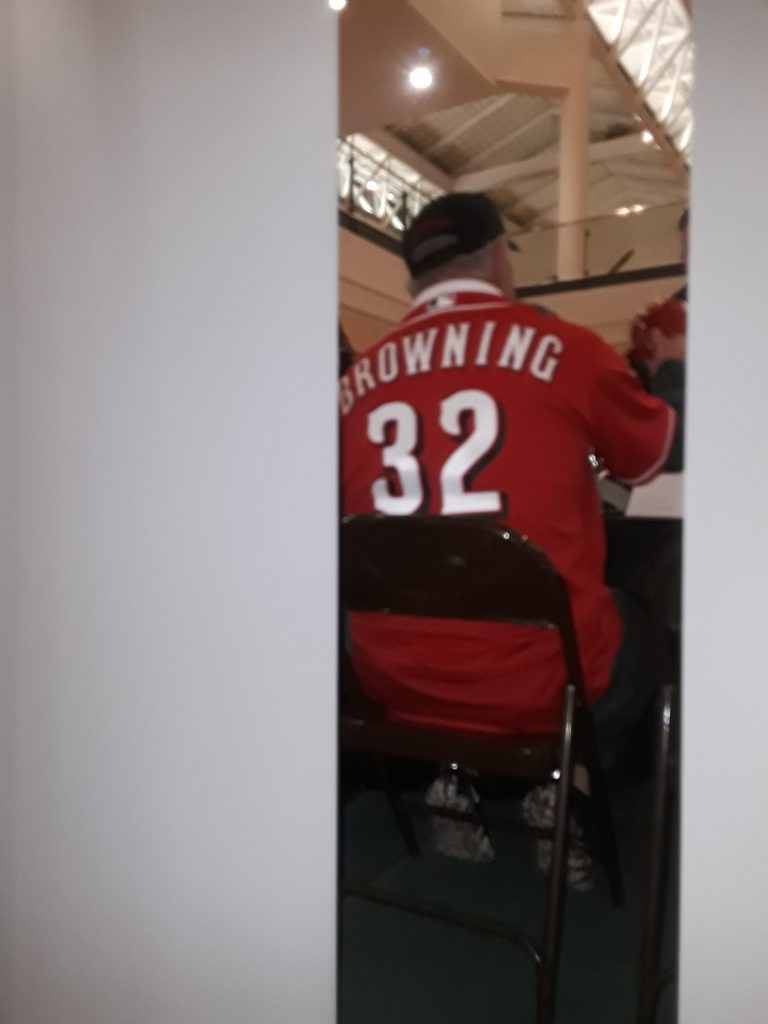 Tom Browning, the man behind the curtain, signing autographs.