This week, the Cincinnati Reds will embark on its annual caravan across four states of Ã¢â‚¬Å“Reds country.Ã¢â‚¬Â As players, coaches, executives and fans gear up for the last large event before baseball begins a new season, letÃ¢â‚¬â„¢s go back to the last event of the offseason and relive some of the moments I witnessed at Redsfest, which occurred in December at the Duke Energy Convention Center.

Redsfest is always one of my favorite events in December. It lets me talk about baseball and be immersed in baseball right about the time I start to miss it from the previous season. When I was in college, I had more free time and I would always sign up to volunteer one day of the weekend. So, when I had the opportunity to do it this year, I decided to take it.

When I arrived on Friday afternoon, I got my assignment of helping at the speed pitch game. I didnÃ¢â‚¬â„¢t think much of it at that time, but later I would learn it very well may have been the most popular game for kids at Redsfest. From about 7:30 to the 10:30 closing time, we were non-stop. While it was tiring having to retrieve the baseballs and seeing the same kids over and over again, it was still 100 percent worth it. There are two reasons why.

I was handing baseballs to kids, and suddenly a Reds security person showed up with Hunter Greene, the second overall selection in the 2017 draft. Greene threw a couple pitches and then he was going to give kids tips as they were pitching. Fans noticed and began to crowd the line, trying to be one of the lucky ones to pitch in front of the 18-year-old phenom, while their parents scrambled to take photos. With all the kids crowding around and one pushy parent trying to make sure his kid pitched while Greene was watching, the security personnel said Ã¢â‚¬Å“we only have time for one more.Ã¢â‚¬Â I had noticed one kid about 9 or 10 years old who had been waiting patiently for his turn. I told him, Ã¢â‚¬Å“YouÃ¢â‚¬â„¢re nextÃ¢â‚¬Â and made sure he would pitch while Greene was watching. If I did nothing else, I can only hope that I was able to make that one kidÃ¢â‚¬â„¢s day.

The second instance occurred later that night. I was sitting in a chair facing the speed pitch when I heard a familiar voice behind me. It was former pitcher and current Reds broadcaster Jeff Brantley. He and his security personnel had stopped to watch some of the kids pitch. In between signing autographs for those who came up to him, he watched and started yelling tips to the kids, like Ã¢â‚¬Å“keep it lowÃ¢â‚¬Â and Ã¢â‚¬Å“step *this way* when you throwÃ¢â‚¬Â, all while telling his security guy just how much he enjoys this part of Redsfest. Each time I have volunteered I can pinpoint specific instances like these two that make the Reds organization and its players one of the best.

On Saturday, I decided to take everything in as a fan. In between watching the Crosstown Shootout, I walked around the Duke Energy Center enjoying the baseball atmosphere and watching the interactions between players and fans. I saw Scott Schebler play catch with a couple of kids in the outfield of the kidÃ¢â‚¬â„¢s ball field. 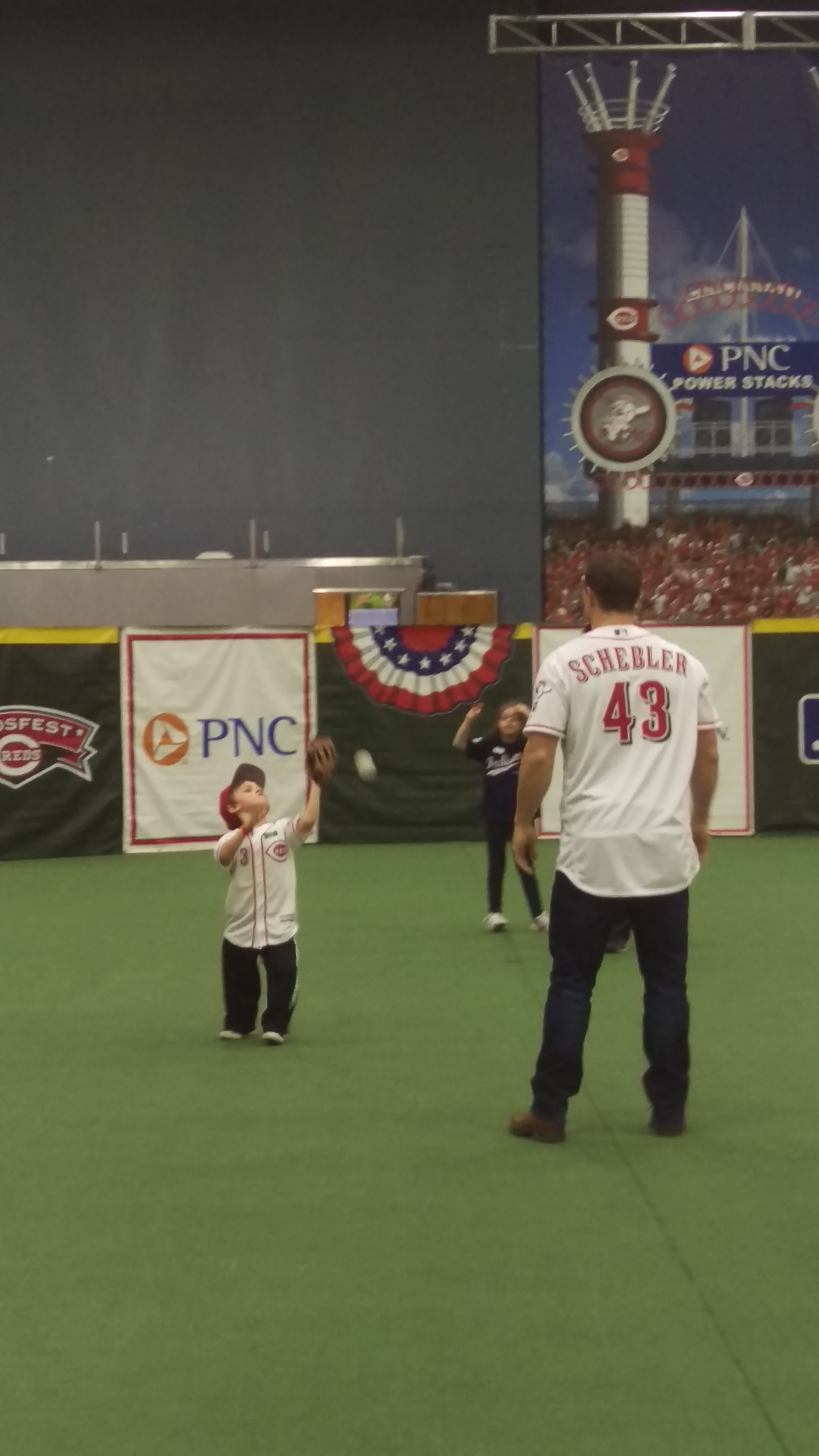 Of course, I had to sit and watch the Kids Only Press Conference with Joey Votto as well. He does it every year, and every year, he never disappoints (itÃ¢â‚¬â„¢s one of VottoÃ¢â‚¬â„¢s favorite things about Redsfest, also). This year, it was Adam Duvall, Scooter Gennett and Votto. It was fun to watch as they joked with each other (Gennett and Duvall called Votto old) and shared memories together like teammates do. 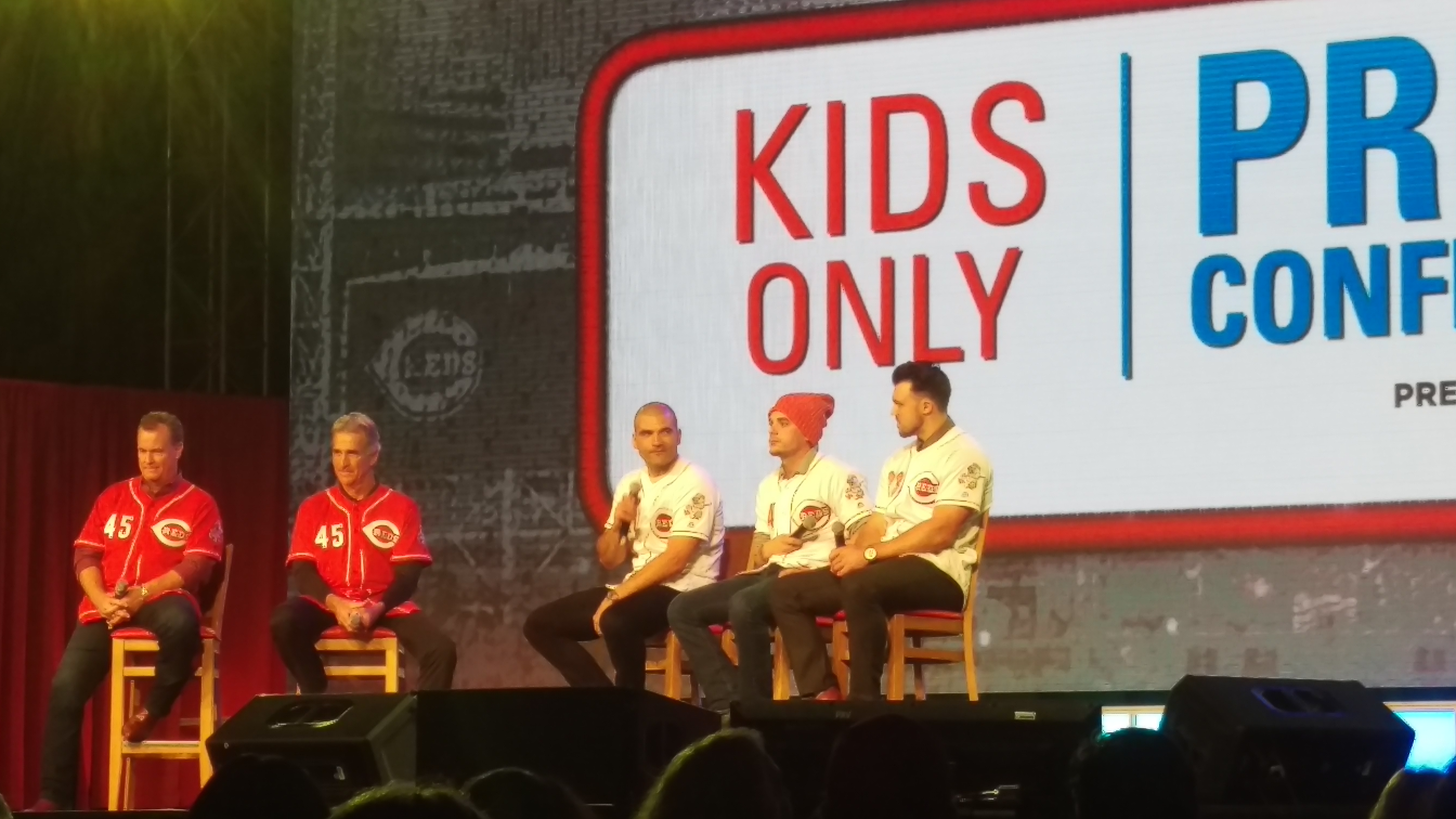 Whether itÃ¢â‚¬â„¢s Redsfest or the Reds caravan, the Reds always do a great job of keeping fans engaged with the organization all year long. Redsfest provides that opportunity for those closer to Cincinnati, and for those who live too far away to make the trip with the Caravan. It makes the fans feel like they are connected to the players, keeps baseball on their minds, and gets them excited about something that is right around the corner: spring training.