With a painfully slow and dull free agency, much of the offseason focus in baseball has centered around the Hall of Fame and which players are worthy of election. While candidates like Chipper Jones, Jim Thome, and Vladimir Guerrero are locks to achieve baseball immortality, there are a number of intriguing players who don’t stand much of a chance. One of the latter players is former Cincinnati Reds third baseman Scott Rolen.

Rolen spent only three-and-a-half of his 17 seasons in Cincinnati, but he’s the Reds’ best hope at having a Hall of Fame player until Joey Votto retires. So let’s talk about him!

More specifically, is he worthy of election?

The first thought that pops into your head when you think of Scott Rolen may not be “hall of famer,” “superstar,” or “elite.” It’d be easy (though lazy) to dismiss him as a Cooperstown candidate based on that alone. And if you only look at the traditional counting stats, like many voters still do, you may be inclined to dismiss his candidacy altogether. Rolen hit 316 home runs (124th all-time), knocked in 1,287 (120th), and batted .281 (617th) while spending time with the Phillies, Cardinals, Blue Jays, and Reds. All impressive, above-average marks, but not elite when compared to other superstars of his era like Albert Pujols and Alex Rodriguez. Fair enough — but those numbers don’t come close to telling the whole story.

Some, like Steven Martano at Beyond the Box Score, say Rolen is not worthy because he never led the league in any major offensive categories.

“What is most striking about Rolen’s baseball-reference page is the simple fact that he never led the league in anything. Ever. Over the course of 17 years, Scott Rolen always played at best, second-fiddle to someone else in literally every statistical category listed.”

While this argument isn’t incorrect, it is, again, incomplete. If the Hall of Fame only granted entry to the biggest of superstars, it’d be a fraction of the size it is now. Fortunately, leading the league in a few select categories or the three big traditional offensive stats (AVG, HR, RBI) aren’t prerequisites for being voted into the Hall of Fame. If they were, players like Ozzie Smith, Luis Aparicio, and Bill Mazeroski probably wouldn’t have a spot.

What pushed those players into the Hall of Fame was defense, and that’s where Rolen stands out from the crowd. He complemented his solid, middle-of-the-order bat with some of the best glove work the third base position has ever seen. Like a vacuum, he sucked up nearly every ball that came his way at the hot corner, and his strong arm allowed him to throw out baserunners whether he was on his knees or on the foul side of the third base line. And few other third basemen have ever made the charging, barehand play on bunts and dribblers look so easy.

Since 2002, when many of today’s go-to defensive metrics began being tracked, Rolen trails only Adrian Beltre in defensive runs saved (114) and ultimate zone rating (109.0), while sitting in fourth in ultimate zone rating per 150 games (13.3) behind Manny Machado, Corey Koskie (!?), and Beltre. And keep in mind these numbers don’t account for the first six years of Rolen’s career. He gained the respect of his peers and coaches for his defensive work, earning eight Gold Glove awards during his career, including one with the Reds. Only Brooks Robinson (16) and Mike Schmidt (10) have more among third basemen.

Defensive metrics and awards don’t tell the whole story, of course, but even if you’re a believer in the eye test alone, you can’t deny Rolen’s wizardry in the field.

(Of note: poor Jerry Hairston Jr. got robbed twice by Rolen in this video.)

Let’s not pretend Rolen was a slouch with the bat, though. Plenty of great defenders have never sniffed the Hall of Fame because they were lousy hitters. Rolen does not fall into that category. He topped 20 home runs 10 times and broke the 30 threshold thrice. He hit for average. He demonstrated discipline at the plate (10.6 BB%). He didn’t strike out much (16.6 K%). He sits just outside the top-50 in career doubles (517). All makings of an above-average hitter (122 wRC+) that pitchers weren’t looking forward to facing on a nightly basis.

Here’s how he compares to his peers at third base: 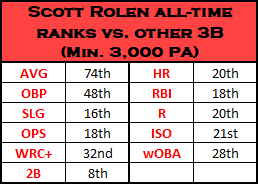 Solid numbers, to be sure, but not necessarily Cooperstown-worthy on their own. That being said, Rolen’s career marks compare very favorably to former Cubs third baseman Ron Santo — who was elected to the Hall of Fame by the veteran’s committee in 2012 — as FanGraphs’ Craig Edwards pointed out.

Add it all up and Rolen’s well-rounded game was worth 70.1 fWAR in his career, 10th among third basemen in MLB history and 58th all-time. Per Jay Jaffe’s JAWS rankings, which incorporates Baseball Reference’s calculation of WAR — in which Rolen ranks 98th all-time — the former all-star is also 10th at his position. Every third baseman ahead of him in both WAR and JAWS is either already in the Hall of Fame (Schmidt, Eddie Mathews, Wade Boggs, George Brett, Santo, Robinson, Paul Molitor) or will likely be (Rodriguez, Jones, Beltre).

At the end of the day, Rolen’s position will heavily play to his advantage if he’s enshrined in the Hall of Fame Plaque Gallery. Of the Hall of Fame’s 257 players, only 16 of them were primarily third baseman, the fewest number of inductees at any position. That, perhaps, lowers the bar required for entry.

If you like accolades, Rolen has plenty of those, too. In addition to his Gold Gloves, he was voted NL Rookie of the Year in 1997. He made seven all-star appearances, including two with the Reds. And he had a fourth-place finish in the 2004 NL MVP balloting, a season in which he was worth 9.0 fWAR. Not many players have a season that good and finish fourth. He also received MVP votes three other times.

So where does all that leave Rolen in terms of Hall of Fame worthiness? While he isn’t a no-doubt, slam-dunk candidate, he has a compelling case as one of the most complete players to ever man third base. The voters who look at benchmarks like 500 home runs, a .300 batting average, and 3,000 hits probably won’t ever check the box next to his name, which is a shame but not particularly surprising.

As more writers who embrace sabermetrics start to earn votes, however, Rolen should gain steam. As of this writing, he’s only polling at 10.7 percent among 174 public ballots, per Ryan Thibodaux’s tracker. He has no shot at election this year or next year or (probably) the year after that because of the silly 10-vote limit causing a backlog of worthy candidates. But if he can stay above the 5 percent threshold required to stay on the ballot, perhaps he’ll gain momentum in the coming years, just like Tim Raines and Edgar Martinez have in recent elections.