When we were first married, in the middle of the night, Josh the Pilot and I had one of those intense, couple-y, scary, I-would-never-say-these-things-at-two-in-the-afternoon conversations. You know the kind I mean. We talked about careers, our relationship, what can be done about the current state of country music. I became upset at one point and he said, “Look, we’re both tired, it’s one in the morning, and this is a conversation in the dark.” And then I went to sleep and he went to sleep, for he was right, of course.

This is what needs to happen at winter meetings, only with less sharing of blankets and more discussion of on-base percentage. We know a man is serious when he slides the name of a Silver Slugger into a conversation at 2 AM; not so much at 8.

I think world peace negotiations also need to take place in the dark, in a car, in the rain. You’ll admit things to shadows that you wouldn’t to a blue sky or Sylvania bulb. It’s like when one of my nephews used to burrow his face into the corner of the couch, shrieking smugly (I tell you, a one-year-oldÃ‚Â canÃ‚Â shriek smugly), because we wouldÃ‚Â never find him now that he’d removed us from his line of sight. After his brother was born, we bonded mostly in the twilight, himÃ‚Â scrunched in a little ball on my chest so that if he rolled off, it was his fault. Babies tend to be angrier in broad daylight, a trait I never quite outgrew. Perhaps CEOs haven’t, either.

What we say in the dark has weight, falls heavily to the ground, unlike daytime sentences; and indeed words of the night float away in the morning, so that we don’t trip on them on our way out of bed.

It is no coincidence that baseball, lovely baseball, is our only sport primarily played in the dark, for here is when it is at its most lyrical. Basketball– meh. That’s the problem with basketball. Harsh lights and buzzing. 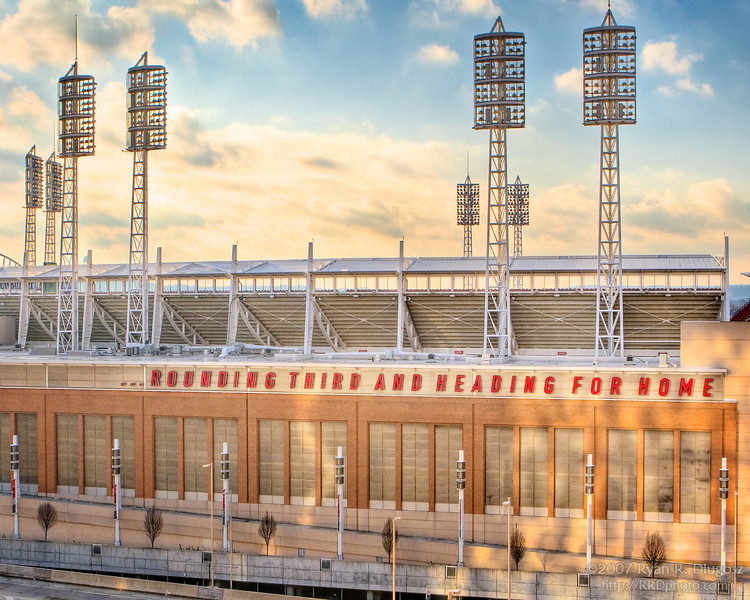 An entire broad generation of Reds fans counts as friends the voices of Joe Nuxhall and Marty Brennaman. For this third-grader who dreaded nothing more than the next morning at school, their pitch counts were comforts in the hours when I was too lonely to sleep, especially after my big sister moved all the way across the hall. Night games on the West Coast were most welcome; that way, he was sure to be there as I fell asleep at eleven-thirty, midnight, one AM. That is why I was sad but not sorrowing when Nuxhall died; we quoted his signoff line in great red letters on our new stadium to allow his words to quietly shadow the evening hours. He lives on, year round, in the darkness.

I bet you can trace the most intensely emotional moments of your existence to the deep cavern of some night. The specifics are likely lost to the rocking waves of your everyday life, and you may not have decided to leave a job, resolved to callÃ‚Â him, or cured athlete’s foot.

But I bet you thought about it.