One the surface, looking at Scott Schebler’s 2017 vs 2016, his production appears to be about the same. Some notable similarities include his wRC+, defense, and baserunning. He had a higher WAR, but then, he also saw more playing time, so a higher WAR isn’t unexpected.

If we look deeper, however, we see some significant differences, notably in stats such as AVG, OBP, SLG, BABIP,Ã‚Â  ISO, and K%. These, of course, are many of the key components of Schebler’s offensive performance.

His BABIP could have been affected by his performance against the shift. In 2016, Schebler had 124 plate appearances hitting into a shift, and produced a .339 BABIP and a wRC+ of 104. In 2017, in 221 plate appearances, those numbers were .249 BABIP and 44 wRC+. Another factor would be more strikeouts and home runs, which are not balls in play and do not get factored in, and fewer singles, doubles and triples. In 2016, 23% of ScheblerÃ¢â‚¬â„¢s plate appearances ended with a hit in play, whereas that number was only 17% in 2017, driven mostly by a drop in rate of singles. Ã‚Â At the same time, he hit 21 more home runs and saw his strikeout rate rise by 2.6 percentage points.

Speaking of more home runs and strikeouts, you may have heard over recent years that baseball has been gravitating towards the three true outcomes (walk, strikeout, home run) — here in Cincinnati, we refer to this as The Adam Dunn. The 2017 season was no exception, as we heard Ã‚Â a lot of rumors, claims, and analysis surrounding a different ball leading to a home run spike. We also heard about players taking steps to improve their ability to hit the ball in the air, forcing the term “launch angle” into even a casual baseball fanÃ¢â‚¬â„¢s vocabulary. Scott Schebler was pretty clearly invested in these changes and the results showed up in the numbers. 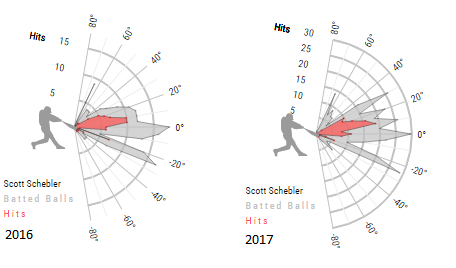 Looking at these numbers, it is reasonable to wonder why we didnÃ¢â‚¬â„¢t see more overall production from Schebler. After all, his wRC+ was 100, which is exactly average and just below his 2016 production of 101. Unfortunately, another big storyline this year was a shoulder injury that Schebler suffered while making a diving catch on June 3. Schebler himself said he regretted playing through the injury that ultimately landed him on the DL. While it is impossible to know for sure how much this affected his performance, a wRC+ of 20 for the entire month of July took a significant hit on an otherwise productive campaign.

In summary, Schebler clearly made some changes to his offensive approach and the individual metrics bear out some strong improvements. He really improved his power and ended the year with 30 home runs and a .252 ISO, the 21st highest in the league, sandwiched between Joey Votto (18) and Zack Cozart (22). Despite the injury and second-half drop off, Schebler was a key component to the Reds offense for much of the year. The Reds will be hoping for a healthy Schebler to post a breakout year in 2018 during his age-27 season.