Going back to the start of the 2017 season, we can think of three questions that every Reds fan could have been wondering about Zack Cozart. Would he stay healthy? Would he continue to build upon his improvements in the previous injury-shortened seasons? And what would he name his new donkey?

Okay, that last one was probably not on the minds of anyone because the thought of Zack Cozart making the All-Star Game (and earning his very own donkey) was a fun thought, but almost a pipe team in reality. However, despite not being entirely healthy, he did manage to improve his plate approach, post stunning offensive numbers, and grow into a true all-around threat for the Reds, accumulating 5.0 fWAR and earning his first All-Star selection.

Dealing with quad injuries on both legs that resulted in two DL stints and cost him roughly a month of the season, Cozart ended up playing essentially the exact same amount as he did in 2016. The major difference is clearly what he was able to do with that playing time. Every single offensive stat except base running improved and for the most part they were massive jumps. While he saw some decline on defense, he still provided positive value. All in all, he doubled his WAR for the year, and when broken down to WAR per game played, Cozart ranked 10th in MLB, two spots ahead of Joey Votto. 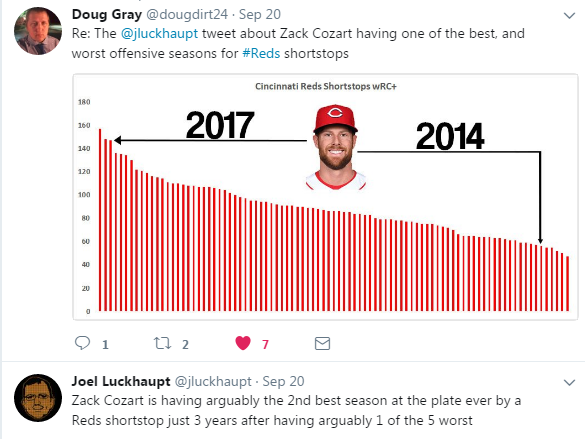 It is easy to see where the biggest change in CozartÃ¢â‚¬â„¢s game came from; it’s the same place as his donkey, Joey Votto. Many of the Reds players seemed to take notes from the former MVP this year and Cozart was no exception, as his plate discipline numbers all saw improvement.

Said Cozart in a mid-season interview with C.Trent: Ã¢â‚¬Å“I feel like I donÃ¢â‚¬â„¢t give away at-bats anymore. I think that comes from hearing Joey Ã¢â‚¬â€œ everything countsÃ¢â‚¬Â. He also said, Ã¢â‚¬Å“IÃ¢â‚¬â„¢m in no rush to get the at-bat over with,Ã¢â‚¬Â which a statement that certainly showed itself in the numbers. Zack increased his pitches seen per plate appearance from 3.71 in 2016 to 4.19 in 2017, easily the highest of his career and good for 16th in baseball. Cozart was also among the league leaders in terms of points dropped off his O-Swing% and Swing%, which in turn increased his BB% by 4.9 points (3rd in MLB, right behind Suarez) and helped boost his OBP by .077 points, good for 2nd in the majors. 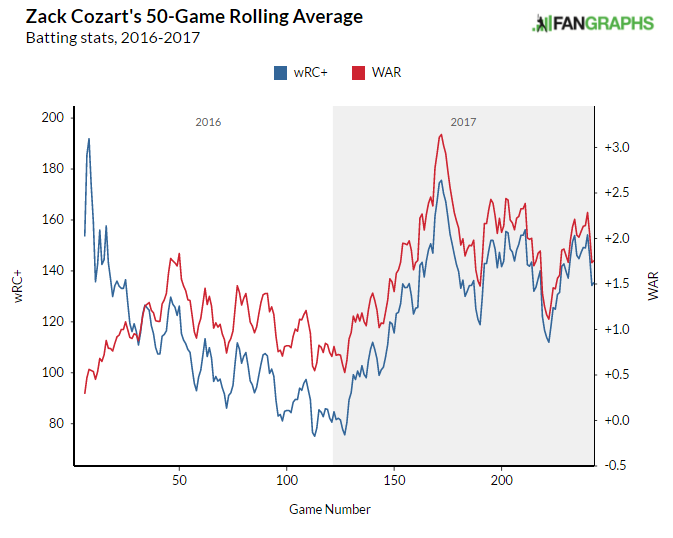 As mentioned above, one of the only downsides to 2017 for Zack was his mobility as he was undoubtedly affected by injuries. Defensively, he took a slight hit, and while he was still a top ten fielding shortstop according to Fangraphs, his value was much more driven by his offense, which is a complete 180 from the rest of CozartÃ¢â‚¬â„¢s career. Even in 2016, his WAR numbers were buoyed by defense when the offense started to slide later in the year. In 2017, his defense becomes almost a non-factor as the fatigue and injuries started to take their toll. However, a slight drop in defense is a price the Reds gladly accepted for a huge increase in overall production.

Did Cozart stay healthy this year? Not quite, but he managed to fight through the injuries that did come and took the field as often as he could. Did he build upon his previous improvements? Without a doubt, yes. There really isnÃ¢â‚¬â„¢t enough you can say in that respect. And most importantly, of course, is the final question: what would he name his donkey?! Well, the Cozart family landed on Donald, a tribute to his son CooperÃ¢â‚¬â„¢s favorite cartoon (Donald Duck).

But the real story here is that Zack Cozart actually earned a starting spot on the National League All-Star team. You really could not have written a better story. After coming out hot to start the 2015 season but going down with the brutal knee injury, it was great to see Cozart not just rehab and get back to playing regularly, but also to make substantial gains in his production. It was really a great bright spot for the Reds this year.

No matter what happens with Cozart going forward, this was certainly a year to remember.