The Reds’ position players overall performance in 2017 was anything but a disappointment. The unit as a whole took a considerable step forward as several players put together career years. Perhaps none was as important to the long-term success of the franchise as Eugenio Suarez. SuarezÃ¢â‚¬â„¢s 2017 was a definitive breakout year both at the plate and on the field. When you consider that he just turned 26 in July, it makes his performance this year all the more impressive. (Note: Suarez turned 26 in July so 2017 was his age 26 season, but FanGraphs’ filter accounts for the playerÃ¢â‚¬â„¢s age to start the season, so for data purposes this will be his age 25 season).

Suarez improved in every relevant metric and many were not just baby steps. One of the most notable and arguably most important was a 5.2 point increase in his BB%, finishing at a 13.3%, good for 17th in the majors. His OBP, ISO and wOBA all took significant jumps forward as well and turned him from a slightly below average offensive player to a well above average threat. His K% improved slightly but still sits worse than the league average of 21.6%. However, that is a compromise the Reds will gladly take considering the overall body of work.

Defensively, Suarez made similarly huge strides and flashed excellent leather in the hot corner. Even if you do not trust defensive metrics, it was not hard to see the improvement from 2016 when he struggled at times to learn his new position. FanGraphs quantified his improvement to be about 4 times more valuable this year. Add it all up and his fWAR for the season was 4.1, good for fifthÃ‚Â in the NL among third basemen. 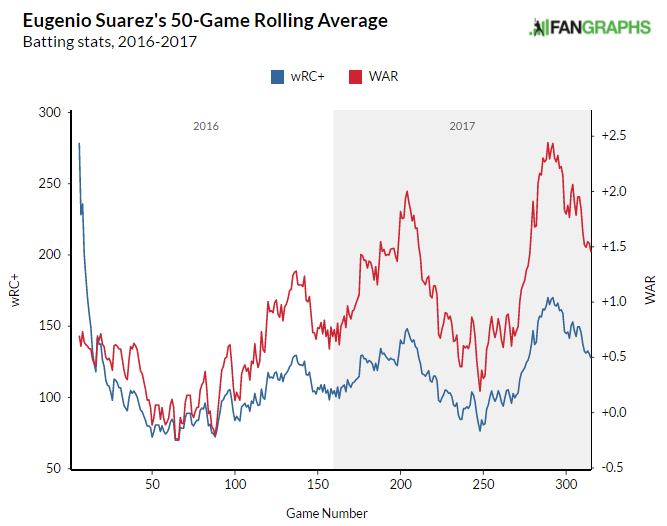 Regardless of how you feel about using WAR to judge a player, looking at it in unison with wRC+ can show just how much Suarez relied on his offense for his value in 2016, compared to his massive improvement and development as an all-around player in 2017. He’s produced significant increases in both metrics over the 2 year window.

Another important aspect of his season was how it seemed to be broken into three distinct segments. While there was a noticeable slump throughout the middle of the season, it is encouraging to see how he was able to turn it around and reach an even higher peak than he hit at the start of the season.

SuarezÃ¢â‚¬â„¢s batted ball profile showed improvements and regression, but overall not much change. BABIP was almost identical, as was FB%, though his HR/FB increased. Suarez hit 5 more home runs this year, but did not appear to be an intentional attempt at hitting more fly balls like many others throughout the league. He did hit fewer ground balls and more line drives than but also had a higher rate of soft hit balls with the 28th highest rate in the league at 20.7%, something to keep an eye on going forward.

Plate discipline numbers are also close to 2016 except for a few notable exceptions. Swings at pitches outside the zone decreased 2.4 points down to 24.2%, good for 19th in MLB and just ahead of some noteworthy players, including Paul Goldschmidt (21st), Todd Frazier (27th), and Justin Turner (28th). This drop coincided with a drop in contact on pitches outside the zone, though overall Contact% was basically the same. Suarez’s swinging strike percentage was slightly down, so although his K% was up, it was not because he was missing more balls, which is good news.

Mark Sheldon spokeÃ‚Â with Suarez in late May and discussed the third baseman’s approach at the plate, coming off a strong week after his first down stretch. “When you’re in trouble, it’s more mental than mechanical. I knew it wasn’t my swing … I stuck with my setup and approach, and the results are in the game”, Suarez said. He also spoke to his two-strike approach, mimicing #19 and choking up to shorten his swing and put the ball in play.

Price chimed in with praise for Suarez, calling it “chasing a process that will lead to more consistency. And that’s maturity.” Joey Votto himself compared Suarez’s all-around improvements to All-Star Todd Frazier and said “every aspect of his game has gotten better.” There is no denying that but it is still impressive to hear from the Reds skipper and leader, even in the midst of an up-and-down start to the year.

Overall, there is a lot to be encouraged about with Eugenio Suarez’s improvements in 2017. Add in the fact that Suarez was only 25 when the season began and his future gets even more exciting to think about.

Since we love our historical perspective here at RLN, I will throw out a couple impressive rankings for SuarezÃ¢â‚¬â„¢s 2017 campaign, according to fWAR. Among the Reds all-time list of age-25 seasons, this was the 13th best in history, trailing the likes of Eric Davis (1st), Frank Robinson (2nd), Johnny Bench (6th), Felipe Lopez (10th!), and Joey Votto (11th). Narrowing the scope to Reds 25-year old third basemen, he jumps up to 3rd, just ahead of Tony PerezÃ¢â‚¬â„¢s 3.6 fWAR. And finally, among all National League third basemen in their age 25-year since 1960, Suarez had the 17th best season.

Eugenio Suarez may not be a superstar just yet, and will never receive the national attention of Nolan Arenado or Kris Bryant, but he has just entered the prime of his career and has potential to remain in some strong company during the upcoming years.