February 2017: The Reds finished 68-94 last season, fifth place in the National League Central division. The clubÃ¢â‚¬â„¢s starting rotation enters 2017 with considerable uncertainty: (1) veteran pitcher who didnÃ¢â‚¬â„¢t pitch until June, but who started every turn afterward; (2) quality veteran who was injured last season, hopes to return to full form; (3) promising, durable young pitcher with a sub-4 ERA; (4) young, top prospect who got around 10 major league starts; (5) young pitcher who soared through teamÃ¢â‚¬â„¢s system and got a handful of starts, (6) another young pitcher with promising potential, and (7) a bullpen pitcher, one of the best arms on the team, who hopes to become a starter but received no opportunity.

October 2017: The Reds finished 68-94 last season, fifth place in the National League Central division. The clubÃ¢â‚¬â„¢s starting rotation enters 2018 with considerable uncertainty: (1) veteran pitcher who didnÃ¢â‚¬â„¢t pitch until June, but who started every turn afterward; (2) quality veteran who was injured last season, hopes to return to full form; (3) promising, durable young pitcher with a sub-4 ERA; (4) young, top prospect who got around 10 major league starts; (5) young pitcher who soared through the teamÃ¢â‚¬â„¢s system, got a handful of starts, (6) another young pitcher with promising potential, and (7) a bullpen pitcher, one of the best arms on the team, who hopes to become a started but received no opportunity.

A major league baseball team has 162 starting pitching assignments to hand out over the course of a single season. Those opportunities are a scarce, valuable resource for the organization. Here is how the Reds allocated their starts in 2017: 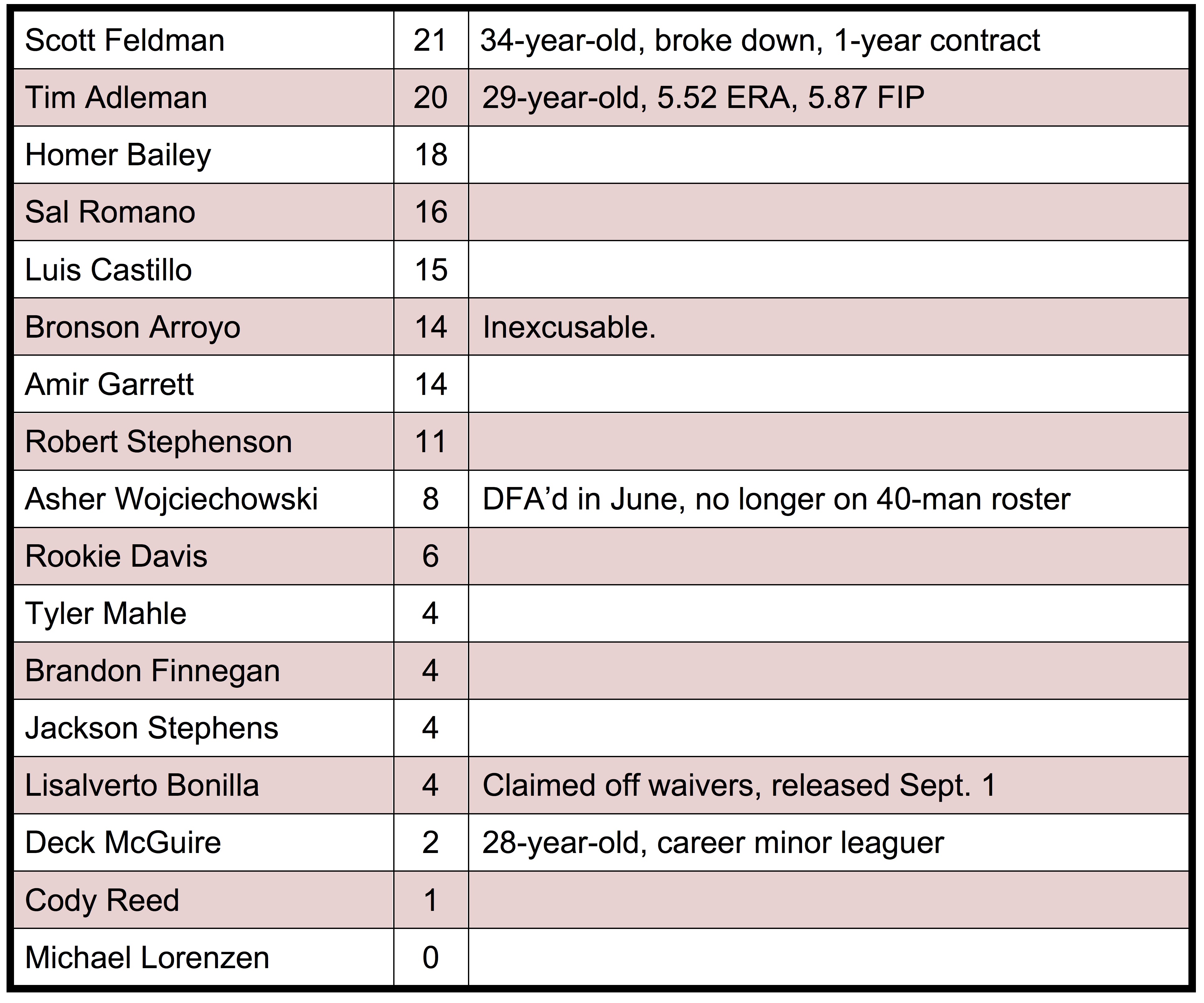 If you take the pitchers with comments in their row and add up the number of starts you get 67, which is 41% of 162. The Reds wasted all of that precious opportunity last year.

Tilt your head sideways, peer out one eye and you might see Scott Feldman as a veteran presence. Indeed, Feldman ate innings. He also devoured opportunity. But even if you place Scott Feldman in the reasonable-to-start category, that still leaves 46 wasted starts or 28% of the total.

The front office should have put Bronson Arroyo on contract for one game, let him play his concert and then retire as a Reds player. Instead, they afforded 40-year-old Arroyo more opportunity to start than Robert Stephenson, Cody Reed and Michael Lorenzen — combined. As you shake your head at that last sentence, also take in that the Reds gave more innings to Tim Adleman than to any other pitcher in 2017.

That’s the opposite of a clear-eyed, well executed rebuilding process.

Think how much farther along the club could be now if they gave twelve of those 67 starts to Michael Lorenzen after the All-Star break, another 15 to Robert Stephenson and 25 to Cody Reed. Amazingly, that still leaves 15 starts to divide between Sal Romano and Amir Garrett. If even one of those five pitchers learned from their enhanced experience and showed meaningful progress, the Reds would be much better off today.

After a solid performance in Goodyear, Cody Reed began the season assigned to the Reds bullpen. Reds management was sending Reed and Stephenson a message by putting Rookie Davis in the Opening Day rotation.

Reed relieved in four April games, giving up no hits and no runs in 8 innings. Yes, he walked four Ã¢â‚¬â€œ all in his first appearance Ã¢â‚¬â€œ but he also struck out 9.

Reed was finally given an opportunity to start. On April 22, he faced the Chicago Cubs. The Cubs had led the major leagues in walks in 2016, so it was probably the worst match-up possible for Reed. He didnÃ¢â‚¬â„¢t pitch well. And that was it. ReedÃ¢â‚¬â„¢s one and only start of the 2017 season took place in April.

Cody Reed began 2017 as the Reds #2 prospect. Yet, even in September, when the club turned to the likes of Deck McGuire, Bryan Price couldnÃ¢â‚¬â„¢t see fit to give Reed another chance or two.

“A year wasted in development”

The outcome of the 2017 season for the Reds was never in doubt. The prospect of another losing season was obvious to the team and its fans long before Sean Casey served as Grand Marshal for the Opening Day Parade.

What we wanted was an organization competently executing the latter stages of a rebuilding process. On the pitching side, that meant a single-minded devotion to opportunity and experience for the clubÃ¢â‚¬â„¢s valued youngsters. Not dopey nostalgia or play pretend that the Reds were a 2017 contender. The Dan Straily trade in January appeared to be a breathtaking indication that the organization understood that. Or so we hoped.

Instead, what followed was an unfocused mess. One step forward, one step in a different direction. Luis Castillo, then Lisalverto Bonilla.

Ã¢â‚¬Å“When we looked at the pitching staff last year on the last day of the season, weÃ¢â‚¬â„¢re looking at almost identical to this year,Ã¢â‚¬Â said Jeff Brantley, as he spoke his mind before the final game of the 2017 season.

Who is to blame for the pitching staff’s disappointing lack of progress?

From a certain point of view, the answer is simple. ItÃ¢â‚¬â„¢s the pitchers themselves. They have to earn opportunity and failed to do so. Cody Reed and Amir Garrett had long stretches of ineffectiveness. On the other hand, Luis Castillo and Tyler Mahle knocked the door down.

(Although one wonders how long CastilloÃ¢â‚¬â„¢s emergence would have been delayed if Bronson ArroyoÃ¢â‚¬â„¢s shoulder hadnÃ¢â‚¬â„¢t fallen off.)

But placing accountability solely on 23-year-old pitchers isnÃ¢â‚¬â„¢t just simple; itÃ¢â‚¬â„¢s too simple. Pitchers rarely develop in a steady, uniform direction. The organizationÃ¢â‚¬â„¢s minor league and major league pitching coaches play a critical role. If not, why does every club pay for them? Bryan Price and Delino DeShields wield substantial influence in who gets promoted. They seem to have deep, complicated doghouses. Price makes out the lineup card.

Dick Williams warned that 2017 would be “a year to help crystalize who goes where.” Then he watched Bronson Arroyo get 14 starts. Was that to crystalize Arroyo should be inducted to the Reds Hall of Fame? It shouldn’t have taken 2, let alone 20, starts to know Tim Adleman’s fate.

Maybe WilliamsÃ¢â‚¬â„¢ choices were constrained by non-baseball factors. Perhaps ownership pushed for the sentimental, but ultimately catastrophic, Bronson Arroyo lap of defeat. Maybe Scott Feldman was put on the mound out of concern for attendance if the bottom fell out early. I still believe that an all-young starting rotation in April would have captured the public imagination and been vastly better for the organization in the medium and long run, if not right away.

With a team destined for non-contention, you give young, talented pitchers opportunity beyond their present-day merit. Even if they struggle, working through the challenge provides a valuable learning experience and teaching opportunity.

Losing big is tough to watch. Reds fans are wondering if we’re staring down yet another painful 94-loss season. Keeping faith under these circumstances is a challenge. But it does help to know your team is being smart and doing everything it can to get better. The stupefying lack of progress in sorting out the starting rotation last year was discouraging. Let’s hope the front office doesn’t squander the offseason with a similar loss of direction.