A series of minor transactions were announced by the Reds today, beginning with pitcher Luke Farrell, who has been claimed by the Chicago Cubs off waivers:

RHP Luke Farrell has been claimed off waivers by the Cubs. The #Reds 40-man roster is currently at 36 players. 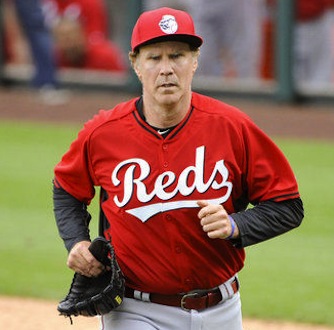 The Reds claimed the 26 year-old Farrell off waivers from the Los Angeles Dodgers back in early August, and he was mostly effective in nine late-season appearances with Cincinnati, posting a 2.61 ERA over 10.1 innings. Farrell has a reasonable chance of being a bullpen arm in the future, but there’s no reason to lose sleep over the fact that he’ll be plying his trade elsewhere. So long, Luke. We hardly knew you, but we wish you the best of luck.

(We don’t have a picture of Luke Farrell, so we added a photo of Will Ferrell.)

Next up, three pitchers — Asher Wojciechowski, Alejandro Chacin, and Nick Travieso — all cleared waivers. The three have been outrighted to Triple-A Louisville.

The Reds picked up Wojciechowski off the scrap heap in late April, and the 28 year-old posted a 6.50 ERA in 25 appearances for the club, eight of which were starts. Wojo was decent out of the pen, however — 2-0, 4.00 ERA, 17 games — so he likely earned himself a shot at next year’s bullpen. He will almost assuredly be a non-roster invite to spring training.

Alejandro Chacin made his big league debut this season for the Reds, and the 24 year-old was mostly ineffective in six innings. He has, however, been extremely effective at every stop in the minors, and looks to be a serious contender for the Cincinnati bullpen next year and beyond. I’m glad he passed through waivers.

Nick Travieso, of course, is the most interesting name in the group. Travieso, you will recall, was Cincinnati’s first-round pick in the 2012 draft, a high school right-handed pitcher out of Fort Lauderdale. You should go read Doug Gray’s roundup of these transactions, which includes this, about Travieso:

Nick Travieso missed all of the 2017 season with a shoulder injury that wound up leading to surgery. He was technically on the big league roster all year and spent the season on the 60-day disabled list. For that he earned big league pay Ã¢â‚¬â€œ donÃ¢â‚¬â„¢t spend it all in one place, Nick. However, with the 40-man roster crunch upon the Reds it made sense to try and sneak him through waivers now, coming off of an injury when it was unlikely another team would take a chance on picking him up before showing heÃ¢â‚¬â„¢s healthy.

Anyway, that’s that. Are you feeling the Hot Stove League excitement yet???