Here’s how one sharpie sees the Reds’ 2018 prospects:

“This reviewÃ‚Â by a sportsbook looks ahead to the Reds 2018 season with some of the longest odds to win the NL Pennant (upwards of 100/1) and the World Series (upwards of 200/1). Every year, certain teams vastly exceed expectations (think 2017 Twins), but one common bond between virtually all of those teams is a strong pitching staff. You can’t have poor pitching and expect to field a plus-.500 team, no matter how many times Joey Votto gets on base or how much pop little Scooter Gennett proves to have in that bat of his.”

So, there’s a chance.

Deck McGuire (28) made his first start for the Reds. After allowing the first two runners to reach base, he came within a pitch of getting out of the 1st inning unscathed. But instead, on a 3-2 count, he gave up a 3-run homer to Domingo Santiago and another run. Those were the only earned runs McGuire allowed in his three innings of work. He was lifted for a pinch hitter in the 4th. McGuire finished with 5 Ks, 2 BBs and gave up six hits.

The Reds gave up two more runs on a bad throwing error by Scooter Gennett in the 3rd inning. Deck had two outs, runners at first and second, and he got a ground ball to second base. Gennett fielded it and threw way wide of Joey Votto. Both runners scored and the two runs ended up being kinda important.

Scooter Gennett has been great at the plate this year. He’s been dreadful in the field. If the Reds decide to make him their 2B of the future, you may or may not get the hitting again. But you know that awful defense will stick around. That’s another argument for trading him this offseason if you can get another team to pay for his offense.

Ariel Hernandez pitched the 4th and 5th. He worked around five base runners – three hits and two walks – to keep the Brewers scoreless. The radar gun registered 100 mph. His average fastball velocity in the big leagues is 98.1.

In unrelated news, Aroldis Chapman‘s average fastball velocity this year has been 100.1 mph. That’s the lowest for Chapman in four seasons. He turns 30 in February.

Wandy Peralta pitched the 7th. He gave up a leadoff double, a walk, a sacrifice fly and a wild pitch which added up to the Brewers’ 7th run. Reminder – contrary to what you heard from Thom Brennaman on the TV broadcast – Peralta has not had a breakthrough season. He had one exceptional month – April. Otherwise his ERA has been 4.32 and his FIP and xFIP even higher. He struck out 13.11 batters per 9 innings in April, but just 6.49 per 9 innings after April. Peralta didn’t get worn down.

Scott Schebler hit a 2-run homer in the 2nd inning deep down the right field line. It was the 30th Scheblast of the season. Schebler is in the top-20 in the major leagues in power. That list starts: Stanton, Judges, Gallo, Bellinger, Trout. That’s good company.Ã‚Â In the 4th, Schebler beat out a routine ground ball to the second baseman who was playing in short right field. Among other things, Schebler is sneaky fast.

Adam Duvall followed Schebler’s homer with a single and tried to score on Tucker Barnhart‘s double. A bad throw made the play close. A good throw would have had Duvall by three steps. There were no outs, but Duvall went anyhow. That might not be a crazy decision with the next two batters being the pitcher and Billy Hamilton. It’s unclear if Hatcher sent Duvall or not. But “Billy Hatcher is waving the runner home” has become a terrifying sentence for a Reds fan.

After a 10-pitch at bat, Zack Cozart pounded his 24th home run in the 7th. He also made several Cozart-like defensive plays.

Jesse Winker hit his 7th home run in the 8th inning. It was a pinch hit solo shot. You have to wonder why Bryan Price had Jose Peraza pinch hit in the 4th inning instead of Winker with runners at 2nd and 3rd. It was a RH pitcher. Peraza hit a soft fly ball. Sure hope Price doesn’t think Peraza is a better hitter than Winker.

Deck McGuire is 28. Cody Reed is 24. Yes, it’s only one start. But how deep must Reed be in Bryan Price’s doghouse to be behind McGuire in line to get tonight’s start. 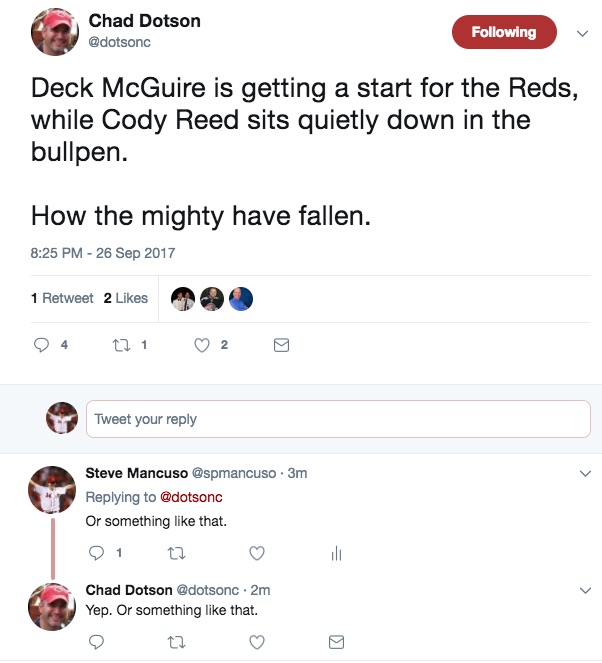 I can't think of one single reason to start McGuire instead of Reed, unless you are 100% certain that Reed will never again be a starter.