After back-to-back 90+ loss seasons, improvement was all anyone was reasonably hoping for heading into 2017. As we enter into the final stretch of the season, there has not been much holistic improvement in terms of win-loss record. Individually, some players have shown progress and development while others have not. Amid the crosshairs of expectations and reality, there is still much to be determined for this ball club moving forward.

One of those question marks is undoubtedly Jose Peraza. Expectations for Peraza likely varied, but given the Brandon Phillips trade and potential Zack Cozart trade, along with PerazaÃ¢â‚¬â„¢s respectable, partial campaign in 2016, a reasonable expectation was for him be a starting middle infielder with close to average production. Reality has aligned in terms of playing time but not quite so much in terms of performance.

Picking up in mid-September, PerazaÃ¢â‚¬â„¢s second-half stats are better with a 79 wRC+ and slash of .274/.347/.313. Amazingly, his walk rate has exploded to 9.3% since the All-Star break, drawing a lot of attention, and for good reason.

Starting around mid-July there is a huge decline in ill-advised swings as PerazaÃ¢â‚¬â„¢s O-Swing% (Outside the Zone) dropped from the low 40% range to the low 20% range, leading to the huge increase in walks. For reference, VottoÃ¢â‚¬â„¢s career O-Swing% is 22.9%. Peraza is never going to have VottoÃ¢â‚¬â„¢s plate discipline and his recent trend shows that his peak was not sustainable throughout the entire second half. Still, when comparing both rates to his career numbers (35.7% O-Swing rate and 3.6% walk rate), Peraza has been much better for the past two months.

Plate discipline, while very important, will not make a good baseball player by itself. At some point you have to be able to hit the ball. How have some of PerazaÃ¢â‚¬â„¢s other peripherals fared this season? 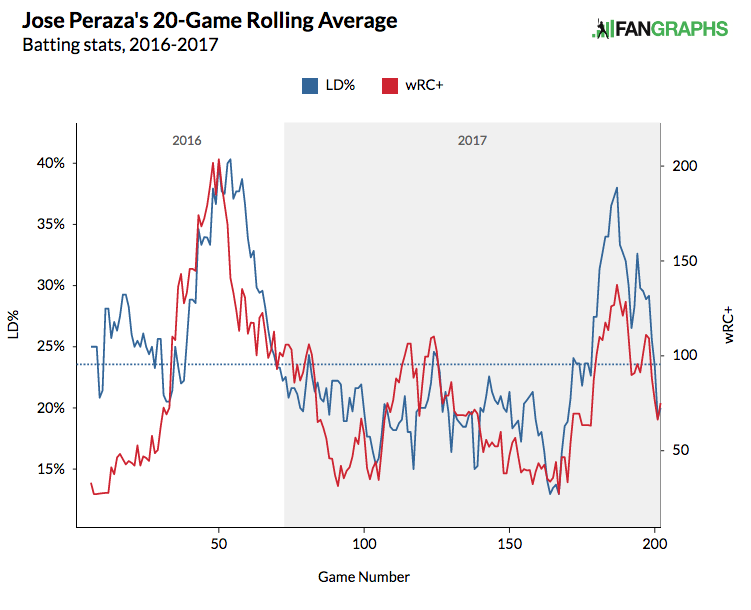 PerazaÃ¢â‚¬â„¢s lack of power really puts an emphasis on his ability to hit line drives. This is something he did well last year, but has struggled with in 2017, especially early on. The turnaround later in the year coincided with his better plate discipline. Being more selective and waiting for better pitches allowed him to make better contact. While it has dropped off recently, it is encouraging to see that Peraza utilized his improved plate discipline to make better contact. 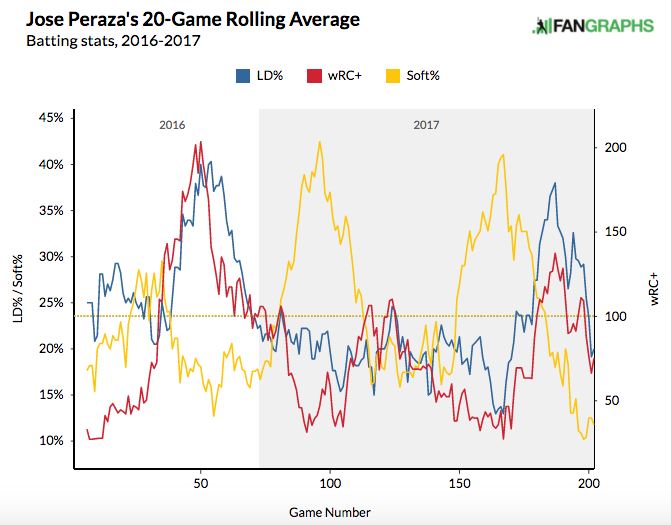 Soft contact has been another problem this year and I added it to the graph above. For the year, Peraza stands at 25.8% soft hit rate, giving him the second-highest percentage in baseball among qualified hitters. Compare that to 19.4% last year from last year and it is no question why his balls in play have had a harder time finder open space. This is likely contributing to a BABIP decline of 67 points (.361 to .294), roughly the same drop he has seen across his AVG/OBP/SLG line. The positive is that he has continually dropped his soft hit rate since late July, again, utilizing his increased selectivity to benefit his total offensive game.

When I read ChadÃ¢â‚¬â„¢s tweet, I immediately thought about PerazaÃ¢â‚¬â„¢s walk rate improvement, but also the fact that it was not sustained. I said that I would like to see more balanced improvements across the rest of his game, rather than just an unsustainable walk-rate for a month. After looking into the data more, his change in approach led to substantial improvements in plate discipline, which was very noticeable, but also improved his batted ball profile. So while the overall results for the year have not met expectations, it is encouraging to see change being made that has shown itself in several different areas of his game.

Also keep this in mind: Peraza is only 23 years old. Not many players have success in the major leagues at age 23. Pete Rose hit .269/.319/.326 in 1964. Barry Larkin hit .244/.306/.371 in 1987. Current shortstop Zack Cozart was in Double-A during his age-23 season. The list goes on, of course, and it adds to the message that this is far too early to make final judgments. It is, however, a great time to look for improvements that he is making and will hopefully continue to build on going forward.