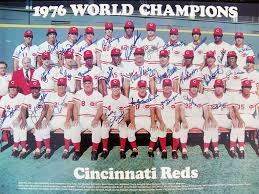 The Big Red Machine is the greatest team in Reds history (thanks, Captain Obvious) and nearly every key contributor from that era has been honored with induction into the Reds Hall of Fame.  With the induction of Pete Rose last year, the entire Great 8 is in.  The manager is in.  The general manager is in.  Three starting pitchers and three relievers from that era are in.  This is not unusual for the Reds Hall of Fame; there are thirteen inductees that were key contributors to the previous best team in Reds history, the 1939-40 Reds. But there is one key contributor from the Big Red Machine era whose plaque is missing, and should be selected by the Reds Hall of Fame Veterans Committee in the upcoming election. LetÃ¢â‚¬â„¢s go back in the time machine to June of 1973.

The Reds were the defending National League champions, and in 1972 the pitching staff had been a strength of the team (the Reds were third in the NL in ERA that year).  The Reds were counting on a rotation of Gary Nolan, Jack Billingham, Don Gullett, a young Ross Grimsley, and trade acquisition Roger Nelson to anchor the rotation, but those plans fell apart quickly. Nolan, the teamÃ¢â‚¬â„¢s top starter in 1972, made one appearance during the year and didnÃ¢â‚¬â„¢t return to the rotation until 1975. Nelson was injured most of the season and made only eight starts.  Gullett was weak from a bout of hepatitis, and on June 11th, the Reds were 5.5 games out of first and in fourth place in the NL West.  Bob Howsam pulled off a trade that didnÃ¢â‚¬â„¢t seem like an impact deal at the time, sending a 22 year old outfielder named Gene Locklear (.325/.395/.522 in AAA in 1972) for a 30 year journeyman left hander with the Padres named Fred Norman. Norman had debuted in the majors at age 19 with the Kansas City AÃ¢â‚¬â„¢s, and had also pitched for the Cubs, Dodgers and Cardinals, mostly in relief.  At that point in his career, Norman was 14-28 with a 4.04 ERA (85 ERA+).  It makes one wonder what type of commentary Redleg Nation would have written on the trade at the time. Howsam had noticed that Norman had pitched well for a terrible Padre team in 1972 (9-11, 3.44 ERA, 3.20 FIP), and that he had also pitched well against the Reds (4-1 in 1972, and a complete game 2-1 win on May 20th in 1973).  Other contenders were interested in Norman, but the Reds threw in enough cash (reportedly $80,000, a big sum at the time) to make the deal. 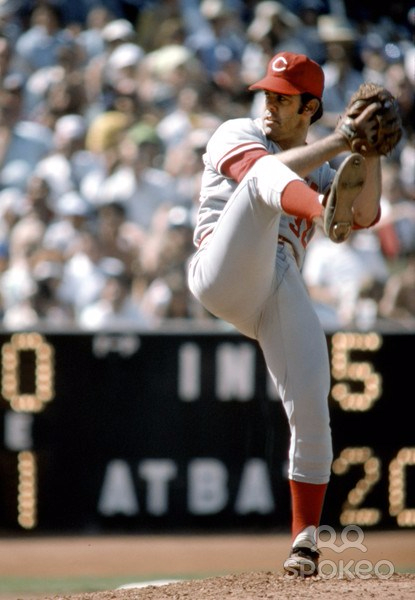 On June 15th Norman made his first start for the Reds.  The result was a 5 hit, complete game shutout against the Pirates.  On June 19th, he followed it up with a 3 hit complete game shutout against the second place Giants. Four days later, he (gasp) gave up a run, beating the first place Dodgers 4-1 in yet another complete game.  After a loss to Houston, he reeled off five wins in his next six starts, with three more complete games. HowÃ¢â‚¬â„¢s that for a mid-season trade?  He ended up going 12-6 for the Reds, with seven complete games and three shutouts.  The Reds, who had fallen to 11 games back of the Dodgers on June 30th, started an amazing comeback with a doubleheader sweep on the Dodgers on July 1st.  In game one, Hal King hit a walk-off 3 run homer to beat Don Sutton (the winning pitcher Ã¢â‚¬â€œ Fred Norman).  The Reds ended up winning 99 games, clinching their third NL West title in four years.

The 1973 season is somewhat forgotten by Reds fans since they lost in the playoffs to an inferior Mets team, but Norman contributed in the NLCS, starting the elimination game four.  In a highly charged atmosphere at Shea Stadium (the day after the Pete Rose/Bud Harrelson fight), he surrendered only one run in five innings before the bullpen took over; the Reds tied the game on a Tony Perez home run in the seventh and won it on a Pete Rose homer in the 12th.

Norman continued to be a solid starter in 1978 and 1979, with league average ERAÃ¢â‚¬â„¢s.  The Reds let him go after the 1979 season, and he signed with the Expos.  Pitching mostly in relief, he retired after the 1980 season. 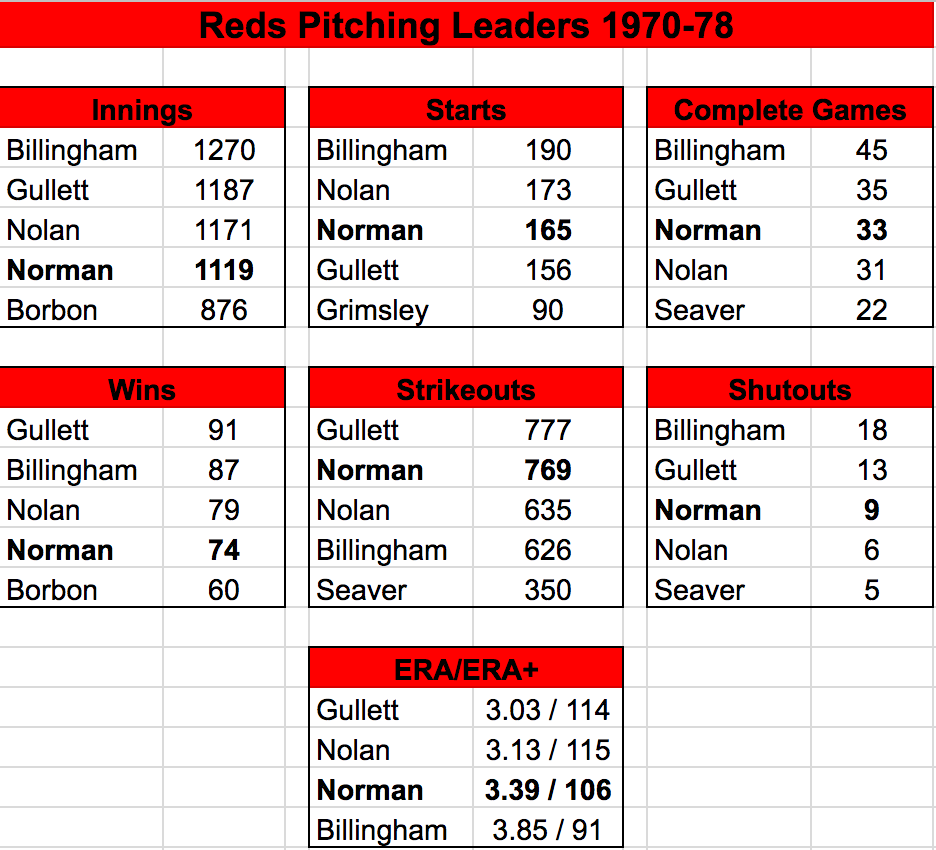 Don Gullett had the reputation as the smoke throwing strikeout artist, but during this period, Norman actually had a slightly higher strikeout rate (16.2% vs. 15.9%).  But the real question is if you look at these rankers, is there a reason why three of these four would be in the Reds Hall of Fame, and the fourth would not? Jack Billingham had the best season of a Reds starter during the era and was fantastic in World Series play (an 0.36 ERA); Don Gullett was SparkyÃ¢â‚¬â„¢s favorite who usually started game 1 in post season series; Gary Nolan was the most talented, and had the best Reds career despite frequent injuries; while Fred Norman made similar contributions to the success of the BRM with his hook being that he was Ã¢â‚¬Å“the short lefty with a good screwball who hated to come out of startsÃ¢â‚¬Â.

Is Fred Norman qualified for the Reds Hall of Fame?  Even if you ignore that he was a key member of the Reds’ greatest team, he ranks among the Reds top 25 pitchers since 1900 in Wins (23rd), Starts (21st), Innings Pitched (23rd), WAR (27th) and Strikeouts (17th).  Among Reds pitchers that threw 1300 innings, his ERA+ of 106 is tied for 16th with Reds HOFers Jim OÃ¢â‚¬â„¢Toole and Pete Donohue.  His .570 winning percentage is 9th.  During his career with the Reds (1973-1979) he was second among the pitchers in WAR (behind Tom Seaver) and first in wins, starts, innings pitched, strikeouts, and complete games.  His 13.3 WAR with the Reds is comparable to teammate Don Gullett (13.9), and 2008 inductee Joey Jay (12.9), who like Norman, was a trade acquisition who contributed to several good Reds teams. 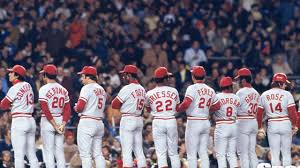 I can only speculate on why Norman has been overlooked when nearly every one of his teammates has been inducted into the Reds Hall of Fame.  Part of it is that he was a pitcher, and if you play word association with any Reds fan from that era and say Ã¢â‚¬Å“Big Red MachineÃ¢â‚¬Â the response will be Ã¢â‚¬Å“The Great 8Ã¢â‚¬Â or Ã¢â‚¬Å“greatest lineup everÃ¢â‚¬Â or Ã¢â‚¬Å“cool statues outside GABPÃ¢â‚¬Â.  Somebody had to pitch, and the pitchers were better than they were given credit for, but they suffered in comparison to the offensive stars of the team.  Norman was not a home-grown player like Gullett or Nolan, and his best moments and seasons didnÃ¢â‚¬â„¢t match up with the 1975-76 pinnacle of the Reds dynasty.  Another possible reason is that the Reds Hall of Fame did not induct anyone from 1989-1997, creating a large backlog of worthy candidates.  The four pitchers that were the biggest contributors to the Big Red Machine were Jack Billingham, Don Gullett, Gary Nolan and Fred Norman, and the logic that says three of these should be in and one out escapes me.  One can debate rather a small or large Hall is preferable, but with 80 players and 86 members, the Reds Hall of Fame clearly prefers the large hall philosophy.  Norman is clearly qualified for the Reds Hall of Fame.

As a historian, IÃ¢â‚¬â„¢m glad that the Reds Hall of Fame has honored the likes of Bid McPhee (inducted in 2002, 59 years after his death) or Jake Beckley (inducted in 2014, 96 years after his passing), but if there is any doubt, the priority should be to honor the living while they are still around to enjoy it.  Fred Norman is one of the better pitchers in Reds history, a key member of the greatest team in franchise history, and turns 75 on August 20th. 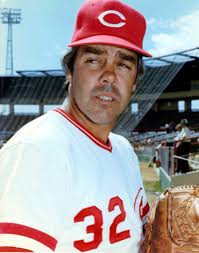 Sources:  Baseball-Reference.com  Big Red Dynasty by Greg Rhodes and John Erardi.  Norman was also a guest on the Redleg Nation Radio podcast back in 2013, when he spoke with RN’s Bill Lack for an extensive discussion of his career. Check out Part 1 and Part 2.