The Reds offense had another tough day. They didn’t score a run until the 9th inning, which broke a string of 18 consecutive scoreless innings against Pirates pitching this weekend. The Reds loaded the bases in the 9th, and had the go-ahead run on first base. However, Jose Peraza weakly grounded out to the pitcher to end the game. The game ended with Joey Votto in the on-deck circle.

Sal Romano gave the Reds another solid start, allowing just one earned run over 5.2 innings. The Reds will come back to GABP tomorrow, and try to play spoiler to the Milwaukee Brewers. The Brewers are right in the middle of the wild-card race. 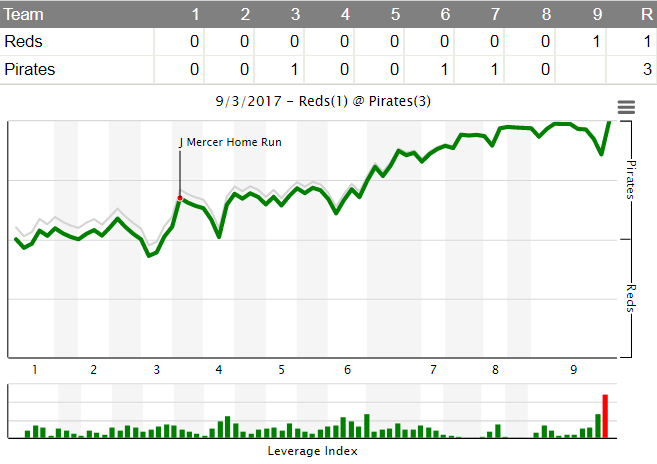 According to FangraphsÃ‚Â WPA statisticÃ‚Â (winning percentage added), the most important play of the game wasÃ‚Â Jose Peraza grounding into a fielders choice with the bases loaded to end the game.Ã‚Â That play decreased the Reds chances of winning by 14.1% (from 14.1% to 0.0%).

Sal RomanoÃ‚Â continues to make a strong case for a spot in the 2018 rotation. He finished today with a line of 5.2 IP, 4 H, 1 ER, 4 BB, 2 K. The four walks today were a little troubling, but if not for an error on Chad Wallach, Romano’s day might have looked even better. Romano also got his first big league hit, a double off the wall.

Joey VottoÃ‚Â had a two hit day, including a double.

Eugenio SuarezÃ‚Â had the hardest hit ball of the day, with a double that registered a 107.2 exit velocity.

Scotter GennettÃ‚Â showed that he really can do it all, when he put down a bunt single to beat the shift in the 4th inning.

Phillip ErvinÃ‚Â had a nice AB to keep the Reds alive in the 9th inning, as he fought off a two-strike count for a single. Could Ervin be working his way to a platoon role in 2018 with Scott Schebler or Jesse Winker?

Rough couple days for the Reds offense. They did collected 10 hits today, but only walked three times. The Reds offense was killed today by grounding into two double plays.

Chad WallachÃ‚Â got a start today. He didn’t catch a pop up that had some tough backspin on it (still a very catchable ball though). The batter, Max Moroff got a second chance, and then banged a double off the wall, and later scored.

Today’s game ended withÃ‚Â Joey VottoÃ‚Â in the on-deck circle. Why exactly did Price move Votto from the #2 spot? Billy Hamilton and Jose Peraza should never get more trips to the plate than Votto. Never.

Billy Hamilton lead off the game with a single.Ã‚Â Jose PerazaÃ‚Â then laid down a bunt. It looked like Peraza might have been bunting for a single, and not a straight sacrifice. Still, I absolutely hate bunting with Hamilton on first base. I don’t understand that all, which is why I am so against him ever batting 8th.Ã‚Â Billy HamiltonÃ‚Â then got picked off second base. The next batter, Joey Votto, doubled to really put a cap on a brutal first inning.