After every World Series, we case the promised land looking for a winning formula. We discover that each champion used a unique combination of pitching, hitting and defense; of run prevention and run production.

The bottom line: To hoist pennants, score more runs than you give up.

Teams have to figure out which players they want and which qualities to emphasize and reward. To that end,Ã‚Â player skills are studied in minute detail. What is the relative value of speed, contact, plate discipline, power and overall athleticism? Are these measurables even the right place to be looking? What about intangibles such as leadership and resilience?

The good news for Cincinnati Reds fans is our 2017 team has made ginormous progress in producing runs. The Reds have scored 4.80 runs per game (R/G) this year compared to 4.42 R/G last year. That’s the team’s best offense since 2010.

What’s behind all the Reds runs?

Those of you who evaluate hitters by batting average will be left without an answer. The Reds average this year (.255) is essentially the same as the team’s 2016 average (.256).

Nope. The club is stealing fewer bases this year (.77 SB/G) compared to last season (.86 SB/G). Other measures of base running for the two years are about the same. Player speed and athleticism might help with defense, but we’re looking at offense right now.

If not batting average and speed, maybe walks are a factor in the Reds scoring more runs.

We’ve looked at batting average, team speed and walks. How about power?

The Reds have already hit 27 more home runs this year than all of 2016, with a month of the season remaining. At this rate, theyÃ¢â‚¬â„¢ll exceed 2016 by 60 home runs. Five players Ã¢â‚¬â€œ Joey Votto, Eugenio Suarez, Adam Duvall, Scott Schebler and Scooter Gennett Ã¢â‚¬â€œ have hit 20-plus. Zack Cozart (17) may join that group. Votto and Duvall have already hit 30-plus. Schebler and Suarez could reach 30.

But isn’t every team hitting better?

Just three years ago, run scoring had been in a sustained and sharp decline. We wrote a seven-part seriesÃ‚Â at Redleg Nation in the spring of 2015 on the new, lower run environment, analyzing its causes. In 2014, only eleven players hit 30-plus home runs. Remember this? 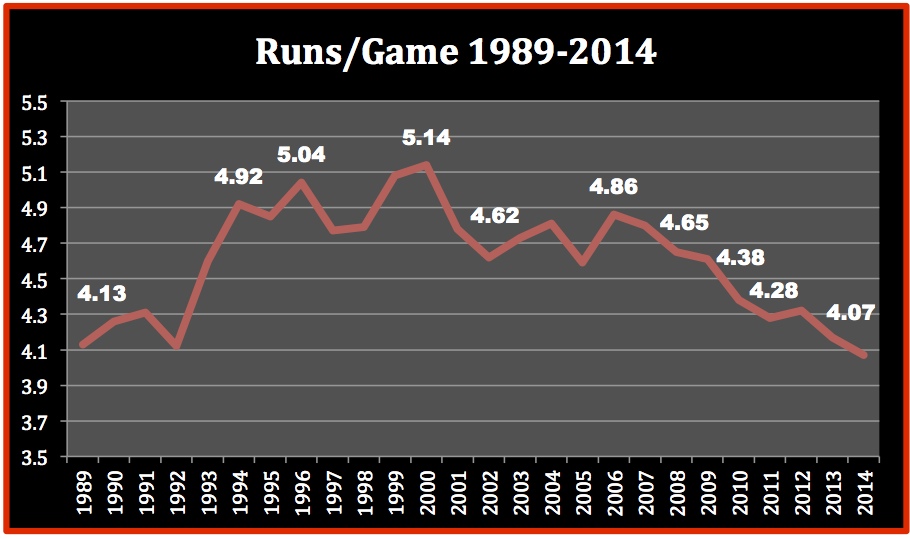 But exit velocity and home runs spiked in 2015 across the league. That trend continues today. Power is up this year across MLB. Major league hitters are on course to hit more home runs than ever before, surpassing the 5,693 smacked in 2000.

Home runs are almost entirely responsible for the steep increase in runs scored.

The three-year burst of home runs is the largest in the history of baseball. That includes the three years following the end of the Dead Ball Era and the three years at the start of the the Steroid Era.

Why are MLB power numbers way up?

Theories: Players, who are better athletes, are swinging harder and on a steeper plane. Smaller ball parks. Warmer temperatures. Diluted pitching. Organizations through scouting and statistics are prioritizing the type of young players who hit home runs. Evidence is piling up that the baseball itself is a big factor.

Whether you buy into just one of those explanations, a few of them, or all of the above, home runs and isolated power (ISO) are soaring. [Isolated power (ISO) measures a hitter’s extra bases per at bat.] League ISO was .135 in 2014, rose to .162 last season and continues skyward in 2017 at .172.

The league-wide wave in runs scored raises an important question: Have the Reds made real gains in offense relative to the competition? Or are they just an Ohio River paddle steamer lifted like other boats by baseballÃ¢â‚¬â„¢s rising tide of power?

The answer is unambiguous and positive. Two simple stats show it:

The Reds have made genuine gains in power hitting relative to the rest of the league.

The next big question

That bit of good news on a Friday leads to the next question: Who is responsible for the Reds power surge?

Another happy headline. No one or two players stand out. Reds home runs are already above last year at every position other than shortstop. SS has the same number as last year (remember, thereÃ¢â‚¬â„¢s a month of this season left). The Reds didnÃ¢â‚¬â„¢t have a pinch hit home run last year. In 2017 they already have six (Duvall, Suarez, Jesse Winker, Scooter Gennett, Patrick Kivlehan and Michael Lorenzen).

Returning players — Votto, Cozart, Suarez and Schebler — are hitting for more power. They may be benefiting from livelier baseballs, improved plate discipline and/or Ã‚Â tweaked swing planes.Ã‚Â Votto, Cozart and Suarez already have more home runs than last year. Adam Duvall is on pace to surpass his 2016. Scott Schebler (26) has replaced Jay Bruce (25) in home runs.

But the Reds power escalation isn’t due solely to returning players.

New additions to the lineup Ã¢â‚¬â€œ Gennett, Kivlehan and Devin Mesoraco Ã¢â‚¬â€œ have made important contributions. Gennett has 23 home runs (16 at 2B) compared to eleven that Brandon Phillips hit in 200 more at bats. GennettÃ¢â‚¬â„¢s ISO (.249) is more than double that of Phillips (.122). Kivlehan has eight home runs and an ISO of .192 in 164 plate appearances.Ã‚Â In 165 times at the plate, Mesoraco has hit six homers with an ISO of .177, large improvements over Ramon CabreraÃ¢â‚¬â„¢s 2016 bat.

The Reds master plan for rebuilding has been confusing at times. Are they emphasizing hitting or pitching, speed or power, contact or on-base skills? All of the above? The lack of clarity is partly the product of a tremendous changeover in the front office. The timing of that sea change in methods and personnel in the middle of the rebuild was less than ideal.

Yet, by design, happenstance or a vision dancing across the porch, run production has been markedly better for the Cincinnati Reds this year. A genuine bright spot. So far, the formula has been keener eyes and thundering bats.