You need to vote for Reggie Sanders at least once a day, every day.

Look at the rules for the voting:

Players whose careers ended more than 13 years ago along with managers and executives are considered by the Reds Hall of Fame’s Veterans Committee.

Fan Voting
Fans may vote for no more than one player per ballot submission and may only submit one ballot per email address per day throughout the voting period. The fans’ vote will be combined with votes from select members of the media and Reds alumni to determine the Modern Player Ballot winner. Any candidate elected by the Veterans Committee will join the Modern Player Ballot winner and will be inducted as part of the Reds Hall of Fame Class of 2018. The voting period is from August 21-September 30, 2017.

So…only one player from the ballot can be the “Modern Player Ballot” winner. In other words, only one of these guys is getting inducted this time around. I worry that Reggie is going to be lost among the more recent players, and he’ll have trouble getting in. I call on Redleg Nation to make sure that doesn’t happen.

I know, I know…you’re all still mad at Reggie because he struck out a lot in the 1995 National League Championship Series. Get over it. Sanders had a great career as a Red.

Sanders ranks 20th among all Reds hitters in the history of the franchise in WAR, with 21.5. Every eligible hitter ahead of Sanders on the Cincinnati franchise all-time list is already in the Reds Hall of Fame.

You can make a pretty good case for everyone on this list to be enshrined. Franco is another wrong that needs to be rectified ultimately. Graves, Boone, and Rolen (in that order) will have their supporters, and I wouldn’t be upset if any of them were in the Hall of Fame eventually. 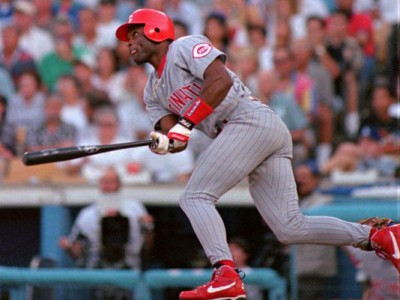 But let’s get Sanders inducted first.

You may remember last year, when Nick Kirby made the case for Sanders here in the digital pages of Redleg Nation. Go read that piece (mostly so you know that I’m not the only one out here on this particular limb). But here’s my case for Reggie:

In that aforementioned 1995 season, Sanders was a legitimate MVP candidate, posting 6.6 WAR while hitting .306/.397/.579 with 28 homers, 99 RBI, and 36 stolen bases (155 OPS+). Now listen to this: only one right fielder in Reds history has ever put up a better season (by WAR) than Sanders’ 1995. That right fielder is Frank Robinson, who was, you know, pretty good. (Of course, Robinson had three better seasons than Sanders’ best, but still….)

For quite some time, I’ve been annoyed that Sanders has been passed over by a number of far less-deserving candidates (I won’t mention any names here, but you can probably figure out who I’m talking about). As time goes by, fans tend to forget how good Sanders was as a Red. He was really only great that one season, but he was a solid right fielder for the club for a number of years. And he’s certainly a Reds Hall of Famer.

Here’s the link to vote for Sanders every single day. Let’s do this, Nation.