Since everybody is all mad at each other about statues right now anyway, let us discuss Pete Rose.

Those of you who have read me for a while know that I used to work at the Reds Hall of Fame and Museum, a position I speak of with much respect and affection, because I was paid to meet fantastic people and talk about baseball all day.Ã‚Â  So you might wonder why I left.

The reason is a person who, no matter what Major League Baseball and Cooperstown decide, will never get exactly where he wants to go.

First, in order to ward off running the same arguments through the wash cycle one more time, let us stipulate the following.Ã‚Â  Let us also re-link this article in the future as a form of Internet shorthand to save us all a bunch of typing and spittle-covered keyboards.

1) No one disputes that based on his play alone, Pete Rose is a first-ballot Hall of Famer. His rampant and constant gambling, however, also took place while he was on the field. That is the problem.

2) People who use steroids shouldnÃ¢â‚¬â„¢t be in the Hall of Fame either.

3) If we waited for perfect people to enter the Hall of Fame, we would have empty Halls of Fame. We all have flaws. Even Johnny Bench inflicted the world with an appearance on Hee Haw. However, when a sport has a big, giant rule, and that big, giant rule is emblazoned on the door of the clubhouse, itÃ¢â‚¬â„¢s not too much to ask for players and managers to follow said big, giant ruleÃ¢â‚¬â€let alone break it on a near-daily basis for years.

4) Pete RoseÃ¢â‚¬â„¢s jail time, sins of hair, and incredibly bad personal judgment in commercials and personal life arenÃ¢â‚¬â„¢t what is under discussion here. His actual betting on baseball is, in fact, actual.

6) Pete Rose has done a lot of nice, generous things for a lot of people and his on-field feats have generated wonderful memories for generations. Thank you, Pete.

And yet, the enormous Wall of Balls honoring Pete Rose at the Cincinnati Reds Hall of Fame and Museum functioned, until recently, as our Western Wall:Ã‚Â  People went there to pay homage, and complain.

TheyÃ¢â‚¬â„¢d crane their necks back to the 50-foot high wall of 4256 baseballs, one for each Rose hit in his career, then glance around at the gallery of Reds enshrined in the Hall of Fame. They’d wander the plaque timeline of the 1970’s, as though hopelessly lost in a 3 square foot area. And then came the eternal question:

My method of triage for this customer service crisis, which unfolded several times daily, was to point out that the Reds Hall of Fame followed the rules of Cooperstown, which state that banned players are not eligible for the ballot. But! Should all of Ã‚Â Cincinnati become buried right that second in a massive volcanic eruption, future archeologists would certainly know of the existence and exploits of Peter Edward Rose, because the Cincinnati Reds Hall of Fame and Museum, in a controlled Pete explosion, has bits and pieces of him scattered in all possible corners. And also the entire facade of a supporting wall of this entire freaking building, the suggestion being that if Pete Rose doesn’t stand, we all come tumbling down without him.

This seemed to comfort the angry, but not extinguish the issue entirely, and theyÃ¢â‚¬â„¢d drift off to the next portion of the museum:Ã‚Â  A gift shop christened Ã¢â‚¬Å“CharlieÃ¢â‚¬â„¢s Corner.Ã¢â‚¬Â And I was left to, again, to reflect on the fact that of all the bats, balls, plates, plaques, jerseys, books, entire flower gardens, and photos related to Rose in the museum, not a single, solitary one of them even mentioned the fact that he had been permanently banned for breaking Rule 21. And when it comes to healing the mess, where, indeed, is Pete.

The day Pete Rose was ushered into the front door of the Hall of Fame was the day I exited out the back, because I knew that his mounted bronze visage wouldnÃ¢â‚¬â„¢t mention the banning, and sure enough, it was as though Rose had ascended directly to a rocking chair in Sedamsville, where small children came to gather at his feet and hear tales of Tony Perez. It isnÃ¢â‚¬â„¢t honest, and it isnÃ¢â‚¬â„¢t right. I do not appreciate the idea that I must explain to my godson, whose moral well-being has been placed in my fumbling hands, that as long as your on-base percentage is high enough and you’re a great interview, rules donÃ¢â‚¬â„¢t apply.

ItÃ¢â‚¬â„¢s taken two years of writing for Redleg Nation for me to even gather the courage to start a post voicing such an apostate opinion. Why can’t I just shrug and fling my arms around the huge head-first statue at the ball park? It would certainly make life less agonizing. Is it because I was born too late to witness his on-the-field mighty deeds? ItÃ¢â‚¬â„¢s impossible not to appreciate them. I was a little girl when Pete Rose hit 4192; I was also a little girl when images of a peeling, dirtied baseball appeared in the national media with the news that manager Rose had bet on baseball, bet on the Reds, and done so repeatedly.Ã‚Â 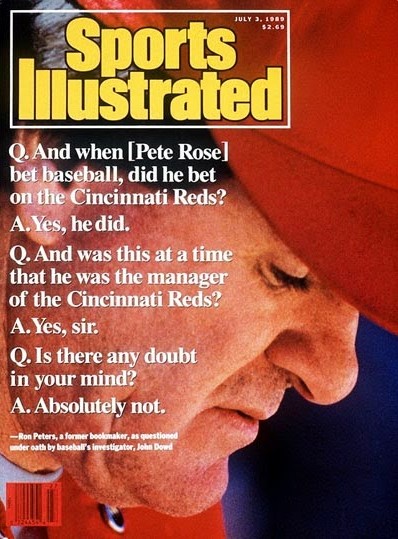 CincinnatiÃ¢â‚¬â„¢s slavish adoration of Ã‚Â Pete Rose is the most enabling, unhealthy nightmare of a dysfunctional relationship I have ever witnessed, and people, I used to watch Jerry Springer. ItÃ¢â‚¬â„¢s safe to say that according to Rose himself, Reds fansÃ¢â‚¬â„¢ treatment of him fed into his daily decisions to bet on baseball:Ã‚Â  He did it because he thought he could get away with it.Ã‚Â

IÃ¢â‚¬â„¢ve heard many say that Rose is to be excused all this simply because heÃ¢â‚¬â„¢s from CincinnatiÃ¢â‚¬â€and not only Cincinnati, but the hardscrabble, parish-festival patronizing West Side, and that his wild embrace of baseball and hard work exemplifies us. But if he represents Cincinnati, why, then, the continual excusing of this inexcusable behavior? If weÃ¢â‚¬â„¢re the ones who raised him, shouldnÃ¢â‚¬â„¢t we be the first to scream at him to act like he has a conscience?

If it sounds as if I regard Rose’s choices as a personal affront, it’s because I do. He represents much more than himself. He always knew this. DoesnÃ¢â‚¬â„¢t it wound you that he repeatedly lied to us?Ã‚Â  That by doing so, he then made us complicit in his deceit? Why did he do this– why did he do it to us? What was he trying to gain, with all his wealth and fame and assured ascendancy to every baseball honor ever conceived?

The best answer is one I heard my former co-worker give a second-grader who raised a hand and wanted to know why Pete Rose would gamble on baseball (They know. Even if there’s no mention of it anywhere in the museum– oh, they know.)

“I think,” this wise man said, “it was something he just couldn’t notÃ‚Â do.”

And for that, I feel sorry for Pete Rose. But I feel sorrier for Cincinnati.

So how do we handle this? Ã‚Â We can’t ignore Pete Rose, nor should we. He’s there. There’s no eradicating an essential cog of the Big Red Machine. But that doesn’t mean we should idolize him.

In the building housing the Reds Hall of Fame and Museum, a glass door separates the final exhibit space from the room housing the Hall of Fame. When I took school groups from one to the other, I always paused at that door, reminding them that record breakers, championship teams, and great players were present in the Musuem, but the Hall of Ã‚Â Fame was something separate, special, and reserved for very few. Until recently, that door served as a barrier for Pete Rose–that for all his towering presence and rightful presence in the Museum, he had barred the door to the Hall of Fame through his own actions. It was a barrier he could see through, but never cross.

There’s a reason why the Catholic Church can take centuries to canonize a person as a saint. The process is slow, deliberate, and full of committees and counter-committees. It’s designed that way on purpose. The idea is to avoid honoring a person from a rush of contemporary emotion, and to allow plenty of time for investigation of unreconciled misdeeds. The only thing more painful than losing a hero to death is losing one to disgrace. Ask the good people of Happy Valley about this sometime.Ã‚Â

You would think Cincinnatians would have a zero-tolerance attitude on gambling, as our teamÃ¢â‚¬â„¢s first World Championship was forever tainted by members of the White Sox taking payouts from gamblers to throw the series. Gambling in sports is an Extremely Big Deal. Historical perspective is vital here: We very nearly lost baseball entirely because of gambling, and it almost took horse racing down along with it. It’s not a coincidence that one of the first things the first commissioner of baseball did was administer a career death penalty to the Black Sox.

We have now reached the stage in the exhausting Rose saga in which he has power-pivoted from apologizing to greatÃ‚Â moral indignation. He claims a gambling addiction, but then takes a job in, of all places on the planet, Las Vegas. He has also railed against ads for fan betting organizations in GAPB, as if he does not possess the critical thinking skills to realize those these enticements are meant for the fans, not those in the dugoutÃ¢â‚¬â€that he as a player-manager was permitted to bet on football, basketball, horse racing, tennis, golf, when the first leaf will drop in the fallÃ¢â‚¬â€anything but baseball. ThereÃ¢â‚¬â„¢s the rest of the world, and then there is him.

I havenÃ¢â‚¬â„¢t even gotten into the bat corking. Ã‚Â I won’t, but it’s there, split open for the world to see and ignore, if it chooses.

I also have to wonder how sorry Rose actually is about how his career ended since heÃ¢â‚¬â„¢s now treating it as one giant LOL:Ã‚Â  He appears in shoe commercials whining about hallways and voices radio ads which end with Ã¢â‚¬Å“You can bet on it.Ã¢â‚¬Â Yes, this is all very hilarious, Pete. Ã¢â‚¬Å“Go sign a petition for me to be in the Hall of Fame!Ã¢â‚¬Â No.

The Phillies, meanwhile, in the wake of statutory rape accusations against Rose, have noped out of the entire drama.Ã‚Â I have no idea if his accuser’s story is true, but Pete Rose, to his credit, said he understood the decision and then shut up. 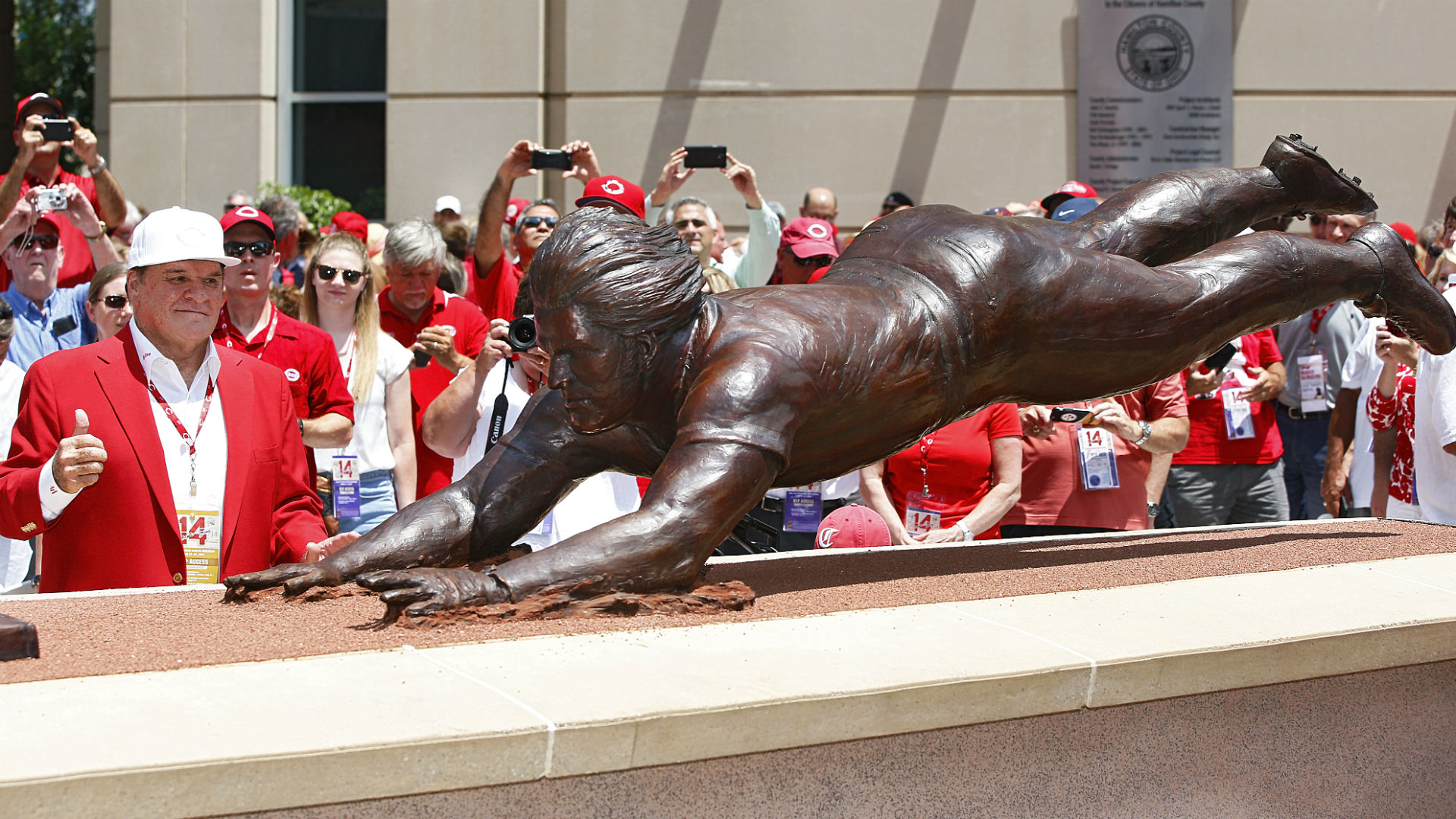 When I heard this, it occurred to me that perhaps Pete Rose was maybe coming around and truly understanding the impact of what heÃ¢â‚¬â„¢s doneÃ¢â‚¬â€and then his voice came on the radio once again, telling me I can bet on it.

And I just donÃ¢â‚¬â„¢t believe him.

Meanwhile, bronze Pete remains with his face near the dirt outside the gates of the baseball stadium, arms outstretched, never quite grasping what he’s reaching for.