This was submitted by Joe Rettig, a long-time reader and supporter of Redleg Nation. You may recall Joe’s report earlier this season about his visit to Busch Stadium in St. Louis. This time, it’s Miller Park in Milwaukee. Thanks, Joe! 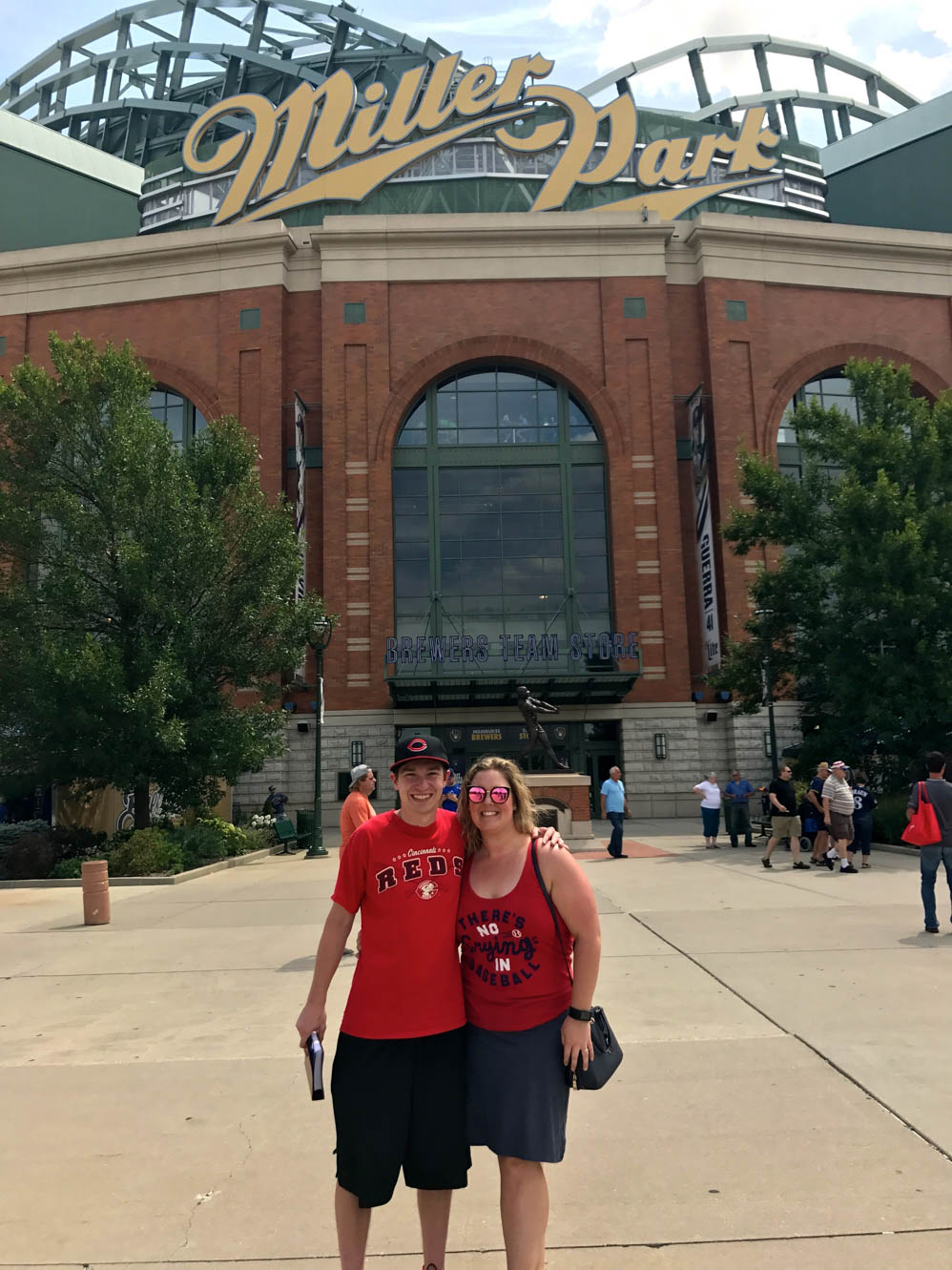 The rubber match between the Reds and Brewers didnÃ¢â‚¬â„¢t go the Reds way on Sunday. With the serviceable Scott Feldman and should-be minor leaguer Sal Romano taking the hill the last two games of the series, the outcome wasnÃ¢â‚¬â„¢t surprising. The last time I saw Romano pitch was his first rehab start for the Louisville Bats vs. the Indianapolis Indians and it went very similar to his start on Sunday. He lasted 5 innings, giving up 6 earned runs. He started off the bottom of the first with a walk and proceeded to give up 3 runs on 3 hits. The Reds battled back getting a two run homer from Adam Duvall in the top of the fourth, but the Brewers put up a run of their own in the bottom of the inning. The final score was 7-4 Brewers.

The Brewers newest addition to their lineup, Neil Walker, made his presence felt in the first inning with an RBI single; he also singled in the third inning. Walker was brought over from the Mets a few days ago along with cash considerations in exchange for a player to be named (similar to the Jay Bruce trade the Mets made recently). Ryan Braun also had two hits for the Brewers including the first RBI of the game, a double in the bottom of the first. The dagger was Hernan PerezÃ¢â‚¬â„¢s three-run homer in the 5th. Matt Garza pitched 5.1 innings of 4 run baseball, and the bullpen did the rest. The relievers including closer Corey Knebel pitched 3.2 innings of scoreless baseball. 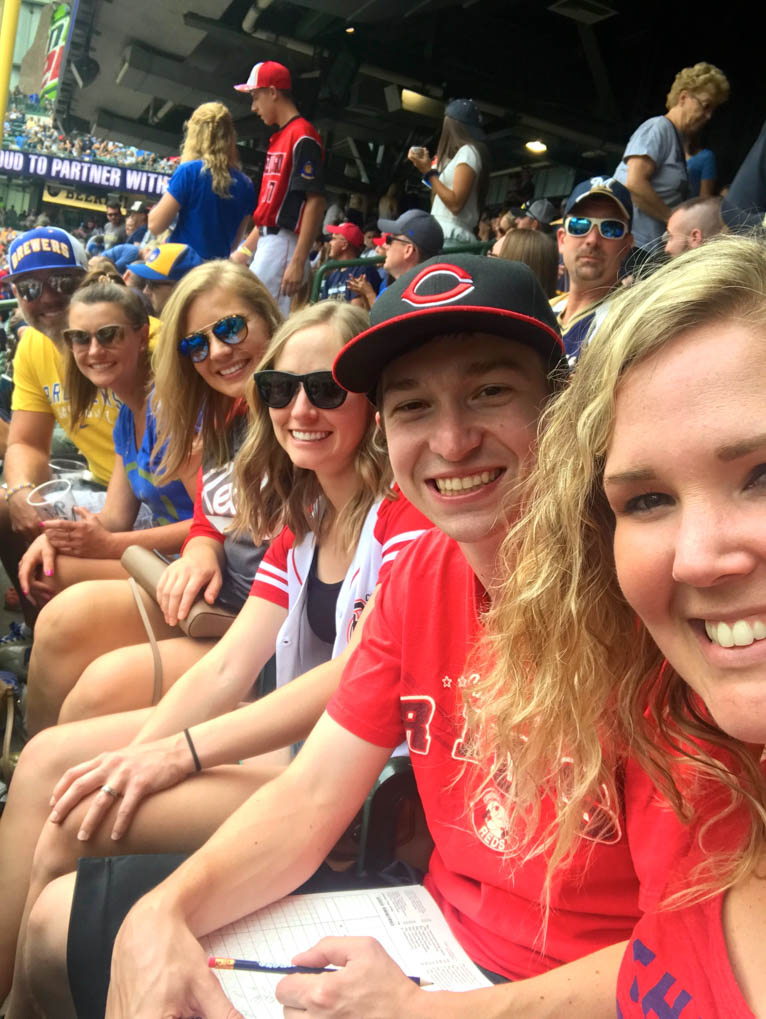 The Reds had the same number of hits as the Brewers, but three fewer runs. Duvall had that two-run homer, Jesse Winker went 3-5, and Billy Hamilton had a hit. Joey VottoÃ¢â‚¬â„¢s hit streak came to an end, but he did have two walks. Eugenio Suarez and Jose Pereza both had a hit, and Tucker Barnhart had two.

Sal Romano did not look good. He has had a couple good starts this year, and I think he could be a decent major league pitcher but today wasnÃ¢â‚¬â„¢t his day. Throwing him out there for the fifth inning — or as long as they did in the fifth — really hurt. A reliever may not have given up the three run home run that Romano surrendered. The bullpen for the Reds pitched three scoreless innings, including two by Robert Stephenson.

This one didnÃ¢â‚¬â„¢t go the Reds way.

This was our first experience at Miller Park. A brother/sister pair of our friends lives near Milwaukee, so we headed up north for the weekend to visit them and catch a game. We planned it so they were either playing the Reds or JordanÃ¢â‚¬â„¢s Cardinals. It so happened that the only weekend that would work under those criteria was a Reds game. The first thing I noticed was the tailgating. This was our eighth ballpark together, and Milwaukee’s tailgating was unlike any other stadium weÃ¢â‚¬â„¢ve been to. It was like we were at a Bengals game or a college football game. It was really neat. At most ballparks, people just park and go in; definitely not here. 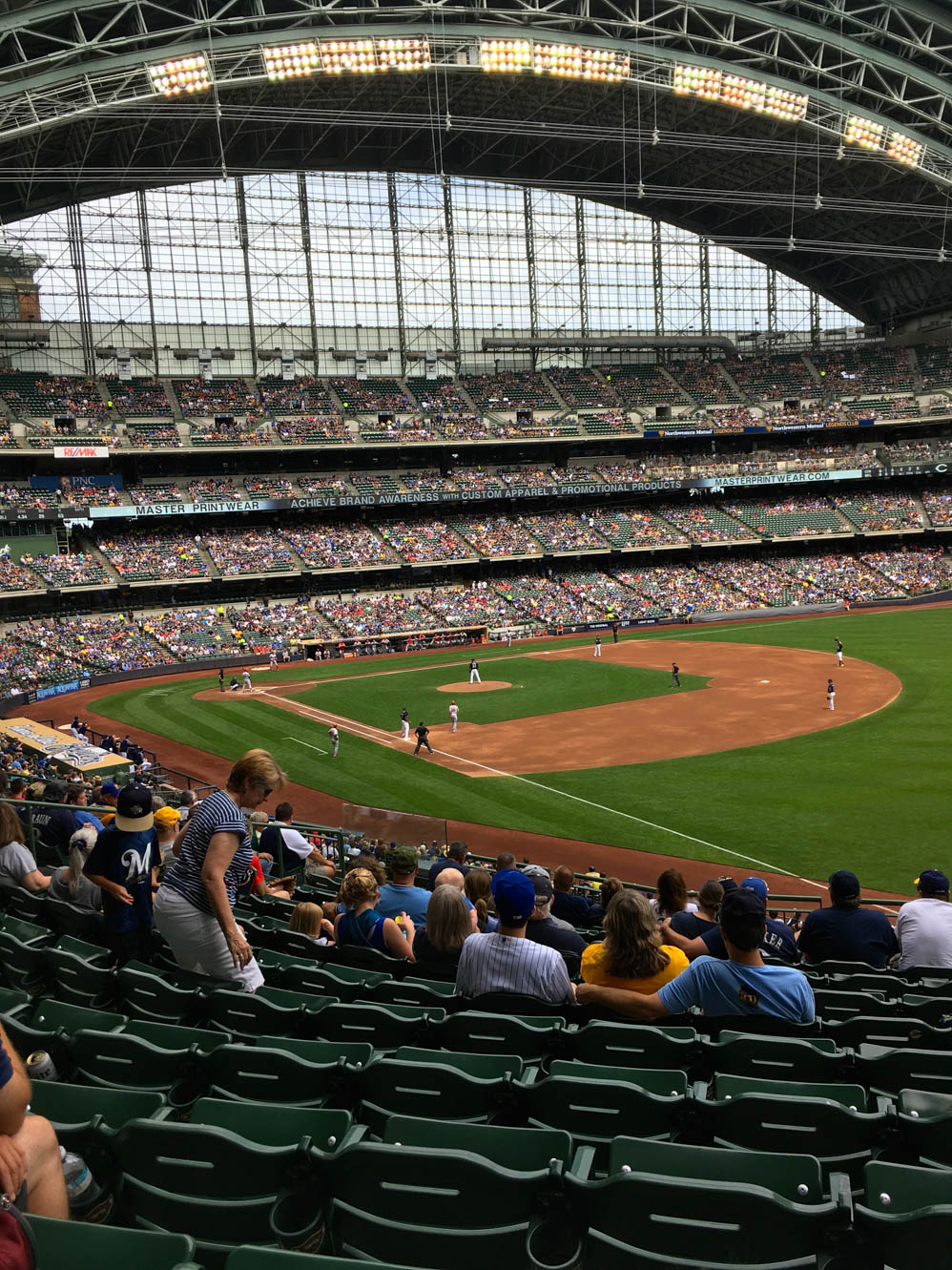 The ballpark looked nicer than I anticipated. We got our picture outside the stadium, along with the statues of Bud Selig, Hank Aaron, and Robin Yount. We then headed inside and did our touristy items. It was a really nice day; so they had the roof open, which was nice. I would say Miller Park’s food options are pretty comparable to Great American Ballpark. They had a nice selection. I went with AJ Bombers Burgers, and it was really good.

Their beer selection is also pretty comparable to GABP — after all they are the Brewers and it is Miller Park. Not being a fan of Miller products, I stayed away from the beer. The promotion for the game was a Bob Uecker 8 ball, that I was pretty excited about. I didnÃ¢â‚¬â„¢t notice a hall of fame inside or by the stadium. There also wasnÃ¢â‚¬â„¢t anything extremely close to the stadium like GABP or Busch Stadium. Overall, though it was a nice park that was pretty comparable to GABP, I would say I prefer GABP.

Again, the outcome wasnÃ¢â‚¬â„¢t like we had hoped, but the experience was great. IÃ¢â‚¬â„¢m excited to continue to see Winker get at bats. I would recommend going to a game here. It was a lot of fun, even though I could do without the guy behind us yelling “Traitor!” every time Scooter Gennett came to bat. It took a lot out of me to not turn around and say, “You waived him.” I wouldÃ¢â‚¬â„¢ve preferred not to see Bernie Brewer go down the slide to finish the game off. It was fun though, and was good to see some great friends and go to the game.

As always, Redleg Nation encourages you to send us a report and pictures of all your visits to enemy ballparks around Major League Baseball. You can check out the previous outings enjoyed by loyal members of the Nation by clicking here: Behind Enemy Baselines.

The list below shows all the stadiums we’ve covered in this series. If you plan to attend a stadium that’s not on this list — or if you’ve visited one previously and would like to share your experiences/pictures — please let us know. (If you have a report from one of these that we’ve already posted, we’d be happy to consider it for publication, too. We can never have too many reports of Nation members in the wild.)

Even better, if you have Redleg Nation gear, we’d love to see you wearing it behind enemy baselines. Send us the pictures!