It started in the summer of 2005. I was 14 going on 15. My sister had a gymnastics competition in Eau Claire, Wisconsin, and my parents, as they often did, made it a family trip. At the time, I was still fairly new to baseball, having just become a fan a few years before. But I wanted to go to a game. So, with a little coaxing from me, my parents decided to buy some tickets. We drove to Minneapolis for a Twins game at the Metrodome (a horrible stadium for baseball, by the way). On the way back to Ohio, we stopped in Chicago for a 4th of July game at then-U.S. Cellular Field (now Guaranteed Rate Field).

In the years following that trip, I was busy finishing high school and going to college. The ballpark visits were put on hold, with the exception of San Diego and Anaheim, thanks to a West Coast family vacation. However, during this time, my dad was travelling a lot for business and made it a priority to go to different ballparks. It was this that inspired me to start saving money to be able to visit ballparks myself. In 2011, I tagged along on a trip he took to Chicago, in order to go to Wrigley Field. Since then, IÃ¢â‚¬â„¢ve made a road trip almost every year. Now, IÃ¢â‚¬â„¢ve been to Detroit, St. Louis, Atlanta (pre-SunTrust Park), Cleveland, and Pittsburgh.

This season, I really wanted to do an East Coast trip. After looking at the 2017 baseball schedule early in the year, I realized the best time to go was in late June. I would check off three ballparks and see the Reds at one of the three.

The first stop was Citizens Bank Park in Philadelphia. It reminds me a lot of GABP. Sure, there are little quirks, like the giant Liberty Bell that lights up when a Phillies player hits a home run, the ivy in center field, and the cheese steaks at concession stands. But it still has the same general shape and feel that GABP has. As for the game, the Phillies lost 7-6 in 10 innings to the St. Louis Cardinals on Star Wars Night. Yadier Molina gets booed in places other than Cincinnati. 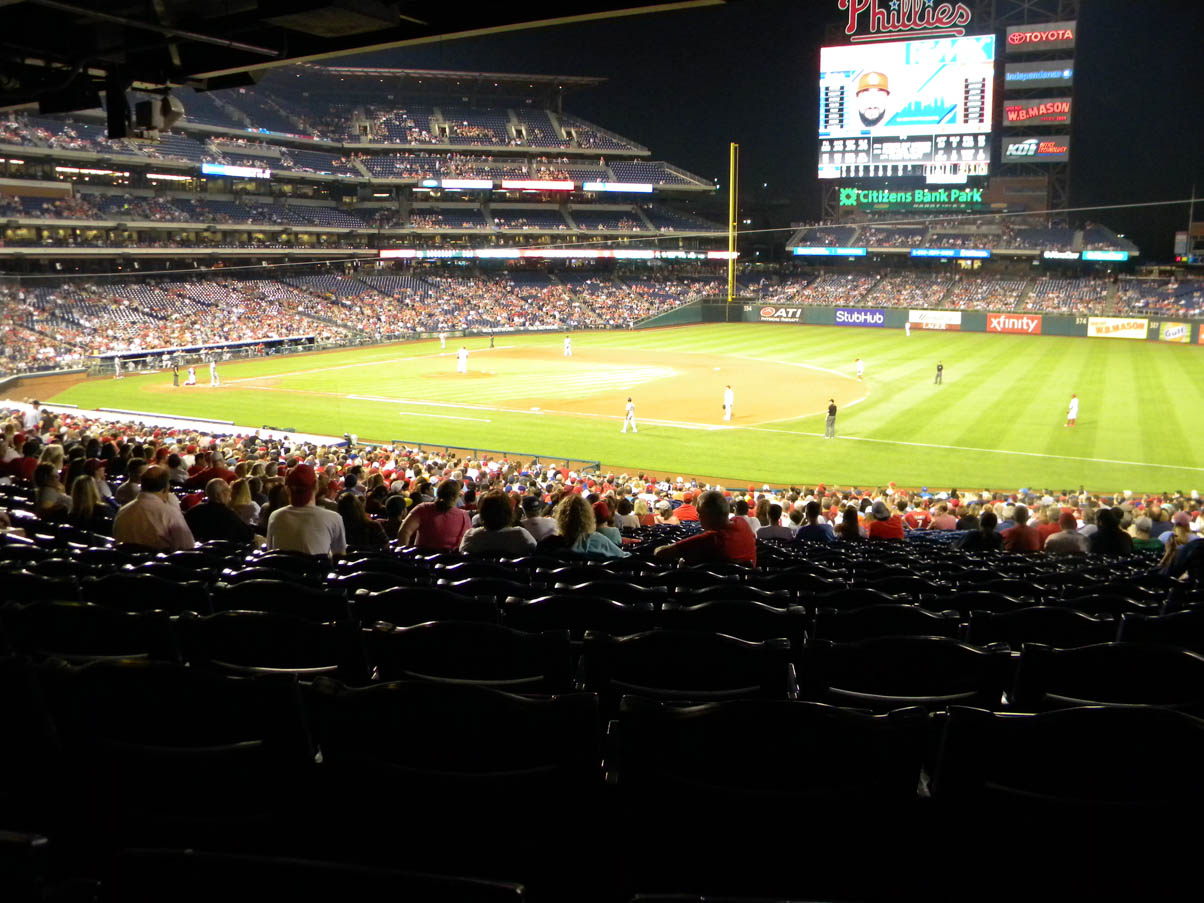 The second stop was Oriole Park at Camden Yards. For years, I have been looking forward to the day I got to attend OPACY for the first time, and it was everything I imagined it to be. When I go to a ballpark for the first time, I like to look for one thing that makes it unique. At OPACY, itÃ¢â‚¬â„¢s the warehouse beyond right field. Eutaw Street, the street between the warehouse and the ballpark, is open to the public every day, even on game days up until about 3 p.m, so if someone wanted to, they could eat lunch on a work day while looking into the ballpark. 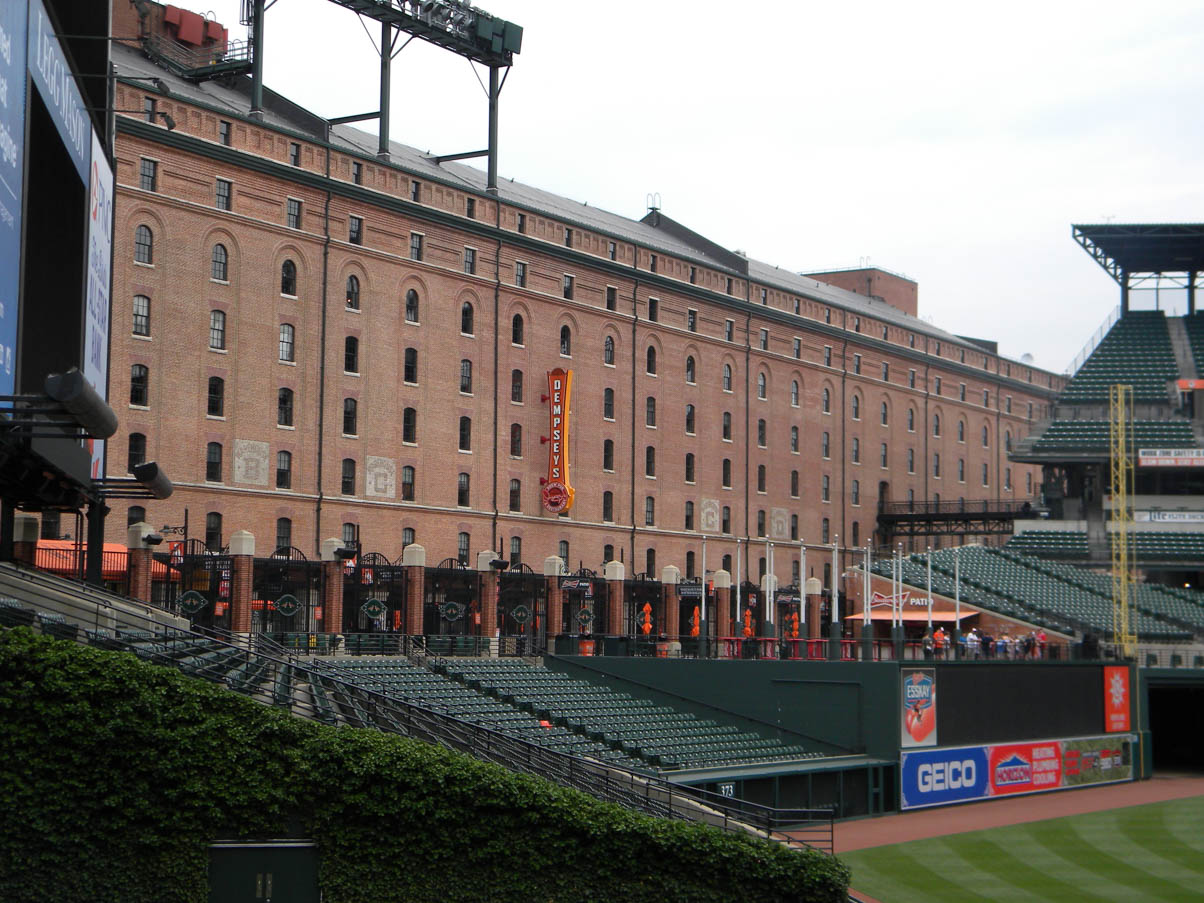 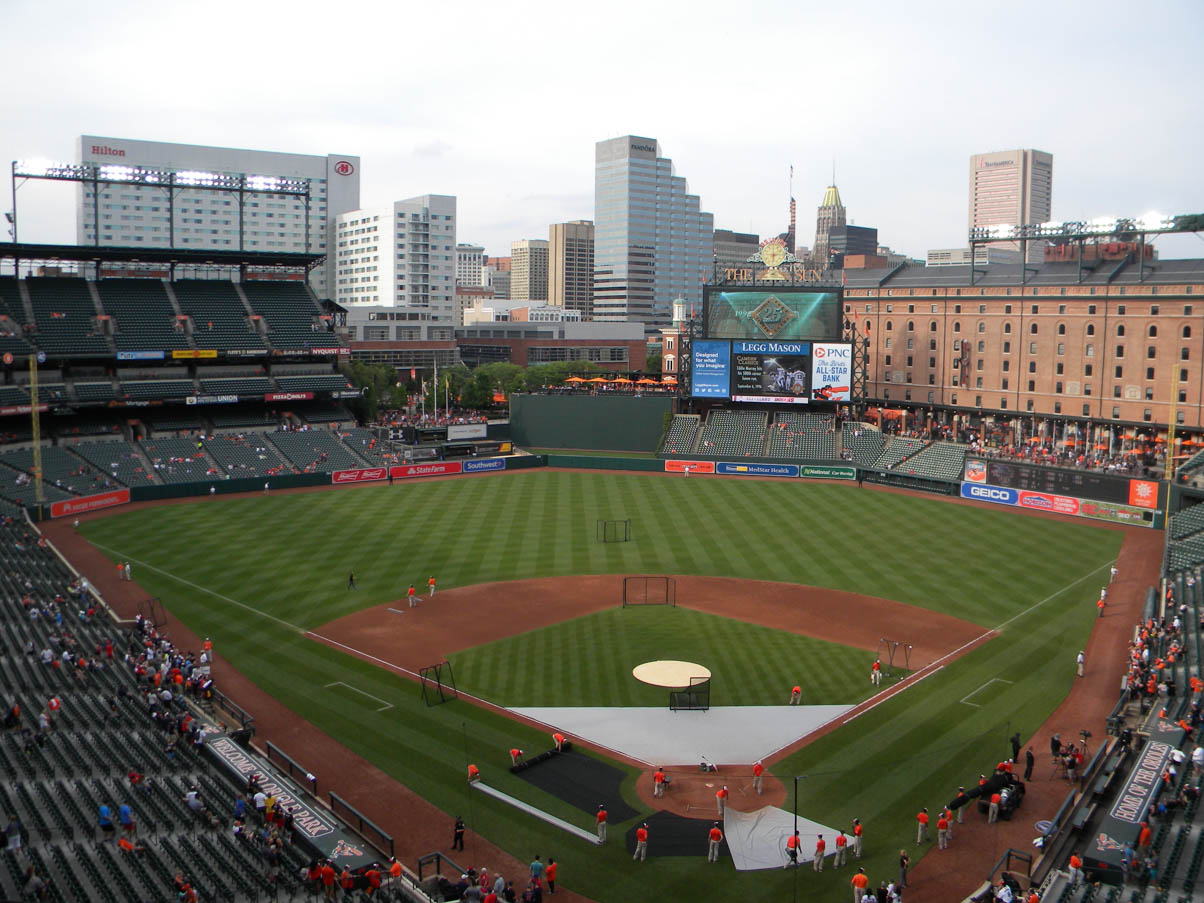 If you visit OPACY, the tour is worth the $9. You get to stand on the field, and you learn a lot about the history about OPACY, including how the warehouse came to be apart of the ballpark and who is the only player in MLB history to hit the warehouse (hint: he played for the Reds in the 2000s and broke some home run records). Because the Orioles were playing the Indians, I was not the only person from Ohio on the tour that day.

While just seeing the ballpark was the highlight of the day, the game wasnÃ¢â‚¬â„¢t very interesting. The Orioles lost 6-3 to the Indians, though there was a leadoff home run by Oriole outfielder Seth Smith.

The final stop of the trip was Washington D.C. and Nationals Park. This ballpark could have been better. The Racing Presidents were probably the most unique thing about the park, but I couldn’t find anything else that stood out. The best part is the view of the monuments from the upper deck, but even those are getting blocked by the massive parking garage and hotels/condos under construction.

The Nationals have very strict food and drink policies, like only bringing in one bottle of water and no other bottled drink, such as pop. I know it was close to a sellout, but to have ushers checking tickets in the outfield upper deck seats seems a little excessive. Nationals Park has a clean, modern feel to it, but there’s nothing unique about it and the strict rules take a little fun away. 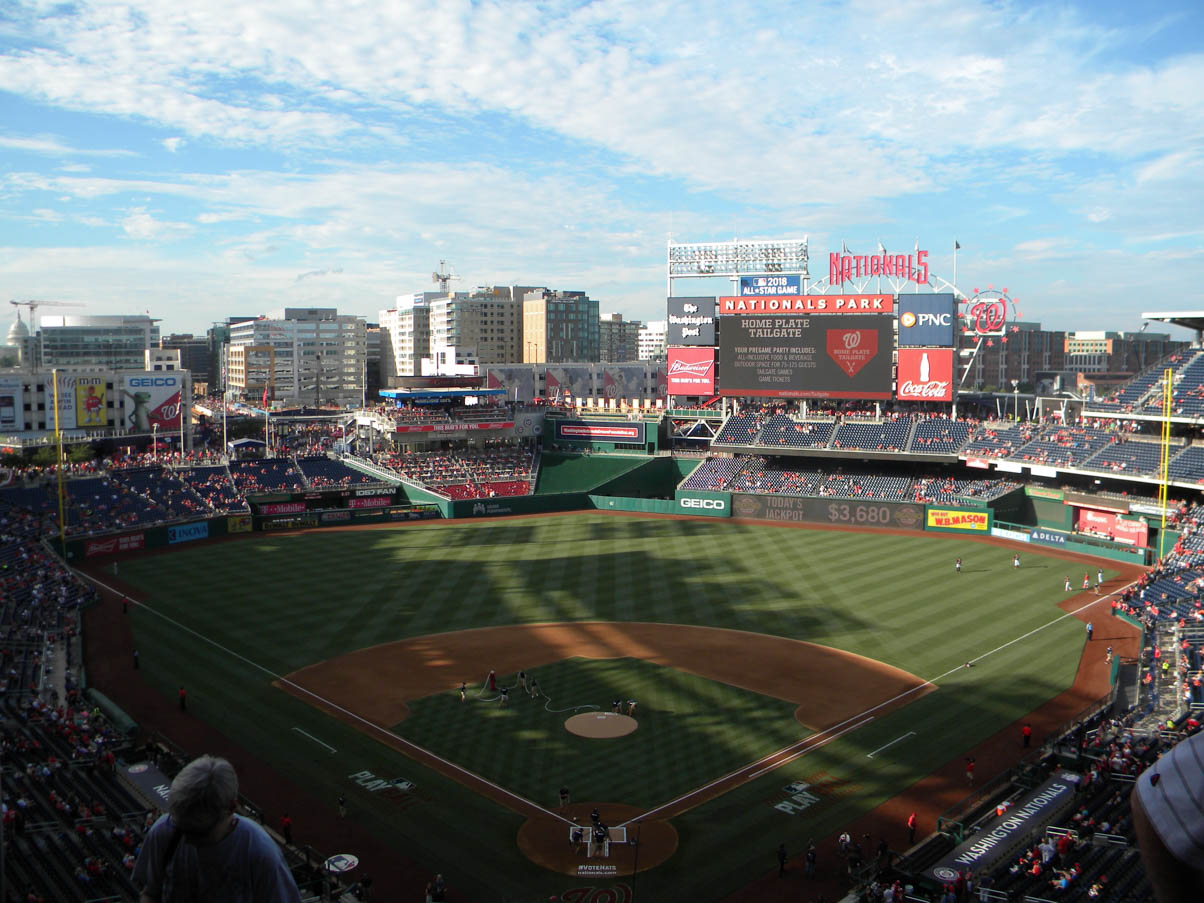 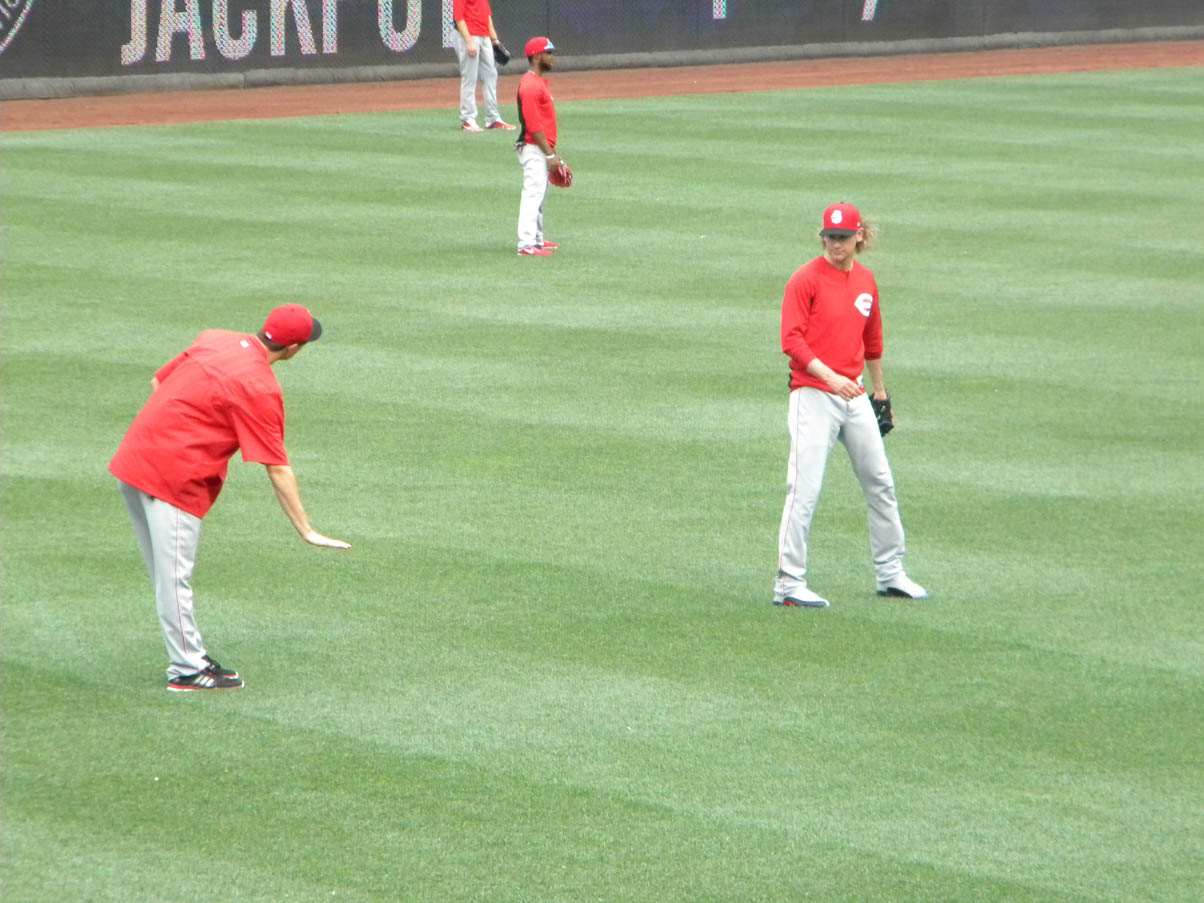 As for the game, Luis Castillo made his major league debut and pitched admirably, but the Reds ultimately lost on a 10th-inning walk off single from Bryce Harper. 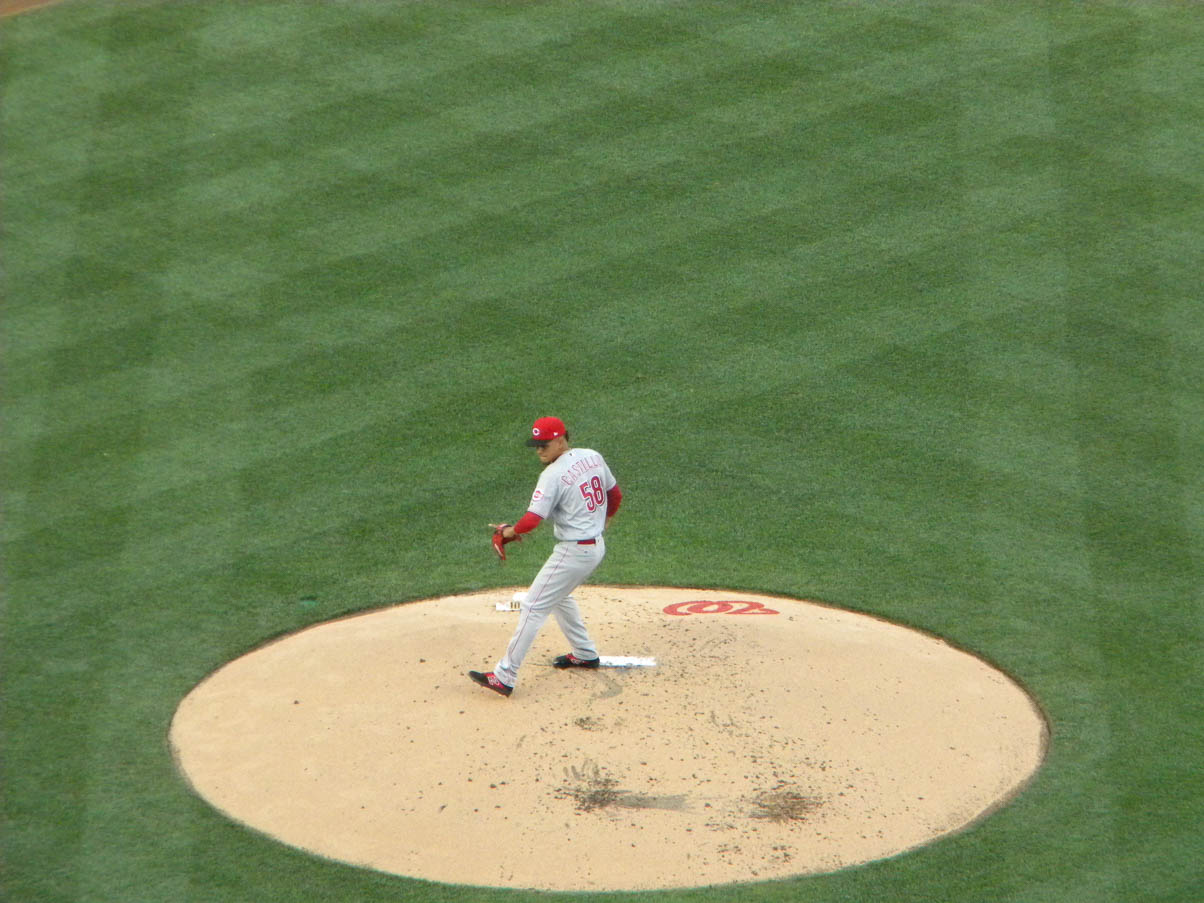 Finally, I was supposed to take a trip to Arizona in September, but unfortunately it was cancelled because of family reasons. So I decided to take a semi-last minute weekend trip to Milwaukee to watch the Reds and replace Chase Field, my fourth ballpark trip this year, with Miller Park.

Miller Park is unique in that itÃ¢â‚¬â„¢s the only park IÃ¢â‚¬â„¢ve been to where nearly everyone tailgates in the parking lot before the game. The roof was open both games I was there, and I heard from a Twitter friend I met up with in Milwaukee that the only time the roof is closed is when it is cold or rainy. Apparently the park does not have A/C, only heat. 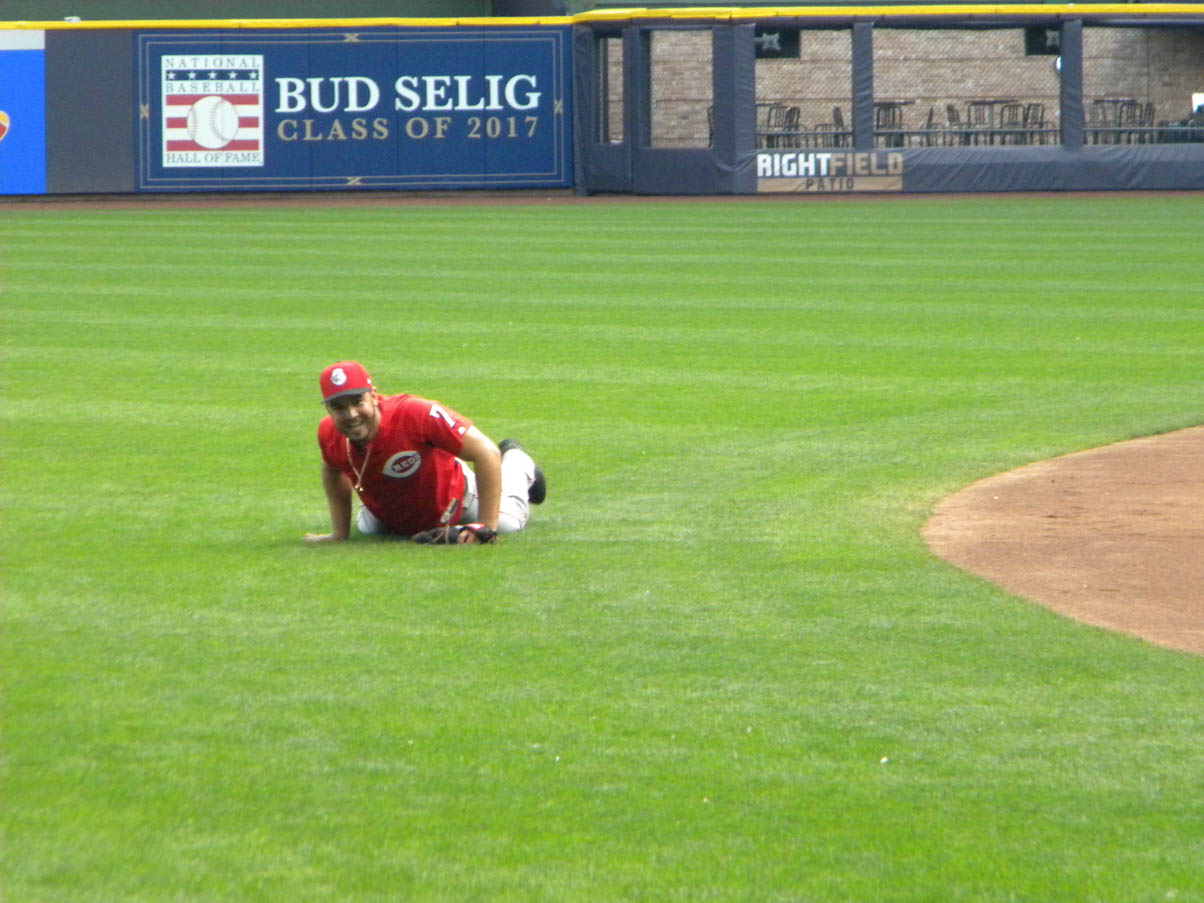 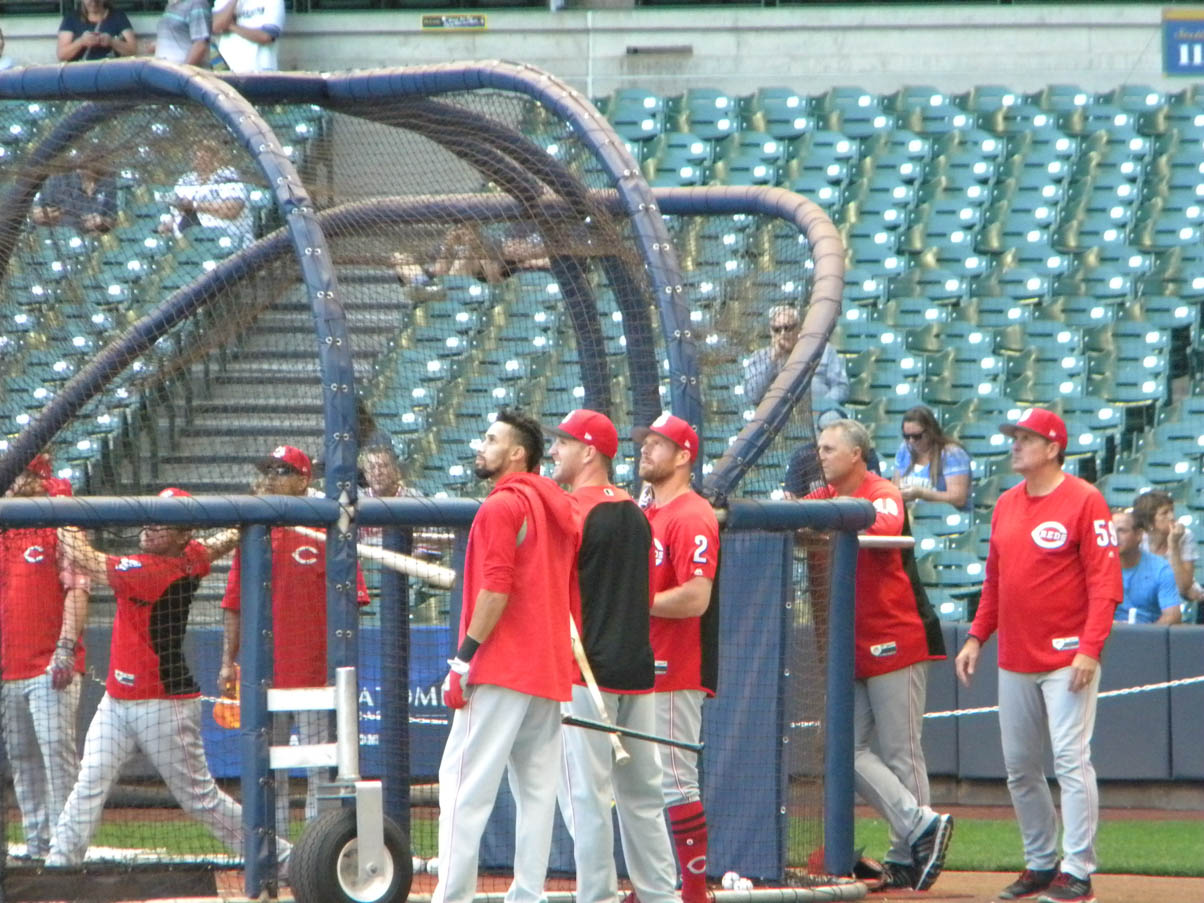 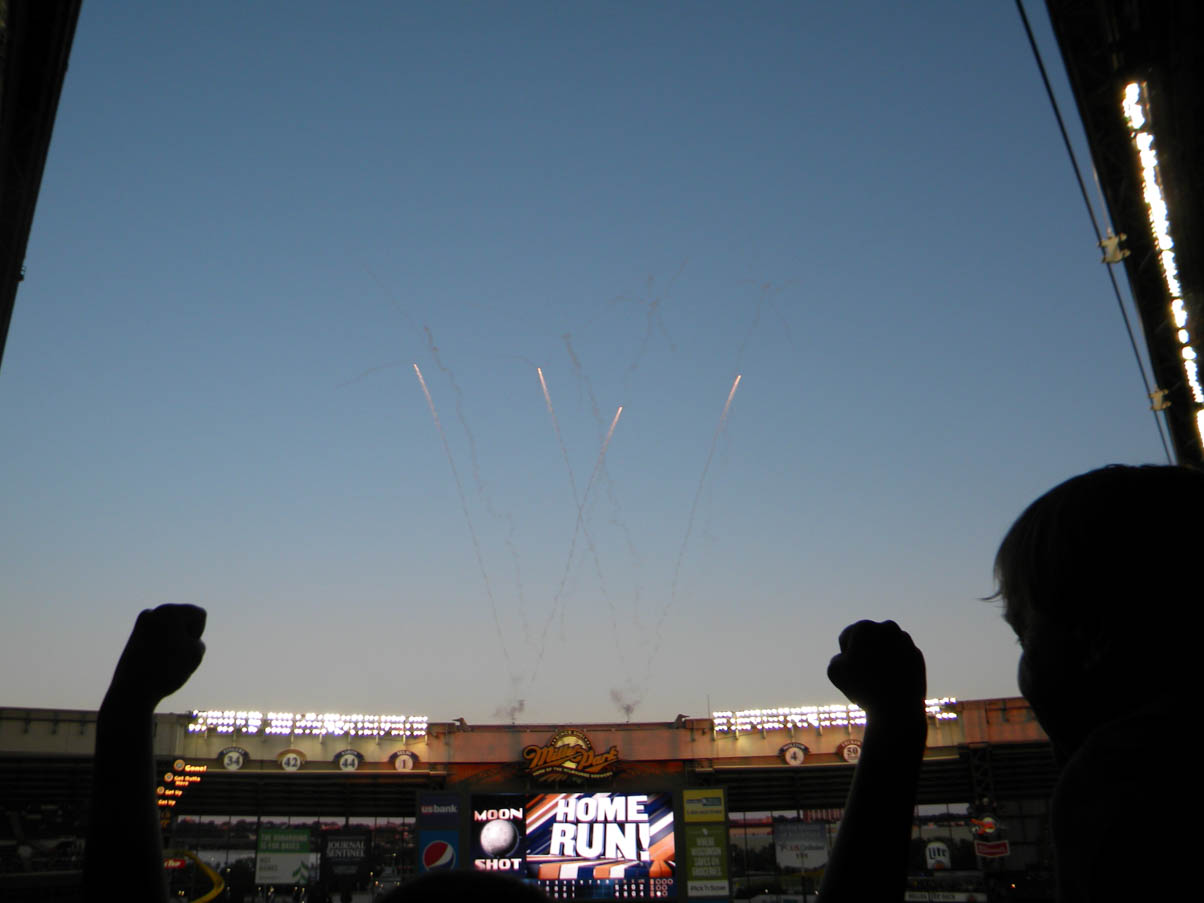 The above photo was after a Brewers player had hit a home run, but I still had to post it. It perfectly captures this kid’s joy of seeing his team hit a home run, while his dad looks on. This is what baseball is about. 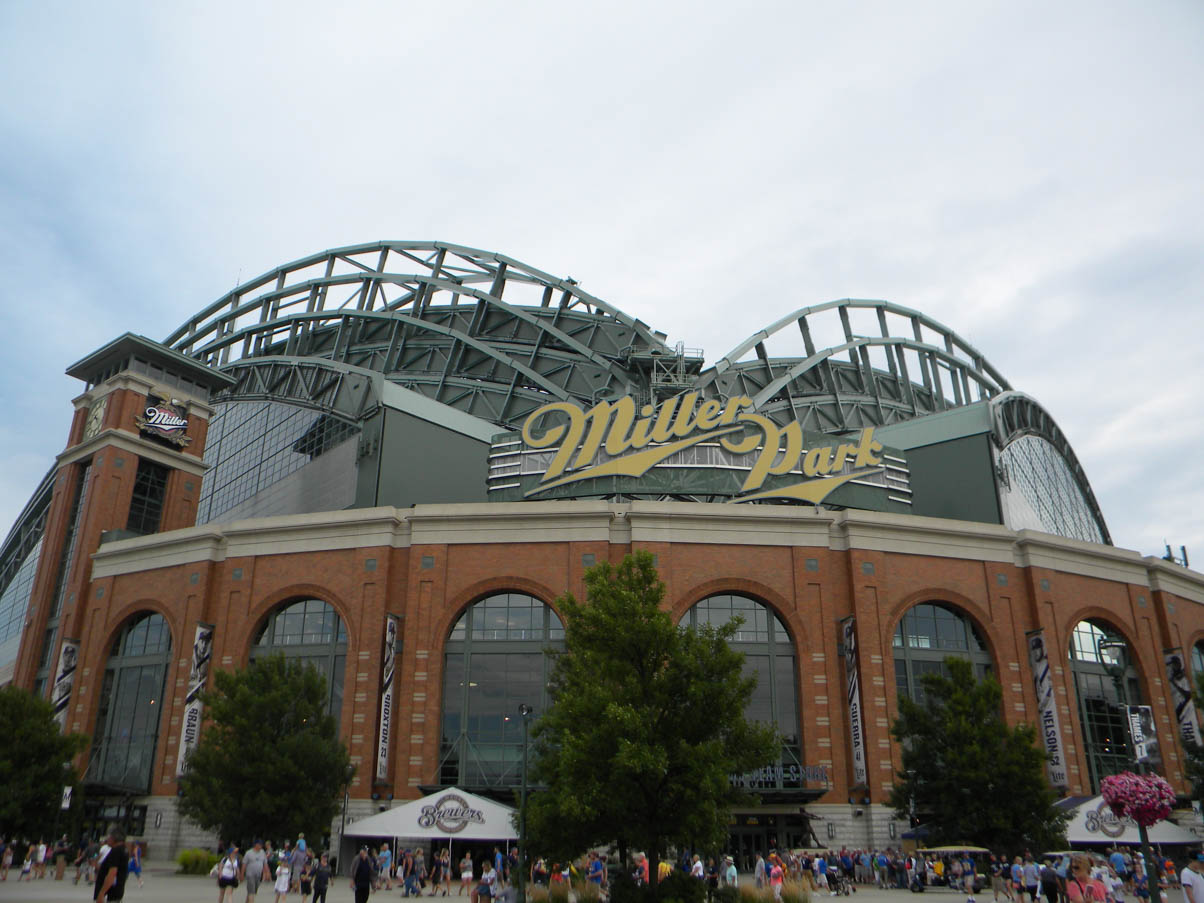 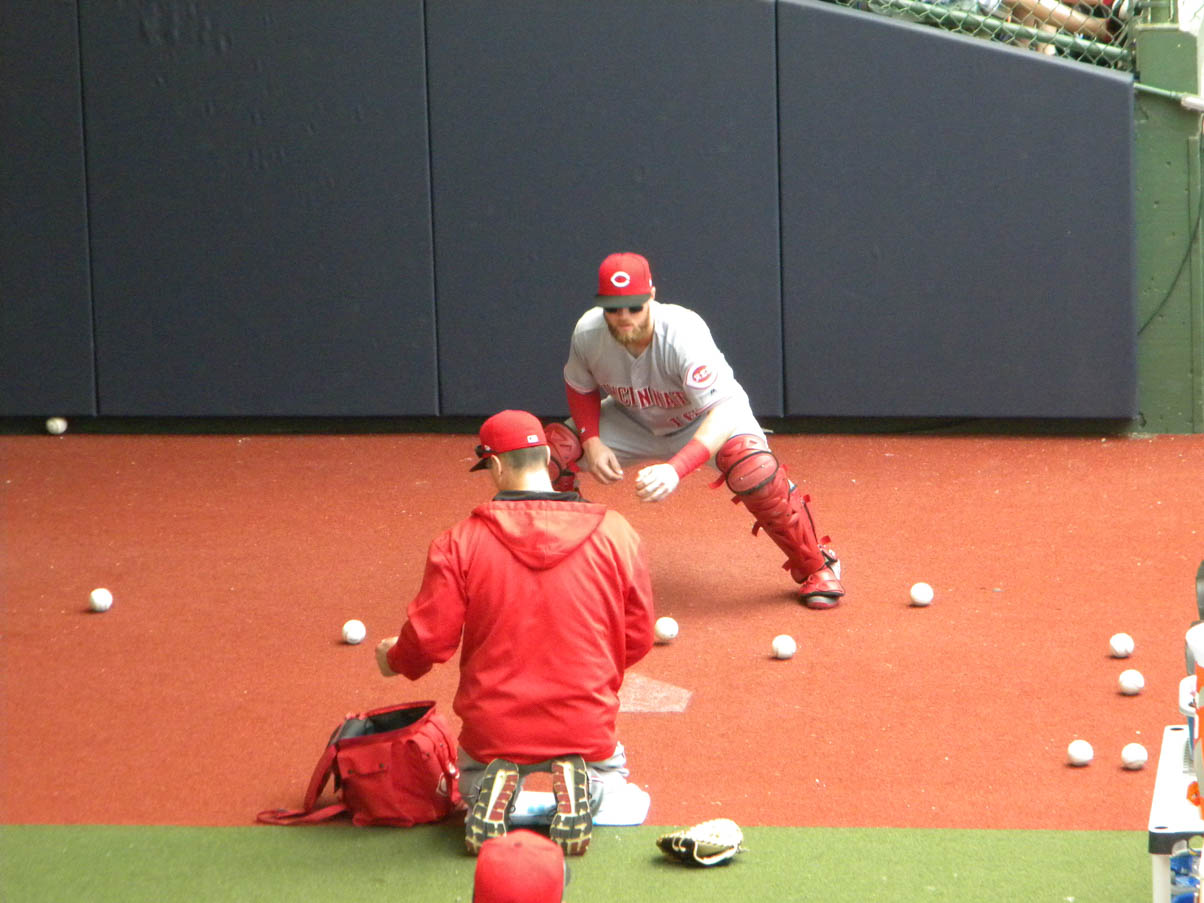 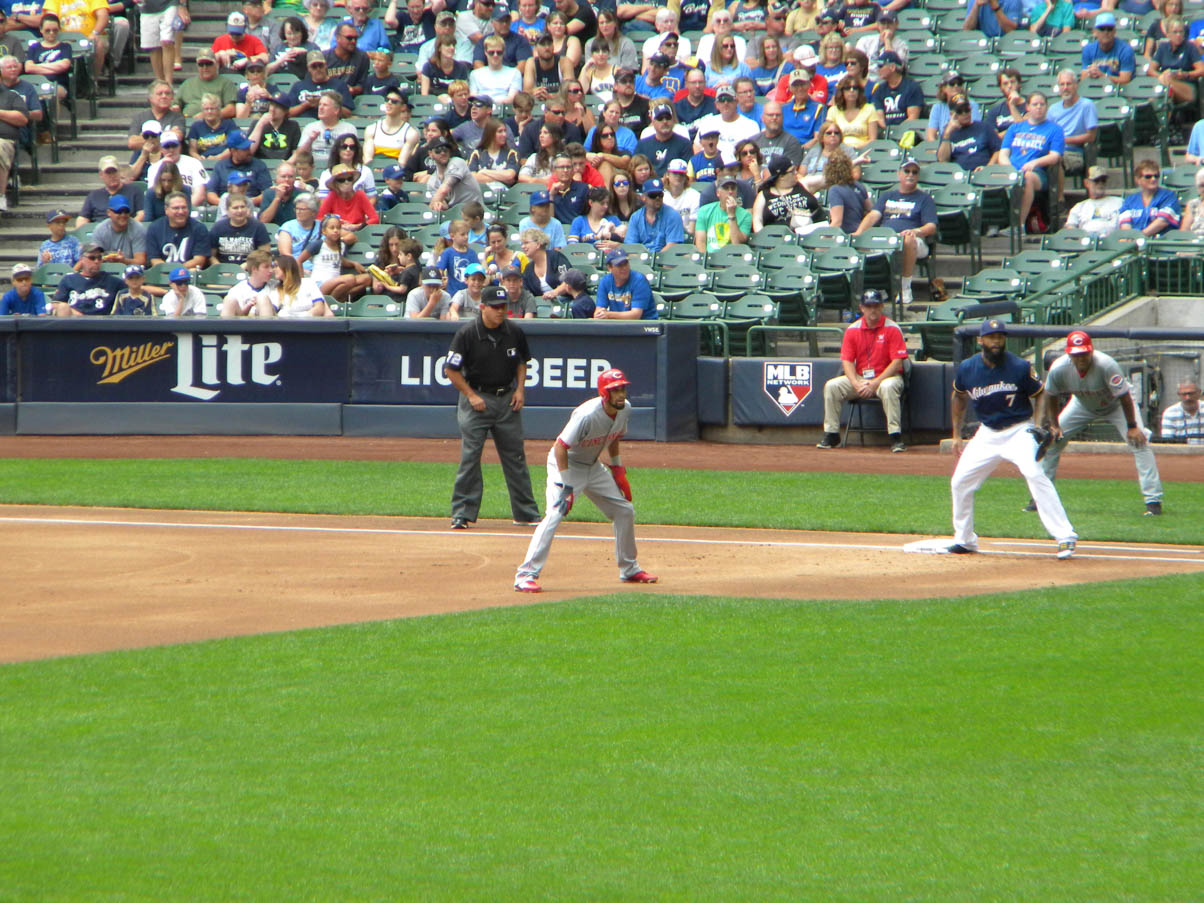 Disappointedly, the Reds didnÃ¢â‚¬â„¢t play well in either of the games I attended, losing on a walk-off wild pitch Saturday night and bad pitching Sunday afternoon. But I did see a number of home runs, including one from Zack Cozart on his birthday.

It is now somewhat of a tradition for me to make baseball road trips. Sometimes I go with my dad, sometimes with family or friends, and once in a while, a solo trip. IÃ¢â‚¬â„¢ve found that I love exploring new ballparks and the cities around them, watching how the home teamÃ¢â‚¬â„¢s fans react to games, and eating local ballpark foods. If you haven’t guessed by now, my goal is to visit all 30 ballparks. Who knows if I’ll ever get there? But I can certainly try.

And one thing IÃ¢â‚¬â„¢ve realized in my travels is that Great American Ball Park is a great stadium and very underrated. It has more local food than anywhere else IÃ¢â‚¬â„¢ve been, and the sight lines are great from anywhere in the park. The Reds are lucky to have such a great ballpark, and the ownership does a great job of keeping it updated and adding new features every season. I can go to all the ballparks in the country, and coming home to watch a game down by the Ohio River will always be the best.

Food (non-GABP): Tacos from Comerica Park, or Chorizo sausage with mac and cheese and pico de gallo from Miller Park