As Reds fans, we have our blinders on a little bit. We’re following this team every single day, game to game, inning to inning, pitch to pitch, and it’s pretty easy to get lost in the weeds. Occasionally, it’s good to take a step and try to see the bigger picture.

I mean, we all know the Reds are 20 games under .500 and 13 games out of first place in the National League Central division. That’s the bottom line. But let’s break it down further, and then look at where individual Reds stand in relation to others around the league at each individual position.

As a team, the Reds’ offense has accumulated the fifth-highest WAR total in all of baseball (17.9 fWAR). Cincinnati ranks behind only the Dodgers and Nationals among National League teams, just ahead of the Cubs and Cardinals. In terms of runs scored, the Reds were fifth before Sunday’s game, when they dropped to sixth. In the overall picture (click the link above and play with each of the categories), the Reds’ offense looks to be slightly above average.

Do you want to know where Cincinnati’s starting pitchers stand? Too bad, I’m going to tell you anyway. Reds starters rank dead last in MLB in fWAR with the grand total of 0.1. I’m not going to discuss any other categories; the results are similarly grim.

Reds relievers are 25th out of 30 teams in fWAR, with a cumulative total of 1.4. The bullpen looks a little better if you look at some of the analytics, but it’s difficult to make the case that the bullpen, overall, has been anything better than average.

Now, on to the individuals. Here’s a look at Reds hitters with an fWAR above 0.0 (click that chart to embiggen it).

CATCHER
Tucker Barnhart is 13th in the majors (9th in the NL) with 1.5 WAR. Devin Mesoraco is 35th overall (17 in the NL) with 0.5 WAR. Barnhart’s WAR is driven largely by his exceptional defense; it’s vice-versa for Mes.

Reds catchers rank 7th in the NL in combined WAR. Ultimately, the Barnhart/Mesoraco combination is not bad, not bad at all.

FIRST BASE
This is fun. Joey Votto is second among all MLB first basemen in WAR, with 4.8 (only Arizona’s Paul Goldschmidt’s 5.3). Votto is far ahead of the #3 guy, Toronto’s Justin Smoak, who has 3.7 WAR. Interestingly, Votto’s defense has improved dramatically over last year, though every first baseman’s WAR is driven by their offense.

Nothing more to say here. Votto is great.

Just ahead of Scooter: our old friend Brandon Phillips, with 1.6 WAR.

THIRD BASE
Eugenio Suarez ranks 7th among all 3Bs in baseball in WAR with 3.0. Strangely, he only ranks 6th in the National League; the NL has a great crop of 3Bs currently. Regardless, Suarez is an exciting young player.

SHORTSTOP
We’re in the middle of August, and I can’t believe that I’m still able to type these words: Zack Cozart is the third-best shortstop in baseball — 2nd in the NL — according to fWAR. Cozart has accumulated 4.0 WAR. It’s just astounding; only LA’s Corey Seager ranks ahead of him. Who is this Zack Cozart, and where has he been the last few years?

For what it’s worth, Peraza would rank 34th among MLB shortstops.

LEFT FIELD
Adam Duvall ranks 11th in the majors among left fielders with 2.2 WAR. He’s 6th in the NL. That’s pretty much what we know about Duvall: he’s a slightly above-average left fielder who can hit a bunch of home runs.

It’s interesting to note that FanGraphs’ analytics say that Duvall’s defense has declined over last year.

CENTER FIELD
Billy Hamilton is 26th among all big league CFs and 12th in the NL with 1.4 WAR. According to FanGraphs’ metrics, Hamilton is the best defensive center fielder in all of baseball. That should give you an idea of just how poorly Hamilton has performed at the plate this season.

RIGHT FIELD
Scott Schebler, after ranking more highly earlier in the season, has collapsed to #31 on the MLB charts among right fielders; he’s 13th in the NL. Jesse Winker, Patrick Kivlehan, and Phillip Ervin are tied for 46th with 0.0 WAR.

Reds RFs, cumulatively, are 10th in the National League. Not good. 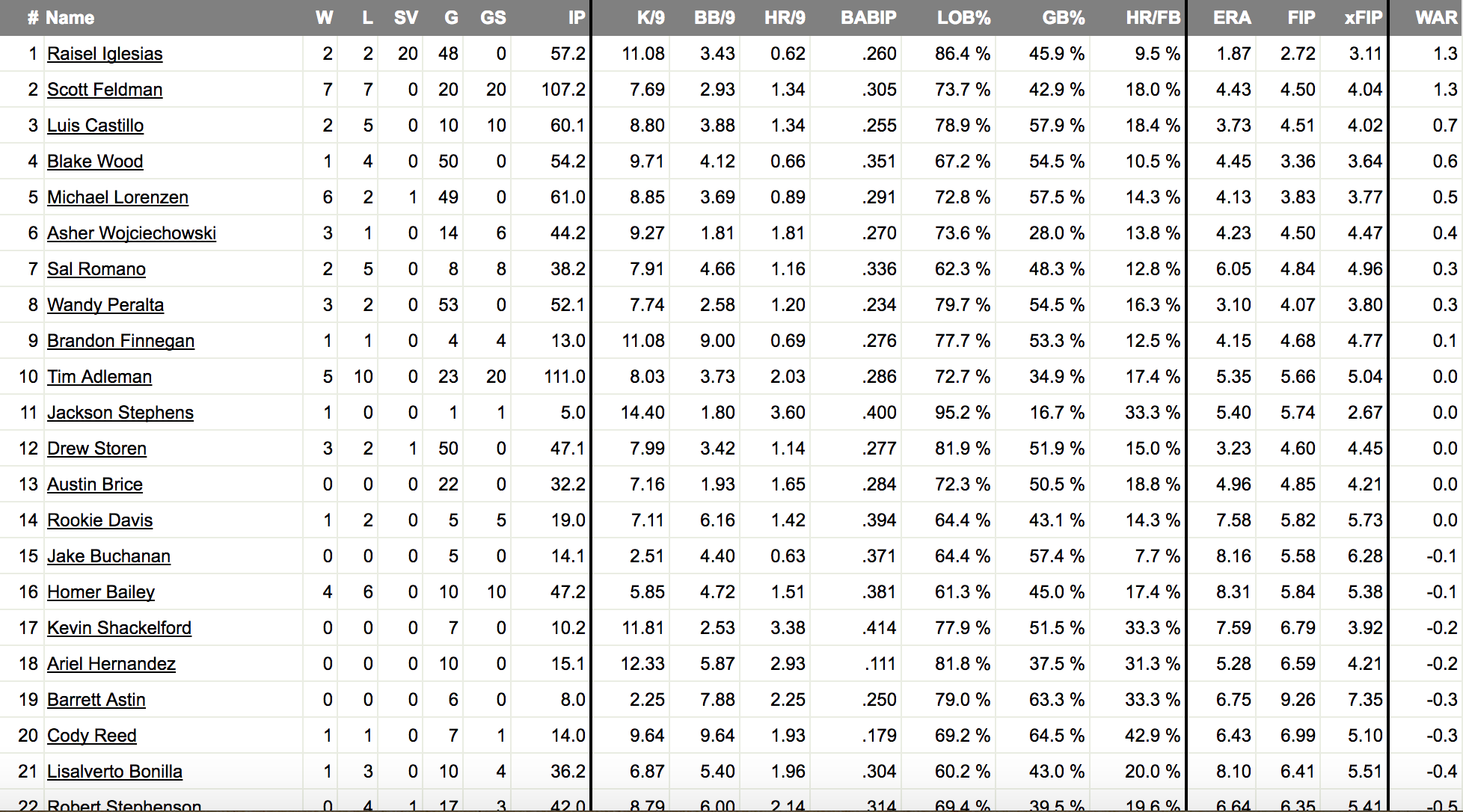 STARTING PITCHER
This is ugly. Scott Feldman is ranked in a tie for 41st among only National League starters with 1.3 fWAR. Next is Luis Castillo, at 59th (0.7 WAR), followed by Sal Romano (0.3) at 71st. Among starters with at least 30 innings pitched, Amir Garrett is next-to-last, with -0.9 WAR.

Yes, there are limitations with comparing pitchers based solely on WAR; this is just a surface examination of the league’s pitchers. But I don’t have the heart to dig into any more numbers. Cincinnati’s starting rotation has been almost bad beyond words.

RELIEF PITCHER
Raisel Iglesias ranks 8th among National League relievers with 1.3 WAR. Next highest is, surprisingly, Blake Wood, whose 0.6 places him in a tie for 26th in the NL. (If Wood is the second-best Reds reliever, you start to see why this bullpen may not be as good as we have given it credit.) Michael Lorenzen is tied for 34th with 0.5.

Other Reds relievers among the top 100 in the NL are Wandy Peralta and Asher Wojciechowski, tied for 57th with 0.3 WAR. On the other end, based solely on his performance as a reliever, Robert Stephenson ranks 235th in the NL, with -0.4 WAR.

What do you think?