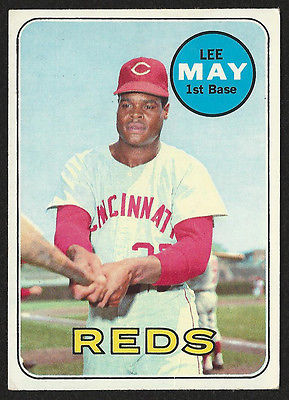 We at The Nation have lost The Big Bopper.

We lost a beloved player, a guy who played every day without a gripe, played hurt and never got involved in drama on or off the field. We lost a big, strong quiet leader who had a connection with Cincinnati Reds fans.

We have lost Lee May, who died of pneumonia in a Cincinnati hospital on July 29 at the age of 74.

Tommy Helms coined Lee as Ã¢â‚¬Å“The Big Bopper from BirminghamÃ¢â‚¬Â and he was right. It was the perfect nickname for May.

Lee May was a 6’3Ã¢â‚¬Â right-handed slugging first baseman for the Reds. He was drafted by Cincinnati in 1961 and steadily worked his way through the minors. When he made his major league debut at Crosley Field on September 4, 1966, The Big Bopper announced his presence by crushing a game winning home run against the New York Mets. Lee May had arrived.

May quickly became a valuable cog in the early Big Red Machine. Often overshadowed by Johnny Bench and Tony Perez — and batting 5th in the order — Lee May still drove in 94 runs during the 1970 season.

In the last game played at Crosley Field on June 24, 1970, Bench launched a home run in the 8th inning against Juan Marichal to tie the game 4-4. The Big Bopper then came up and socked a home run to give the Reds an eventual 5-4 win and thrill a crowd of 28,000 that closed Crosley.

Later that season, during the 1970 World Series, May was Cincinnati’s best hitter. He batted .389, hit two home runs and drove in right runs. His majestic three-run homer off Orioles reliever Eddie Watt gave the Reds a 6-5 win in Game 4.

And then Bob Howsam orchestrated Ã¢â‚¬ÂThe TradeÃ¢â‚¬Â in November 1971, Ã‚Â He sent the right side of the Reds infield (May and Helms) to Houston for Joe Morgan, Cesar Geronimo, Denis Menke, Jack Billingham, and Ed Armbrister. This major trade shocked baseball and Reds fans were aghast. As we now know, the trade retooled the Big Red Machine and resulted in consecutive titles in 1975 and 1976.

But Lee May kept hitting and knocking in runs for the Astros and later the Baltimore Orioles and the Kansas City Royals. He finished his 18-year career with 354 homers, 2031 hits and 1254 RBI’s. After the Royals released May, they signed him as a coach and he got a World Series ring in 1985.

I was fortunate to meet Lee May twice. The first time was at a Reds function at the Netherland Hilton in downtown Cincinnati in 1985. The second was at Great American Ballpark during a luncheon featuring Brooks Robinson, Rich Gossage, and May. Brooks and the Big Bopper spoke about their careers and the ’70 World Series and Goose talked about his election to the Baseball Hall of Fame. (During a Q and A session, I asked Gossage if he was ever afraid of any hitter in his career. He didn’t like the question. But he admitted in a clutch situation, he didn’t like George Brett to come to the plate.)

But afterwards, I got to speak with May for about 10 minutes. He was soft spoken and polite. We talked about that famous home run he hit that Ã¢â‚¬Å“closedÃ¢â‚¬Â Crosley Field. Ã¢â‚¬Å“I had to hit one after Johnny did,Ã¢â‚¬Â he said with a smile. Ã¢â‚¬Å“I was pumped up.Ã¢â‚¬Â We talked about the trade. We talked about the Big Red Machine and what it was like for him to be in that lineup. I told him about a homer I saw him hit off Nelson Briles at Busch Stadium in 1969. (The Reds and Tony Cloninger got shellacked that day, 11-3.)

Lee May may have played for Houston, Baltimore and KC before he retired in 1982, and he was inducted into the Orioles Hall of Fame in 1988. But he will always be a Cincinnati Red, first and foremost.

He cemented his legacy during the seven years he played in Cincinnati. He’s justifiably in the Reds Hall of Fame. He played on some great Reds teams, hit some big home runs, was a clubhouse leader and a fan favorite.

Lee May was our guy. He was The Big Bopper.