Last week I lamented the lack of humorous material in the Reds’ season of late, yearning for the September call-ups so we could do all sorts of future projections. But then this Wednesday, lo and behold, the MLB goes and announces Players Weekend, complete with nicknames on jerseys. Ask and you shall receive I guess.

In honor of this incredible gift of the league actually embracing fun, I will be ranking all of the released Reds’ nicknames. Yes, there’s a clear winner. No, I will not accept complaints.

Which Reds #PlayersWeekend jersey nickname is your favorite?

There they are. The most glorious collection of Reds’ jerseys I’ve ever seen.

(Jose Peraza also has a nickname jersey despite being excluded from this picture. His nickname is “Miguelangel.” Jesse Winker is apparently in the same boat and will be sporting “Wink.” One of those omissions feels targeted.)

The laziest nicknames in the world are those assigned by high school baseball coaches. They all follow the exact same pattern Ã¢â‚¬â€ add a “y” to some part of the kids name. Instant nickname. In high school, I was Jenksy. My friend Brad was Bradley. The only worse type of high school baseball coach nickname is the shortening of the last name. So Turner to Turn and Morris to Mo and so on and so forth. There’s no imagination in any of these names.

Again, the ask and it shall appear principle. The only reason Wojo ranks above Finny, Duvy and Barney is that Wojo sounds cool. If Asher didn’t have a great last name to begin with, he’d be pulling up the year of this list. Same principle goes for Scott Schebler. As for Jesse, he’s lucky that Wink sounds like it could have a great backstory. It’s a bit of a gotcha nickname where you think it might be exciting but really it’s just horribly disappointing.

I hate high school baseball coach nicknames so much that using your first name qualifies as a better nickname. Not much better, but better all the same.

The man deserves points for at least sticking to the spirit of a nickname and shortening the right name. It’s boring but it’s a classic.

Now we’re getting somewhere. These are still shortenings of the last name, but some creative liberties have been taken. There’s some pizazz, some flair, and no violations of the unwritten rules. Young and old alike can appreciate these nicknames, even if they aren’t the most exciting.

Google Translate is telling me that Wandy’s nickname means The Fat, which could be wrong so if so please correct me. But, assuming it is right, I’m not for Wandy calling himself fat! All for self-deprecation, but love your body Wandy. Also, listed at 220 pounds, Wandy is only the ninth heaviest on the active roster. If you’re going to mock yourself Wandy, at least do it accurately.

Is this the name of a wife? Girlfriend? Sister? Daughter? I just don’t understand Eugenio.

Best I can tell, this nickname is product placement, which a) is boring, b) a violation of the rules, and c) kind of cheeky so I respect it. Keep making that money Drew.

Rocking a classic @homage shirt in honor of @Hinchtown and @ConorDaly22 for todayÃ¢â‚¬â„¢s Indy 500. Go get em fellas. pic.twitter.com/VDfiw5azEN

I’m choosing to believe that Arismel is actually Arismendy’s middle name and not just a shortening of his first name because then that means that his initials are AAA, which you just can’t top. The towing service is impeccable. True professionals.

You know you’re getting to the better nicknames when Bone falls this low on the list. However, I would have preferred either Billy Bone or Hambone on the back.

Luis “The Stone” Castillo. I don’t understand it but I like the ring.

What am I believing in? Does it matter? Does Patrick think the Reds are going to make the postseason and that’s why he chose this? Can he please play at some point that weekend and get on base with the intent of rounding third and heading for home so that Billy Hatcher can yell “Don’t Stop Believe!”? (Update: This nickname actually derives from Eric LaGrand’s “Believe” motto. LaGrand was the Rutgers’ football player who was paralyzed during a game in 2010.)

Award for the most accurate nickname, though the descriptor “Little League” would have made it pitch perfect.

I know this is a bit of a play off of the end of his last name, but Michael Lorenzen also just seems to embody the ethos of a yoga teacher. I think it’s the pecs that give it away.

Another one I don’t quite understand as to how it was arrived at, but it sounds so much cooler than most of the others. On the downside, Miguel Angel was the leader of the Guadalajara Drug Cartel Wikipedia tells me. We’ll call it a draw?

By far the best story behind a nickname. Also, I really miss Shin-Soo Choo. What that year could’ve been.

Okay so here's a story on the rabbit nickname. Don't worry, I'll translate it here on the thread https://t.co/r8NceFGReP

This nickname is singlehandedly enough for me to want Bronson to pitch again. Imagine him doing anything of note and having this jersey become a baseball relic. Or just the photography. It’d be like Woodstock on a circular mound of dirt.

It will never not be funny to me that Scooter used his real name as his nickname. My sense of humor has also been described as “undefined” and “Wesley do you actually laugh at anything?” Yes, yes I do.

I need to know. Someone give me the story. And please say it’s because he keeps reheating the fifth starter’s role.

In keeping with the spirit of the post, everyone with a nickname above number 15 in the previous list is fined for being an uncreative fool. I am indeed not entertained.

Fine:Ã‚Â Have Free Love start the game with Believe behind the plate. It’s worth it.

Fantasy Baseball Ã¢â‚¬â€Ã‚Â My team is still bad, nothing to see here.

Authorial ViewsÃ‚Â Ã¢â‚¬â€ Doug is gaining on me. So is Matt. The walls are closing in. I’ve realized my lead won’t last forever. I’ve been too comfortable. 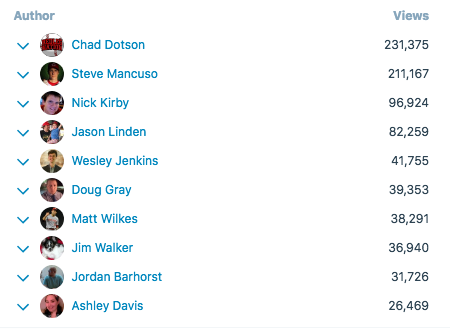