The Reds got off to a big start on Sunday afternoon. The first five Reds batters reached base, including a three-run homer from Joey Votto. The Reds forced Adam Wainwright to throw 45 pitches in the first inning, and it could have been even worse for Wainwright if not for an alert double play by Matt Carpenter.

Things escalated quick and without warning for Homer Bailey in the second inning. The Cardinals had five consecutive hits of their own, including three doubles on three consecutive pitches. The Reds out of nowhere found themselves trailing 4-3 after two innings. Bailey got himself out of a jam in the third inning, but couldn’t find his way out of the fourth inning. Bailey finished the day with 10 earned runs allowed.

Things did get much better, with the exception of David Letterman being interviewed by the FOX Sports Ohio crew sitting in the diamond seats. Reds fall 13-4. 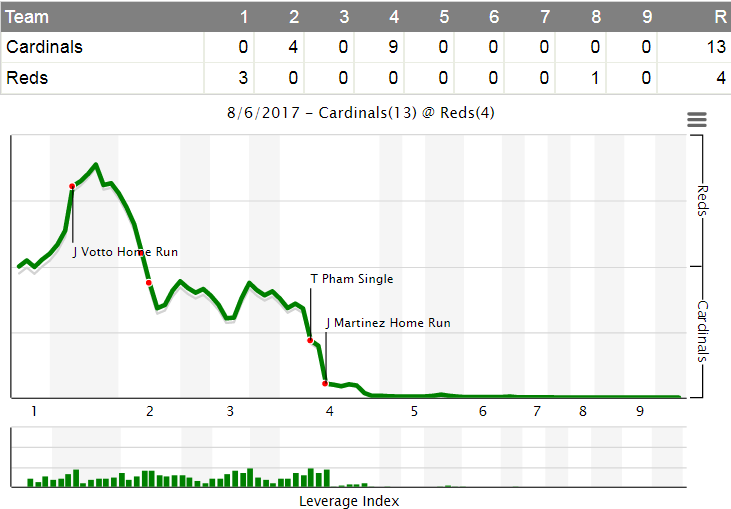 Joey VottoÃ‚Â hit another home run (93.5 EV, 345 ft), and it was a 3-run shot in the first inning that just barely cleared the rightfield wall. It was a big milestone homer too, as it was the 250th of Votto’s career, and the 135th of his career at GABP, tying Jay Bruce for the record. Votto also now has an 11-game hitting streak.

The Reds offense had some great, patient at-bats against Wainwright. They actually chased Wainwright after just three innings because they forced him to throw 88 pitches.

Zack CozartÃ‚Â returned to the Reds lineup, played the entire game, and collected a hit.

Homer BaileyÃ‚Â had been pitching pretty well for the most part since the start of July. He started out strong today, getting through the first inning facing the minimum after picking off Tommy Pham. Then the wheels fell off. Bailey at one point gave up 3 doubles on 3 consecutive pitches, and was done in after giving up a grand slam to Jose Martinez. Bailey’s final line: 3.1 IP, 10 H, 10 ER, 4 BB, 3 K.

I am a big Homer Bailey fan, make no mistake about that. I thought the criticism after his first couple starts coming back from a long DL stint was misguided. Ã‚Â While I do think we should still have patience with Bailey, I do get the frustration after today’s start. The 4 walks today are what really kills me. Bailey has to better for the Reds.

Just one of those days.

Homer Bailey reassures there was no setback in his recovery, it was just one of games. pic.twitter.com/saDssiImG4

Billy HamiltonÃ‚Â appeared to get a little banged up, and left the game early. It sounds like it was purely precautionary as the Reds were getting their brains beat in.

David Letterman and his friend Bill reveal to @JimDayTV what the legendary Late Night host has been doing in retirement. pic.twitter.com/0KdMLt00ma

In a game the Reds are losing 13-3, analyst Marty Brennaman just declared turning point was an at bat by Jesse Winker.