The Reds brought the tying run to the plate in the 9th inning, but the couldn’t capitalize. Jose Peraza battled, forcing the Cardinals closer Trevor Rosenthal to throw nine pitches, but eventually was called out by a step on a groundout of a 100 MPH fastball to end the game. The Reds are still 8-4 against the Cardinals in 2017 despite the loss. It was the Cardinals first win at Great American Ballpark in six attempts this season.

Luis Castillo had his worst command of the season, walking five batters, and plunking two more. Castillo still was able to record his fourth quality start out of his last six starts. Joey Votto hit his 28th home run on the season, but that would be the extent of the Reds offense tonight. The Reds will go for a series win tomorrow, which would make them 3-1-1 in series against the Cardinals in 2017 (the Cardinals only “series win” was a makeup game on 6/26). 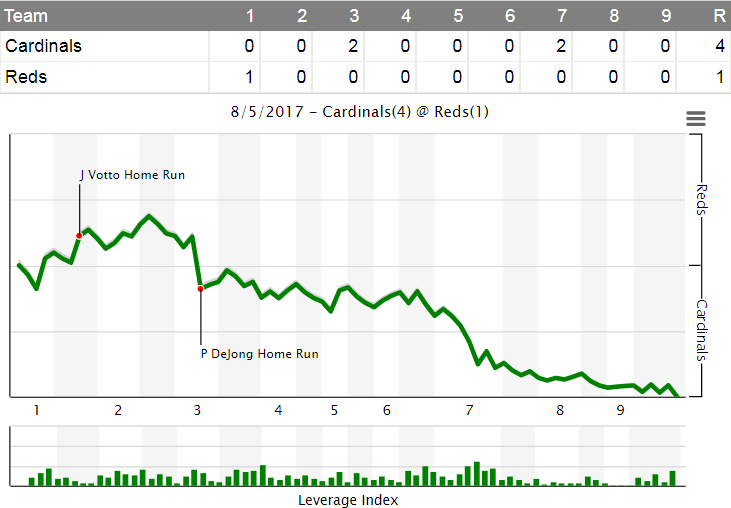 According to FangraphsÃ‚Â WPA statisticÃ‚Â (winning percentage added), the most important play of the game wasÃ‚Â Luis Castillo allowing a 2-run home run to Paul DeJong with 1 out in the 3rd inning, giving the Cardinals a 2-1 lead.Ã‚Â That play decreased the Reds chances of winning by 21.9% (from 60.9% to 41.0%).

Eugenio SuarezÃ‚Â made a huge defensive play in the 1st inning, and it was one you rarely see. Castillo allowed two baserunners to start the game. Suarez had a ground ball hit to him, and alertly tagged third base, and then threw to second for a double play. Suarez also walked for the 54th time in 2017. Just a year ago, Suarez walked a total of 51 times for the entire season. I had started to write so much about Suarez in this space that I had to create an entire article. Look for that tomorrow morning.

Luis CastilloÃ‚Â certainly did not have his best command tonight. He walked 5 batters, and hit 2 more batters. Ã‚Â Nonetheless, Castillo battled and finished with this line: 6.1 IP, 3 H, 3 ER, 5 BB, 4 K. The final earned run Castillo allowed came after he left with some dude named Kevin Shackleford on the mound. I was certainly encouraged to see a young pitcher battle through 6.1 quality innings without his best command.

Adam DuvallÃ‚Â just missed two home runs. One hit the top of the wall (382 ft – the longest distance of any ball hit tonight), and resulted in triple. The other one was a 336 ft flyout.

Blake WoodÃ‚Â pitched two scoreless innings, allowing just 1 walk and striking out 4. Wood now has aÃ‚Â 3.78 ERA/3.15 FIP on the season. The Reds still have Wood for one more year of control after this year. He has quietly had a pretty nice career with the Reds.

Jose PerazaÃ‚Â had a hit tonight, but his best AB was in the 9th inning. Peraza ended up being out by a foot on a groundout, but it was probably his best PA of the season.

Billy HamiltonÃ‚Â andÃ‚Â Jesse WinkerÃ‚Â combined to go 0 for 8 at the top of the Reds order.

Devin MesoracoÃ‚Â didn’t look right tonight. He did squeak in a weak hit in the 9th, but was 0 for 3 with 2 strikeouts before that. You certainly would hate to see him have to go back on the DL.

I have both Lance Lynn and Luis Castillo on my fantasy roster. I am playing the top dog in the league this week. They each had a quality start, Lynn picked up a win, and neither killed my ERA for the week. I am currently up 15-1 now, so that is nice!