The Cincinnati Reds are now 2-12 to start the second half of the season.

Robert Stephenson showed that his first start back from Louisville a week ago where he showed control was a facade. Stephenson walked seven batters in just 4.1 innings.

Chris O’Grady, pitching against the Reds for the second time in less than week, pitched seven shutout innings for the fish. 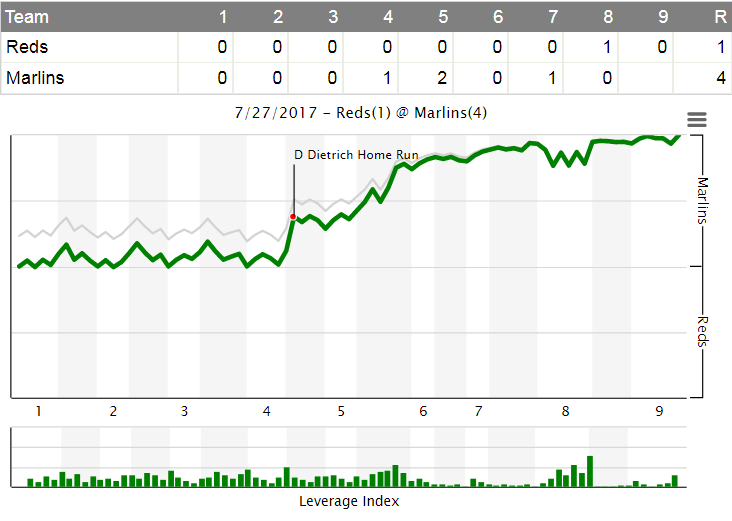 According to FangraphsÃ‚Â WPA statisticÃ‚Â (winning percentage added), the most important play of the game wasÃ‚Â Robert Stephenson allowing a solo home run toÃ‚Â Derek Dietrich with 0 outs in the 4th inning, giving the Marlins a 1-0 lead.Ã‚Â That play decreased the Reds chances of winning by 13.0% (from 44.1% to 31.0%).

Scooter GennettÃ‚Â had an RBI single. He also hit a 361 foot ball to right-field that just missed being a 3-run homer.

Blake WoodÃ‚Â did allow a run in two innings of relief, but he struck out 5 batters without walking any.

The improved control fromÃ‚Â Robert StephensonÃ‚Â in his last start was short lived. Stephenson walked 7 batters tonight. That is not easy to do, as the Marlins rank 27th in the MLB in BB%. Stephenson’s final line was luckily not that terrible (4.2 IP, 4 H, 3 ER, 2 K), but walking 7 batters is just inexcusable.

I started this question on Twitter tonight, and it got mostly negatives feedback:

Thought: Maybe Cozart’s injury hurting his trade value will also lower his free-agent dollar value this off-season? I personally think the Reds should try to sign him if that is the fact. I think Cozart for say 3 years, $40 million would be a good deal for the Reds. My reasoning for that is that I don’t think the Reds have anyone who would be better than Cozart at SS over the next three years. I think the Reds have to start trying to win, or they need to trade Votto. Our hero only has so many good years left.

Jose Siri extends his hitting streak with a line drive single in the 4th inning for the Dayton Dragons. #Reds pic.twitter.com/UXJmR6aBfO