The Reds turned their first triple play in over 21 years, but the Reds fell 4-2 in Yankee Stadium. The Reds offense was dominated by Yankees starter Jordan Montgomery, and didn’t get a hit until the 6th inning.

The Reds made a run late. Billy Hamilton hit an RBI-double in the top of the 8th to cut the lead to 3-2. Zack Cozart was at first base at the time, and his quad injury likely prevented him for scoring the tying run. Eugenio Suarez struck out with runners on second and third to end the inning.

The Reds are now 2-10 to start the second half. 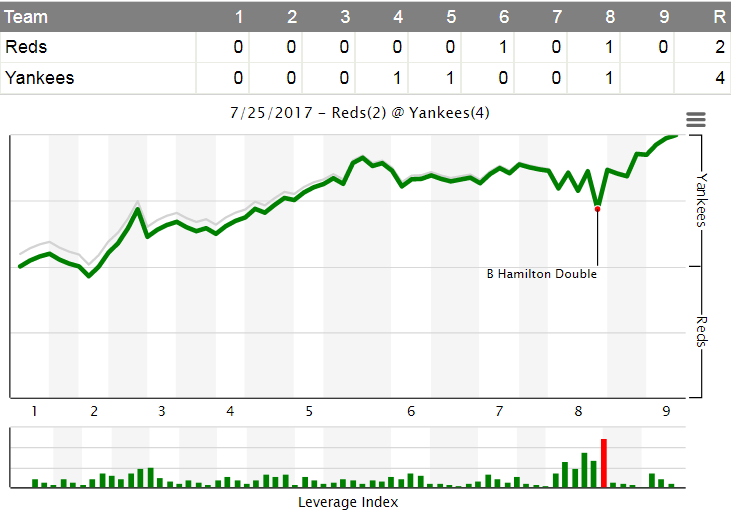 According to FangraphsÃ‚Â WPA statisticÃ‚Â (winning percentage added), the most important play of the game was Eugenio Suarez striking out to end the inning in the top of the 8th, stranding runners on 2nd & 3rd. Yankees lead 3-2.Ã‚Â That play decreased the Reds chances of winning by 14.9% (from 28.2% to 13.3%).

Todd FrazierÃ‚Â stepped to the plate with the bases loaded in his first ever plate appearance against the Reds (which also happened to be his first ever PA as a Yankee at Yankee Stadium). Frazier proceeded to ground into a triple play. It was the first triple play for the Reds since September 12th, 1995 (Jeff Branson to Bret Boone to Hal Morris).

Luis CastilloÃ‚Â pitched OK tonight. He only allowed 1 extra base hit, but gave up 3 ER in 5.0 innings. Several of the hits Castillo allowed were weak singles tonight. Castillo only struck out 2 batters tonight. His previous low in strikeouts for a game was 5.

Billy HamiltonÃ‚Â had an RBI double in the 8th inning.

Eugenio SuarezÃ‚Â made a brilliant play at 3B in the 5th inning. Suarez had a weak grounder hit to him with runners on the corners, and 1 out. Suarez’ only choice was to bare hand the ball, and he did. Suarez threw a perfect strike home while on the run for a big out.

Jose PerazaÃ‚Â walked tonight! It was Peraza’s first unintentional walk since May 21st. Congrats to Jose on this monumental accomplishment!

The Reds didn’t get a hit until the 6th inning, and only had 3 hits for the entire night.Ã‚Â Joey VottoÃ‚Â went 0 for 4, and is now just 5 for 39 since the all-star break. Votto still has 10 walks since the break, so he is still getting on base more than half of the team.

Zack CozartÃ‚Â pitch hit in the 8th inning. He reached on a fielder’s choice. Billy Hamilton later hit a double that if anyone other than Cozart was running, would have tied the game. Cozart looked so bad rounding the bases that Cozart had to be pinch-run for by Robert Stephenson, and the Reds had to lose the DH because they were out of position players who could play SS.

Zack Cozart:Ã‚Â It is going to be pretty difficult for the Reds to find any team to give substantial value for a guy who can barely run the bases right now.

Dellin Betances walked two batters and gave up a run. He entered tonight with a 2.62 ERA, and exited the game to boos. Why anyone would want to play in NYC is beyond me.