When arguing about the greatest Red of all-time, these are the names that enter the conversation:

That is the complete list and, truthfully, Larkin doesn’t belong there. He is here mostly for illustrative purposes. Any further arguments boil down to discussions of time with the Reds, durability, and position.

I spend a lot of time tweeting Joey Votto stats because it’s a nice thing to do while I drink my coffee, that leads to looking at franchise numbers in a fairly deep way. Earlier this season, I got to looking at which Red had the best 10-year stretches in terms of WAR (FanGraphs version). Here’s what you get:

*In only eight seasons. Yes eight. Holy crap and all that.

So, first, you’ll probably notice that Joe Morgan was awesome. And then you’ll notice a decent gap between the top 4 and Votto/Larkin. However, We could give Votto an asterisk too, because he is only now halfway through his 10th season AND his two weakest healthy seasons were his first two seasons (this is not normal). If Votto continues his current pace, he’ll finish the 2017 season with 53.8 WAR over his ten-year stretch. If he has another 7.0 WAR season next year, he bumps off his 3.6 WAR rookie year and has a total of 57.2, putting him past Pete Rose and “tied” with Joe Morgan’s 8-year Reds career.

Now, I want to take a minute and talk about aging trends and the mistakes we sometimes make when talking about them. Let’s start with this graph of the six above-mentioned players (note that this includes their full careers, not just time with the Reds). 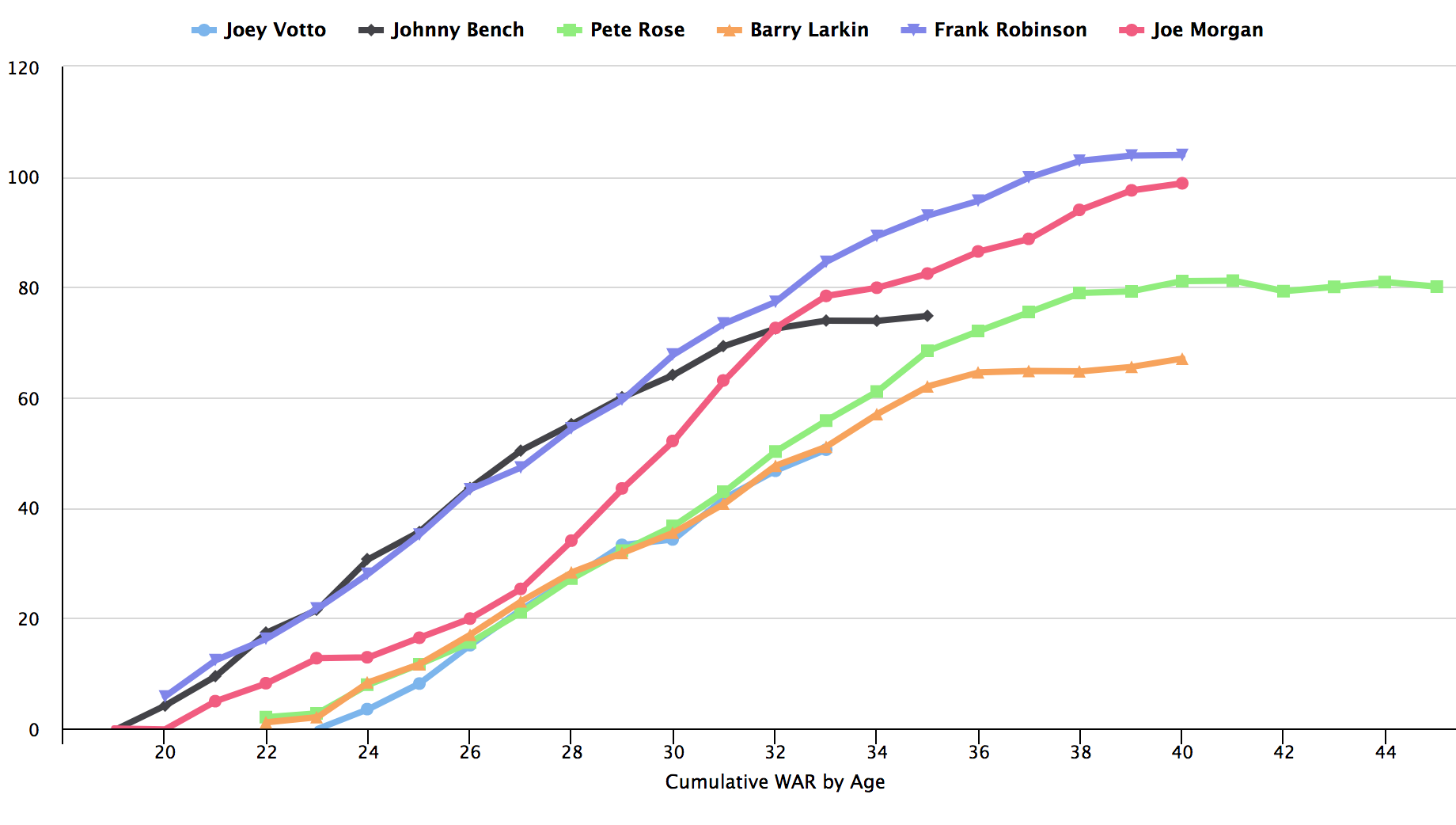 There’s a lot of information in this chart. First, you’ll note that Robinson and Bench tracked well above everyone else until Bench fell off in his thirties. Votto, Rose, and Larkin all have very similar tracks. And there’s Joe Morgan who was the true oddball, which a career on the lower track until he entered his late-twenties and proceeded to blow everyone away for about five years.

But what I really want you to see is that not all players age the same way. Some are late bloomers, some stay productive until a later age. It simply isn’t all a peak-at-28-and-then-decline curve. Different players – SHOCKER – are different.

Which brings me to Joey Votto. If you look closely, you’ll see that he was about to slip past Rose and Larkin right when his knee injury hit and he lost more-or-less a full season recovering. As we’ve seen, he’s now slipped back past Larkin and has Pete in his sights. Things that have happened because Votto is continuing to develop as a player and – especially – as a hitter. Much has been made of his decision to stop striking out, but we should make more of it because it is REALLY IMPORTANT (<—Notice how I used the caps to indicate that it’s important in a big and important way). The more adaptable a player is, the more likely he is to have a friendly aging curve. If you look at the graph again, you’ll see the impact different levels of durability have on career WAR totals.

So now, let’s play a game. Let’s assume that Votto is currently a 7.0 WAR player in a true-talent sense. And let’s assume that he begins his decline phase next year. His WAR totals, in that event, might look something like this:

If he does that, he will finish with more than 80 WAR (this particular theoretical experiment puts him at 82.8), and would have accumulated more WAR as a Red than any other player ever has. He would almost certainly finish his career as the all-time franchise leader in home runs (Bench – 389), walks (Rose – 1210), and RBI (Bench – 1376) while maintaining his current status as the franchise leader in OBP (.425) and OPS (.967). Heck, maybe he’d even take the SLG lead from Robinson (.554). He’d also likely finish second in doubles (Larkin – 441) and third in runs (Larkin – 1329). He would be unquestionably the best offensive player in franchise history and would have a strong argument as the best player ever.

For the worst case scenario, look no farther than the player Votto just squeaked by – Barry Larkin. At age 35, Larkin accumulated 5.1 WAR in 1999. For the last five seasons of his career, he accumulated a total of 5.0 WAR. In this scenario, Votto ends up a notch below Bench, Robinson, Morgan, and Rose. He still gets the all-time lead in walks, but that’s probably all. He’s still – perhaps – the best hitter ever to play for the Reds, but he isn’t in the conversation for the best player ever.

Did I mention that this is the worst case scenario?

This, I suppose, is the point I’m trying to make. Even if he were to spontaneously combust tomorrow, Votto is one of the half-dozen best players in franchise history. With another year and a half at normal Votto levels and he has a stronger than average HOF case. Three or four more productive years and he’s possibly the best player to ever play for the Reds.

Joey Votto has six and a half years left on his contract. Here are his current Reds rankings in a variety of categories:

And those are just his rankings with the Reds. He is currently 10th in OBP… IN MLB HISTORY. He is second among players with careers starting after WWII. Let me type that again: No player except Barry Bonds whose career started in the last 70 years has a higher OBP than Joey Votto. By wRC+ (basically just an offensive catchall that adjusts for era and park), Joey Votto is the 13th best hitter ever. He’s behind only Trout and Bonds since WWII. Votto is the best hitter we’re likely to ever see for the Reds and however much we appreciate him, it’s not enough.