The Reds jumped all over Taijuan Walker and the Diamondbacks right away. Billy Hamilton lead off the game by drawing a very impressive walk. Cozart tripled, and then Votto homered, and it was quickly 3-0.

That would be more than enough on this night for Luis Castillo. He dominated the Diamondbacks, and held them scoreless for 6.2 innings on his way to his first big league win. Every one of the Reds infielders went out of their way to let Castillo know that his effort tonight was appreciated when Bryan Price took him out of the game.

Scooter Gennett and Tucker Barnhart would also homer for the Reds later in the game. Wandy Peralta and Ariel Herandez shut the door in relief, and helped secure a 7-0 win for the Reds. 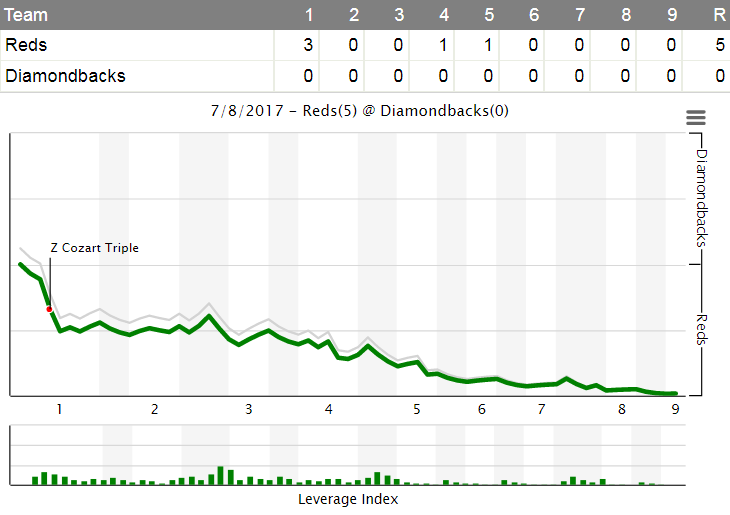 According to FangraphsÃ‚Â WPA statisticÃ‚Â (winning percentage added), the most important play of the game wasÃ‚Â Zack Cozart’s RBI triple with 0 outs in the 1st inning, giving the Reds a 1-0 lead.Ã‚Â That play increased the Reds chances of winning by 11.4% (from 55.7% to 67.1%). 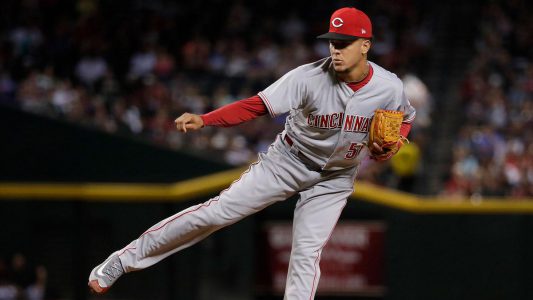 Joey VottoÃ‚Â hit his NL best 26th home run of the season tonight. Votto is now on pace for 48 bombs this season.

Scooter GennettÃ‚Â hit his 15th home run of the season. That is a new career high for Scooter. What an incredible pickup for the Reds. Pretty amazing the Brewers are cruising in first place and they literally just gave up this guy.

Billy HamiltonÃ‚Â had a big night. He reached base four times (2 walks!), and stole three bases. Hamilton now has a .382 OBP over his last 14 games, and his OBP for the year has finally climbed over .300.

Absolutely nothing to see here tonight.

–Big game for the Reds tomorrow. If they are able to win, they would go into the break 3-0-1 in their final four series before the all-star break.

–John Kerkoff had a good observation, and asked me on Twitter tonightÃ‚Â does Votto lead off innings an abnormal amount? I decided to do a quick comparison. Entering tonight, Votto had lead off an inning 67 times this season. Paul Goldschmidt has only lead of an inning 47 times.

–The FS1 annoucers were…..well……interesting. The color guy said something about how giving #4 to Gennett was disrespectful to Phillips, and that doesn’t happen often. Um, ok. The color guy did redeem himself later by advocating for a robot strike zone.

Here is a list of some notable Reds who had someone else wear their number the year after they left Cincinnati. pic.twitter.com/VYsd5bAmSJ