It was one of those nights in Colorado. Scott Feldman made just two bad pitches on the night, but the Rockies made him pay. Feldman gave up a pair of two-run home runs, and they came off the bat of a backup shortstop, and the opposing pitcher. The home run Feldman gave up to Rockies starter Jon Gray was reportedly the largest in the statcast era.

The Reds tried to climb back into the game. They got within a run, but squandered a couple good chances to get over the hump. The Reds also got screwed on a pretty terrible call (see more below). The Reds will go for a series split late tomorrow afternoon. 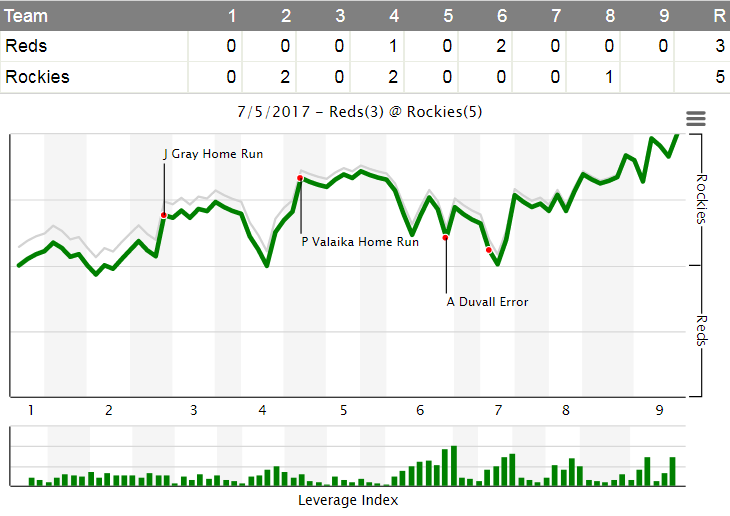 According to FangraphsÃ‚Â WPA statisticÃ‚Â (winning percentage added), the most important play of the game wasÃ‚Â Eugenio Suarez grounding into an inning ending double play in the 7th inning (Reds had runners on 1st & 2nd, trailing 4-3).Ã‚Â That play decreased the Reds chances of winning by 17.0% (from 40.2% to 23.3%).

Scott Feldman‘s run of three consecutive quality starts ended tonight. It’s hard to fault him for giving up a home run to the opposing pitcher, as you often just want to throw strikes with your opposite number at the plate. If you take that away, he would have had a really nice start. Feldman allowed just 1 walk, while striking out 6 tonight.

Ariel Hernandez, who was just called up today for Devin Mesoraco,Ã‚Â was great in relief again. He didn’t allow a hit in 1.2 innings, and struck out 3 (did allow 1 walk). I really don’t know how the Reds can send Hernandez back down at this point. This guy is proving to be able to get MLB hitters out, and has some incredible stuff. Keep him up until he proves otherwise.

Joey VottoÃ‚Â reached base four times, including his first triple of 2017!

Every starting position player had a hit except for Scott Schebler tonight.

Jose PerazaÃ‚Â got picked off in the 8th inning representing the tying run. Replay clearly showed that Peraza was safe, but somehow the call was upheld. Nonetheless, it was a dumb play by Peraza.

Scott Schebler went 0 for 4 with 3 strikeouts, but he did have 3 hits yesterday.

Tony CingraniÃ‚Â gave up a big insurance run to the Rockies in the bottom of the 8th.

Rockies play by play announcer to start the 8th inning: “the Rockies pitchers should think to themselves, if you are are perfect over the next two innings, you don’t have to face Votto.”

Nolan ArenadoÃ‚Â had an error tonight!