[This report was submitted by loyal Nation member Jimmy Adams, aka VaRedFan. Thanks, Jimmy!] 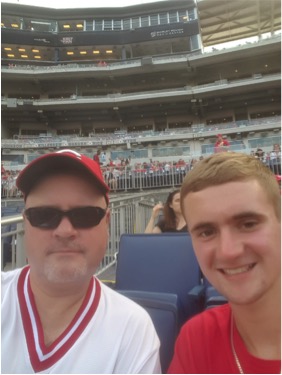 Friday June 23, my son Justin, who is home after his 1st year of college at VMI (Virginia Military Institute), and I took the 3 hour drive north to Washington from Southeastern Virginia, to catch a couple of games against the Nationals. We were excited, despite the low expectations. Our hotel was a short 5 minute walk to the park. Gates open 2 hours before game time, and the lines to get in were already deep. TonightÃ¢â‚¬â„¢s giveaway were Game of Thrones T-Shirts. Pretty good swag!

NationalÃ¢â‚¬â„¢s Park is a fine place to see a game, in my opinion. There is a Metro station that pulls right up to the park so you donÃ¢â‚¬â„¢t have to fight the brutal DC traffic, if you choose. Over the years, since our first visit in 2008, the surrounding area continues to be developed. More and more restaurants and hotels appear to be popping up.

We watched the Reds take batting practice for about an hour up until 6:00. Afterward we headed to our seats. I splurged a little for these tickets, as we were sitting behind home plate slightly towards the thirdÃ‚Â base line next to the Reds dugout. It was in the firstÃ‚Â row of the section, fifth row from the field. Here was our view: 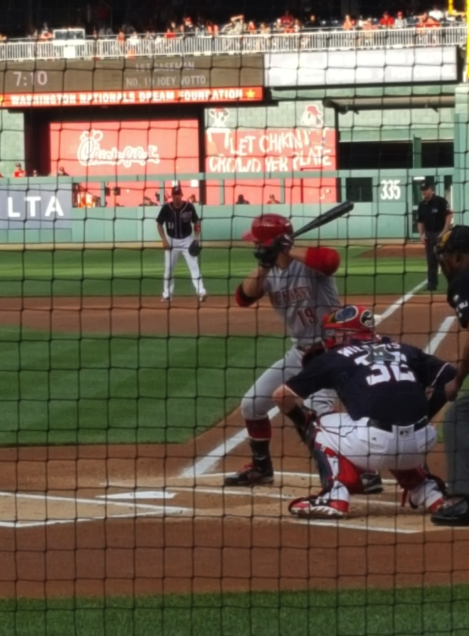 These seats were part of the PNC Diamond Area, which gave us access to a full buffet through 5 innings as well as free food and drink all game from a large menu. After doing some major damage to the buffet, I only had fully loaded nachos during the game along with several rounds of draft beer. 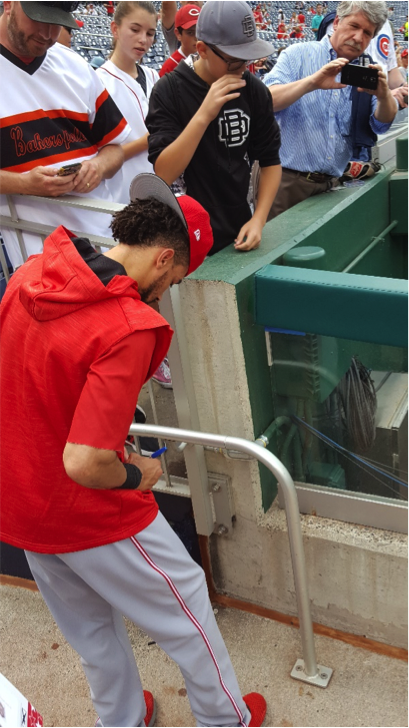 As the pregame activities were winding down, a few Reds came down the side of the dugout and signed autographs. Billy actually peeled inside the gate to sign and take a few pictures.

We werenÃ¢â‚¬â„¢t able to get Billy (too fast??), but Mike Lorenzen however did oblige!

Bronson Arroyo and Homer Bailey were chatting and signing before the game. I like to think they are keeping Bronson around just as a mentor for the rest of the season.

I wonÃ¢â‚¬â„¢t go into too much of a game recap, as we all know what happened. How much fun was it to score 4 runs in the first inning huh? Scooter got the party started. 1-0 Reds.

It was Luis CastilloÃ¢â‚¬â„¢s debut, and I will echo what many of the RLN writers have observed. This guy has a sweet and easy motion, and the ball explodes out of his hand. 99 mph gas with seemingly no effort at all, to go along with swing and miss breaking stuff. There were a few hiccups with some walks. (From my view, he looked to be getting squeezed, but I couldnÃ¢â‚¬â„¢t tell for sure if they were inside/outside). Nevertheless, I was impressed.

Ultimately, everybody in the bullpen let us down except Tony Cingrani. I couldnÃ¢â‚¬â„¢t believe Price brought Blake Wood in again. No Ariel Hernandez?? Harper sent the house into a frenzy with his walk off single off of Iggy. Speaking of the House, the atmosphere was definitely electric. It appeared to be about 90% full. Joey Votto would rest his bat against the wall while on deck, and interact with the fans a little. Some inebriated Nats fans were really giving him the business in the 8th inning. Joey just looked up at them, smiled, and said wassup. I was hoping he would go yard just so to see if he would salute them afterwards.

Here were our seats for SaturdayÃ¢â‚¬â„¢s game. FirstÃ‚Â row, secondÃ‚Â deck. The $9.50 beer somehow didnÃ¢â‚¬â„¢t taste as good as the freebies from the day before, so I stopped after one. By time the game started our section was in the much needed shade, and there was a small breeze that also provided some relief from the 90 degree heat.

This picture kind of tells the story of how the day went for the Reds.

We were hoping that Bailey would provide the Reds starting staff a boost. But it was not to be, as the Nats hit early and often, and it didnÃ¢â‚¬â„¢t stop after Homer left. Homer did have good velocity, so maybe there is a silver lining in there somewhere. Lisalverto Bonilla and Wood did what they do, give up runs. Even Hernandez got touched up. CouldnÃ¢â‚¬â„¢t believe Taylor hit a 98 mph fast on the firstÃ‚Â pitch heÃ¢â‚¬â„¢s ever seen from Hernandez.

We finally saw Billy get a few hits late. IÃ¢â‚¬â„¢m a big Billy fan, but he is struggling mightily 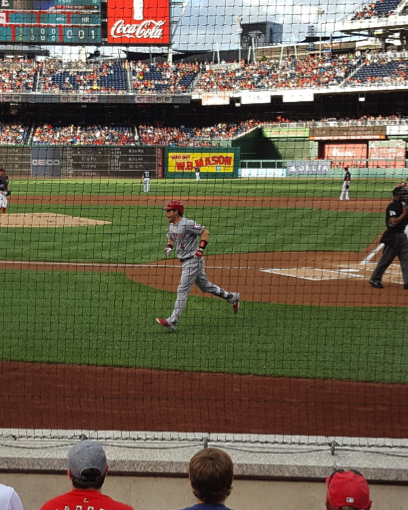 right now. He has no drive in his swing, and is just flicking at the ball weakly off his front foot. He needs to be DLÃ¢â‚¬â„¢d if heÃ¢â‚¬â„¢s dinged up, and moved down to the ninthÃ‚Â spot in the order. Time is running out for him to prove he belongs.

I believe the Reds pitchers had a 1-2-3 inning only once in the 2 games. Ouch! It seemed like Ross was ahead in the count all day. 0-1, 1-2. Votto jumped on the first pitch twice for hard hit outs, but everybody else seemed in take mode on the first pitch against Ross who had a 6 ERA coming into the game. Scooter seemed to square up everything he saw. Even his outs were loud. Another full stadium (an announced sellout of 40,000+) got to witness the offensive barrage by the home team. Generally, we tend to see a large number of Reds gear, however, this trip the RedÃ¢â‚¬â„¢s fans were few and far between.

Though we didnÃ¢â‚¬â„¢t garner any Reds wins, itÃ¢â‚¬â„¢s always great to be at the Ole Ball Yard with your kid.