You often see a hitter’s performance presented as their “slash line.” The first number is the batting average (AVG), the second number is on-base percentage (OBP) and the third number is slugging percentage (SLG). Slash line stats depict three distinct skills of the batter: hitting, on-base and power.

Slash line data as presented is a vast improvement compared to simply using a hitter’s batting average for evaluation. You get much more information about the hitter’s production and value. But the way slash line data is presented makes it needlessly complicated to figure out the on-base and power tools. It’s an easy problem to fix.

A player’s on-base percentage shows how often he gets on base, either by hit, walk or being hit by a pitch. OBP includes the player’s batting average. So if the purpose is teasing out the players added on-base skills in addition to getting hits, OBP is an inefficient way to show it.

We can isolate and quantify the on-base skill by subtracting a player’s AVG from his OBP. Or, a simple direct formula is:

This identifies the percentage of times the hitter gets on base by walks and being hit by pitches. For the rest of this post, let’s call it the on-base margin (OBM).

So when you look at a hitter’s slash line, subtract the first number from the second and compare it to .060. You’ll know whether the hitter has good or bad “on-base” or “plate discipline” skills, at least based on his walk-rate.

People often assume SLG is a good measure of power. It is to an extent, but can be misleading because it gives hitters credit for reaching first base, like through a single. A simple example makes this point. Which of these players hits for more power?

If you judge by SLG, the last number, Hitter A hits with more power. But if you leave out getting to first base – which you can do by subtracting AVG from the slugging percentage, that leaves you the extra bases earned from doubles, triples and home runs. That number (SLG minus AVG) gives you the batters “isolated power” or ISO. In our example, Hitter A’s isolated power is .125 while Hitter B’s isolated power is .160. Hitter A gets more singles, but hitter B gets more extra-base hits. ISO is a better measure than SLG of the skill of hitting for power.

The slash line provides important information about three of a hitter’s offensive skills. If we modified the conventional slash line by presenting the same information in a slightly different way, the data would be clearer. We should substitute OBM for OPS as the second term, isolating the on-base skill. We should use ISO instead of SLG, better defining the power skill. Here are our two players with the modified slash line:

With the new formulation we can easily see that Hitter A has a much better hit skill, while Hitter B has a better on-base and power skills. Let’s do the fix for the three Reds players above:

Sean Casey had the best hit skill of the three. Adam Dunn was a monster when it came to on-base and power skills. All this information is already present in the conventional slash line format. 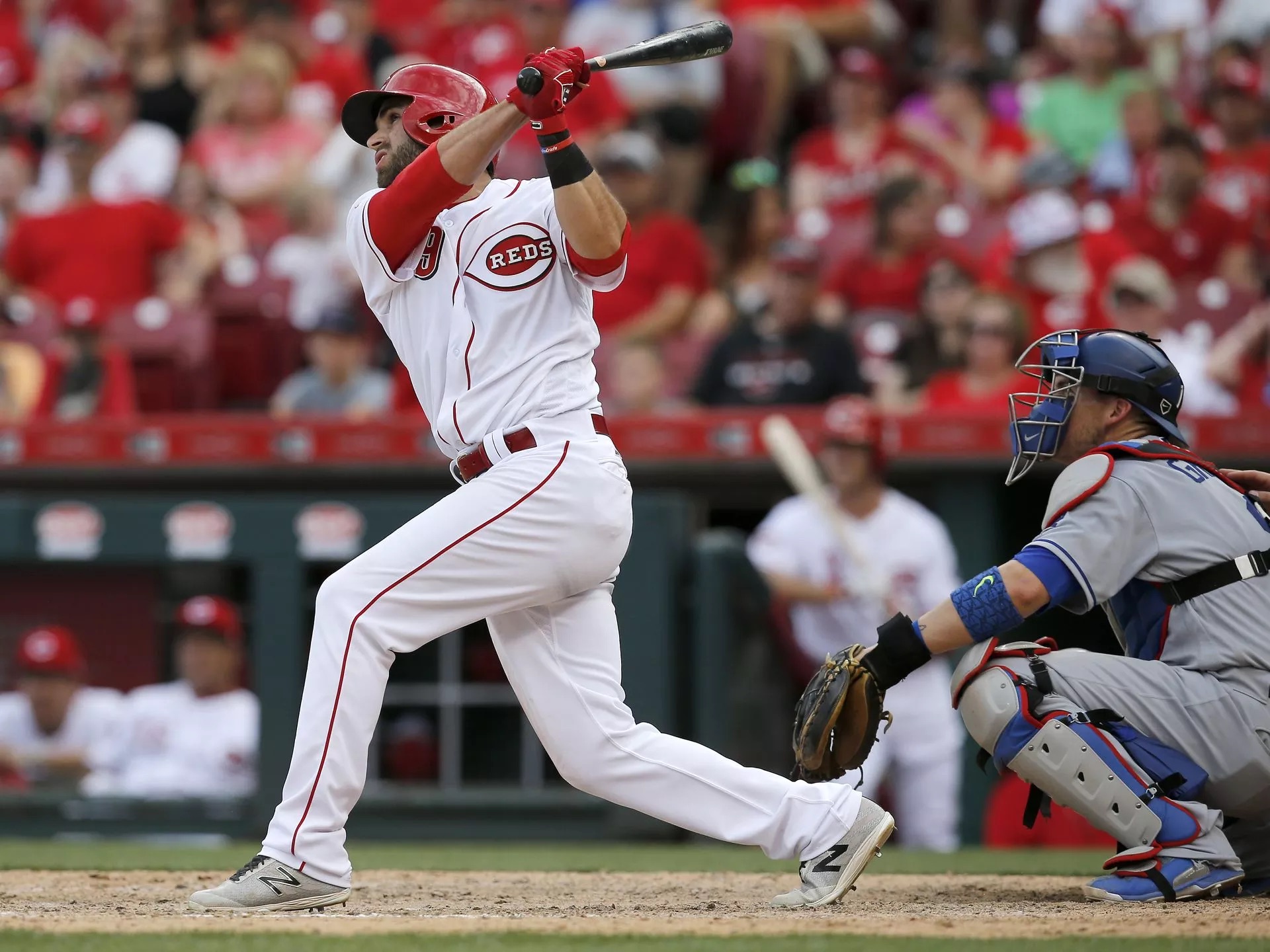 Jose Peraza has about the same number of plate appearances this year with the Reds as he did last year. Here are his batting lines:

At first glance, Peraza has been much worse across the board than last year. But if we use our new-and-improved slash line:

It turns out that Peraza’s on-base skill and power skill are almost identical in 2017 as they were in 2016. Neither year is good. In fact, his on-base number is one of the lowest in the league. In Peraza’s case, he’s actually been hit by pitches more often than he’s walked. Peraza hasn’t walked at all in June.

Peraza’s power (ISO) is down a little bit, but is essentially the same. League average ISO in 2017 is .170. So as with on-base skills Peraza is also extremely poor at hitting for power. But the point right now is that he’s been roughly the same this year. Albeit both bad.

But what about his Batting Average? 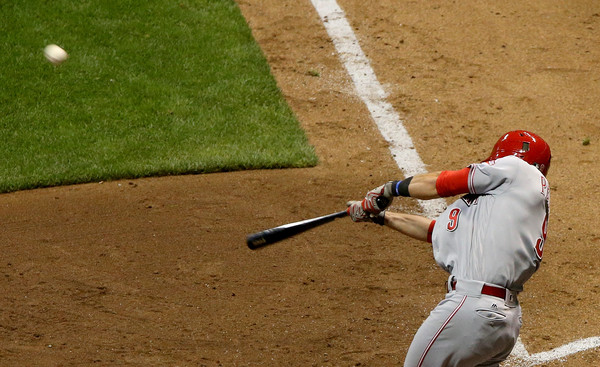 Peraza’s batting average is .070 lower this year. That’s a gigantic difference. Can we figure out what’s behind it?

Thanks to the data collected by StatCast, we have detailed insight. Peraza is hitting the ball with less authority this year. His average exit velocity is down from 84.2 mph to 82.2 mph. The average distance his fly balls travel is down from 163 feet to 157 feet. Peraza’s percent of “barrels” per plate appearance is down from 1.6% to 1.4%. While his percentage of hard-hit balls has remained steady at 21.3%, Peraza’s soft-hit percentage has jumped from 19.4% to 26.8%.

These numbers are all incredibly low. MLB average exit velocity is 87.4 mph, fly ball distance 182 feet and barrels per plate appearance 4.4%. Other Reds (through Monday):

So one reason Peraza’s batting average is down is that he’s making worse contact. Why? He swings at 41% of the pitches out of the strike zone, compared to 38.3% last year. League average is 30.7%. That’s a big factor. Quality of contact suffers for every hitter when he hits a ball not in the strike zone. Plate discipline and batting eye are huge problems for Peraza. It manifests as softly hit balls.

But another difference from 2016 to 2017 is luck. Jose Peraza has been unlucky this year and was bigly lucky last year. Based on his hit portfolio – line drives, fly balls, pop-ups, hard-hit balls and running speed – Peraza’s expected BABIP last year was .325, but it actually was .361. This year, his expected BABIP is .303, but is actually .292 (Chamberlain, 2.0). So if you add the extra 36 points from last year with the 11 points this year, about two-thirds of his fall in batting average is explained by worse luck.

Jose Peraza hit .324 last year and – surprise! – he isn’t a .324 hitter. He’s batting .254 this year and he’s been a little bit better than that. The 70-point drop in batting average from last year to this year is about one-third worse hitting and two-thirds where the ball has landed. But still roughly a 20-point increment of worse hitting.

To finish analyzing Jose Peraza, we need to take a quick detour back to Barry Larkin’s career. 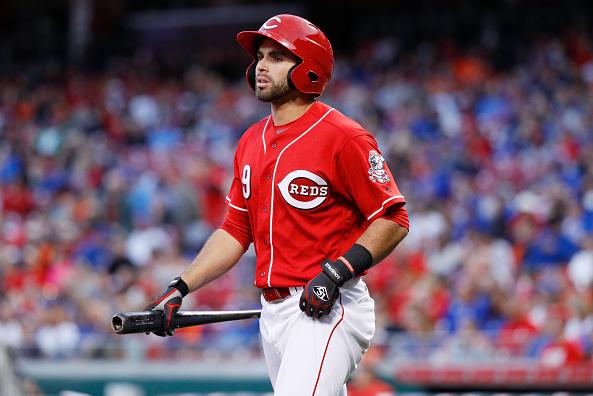 A Short Point About Barry Larkin

At age 23, Larkin had a worse batting average than Peraza does. But even early in his career, the University of Michigan grad was showing much better on-base skills and power than Jose Peraza. Larkin finished his Hall of Fame career .295/.076/.149.

Jose Peraza remains a severely flawed hitter. He has a horrible eye at the plate. This results in too many swings at pitches outside the strike zone and lots of soft, lousy contact. It also means he hardly ever, ever, ever walks. In addition, Peraza has exhibited little power.

On the other hand, Jose Peraza is just 23 years old and hasn’t played a full major league season yet. It’s too early to judge whether Peraza is going to be an average or even good major league hitter.Ã‚Â Chase Utley didn’t make the major leagues until he was 24. Brandon Phillips was playing for a Cleveland minor league affiliate at 23. But there are examples on both sides. Cal Ripken won the MVP at age 22; and Alex Rodriguez had 150 home runs, 130 stolen bases and won a batting title by age 23.

What Peraza needs most right now – desperately – is to work on his approach. Playing every day, which he didn’t do for a chunk of last year, is part of the solution. It’s necessary, but not sufficient. Peraza is playing every day now and his approach is getting worse. That’s a conclusion based on fact, not opinion.

What the front office needs to figure out is where Jose Peraza has a better chance of making aÃ‚Â significant change in his hitting. Does Peraza need to be facing major league competition? Maybe the minor leagues, where focus can be on developing the player, would be better. There’s ample evidence the former hasn’t been working.