Luis Castillo’s 107th pitch of the evening was a 99 MPH fastball that was perfectly placed for a huge strikeout. It is moments like that you cling to during a rebuilding season.

Castillo was certainly not perfect on this evening, and was aided by some spectacular Cincinnati defense. However, Castillo struck out nine batters over 5.2 innings, and limited the Brewers to just two runs. Any talk of Castillo being sent down to the minors anytime soon seems foolish right now.

The Reds offense was lead by early home runs from Adam Duvall and Scooter Gennett. The game was tied in the bottom of the 8th inning. Billy Hamilton lead off the inning with a walk. He stole both second and third base, and ended up scoring on an infield single to give the Reds a 4-3 lead.

Things got a little hairy in the 9th inning. Iglesias gave up two bloop singles, and the Brewers had runners on the corners. Iglesias struck out Aguilar for the second out of the inning, but Arcia took off for second. Tucker Barhart threw a bullet to second base, but the runner from third base took off for the plate. Arcia retreated back towards first base, but Gennett alertly quickly ran him down and tagged him before the tying run touched home. Reds win! The Reds are now 6.5 games back in the NL Central. 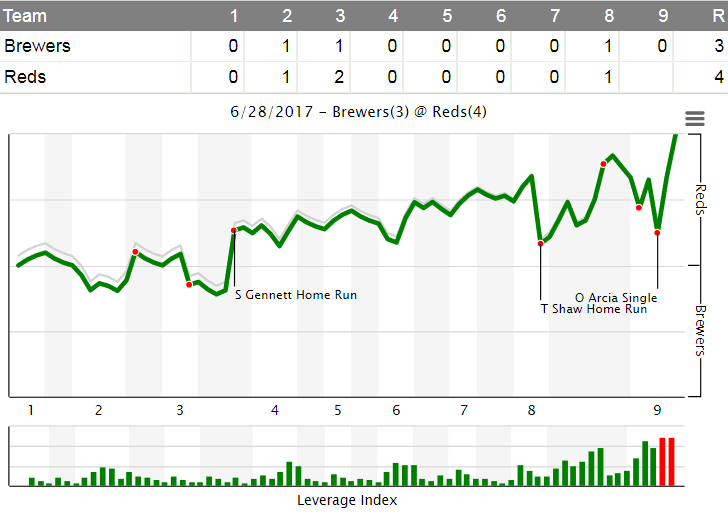 According to FangraphsÃ‚Â WPA statisticÃ‚Â (winning percentage added), the most important play of the game wasÃ‚Â Scooter Gennett’s 2-run home run with 2 outs in the 3rd inning, giving the Reds a 3-2 lead.Ã‚Â That play increased the Reds chances of winning by 22.8% (from 45.5% to 63.3%). 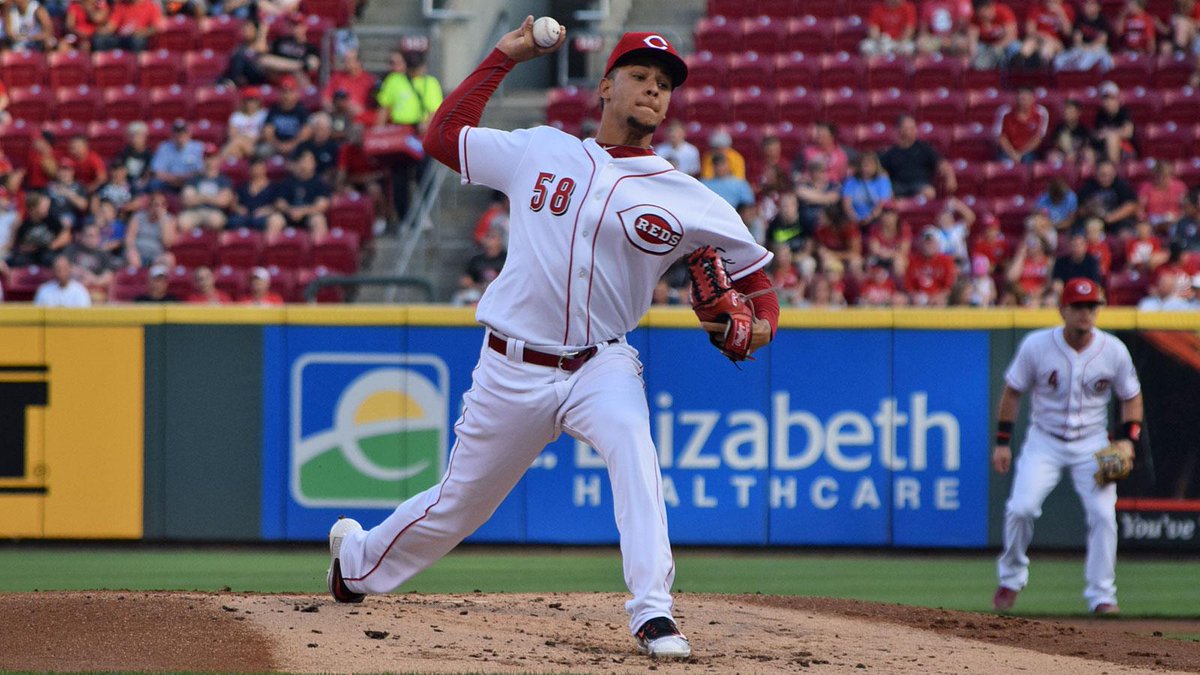 Luis CastilloÃ‚Â turned in a pretty nice night: 5.2 IP, 5 H, 3 BB, 9 K, 1 HR, 3.85 FIP. He is certainly fun to watch, especially that high 90’s fastball. It is pretty amazing that the Reds got Castillo for Dan Straily, and they picked Straily up off waivers last year. That is how a rebuild is supposed to work.

Adam DuvallÃ‚Â hit his 18th home run of the season. Duvall now has 59 career home runs with the Reds in less than 1,000 at-bats.

Billy HamiltonÃ‚Â scored the winning run by walking, stealing second, and stealing third. It is amazing what can happen when Billy walks.

TheÃ‚Â Reds defenseÃ‚Â tonight was spectacular. Schebler robbed a 3-run home run in the first inning that likely would have changed the complexion of this game. Adam Duvall threw out a runner at second base on an absolute laser. Eugenio Suarez also made a nice play.

Tony CingraniÃ‚Â has been going really well of late, but he gave up a tying home run tonight.

Robert StephensonÃ‚Â had a terrific night in Louisville this evening. Stephenson finally turning the corner?

Over his last three starts in Triple-A, Robert Stephenson has 4 total walks to go with 19 strikeouts. #Reds

Joey VottoÃ‚Â dressed up in a donkey suit today to support Cozart’s all-star chances while he was being interviewed on the MLB Network. It is pretty cool that Votto, the greatest hitter in Reds history who has been screwed out of the all-star game in four consecutive years, is championing for his teammate so hard.

Joey Votto. In a donkey costume. On television.

If that doesn't get you to #VoteCozart, then nothing will.

I tweeted that the Cincinnati ballclub has played some pretty spectacular defense. Someone asked me which Cincinnati team that I was talking about. Please go away forever soccer (sorry Chad).

On a positive note, you have to check out this story about an umpire saving a life today in Pittsburgh. It’s an incredible story.