To their credit, the Brewers are in first place in the NL Central. But their Achilles heel of starting pitching was on full, crippling display tonight. Junior Guerra, fronting a glitzy 3.11 ERA was also toting an ugly 6.04 FIP and 5.82 xFIP. We know which of those numbers to believe. The Reds hitters battered Guerra early and often.

The Reds cut Milwaukee’s lead over them in the division to 7.5 games. 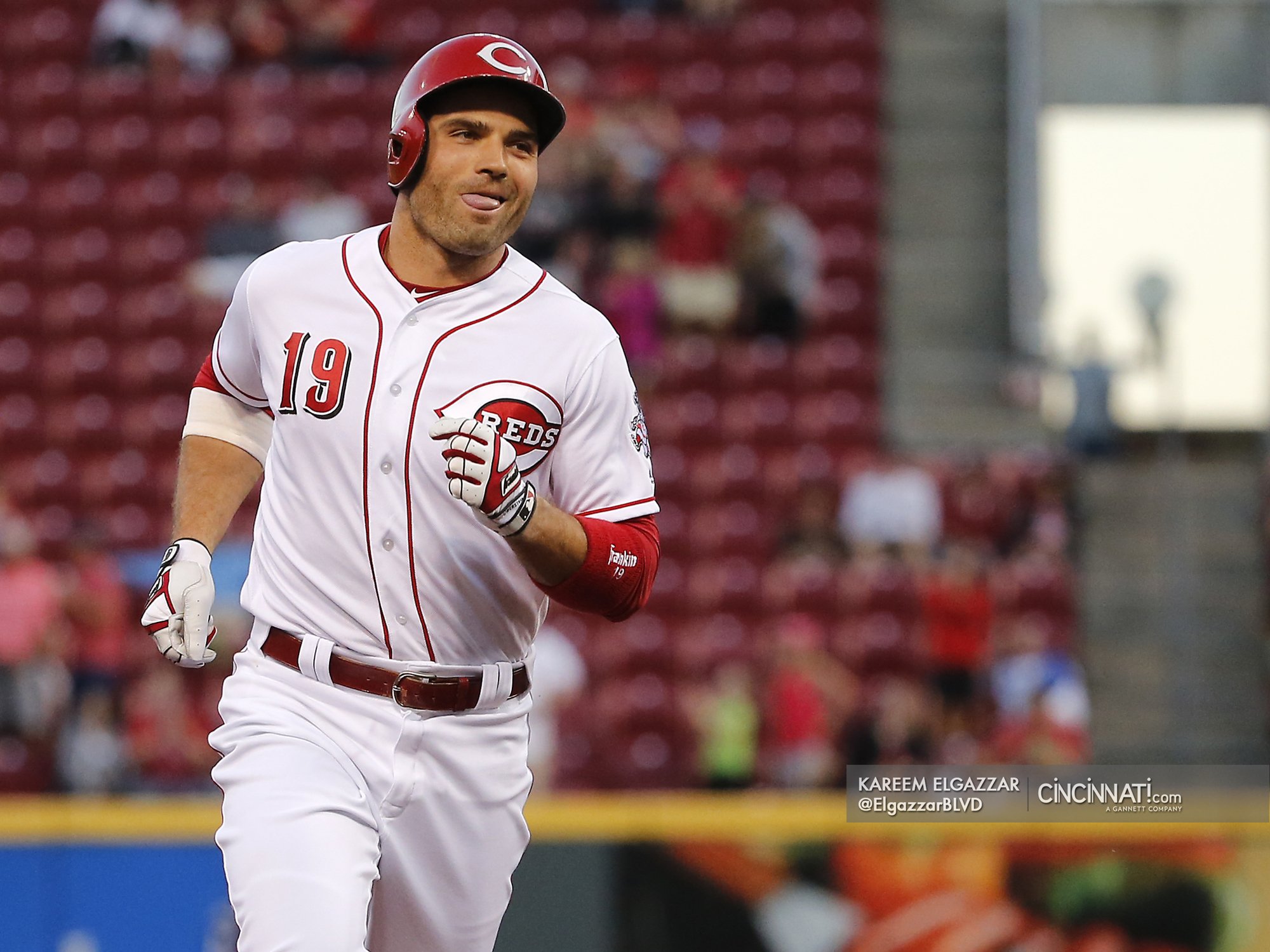 The bullpen had to cover four innings. Drew Storen gave up a run on two hits in the 6th. Tony Cingrani pitched a 1-2-3 7th and got the first out of the 8th. “Cingrani is healthy now and has his confidence going,” said Chris Welsh. Michael LorenzenÃ‚Â – fastball regularly at 98 mph – struck out the first batter he faced then gave up an infield single on a ball Jose Peraza booted in the 3B-SS hole. Lorenzen walked a batter then gave up another infield hit before getting the third out.

Raisel Iglesias got the save in the 9th, pumping fastballs up to 99 mph and throwing bendy off speed pitches.

The Reds jumped on the board quickly. Billy Hamilton, batting left handed, yanked a GABP special to the first row of right-center field. Scooter Gennett drew a walk from his former team and scored on Adam Duvall‘s 17th homer of the season. Eugenio Suarez walked and Scott Schebler was hit by a pitch. Suarez scored on Devin Mesoraco’s single and the Reds led 4-0. Suarez hit a solo shot for the Reds fifth run. It was only Suarez’s second homer the last month.

Joey VottoÃ‚Â joined the fun, crushing a two run homer to right-center, scoring Gennett who had singled. Did I mention the Brewers were Gennett’s former team? Votto’s homer gave the Reds a 7-5 lead. Votto trails only Cody Bellinger of the Dodgers in home runs in the NL. An inning later, Mesoraco made it 8-5 with a sharply hit sacrifice fly.

Somehow the Reds managed to not give up a home run to Eric Thames.

Defensive plays: Devin Mesoraco jumped out from behind home plate to grab a swinging bunt by Jonathan Villar and start a key double play. Mesoraco is a great athlete, aided by a pair of surgically enhanced hips. Scooter Gennett ranged way over by 2B to field a grounder and make an off balanced throw to 1B in the 7th inning. Gennett used to play for the Brewers. Scott Schebler made the games final out on a terrific running catch into the right field corner.

More news on Brandon Finnegan before the game and it isn’t good. He’s injured again the same shoulder muscle although in a different place. Another trip to the disabled list is a virtual certainty and Finnegan may miss several weeks. Mark Sheldon reported: “There was more clarification about the injury. Originally called a strained triceps, Finnegan again has a strain in the left teres major muscle near his shoulder. It’s the same muscle he injured in April.” Finnegan himself called it heartbreaking and a freak accident.

Zack Cozart is eligible to come off the DL tomorrow. He’s suffering with a strained quad muscle. If that sounds familiar, you may be remembering the injury (left distal quad) that hobbled Joey Votto through much of 2014. It’s an injury of overuse and can be aggravated. If Cozart’s health was the top priority, he’d take several more weeks off. But that doesn’t suit his needs or the team’s. Cozart is in a contract year and the Reds would like to shop him at the trade deadline. The situation bears watching.