A two-part narrative is developing around the Reds bullpen. It’s a simple story with a scary ending. First part: The bullpen has been bad lately and getting worse. Second: ThatÃ¢â‚¬â„¢s because the relievers are getting tired from being used too much. The villain in this story is a shady cabal known as the Starting Rotation. Lately, every time the Reds bullpen gives up a run, people point an accusing finger at the bullpen workload. As if that’s the only reason for pitchers to perform worse one month than the weeks before.

Before this claim hardens into conventional wisdom, letÃ¢â‚¬â„¢s take a closer look to see if thereÃ¢â‚¬â„¢s anything to it.

Once upon a time, June was so bad …

Is the Reds bullpen actually getting worse as the season has worn on? LetÃ¢â‚¬â„¢s look at the right data broken down by month.

First caveat Ã¢â‚¬â€œ months are arbitrary endpoints. ThereÃ¢â‚¬â„¢s no principled reason to divide the bullpenÃ¢â‚¬â„¢s performance into three parts (April, May and June) instead of two or four or five other than convenience. Given that reservation, hereÃ¢â‚¬â„¢s the data. The most important columns are xFIP and SIERA: [Data from FanGraphs and from before Monday’s game.]

The Reds bullpen pitched great in April, the only month that Bryan Price practiced anything revolutionary in using his relievers. That’s probably a coincidence, but the performance wasnÃ¢â‚¬â„¢t entirely a product of luck Ã¢â‚¬â€œ where the balls fell Ã¢â‚¬â€œ it had a super-high strikeout rate, a relatively low walk rate, a normal home run rate and a low hard-hit ball rate. Its xFIP and SIERA was a full run lower than league average bullpen performance.

May was a much worse month for the bullpen than April, even worse than June has been so far. That’s based on factors that pitchers control (measured by xFIP and SIERA). Reds relievers had a lower strikeout rate and higher walk rate in May compared to June.

The Ã¢â‚¬Å“June bullpen is so badÃ¢â‚¬Â tale is fiction born from reliance on one statistic – ERA – for that claim. General criticisms of ERA and ERA-based metrics – fielding dependence, random sequencing, inherited runners, park factors, luck on balls in play – are known. But ERA is a particularly lousy way to measure bullpen performance over the few innings a bullpen throws in a month. The underlying measures Ã¢â‚¬â€œ strikeouts, walks, swinging-strikes, pitch velocity, first-pitch strikes and hard-hit balls donÃ¢â‚¬â„¢t support the Ã¢â‚¬Å“June so badÃ¢â‚¬Â narrative. A big factor in the June ERA rise has been a higher BABIP, an outcome mostly out of the pitcherÃ¢â‚¬â„¢s control.

So the frightening “bullpen getting worse lately because they are too tired” narrative doesn’t make it through the first chapter when examined closely. The bullpen is not getting worse. May was rock bottom, at least so far.

In a faraway land the bullpen is so tired …

Next, letÃ¢â‚¬â„¢s look at the notion that the bullpen is tired, which is based on two claims. The first evidence is really just inference based on the (now disproven) claim that the bullpen has pitched worse recently. The second basis is that because the Reds starting rotation has been so poor, the Reds bullpen has pitched more innings than other bullpens. This is true, to a point.

To determine and compare bullpen workloads, we have to decide the best way(s) to measure it. There are two obvious metrics. One is looking at the total number of appearances made by a reliever/bullpen. The second is the total number of innings the reliever/bullpen has pitched. Because most relief appearances are about an inning long, these numbers tend to move in lockstep, but not always. 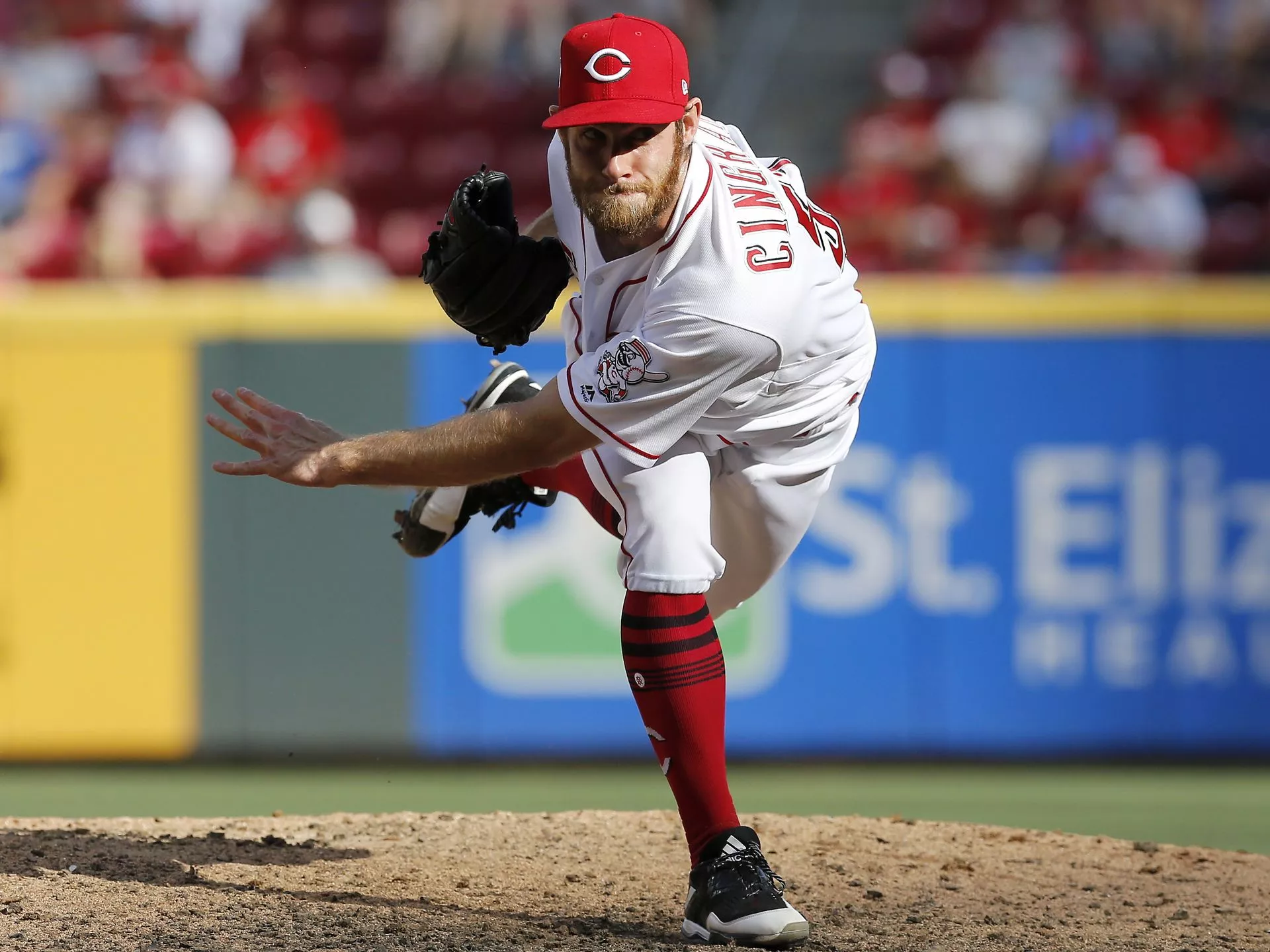 The Bullpen Is So Tired narrative is based entirely on the number of innings pitched. The Reds bullpen has pitched 301 innings, the most in the NL by 21 innings over the Orioles. The median number of bullpen innings pitched is 260 and the lowest is 211.1 by the Nationals.

The number of reliever appearances tells a different story. The Reds rank twelfth out of fifteen in the NL. Bryan Price has used his bullpen 232 times. The New York Mets lead the NL with 264 appearances, while Dusty Baker’s Nats again are last with 217. The median is 241. The Reds are closer to the bottom than the top of this measurement.

The reason the Reds are first in one measure of workload and nearly last in the second is obvious. Bryan Price has had to use relievers for multiple innings (variations of long relief) many times compared to other teams. On the one hand, that Reds relievers have fewer appearances mitigates the heavy workload because warming up is a big part of the stress on pitchers. Reds relievers have warmed up at a lower rate than average.

But thereÃ¢â‚¬â„¢s no getting around the total number of innings the bullpen has pitched. ThatÃ¢â‚¬â„¢s also real workload. So letÃ¢â‚¬â„¢s keep digging on that part of it.

Using yearlong totals for bullpen innings pitched is an unreliable way to measure how much the current relievers have pitched. ThatÃ¢â‚¬â„¢s especially true for a team like the Reds that cycles its long relievers to and from its AAA affiliate. Pitchers who are no longer in the Reds bullpen have thrown 76.1 of the 301 innings. That list includes Robert Stephenson (24.2 IP), Cody Reed (12 IP), Barrett Astin (8 IP), Lisalverto Bonilla (11.1) and Jake Buchanan (14.1) among others.

It doesnÃ¢â‚¬â„¢t make sense to look at the total number of innings (or appearances) by the bullpen to determine if a specific reliever, such as Wandy Peralta or Michael Lorenzen are tired or overworked. The five who have been there all year are Wandy Peralta (34 IP), Drew Storen (31 IP), Michael Lorenzen (40.1 IP), Blake Wood (35.2 IP) and Raisel Iglesias (36.1 IP). The other two members of the current pen are Austin Brice (26.1 IP) and Tony Cingrani (12.1 IP).

Long, long ago they pitched too many innings …Ã‚Â

LetÃ¢â‚¬â„¢s look at the five relievers who have pitched for the Reds all year. These charts use numbers from before Monday’s game. 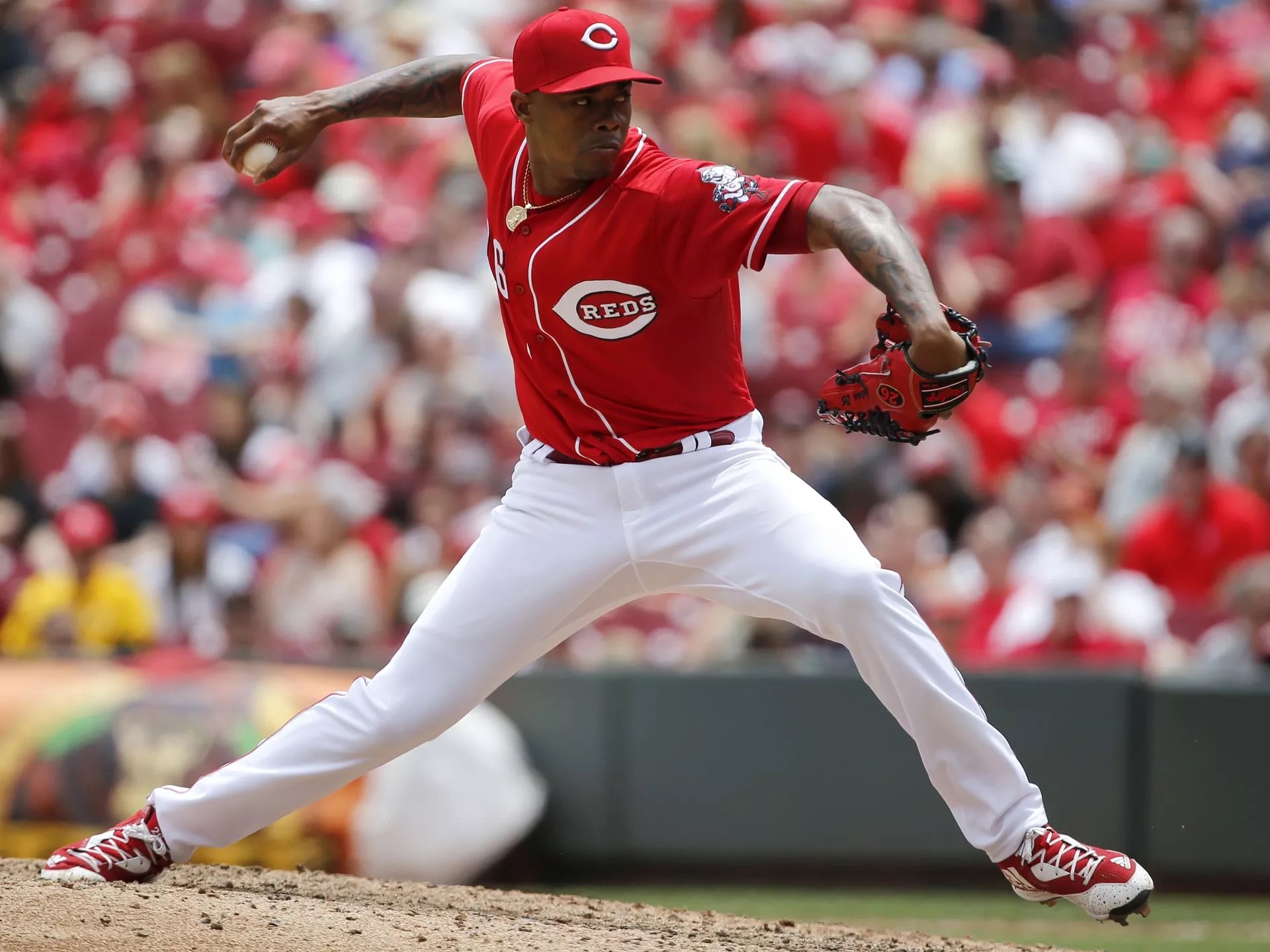 Raisel Iglesias is on course to pitch 79 innings. His strikeout and walk rates have been pretty consistent, which is reflected by his month-to-month xFIP being highly stable. His numbers across the board are better in May than April, other than ERA. The ERA spike is due to one game where he gave up more earned runs (4) than he has the rest of the season. See: ERA is a lousy stat for relievers, especially over short time frames. He is on pace for 67 appearances, right at league average. Iglesias’ numbers show no sign of his tiring. 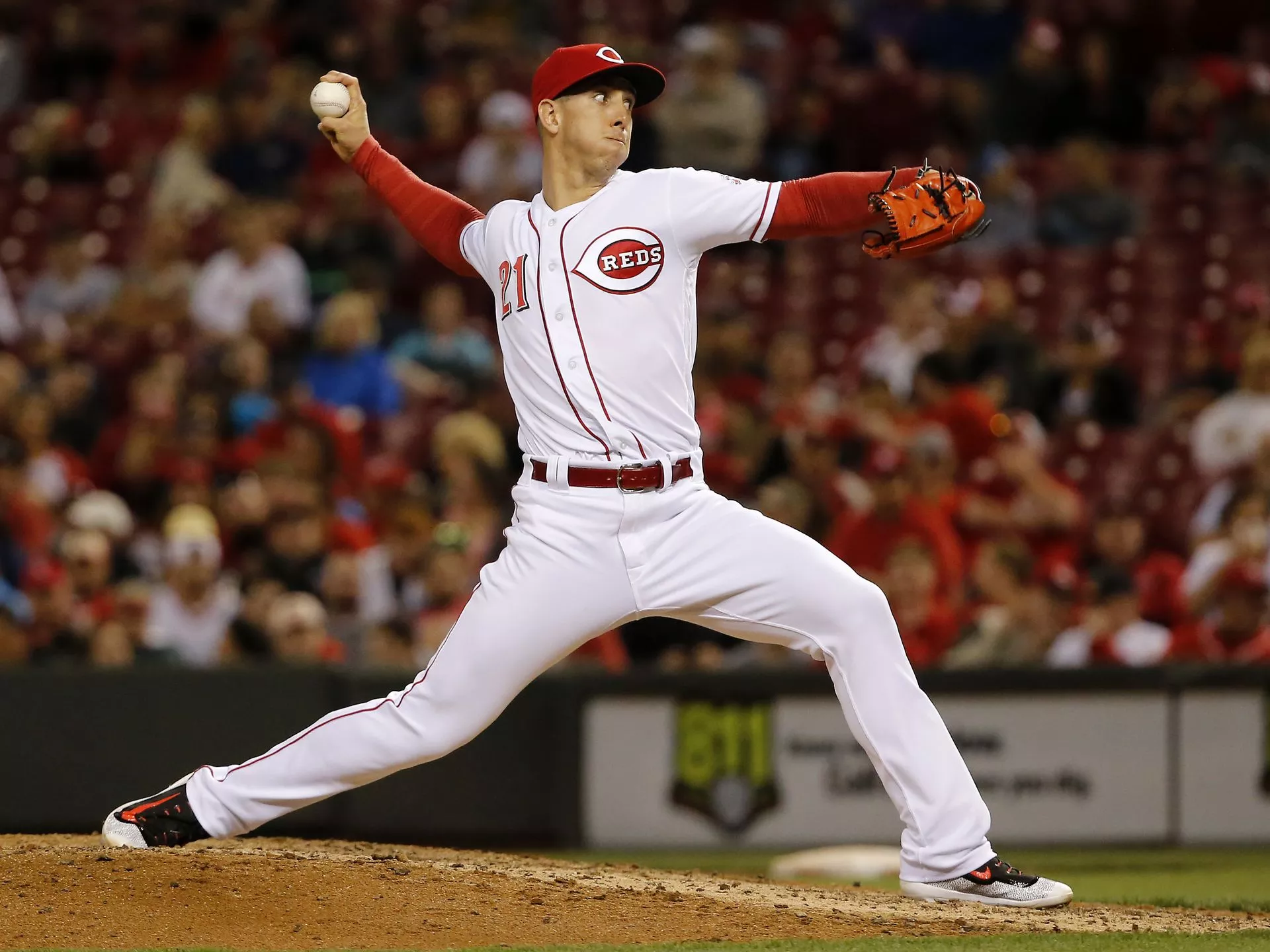 Michael Lorenzen is on course to pitch 86 innings. He had a good first month, with his highest K% and lowest BB%. But his BABIP has been all over the place, which is reflected in his ERA. Note that his xFIP for May and June are about the same and higher than league average. Lorenzen is on pace for 66 appearances, below league average. Not much evidence of fatigue with Lorenzen, unless you think a guy in his shape was worn out by May 1. 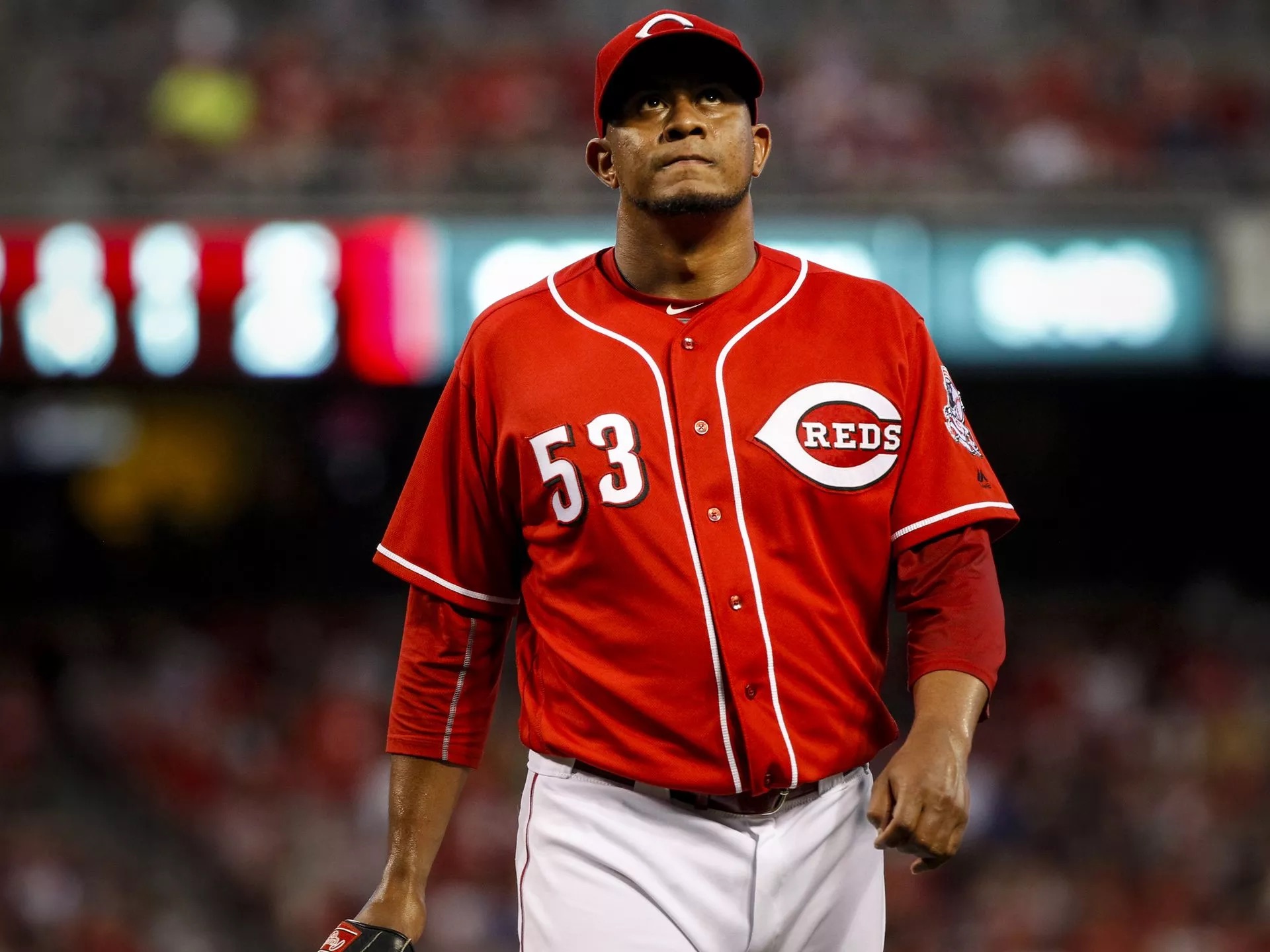 Wandy Peralta pitched like one of the greatest relievers in the history of baseball in April. There was en element of luck in his ERA (BABIP of .143). But most of his success goes back to strikeouts and walks, variables that he controls. His xFIP was just 1.66 in April. His numbers are a lot worse for both May and June. You could look at the monthly data and suggest heÃ¢â‚¬â„¢s tiring, but Peralta has only pitched 11 innings per month, which smack dab league average, not overuse. HeÃ¢â‚¬â„¢s on pace to pitch 70 innings. 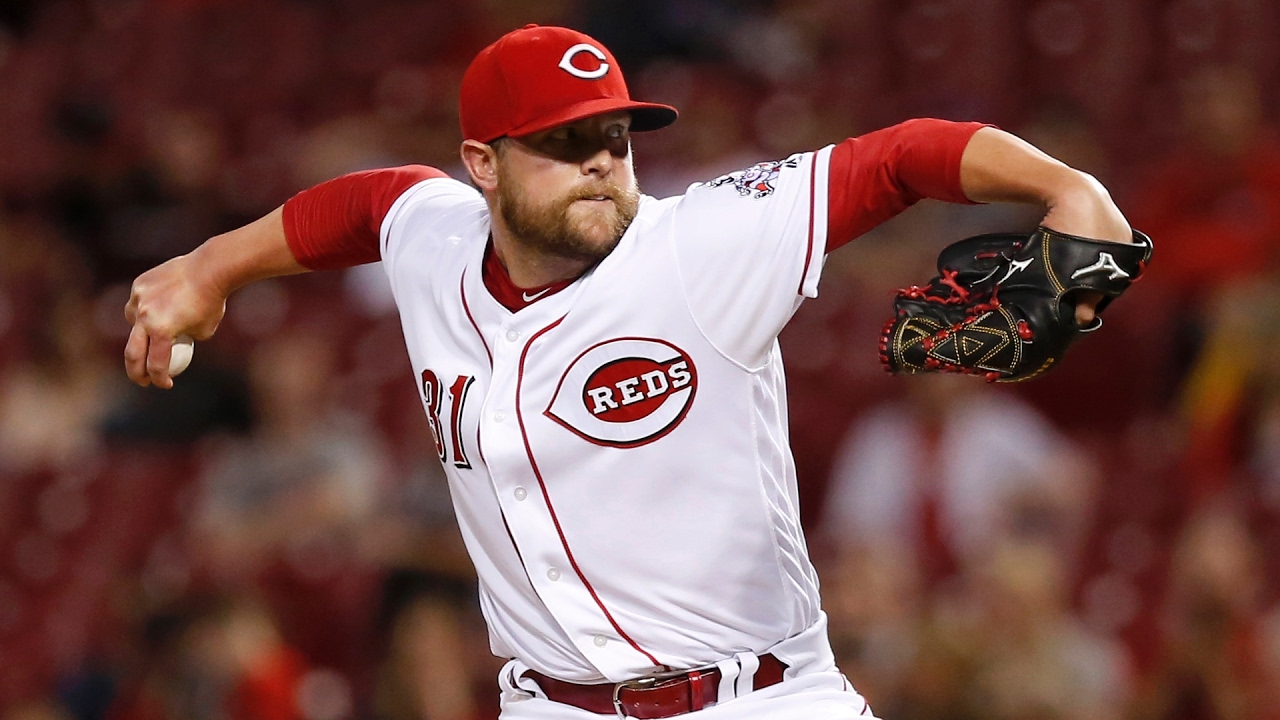 Drew Storen had a good April; a terrible, awful May and an average June. June is about what youÃ¢â‚¬â„¢d expect from him based on his long career arc. The reason his xFIP spiked in May was because he walked as many hitters as he struck out. You can argue about his effectiveness, but there is zero indication that heÃ¢â‚¬â„¢s fatigued based on June being worse than May. He also hasn’t been overused, on pace to pitch 68 innings 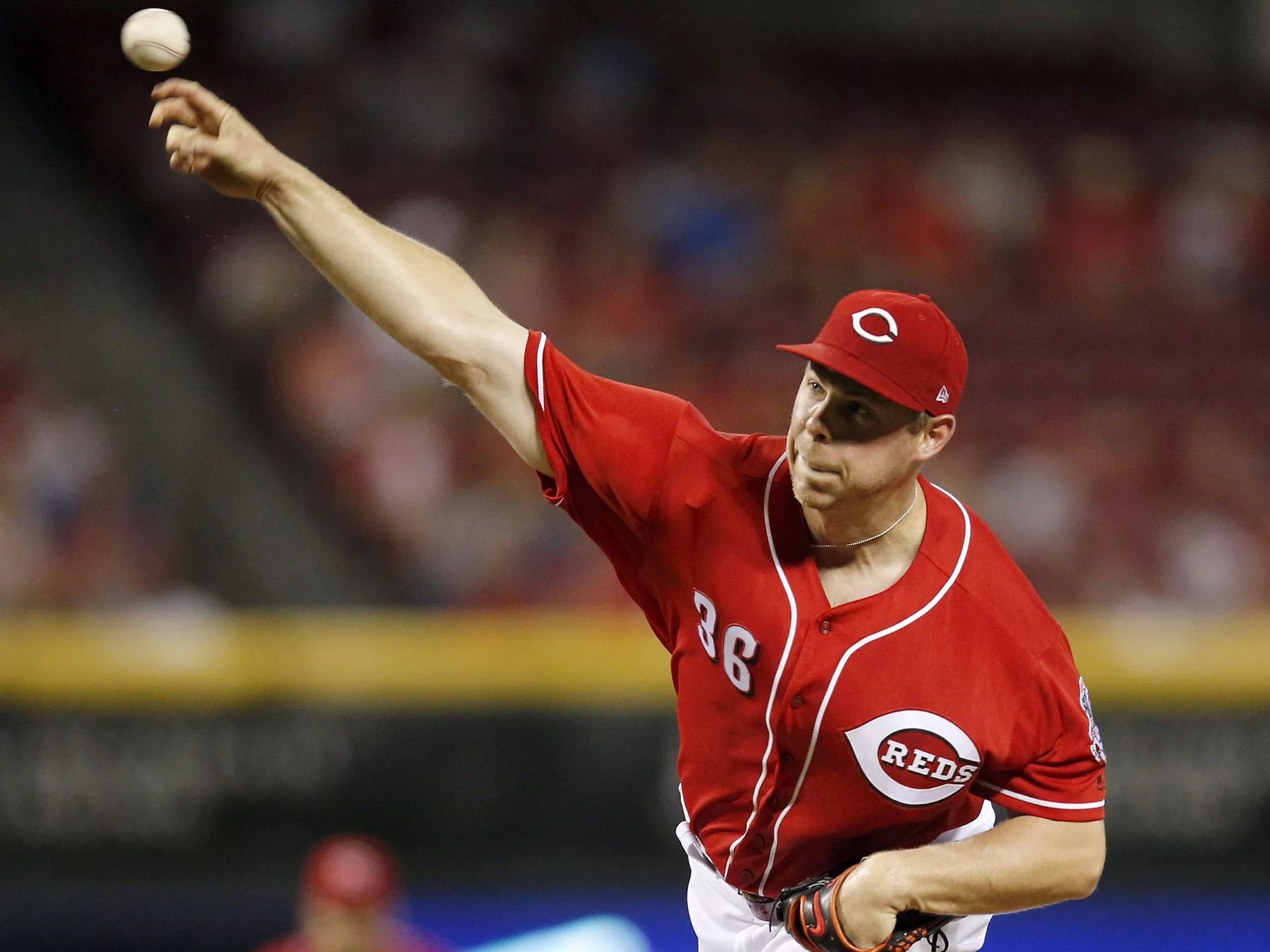 Blake Wood is on pace to pitch 78 innings, which is at the upper end of reliever use. As heÃ¢â‚¬â„¢s slid down the bullpen pecking order, Wood has taken on more game-out-of-reach innings. He actually pitched well in April, but had terrible luck with batted balls (.406). Note how his ERA is 5.23 in April but xFIP was his best month (2.75). But again, his worst month was May, based on what he controls. The big jump in ERA from May to June is a BABIP artifact. Look at his strikeouts (way up) and walks (way down) go in the other direction. With a below league average xFIP in June, itÃ¢â‚¬â„¢s hard to point at him getting worn down.

That leads to the question of how much workload is typical and how much is excessive?

In 1990, Rob Dibble pitched 98 innings and Randy Myers 86.2. It’s true that Norm Charlton only threw 50.2 innings from the Nasty Boys bullpen, but he also had 100+ innings as a starter that year. Tim Layana (remember him?) threw 80 innings that year. In 2001, Scott Sullivan threw 103.1 innings, the same year that Danny Graves and Jim Brower each had 80 IP.

Even today, many relievers throw well above average. Last year, six relievers threw more than 80 innings. Another 27 were between 70-80 IP.

Raisel Iglesias and Michael Lorenzen are on pace to be at the high end of IP numbers (although not appearances). But keep in mind they are both former starting pitchers who appear to be in excellent condition. Using them for more innings has been a declared feature, not a bug, of the team’s plan. ItÃ¢â‚¬â„¢s hard to imagine an extra inning or two at this point of the year has affected their pitching.

Bottom line, for the “tired bullpen” theory to be right, a pitcher would have to be throwing an above-average number of innings or appearances and be getting worse in June. There isn’t a single pitcher who fits that description.

And they pitched happily ever after …Ã‚Â

Our expectations for the Reds bullpen were unrealistic based on how well it pitched in April. As fans, I suppose we can choose to believe that the underlying talent is exceptional. In that case, it’s natural to look for excuses like workload to explain the bullpen’s regression. We can also believe in the Easter Bunny, Big Foot and the Tooth Fairy.

The simplicity of the beleaguered bullpen makes an attractive story, but facts stubbornly prove otherwise. The relievers havenÃ¢â‚¬â„¢t been overused, June hasnÃ¢â‚¬â„¢t been their worst month, and they were never going to keep up their April excellence. Another factor – one that I didn’t look at in detail here – is that the competition might simply be tougher in June. Six games vs. the Dodgers, three against the Nationals, etc. Maybe that variable, not fatigue, is the dominant one.

It’s no surprise the bullpen fell to earth with a thump in May. Remember, the vast majority of relief pitchers are erratic. This bullpen has actually rebounded a bit in June. But Wandy Peralta, Drew Storen and Blake Wood continue to see a lot of important innings. ThereÃ¢â‚¬â„¢s no track record on which to build a belief that bullpen will be outstanding. Even Michael Lorenzen has been worse than league average for two months.

So far, the front office has been successful in soaking up some of the long-relief and other innings with pitchers who cycle back to Louisville. There may come a time when the young, sacrificial arms run out and that neat trick quits working. Then you might see appearances and/or innings pile up above average for the current staff. So far, that isn’t the case.

Overuse is a tidy June narrative, but false. The bullpen just isnÃ¢â‚¬â„¢t that great.