[This post was submitted by loyal Nation member Matt Habel. If you remember, Matt wrote that checked in on the bullpen revolutionÃ‚Â recently. Thanks, again Matt.]

Close your eyes. Clear your head. Forget about the last two-plus weeks of baseball.

Take a journey back to the days of a declining playoff team, clinging to the shell of a once-formidable National League contender. Remember the team with an injured former MVP, a non-donkey-owning shortstop who pretty much only played defense, and the first of two straight years with a whole lot of grit.

Amid the horror and pain that was 2014, which turned out to be childÃ¢â‚¬â„¢s play compared to what would eventually come next, there were some exceptionally bright spots to cling to. Johnny Cueto had one of, if not the best season of his career, finishing 2nd in Cy Young voting to the greatest pitcher of this generation. Another was the former Little League World Series Champion, Todd Frazier. And then there was a backstop from Pennsylvania, Devin Mesoraco.

Mesoraco was drafted 15th overall in 2007 and made his way to the Reds in 2011. From 2011 to 2013, he amassed almost 600 at-bats and hit .225/.282/.359 with a not-nice 69 wRC+ and some above average defense to be exactly replacement level with 0.0 fWAR. Despite strong performances at all of his minor league stops, there was not much evidence at that point to believe his success was going to translate to the big leagues. Then, 2014 happened.

Calling it a breakout year would not quite do it justice, as Mesoraco put together one of the best campaigns of all catchers that year. With not much else to cling to, Reds fans jumped at the chance to believe that an elite starting catcher could be theirs, something that had eluded the club for many years. The front office bought in too, inking Devin to a team-friendly 4-year, $28MM contract through his age 30 season. Check that positon off the list.

Since then, things have not gone well for the Reds or Mesoraco. Injuries cut both of the next two seasons short for Devin while the Reds lost a whole bunch of games. Catcher slowly crept back up the list of the Reds priorities, as it doesnÃ¢â‚¬â„¢t seem possible for a person with bad hips and shoulders to be able to squat and throw for a living. At the same time, with the Reds finishing 30+ games out of first place, nothing really seemed to matter anyway.

Coming back to the current day, we have reason for optimism on both fronts, especially in the camp of Mesoraco. Watching Devin play well again has been a highlight of the year so far for sure. And since the Reds have basically reverted back to playing like last year for the past two weeks, letÃ¢â‚¬â„¢s spend some time looking to see if we have found the 2014 version of Devin and if he is here to stay. 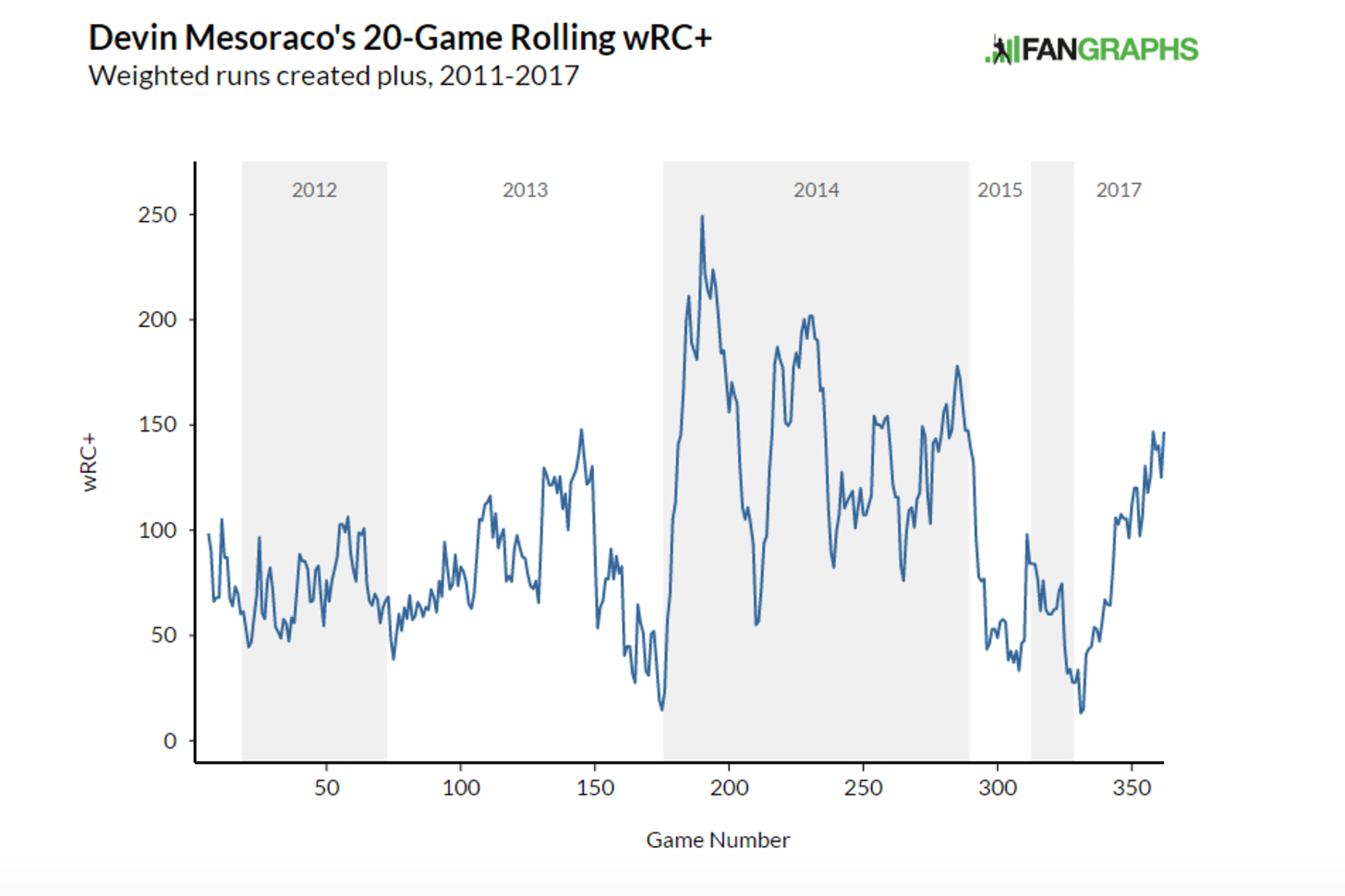 MesoracoÃ¢â‚¬â„¢s 20-game rolling wRC+ shows just how much he improved in such a short time and how much he has worked his way back to solid production after his injuries. Obviously those high peaks in 2014 are unsustainable, but he is on his way to putting up similar numbers if he can maintain the steady climb we are currently seeing. 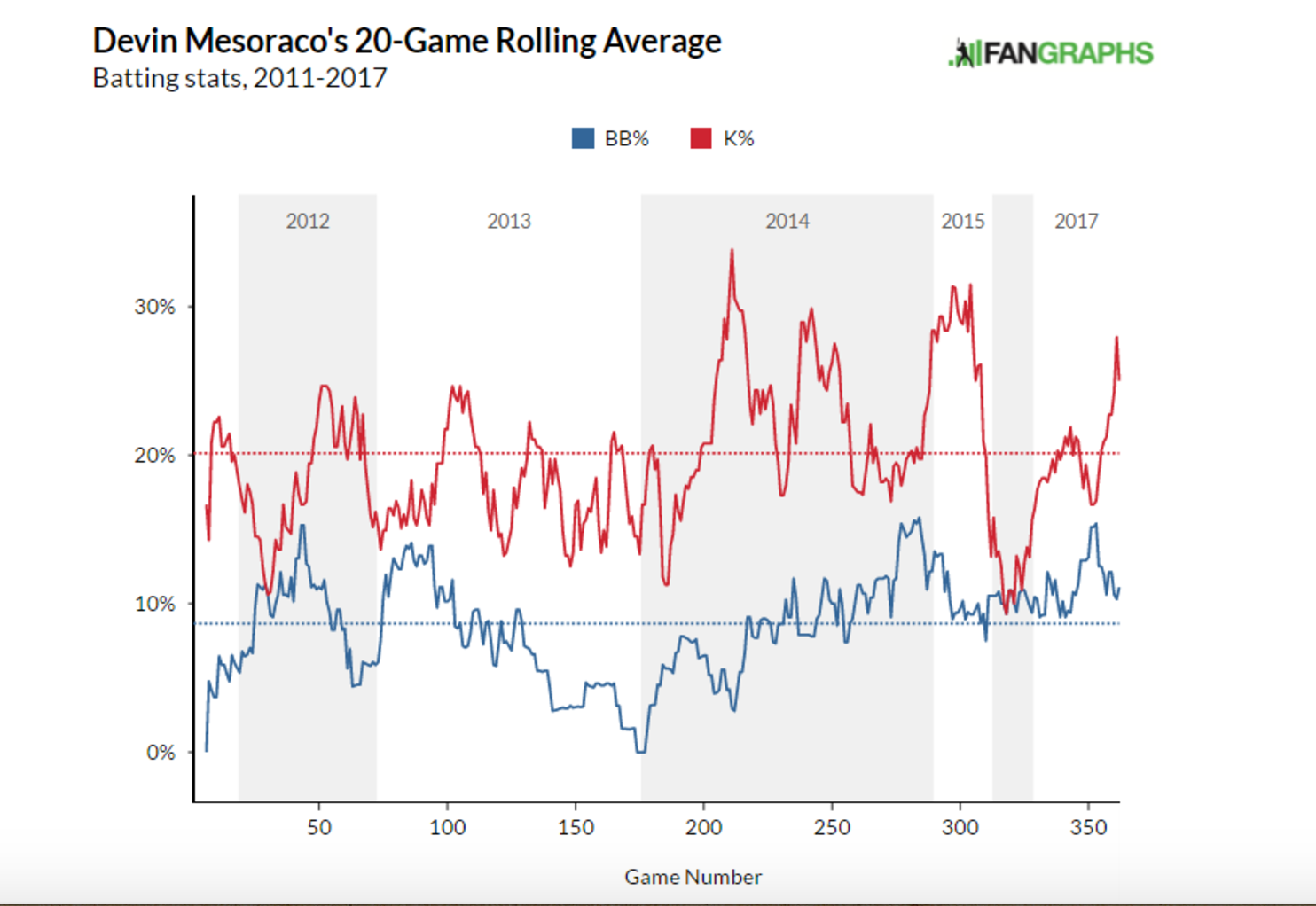 Mesoraco has always been a high strikeout guy and 2014 was no exception. His spikes in K% go hand in hand with his drops in wRC+, which would hold true for most players. While it is a good sign that he has kept producing despite this spike in K%, it may be a sign that he could be facing a regression soon. Another good sign is that his walk rate has improved and is currently higher (11.4%) than it ever has been (8.7% career), which will certainly help prevent production from bottoming out when the swings and misses become more frequent. 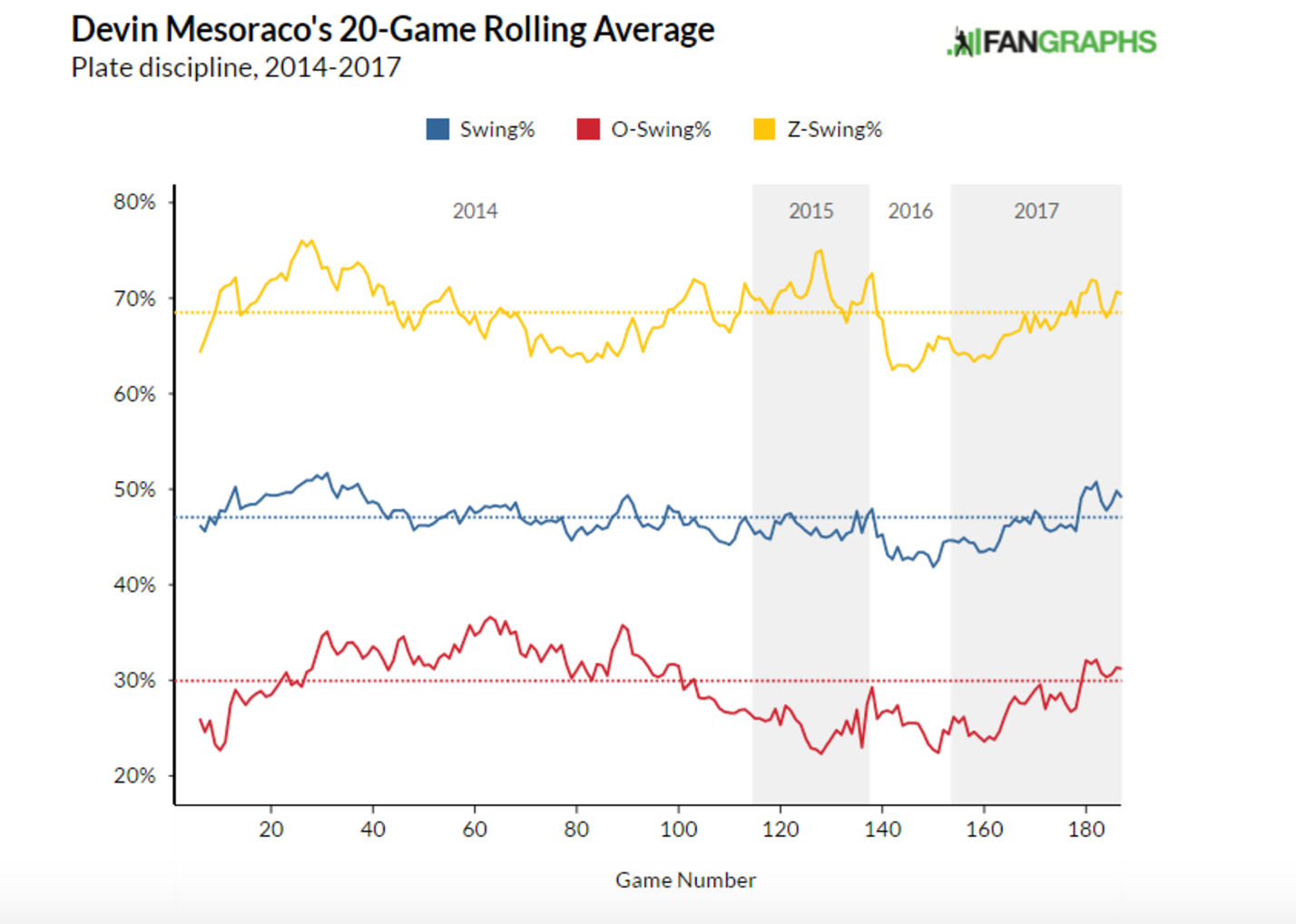 Looking at just 2014 Ã¢â‚¬â€œ 2017 now, we see his overall Swing% is about the same as 2014 as a whole (despite the up-and-down throughout the year) and is slightly below career numbers, while O-Swing % is about 2% lower in 2017 than both 2014 and career. The trend for this year though is that he has been getting less selective as we go through the year, maybe as a result of getting more comfortable and wanting to swing more. This is contributing to the recent increase in K% we saw above but doesnÃ¢â‚¬â„¢t appear to be anything too alarming, unless it results in even higher K% and a return to career average in his BB%. 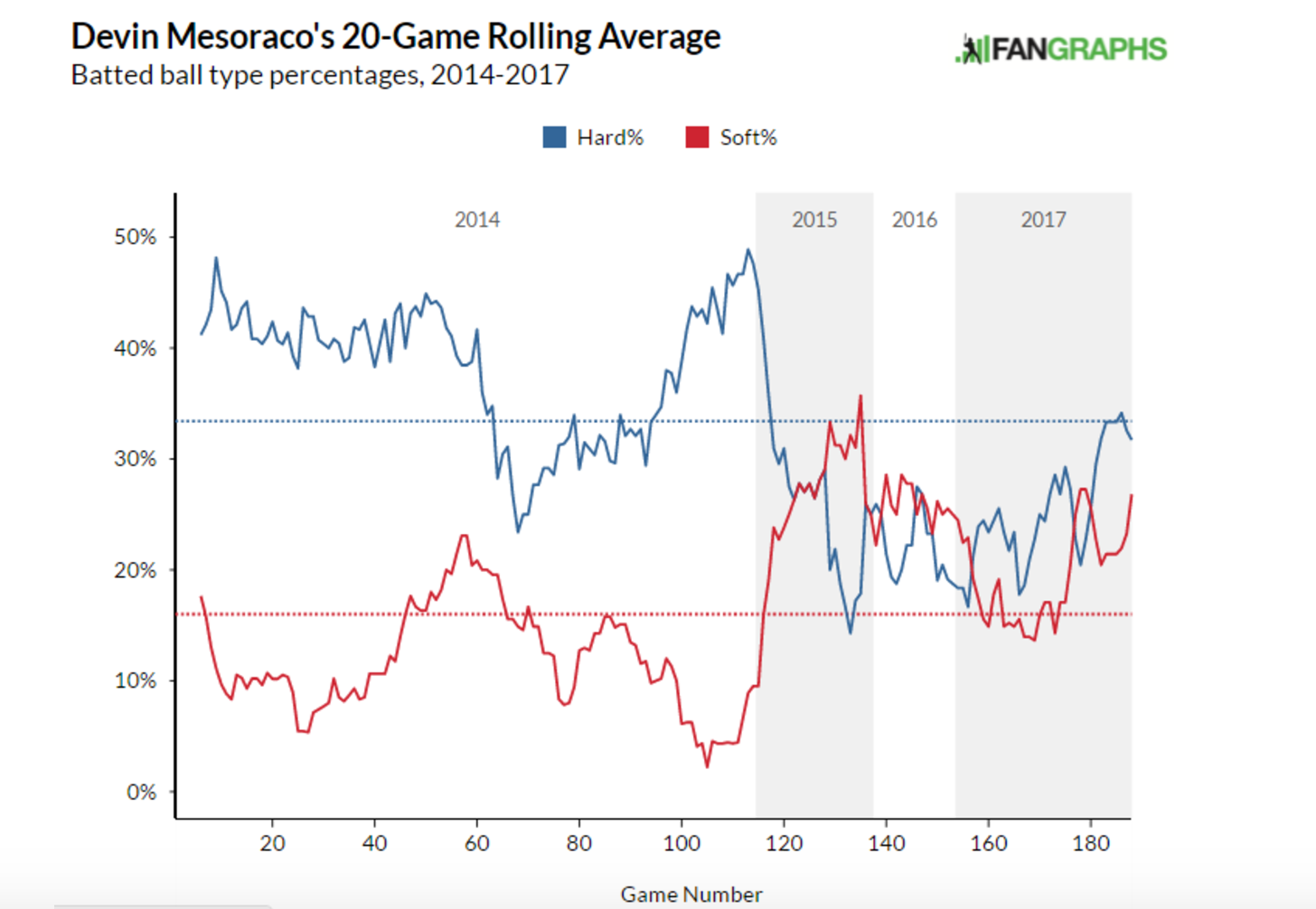 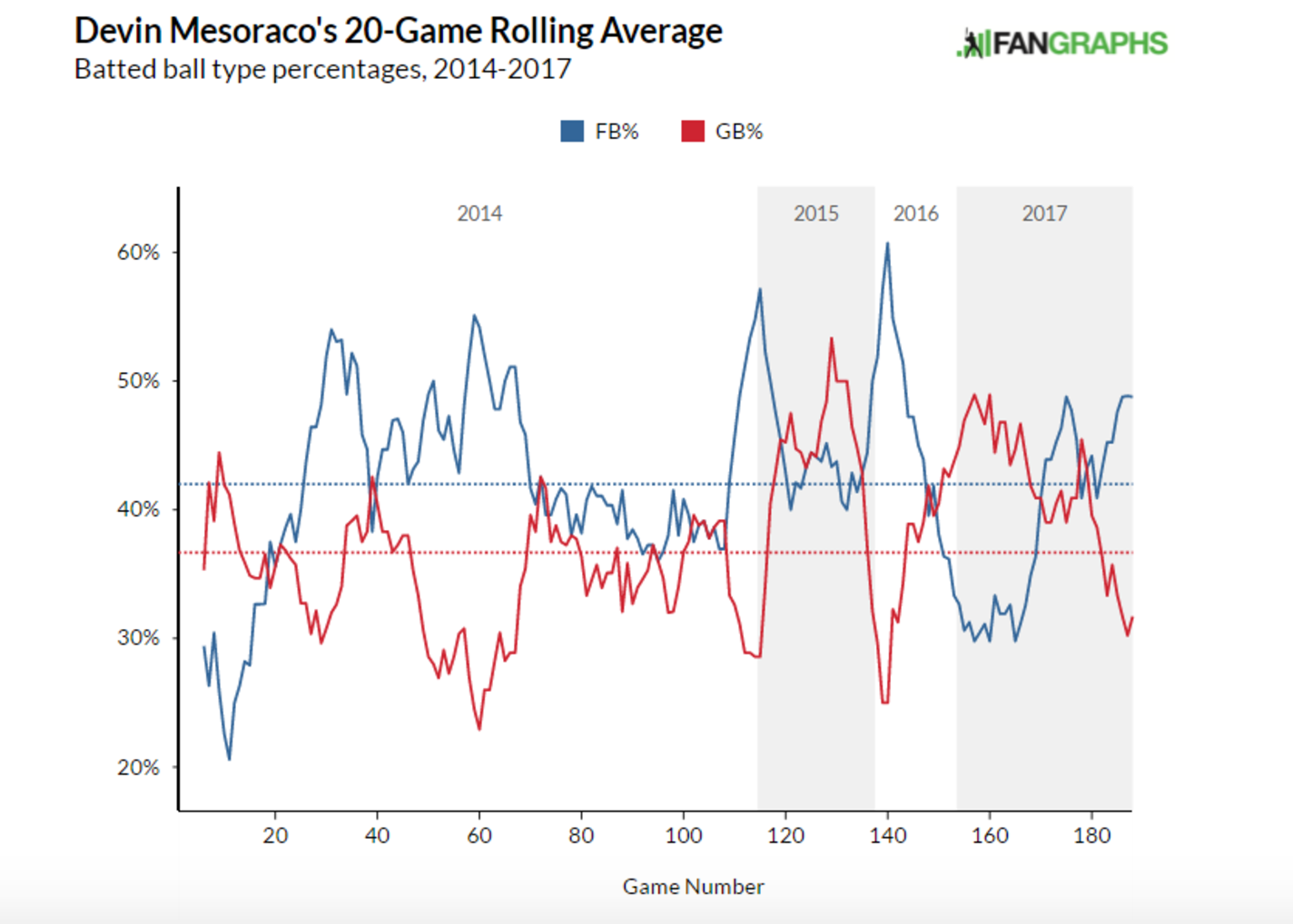 These last two charts show exactly why Devin was able to create so much value at the plate in 2014. He smashed the ball for much of the year, ending up with a 38.7% Hard% and a 12.0% Soft%. FB% vs GB% in 2014 is another stat that really needs no explanation. Looking at these graphs, particularly his Hard%, it is no surprise that his ISO was .260, good for 6th in baseball among all players with 400+ plate appearances. And while he has been improving his exit velocity throughout the year, he is currently nowhere close to those 2014 numbers. FB% is right where is was and is above his career average but his GB% is a little high. Despite not quite getting back to his epic production from three years ago, these numbers appear to be trending well and have room for further improvement.

All-in-all, it is tough to say whether Devin has found his magnificent stroke from the Ã¢â‚¬Å“gloryÃ¢â‚¬Â days of 2014. While his production has continued to increase, his plate discipline and K% show he might be heading towards some regression. And while he may never hit the ball as hard as he did back then, if he can continue to improve on his FB/GB ratio, then we will continue to get a healthy dose of Mesoraco funkblasts. There is still much to be seen regarding the future of Devin with this club, but given the other issues Reds fans have to worry about right now, there is no reason not to be optimistic.