Homer Bailey returns to the mound for the Reds today, making his first start since last August. Here’s a timeline for the right-handed Texan while with the Reds organization, including a few posts about him at Redleg Nation:

2004 (age 18): Drafted in Round 1, Overall 7 in the amateur draft out of LaGrange High School, Texas. Named 2004 Baseball Athlete of the Year by the National High School Coaches Association. Assigned to Reds Rookie League.

May 9: First mention (that we can find) of HB on Redleg Nation

December 7: Homer Bailey Traded for Jermaine Dye (or not)

May 12: Complete game shutout against Pirates, allowing 4 hits, no walks and 6 Ks.

2011 (25): Starts season on DL, makes three rehab starts in Louisville and another DL stint in July. Finishes season with 22 starts for Reds, including last 12 in a row.

October 9: Bailey pitches maybe the best game of his career in the most pressure-packed moment. In the NLDS against the Giants, Bailey pitched 7 innings, giving up just one hit and one walk, striking out 10. 88 pitches, 60 strikes. “I wrote this back then:Ã‚Â IÃ¢â‚¬â„¢ve been to many sporting events. The NFL. March Madness. Michigan vs. Ohio State football in Ann Arbor and Columbus. Kentucky basketball against Bobby Knight. The Fab Five vs. Duke. Rose Bowls. And IÃ¢â‚¬â„¢m not sure IÃ¢â‚¬â„¢ve ever been in a better atmosphere than the Great American Ball Park rocked tonight. (At least until the last ten minutes.) Homer Bailey gave a breathtaking performance. Six strikeouts in a row the second time through the line-up. After the fifth inning, fans were on their feet chanting Ho-mer, Ho-mer, Ho-mer as he walked back to the dugout. IÃ¢â‚¬â„¢ve never seen anything like that for a pitcher at GABP.” The Reds lost Game Three and the series. I’m still not over it. (Box Score)

July 3: Reflections on the No-Hitter from a Homer Homer

2014 (28):Ã‚Â Signs 5-year/$19 million AAV extension in February. Despite battling a pulled groin, a herniated disc and getting hit in the jaw by a batted ball, Homer makes 23 consecutive starts for the Reds, 145 innings, shut down in early August for flexor mass surgery.

February 19: What the Bailey Extension Means for the Reds

February 21: The Toys of Our Adulthood

2015 (29): Starts season on rehab from flexor mass surgery. makes two starts for Reds in April then is shut down for Tommy John surgery. Misses rest of season.

2016 (30): Starts season on rehab from Tommy John surgery. Makes first of six starts for Reds on July 31. Reds decide to shut him down after August 28 start of 1 inning.

August 12: Pitches 6 shutout innings against the Brewers, with 11 Ks and 1 BB

February 1: What to Expect From Homer Bailey (Jason Linden) 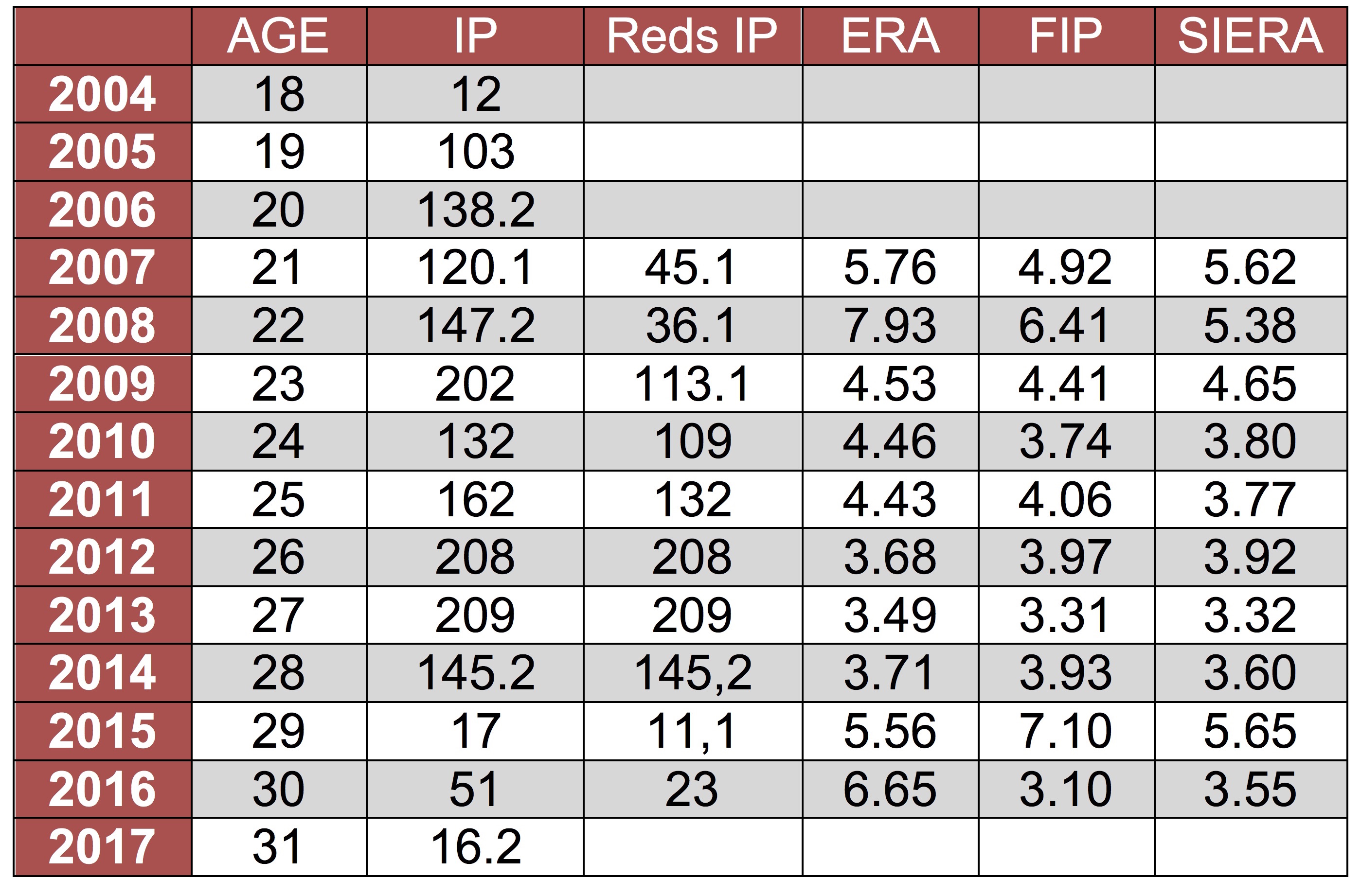