The recent NHL expansion draft has had me thinking: the MLB has been pretty static for awhile, we could use a couple of new teams. What if Rob Manfred decided to add another team in Las Vegas too, and perhaps Nashville while we’re at it? Both teams could pluck three players from each current franchise, giving them a seed of 90 professional baseball players from which to build a team.

Naturally, the same rules as the NHL expansion draft would apply Ã¢â‚¬â€ current teams can protect a set number of players, trades can be put in place to protect others, so on and so forth. But 90 players still is more than enough talent to field three levels of professional baseball. The rest could come from free agent signings and future actual MLB drafts.

In this potential future world, let’s say each current franchise is allowed to protect 12 total players Ã¢â‚¬â€ three infielders, two outfielders, one catcher, three pitchers, and three prospects. Teams must designate utility men as counting either toward an infield or outfield role, and players must have not exceeded rookie eligibility to be considered a prospect.

Who would the Reds keep around?

Because this is entirely hypothetical, I won’t consider the potential stratagems of who would be available on other teams and the nuances of roster construction. Instead, from the perspective of a Las Vegas or Nashville GM, I will simply choose the six best available players that the Reds leave unprotected to abscond with. But first, an overblown but well-reasoned delve into those protected players is necessary.

Using one slots here on Nick Senzel frees up the latter three prospect spots for further pitching protection. Also, truth be told, the Reds don’t have a single infielder on the Major League roster worth protecting outside of Joey Votto. If a team wants Zack Cozart or Jose Peraza, good for them, but there would almost certainly be better options at short and second elsewhere around the league. Protecting Eugenio Suarez is more of a “why not” and a “Senzel is a good year away” decision. If available, Suarez would most likely be nabbed given his production, but protecting Dilson Herrera or Alex Blandino or even recent-signee Jose Garcia feels like an unnecessary precaution.

Oh buddy, this is where it gets hard. Jesse Winker is a given here, the man has torn up AAA this year to the tune of a 127 wRC+. The other spot becomes a bit more difficult. There are arguments for both Scott Schebler and Adam Duvall, but I’d rather an expansion team take a shot on them continuing their production and freeing up a spot for Winker. On the flip side, there are arguments to protect more prospects such as Taylor Trammell or T.J. Friedl (and trust me I really wanted to protect Friedl here), but both of them are too far off for it to make sense. Billy Hamilton is not a great centerfielder, but he provides excellent value for the Reds and would be an incredibly savvy pick for Las Vegas or Nashville to scoop up. Protecting him and Winker keeps the future intact without sacrificing too much of the present.

I don’t foresee Devin Mesoraco’s career lasting all too much longer, or at the very least, him being an above average catcher for the Reds. If an expansion team wants to roll the dice on him, so be it, but Stephenson is the far more attractive future option.

Anthony DeSclafani, Cody Reed, and Michael Lorenzen all would be acceptable selections here as well, especially with Garrett’s recent struggles and admittedly low ceiling. However, Disco’s injury worries me about his long term more than Finnegan’s does, and I prefer Garrett to Reed tenfold. Also, you can never take Lorenzen over Iglesias. These picks effectively sacrifice either Homer Bailey or Anthony DeSclafani depending on an opposing team’s strategy, but the Reds have a pitching logjam as is and need to get the future eating some innings rather than waiting on the main course to arrive.

Again, I really wanted to keep T.J. Friedl around here (Is my love for him irrational? Maybe.), but pitching takes precedence 11 times out of 10. With a guaranteed rotation of Finnegan, Garrett, Castillo, Romano, Mahle and potentially keeping Disco, Reed, Robert Stephenson, and Rookie Davis in the mix, the Reds pitching staff starts to look a lot better than its current iteration. That said, this ideal world depends on Bronson Arroyo hanging it up and Scott Feldman packing his bags, but both of those will happen eventually. Right?

Also, I’m excluding Hunter Greene from this narrative because he is yet unsigned, but should he sign soon, he would absolutely take Romano’s place in the above.

Who do the Reds end up losing?

Going with the system of Las Vegas and Nashville alternating picks, the Reds lose:

Feel free to sub in Cody Reed for Robert Stephenson, but otherwise I’m pretty confident these are the guys the Reds would end up forfeiting. My protection plan keeps most of the future secure, but yields a lot of talent from the current Major League roster. Jose Peraza would also probably get some looks as would Scott Schebler, but with the other options on the table, I feel pretty confident the Reds would be able to hang onto them, whether they wanted to or not.

Who would you protect and who would you see going as a result? It’s not as if everyone (or anyone) agrees with me as is:

Repeating my schadenfreude from last week, this week’s fines will not be issued to baseball players, but basketball players instead. With the NBA draft last night, I have come to realize that I now resent the NBA in a way that I previously only reserved for the NFL. Of late, basketball is the only thing that can occupy the minds of sportswriters and commentators, with Steph Curry this and Lavar Ball that consuming every minute and every word. I enjoy watching basketball unlike football, but this has reached preposterous levels. I simply don’t need to read 15 articles about Lonzo Ball’s draft stock. Or about what Kevin Durant’s move out west means for the league at large. Maybe sportswriters just need to learn how to pitch an original idea.

Fine:Ã‚Â No website, television station, or magazine even remotely connected to sports is allowed to recap the NBA draft using the words Warriors, Ball (either as a proper or common noun), or LeBron. Only one instance of the words “The Process,” Porzingis, or 3-1 lead are allowed. Free use of “please, someone tell Stephen A. Smith to be quiet.”

Fantasy Baseball:Ã‚Â Out of the blue, an opposing team proposed trading Whit Merrifield and Robert Gsellman for Yonder Alonso. I accepted immediately. I know the real Yonder. This isn’t for real. It can’t be.

Authorial Views:Ã‚Â Closing in on 30,000 views for the year which is only just under a sixth of Chad’s views. You could say this race is getting serious. 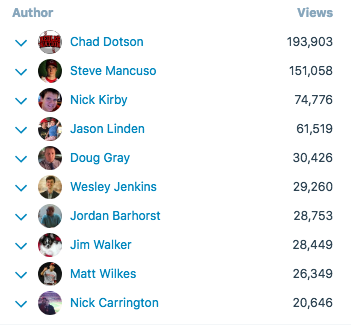