They banged 97. The Reds and the Dodgers radar guns, time and again. Minor league players who were spectators at the spring training game on a back field at the Goodyear complex had gathered to watch the new guy, Luis Castillo. It didn’t take long to trade knowing grins and giggles. Castillo dazzled: no walks, many strikeouts. Weak ground balls, pop-ups. The young right-hander carved up the Double-A Dodgers.

What stood out was the control Castillo possessed over his off-speed pitch, clocking in at 80-83 mph. Cambio, the players whispered, the Spanish word for a changeup. Cambio.

Standing there, close enough to read the radar guns and hear the murmurs, it crossed my mind that Luis Castillo might prove to be the team’s best acquisition of the rebuilding process. 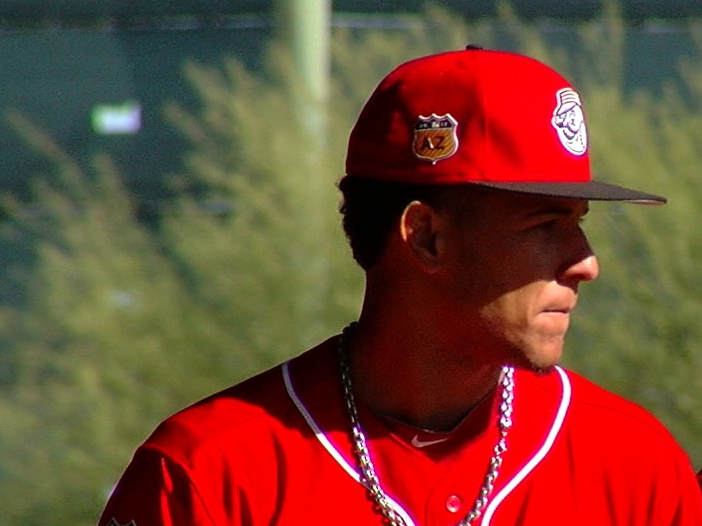 The San Francisco Giants signed 19-year-old Luis Miguel Castillo out of the Dominican Republic in 2012. Castillo arrived with two pitches, so the Giants assigned the 6’2″ right-hander to the bullpen. The Miami Marlins acquired Castillo in a trade before the 2015 season, asked him to learn a curveball, and converted him to a starter. He pitched for the Marlins’ A/A+ affiliates as a 22-year-old.

Give the Marlins credit: The starting rotation suited Castillo. His control improved in 2015 and again in 2016. But the greater command and new role also brought fewer strikeouts. As a 23-year-old still pitching at the A+ level, Castillo struck out fewer than seven batters per nine innings. That’s low for a pitcher throwing a 95-98 mph fastball. That slippage in K/9 is surely what allowed the Marlins to consider trading Castillo, who at the time rated the #1 or #2 prospect in their system.

This January, the Reds obliged and sent an established pitcher Dan Straily to Miami for three players. Reliever Austin Brice and outfielder Isaiah White were in the deal. Luis Castillo was the presumed headliner. Scouts were split on Castillo, but most saw in him the potential to become a major league starter, maybe even a good one.

The Reds wisely kept Castillo in a starter’s role. But crucially, they had him give up his curveball in favor of a slider to complement his heater and changeup. That plan has worked.

Oh, what heights Castillo has hit.

The past three months, Luis Castillo has dominated the Southern League. Based on strikeouts and walks, he’s the equal of major leaguers Chris Sale, Clayton Kershaw and Max Scherzer in their respective leagues. In 80.1 innings Castillo has struck out 81 and walked only 13, overmatching Double-A hitters. 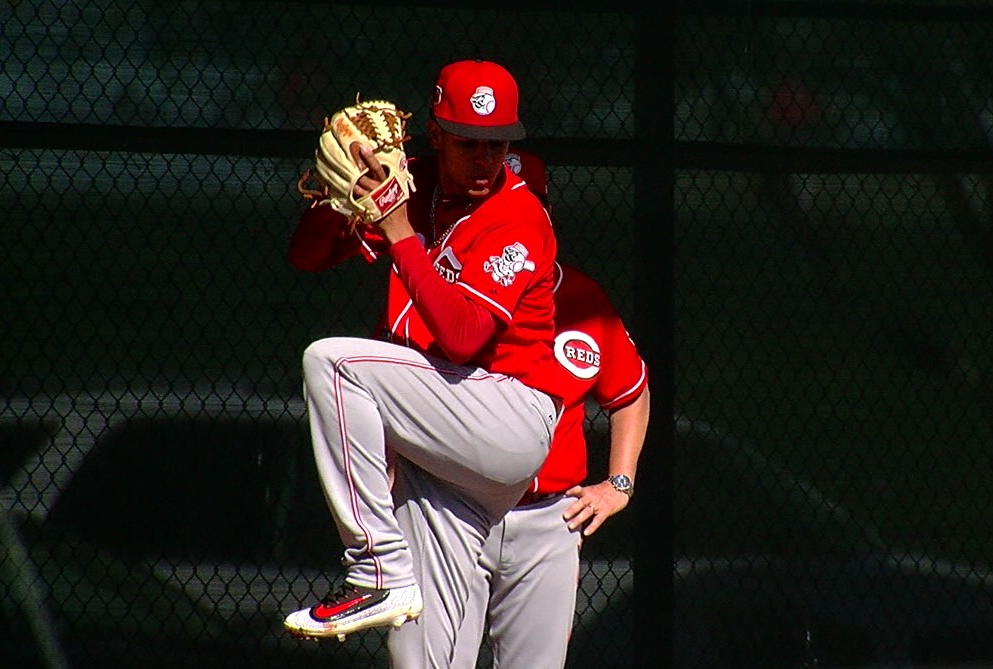 “Luis’s changeup is a plus big-league pitch,” said Joe Hudson, his catcher in Pensacola. “That’s his pitch, that’s his go-to. All his pitches move down for the most part. If I need a ground ball, I’m calling for a changeup.”

But it’s Castillo’s growing mastery of the slider – a pitch he’s developed since spring training – that accelerated the 24-year-old’s path to tonight’s start in the big leagues. Yes, Bryan Price urges caution, noting Castillo’s slider is still evolving. But slider is the pitch Jeff Brantley wanted to talk about during Wednesday’s Reds radio broadcast. Brantley credited it for Castillo’s development jump, comparing it to Wandy Peralta’s sudden improvement from last year to this one. The slider allows Castillo to strikeout more hitters than he did with the Marlins.

By age, Luis Castillo fits amid the cadre of young pitchers working their way through the Reds system. He’s older than Cody Reed, Brandon Finnegan, Rookie Davis, Sal Romano and Robert Stephenson, but he’s younger than Amir Garrett and Michael Lorenzen. Less than two years separates the oldest from youngest in that group. In recent seasons, Castillo has been a bit older than average in his leagues, likely due to transitioning from reliever to starter. He won’t be an elder tonight at Nationals Park.

In explaining why the young Dominican got the nod for the start, Price said it was because Castillo was already on the 40-man roster and because Castillo throws strikes. Cody Reed and Robert Stephenson take note.

So overture, curtain, lights. On with the Luis Castillo show. 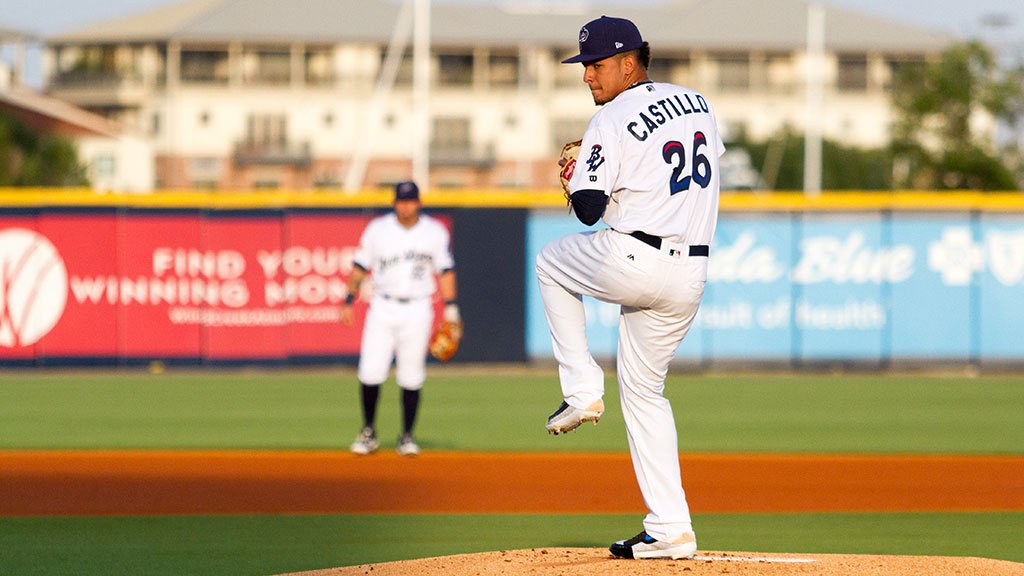 Beyond the debut of a promising pitcher, there’s something else to watch in the next few days. An even more important curtain might be rising tonight.

Does Luis Castillo’s call-up signal a new phase in the Reds rebuilding process?

Maybe. The front office deserves credit for putting a 24-year-old Double-A pitcher on the mound instead of another weary, washed up veteran. The Doug Fisters and Tim Lincecums are still free-floating in the netherworld of unsigned pitchers. It must have been tempting, before the last two weeks, to consider bringing on a well-worn arm. Sure, the team already had a couple too many of those in their rotation, but Dick Williams could have made it one pitcher worse and he didn’t.

Losing eleven out of twelve has a way of clarifying the landscape, particularly the horizon. Two weeks ago, the Reds were fresh off a glorious 4-game sweep of the Cardinals, one game below .500 and two out of first place. But any flicker of hope fans or the front office might have harbored was extinguished by a tidal wave of losses. If anyone had taken their eye off the rebuilding ball, the horrors of the last 14 days should produce the needed focus.

So let’s not exaggerate the on-field importance of tonight’s start. Full-on expectation tempering is recommended. One appearance won’t be a reliable indicator of how Luis Castillo will perform as a major league starter. Amplified nerves, the lack of familiarity with batters and they with him, are all one-off factors. And the Reds have upped the degree of difficulty for Castillo’s major league debut. Not only is it on the road, but Dusty Baker’s offense leads the NL in average, power and runs scored. Castillo’s mound opponent will be Stephen Strasburg, one of the top ten pitchers in baseball.

Commit this sentence to memory and repeat it tonight as needed: Luis Castillo is a kid making his first start above the Double-A level on the road against one of the best teams in baseball.

But beyond the narrow on-field assessment of one pitcher and one game lies the question of wholehearted commitment to rebuilding the starting rotation. For nearly three months, we’ve watched through partly covered eyes an über-popular 40-year-old struggle through 14 starts. We’ve squinted hard and cocked our heads in service to the illusion that Scott Feldman and Tim Adleman really aren’t that bad in the rotation after all. And somehow, there were four starts by Asher Wojciechowski and four more by Lilsalverto Bonilla. What we’ve seen with the starting pitchers isn’t sorting or rebuilding.

It’s time to remake the rotation with a single-minded focus on seasons to come.

Perhaps Luis Castillo’s start (no matter how it goes) is the leading edge. Homer Bailey follows tomorrow and Brandon Finnegan’s return is imminent. More steps can and must be taken. Maybe we’ll look back on June 23, 2017 as an inflection point toward greater heights.

The night of nights when the Reds starting rotation became more future than futile.