The Luis Castillo Era started in an unexpected way, with the pitcher grounding out to the shortstop. Once on the mound, Luis Castillo struck out the first batter he faced, throwing fastballs of 98, 99 and 100 mph before using his slider to get a swinging strike. 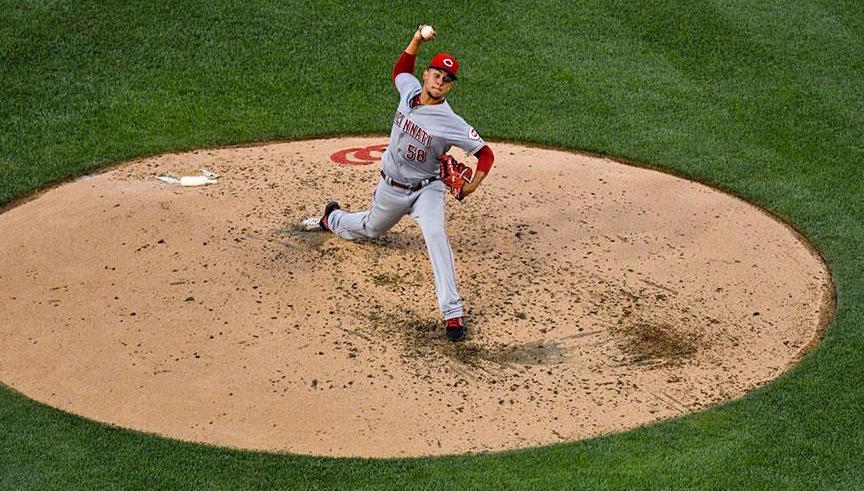 Five innings, five strikeouts, five walks and five hits. Luis Castillo gave up a couple solo home runs and was helped by three inning-ending double plays. Castillo’s impressive fastball ran around 98 mph all night, ranging from 96 to 100. Yet he had significant trouble getting his changeup over for strikes, so he induced few swings on those pitches. He attempted just a handful of sliders, although used the pitch for two of his five strikeouts.

In the third inning Castillo loaded the bases with walks, but induced Ryan Zimmerman to hit into a 4-6-3 double play on a 99-mph fastball (nicely turned barehand by Jose Peraza).

Lots of drama in the bottom of the 5th. The Nationals got the first two batters on and Castillo’s pitch count was sneaking up. Michael Lorenzen was getting ready fast in the bullpen. On the seventh pitch of his at bat, Bryce Harper popped up a Castillo fastball for the first out. Then Castillo (finally) got a changeup over for a strike and got Zimmerman to roll over on it for an inning-ending double play.

A game where Castillo consistently gets his changeup in the pitch tunnel long enough to look like a strike will be a rout, even against big league hitters. Tonight, he left the game with a 5-2 lead.

Remember our Castillo motto for the evening: Luis Castillo is a kid making his first start above the Double-A level on the road against one of the best teams in baseball.

The Reds jumped on Stephen Strasburg in the first inning. After Billy Hamilton struck out, Scooter Gennett lined a home run to right field. Joey Votto and Adam Duvall singled. Eugenio Suarez walked. Scott Schebler, Devin Mesoraco and Jose Peraza each drove in a run to give the Reds a 4-0 lead. They added another run in the 3rd when Mesoraco singled to drive in Schebler who had doubled.

The Reds didn’t score after that.

Michael Lorenzen, who pitched the 6th inning, and Wandy Peralta, who started the 7th, did not do well. They gave up three runs. Blake Wood also pitched poorly in the 8th. Drew Storen got a big out. Tony Cingrani came on in the 8th to record three outs with two runners on. He also got Bryce Harper out in the top of the 9th. Fabulous appearance for Cingrani. Austin Brice got two outs in the 9th.

You’ll hear the narrative that the bullpen is tired from overuse. I don’t buy it, yet. The only one with more than 34 IP is Lorenzen. Throwing 32-34 IP at this point of the season isn’t that much. Lorenzen, at 39 innings, strikes me as a guy in good enough shape to have pitched five more innings. Counter-narrative: perhaps the bullpen is regressing a bit recently because they aren’t really as good as they’ve pitched the first two months. Or maybe just a bump in the road.

Bryan Price used Raisel Iglesias in the 10th inning. Iglesias struck out the first two batters he faced, then gave up two cheap hits bringing Bryce Harper to the plate. Price decided to have Iglesias pitch to the best hitter in baseball with a base empty. Harper swatted a 2-2 pitch over Schebler’s head to win the game.