On the night of the MLB Draft, most thoughts are on the future, and more specifically, Reds 1st Round Draft Pick Hunter Greene.Ã‚Â  If you haven’t read Doug Gray’s write-up at RedsMinorLeagues.com, you should go do that now.Ã‚Â  It is quite good. This game recap will still be here when you get back.Ã‚Â  Teaser: The game wasn’t good.

After a terrible time in Los Angeles over the weekend, the Reds headed south to face off against the Padres.Ã‚Â  Future Jimmy Buffett-listener Bronson Arroyo started the game.Ã‚Â  As you might have been able to guess, it didn’t go well.Ã‚Â  Arroyo gave up 9 earned runs in 4.2 IP.Ã‚Â  Again…this should not come as a surprise to you.Ã‚Â  Bronson Arroyo is not a major-league caliber starting pitcher.Ã‚Â  This is generally what should be expected.Ã‚Â  The Reds should be embarrassed that they keep running him out there every 5 games, injuries or not.

-Scott Schebler had a bases-loaded single in the first inning, along with another single.Ã‚Â  He almost hit a homer in the 4th inning. I like Scott Schebler…even if he experiences phantom bean-balls.

-Adam Duvall had a single and double, along with a pair of strikeouts.

-The Reds ‘pen pitched 3.1 scoreless innings.Ã‚Â  Too bad the game was over before any of them threw a pitch.

– Scooter Gennett had a pinch-hit RBI single.Ã‚Â  Yeah, these are the things under “The Good.”

-Arroyo was bad.Ã‚Â  But you already knew that.Ã‚Â  His ERA is now 7.01.Ã‚Â  His FIP is 7.00.Ã‚Â  His xFIP, which gives him league-average luck on fly balls leaving the yard, is still an unsightly 5.75.Ã‚Â  It is hard to have an xFIP that high, given the adjustment.

-Jose Peraza has been decent defensively so far this season, but he made a poor play in the Padres 6-run 2nd.Ã‚Â  With the infield in, he had a very catchable ball carom off his glove into right field.Ã‚Â  Following the missed pop-up in LA, Peraza’s stock is pulling back a bit. If he can’t play above-average defense, he’s not a starter (yet).

-The Reds offense was fairly bad tonight.Ã‚Â  A few guys got on base and a few guys went warning track, but mostly they made Luis Perdomo look like a good pitcher, which he isn’t.Ã‚Â  The two runs in the 1st inning were aided by some not-great Padres defense.

-The Reds also drafted a player named “Jeter Downs.”Ã‚Â  I fully support this pick, as anyone with “Jeter” in their name is a born winner.

-Defense and speed have their place, but I really wish the Reds didn’t have 33% of the lineup covered by guys who can’t hit well and have little projection (Hamilton, Peraza, Pitcher). 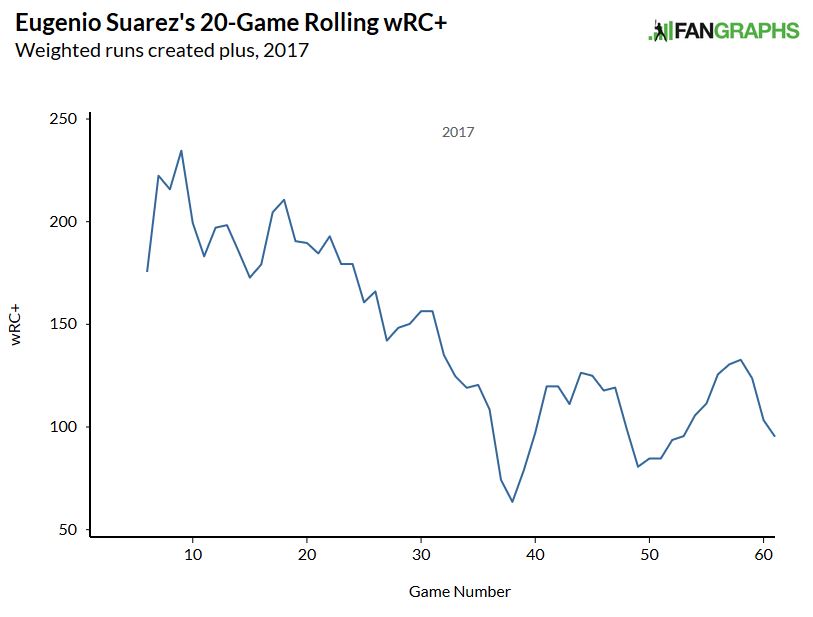