The Good
–It was a scoreless tie when the Reds came to bat in the bottom of the fifth against St. Louis starter (and old friend) Mike Leake. Joey Votto singled with one out to get things going, and Adam Duvall followed up with a double to center that gave the Reds a 1-0 lead. After Scott Schebler was hit by a pitch, REDS LEGEND (TM) Scooter Gennett singled to right-center, scoring Duvall and moving Schebler to third. Schebler proceeded to score on a throwing error by NECKTAT LEGEND (TM) Yadier Molina. Reds led 3-0.

That was the score one inning later when Zack Cozart picked up an infield single. Votto followed with his 16th home run of the season, a two-run shot that gave the Reds a 5-0 lead.

–Scott Feldman was very good today, throwing seven shutout innings on four hits and no walks. I like this version of Feldman. He’s now 5-4 with a 4.09 ERA.

–Adam Duvall was 3-4 with a double, with all three hits coming off the guy he was traded for, Leake. REDS LEGEND (TM) Scooter Gennett was 2-4 with an RBI. 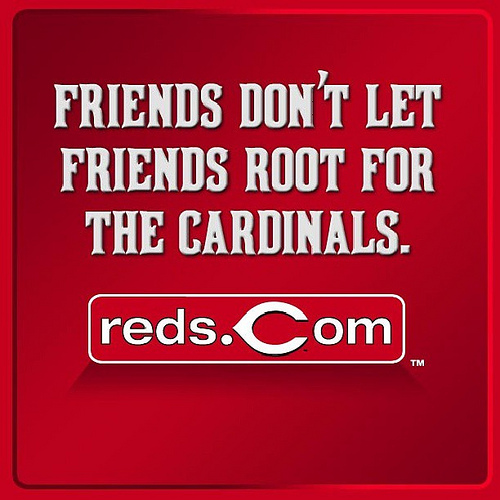 –Keep moving, nothing to see here.

Not-So-Random Thoughts
–The Reds swept the Cardinals in a four-game series for the first time since 2003. This is fun, eh?

–The ol’ Redlegs scored 28 runs during this series. That’s the most Cincinnati has scored versus St. Louis in a four-game series since 1970 (July 24-July 27). Prolific.

–Cincinnati is now one game below .500, and they have a chance to gain ground on first place Milwaukee if the Brewers lose tonight.

–This was actually not a vintage Joey Votto 4-4 performance; he saw only 8 pitches in those four at-bats.

–Amir Garrett will start for the good guys tomorrow, as the Reds open a series against the Dodgers in Los Angeles.

Redleg Nation likes it when the Reds go.