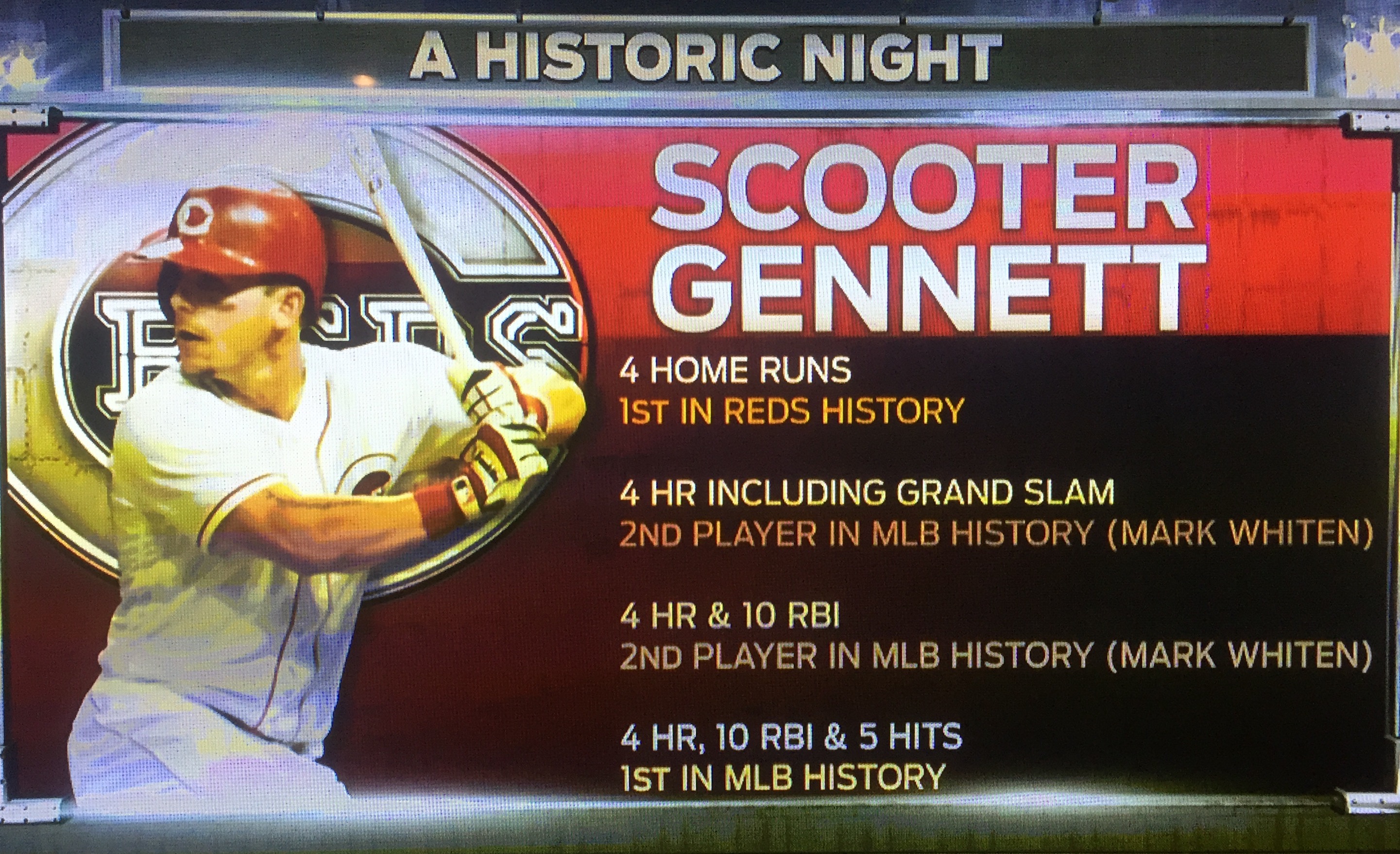 The Good
–The immortal Scooter Gennett wrote his name in the Reds history books tonight with a dazzling game: 5-5 with 4 home runs and 10 runs batted in. Starting in place of the injured Scott Schebler, Gennett singled home a run in the first. He put the game away with a third-inning grand slam that gave the Reds a 5-0 lead.

The next inning, Eugenio Suarez hit a bases-loaded triple to extend the lead to 8-0. One batter later, Scooter hit his second homer of the night, to center field. That’s 2 HR, 7 RBI so far.

Scooter wasn’t done. In the sixth inning, he hit a solo shot to the opposite field. 3 HR, 8 RBI.

Then, in the eighth inning, everyone was on their feet for Scooter’s final at-bat. With a runner on base, Gennett got down two strikes, then hit a laser to right field that got up just high enough to reach the seats. Four home runs, 10 RBI, 17 total bases. Amazing.

There aren’t enough superlatives to describe what we saw from Scooter Gennett tonight. The four home runs tied a major league record — he’s the 17th player to accomplish the feat — and established a new single-game Cincinnati franchise record. The ten runs batted in ties Walker Cooper for the all-time Reds club record.

He’s only the second player in the entire history of Major League Baseball to have 4 homers and 10 RBI. He’s the first player in baseball history to go 5-5 with 4 HR and 10 RBI.

Let us tell all our children and grandchildren about The Legend of Scooter Gennett.

–Drew Storen and Tony Cingrani — in his return to the big league roster — pitched scoreless innings of relief.

The Bad
–Keep moving, nothing to see here.

Not-So-Random Thoughts
–What did we just see?

–Check out the video of Billy’s blast from the first inning below. He crushed that ball.

–Chris and I are frantically trying to find out if we can add a Scooter chapter to our upcoming book. What a night.

I always enjoy a Cardinal beatdown

Maybe the Reds actually should retire the number 4.

Be sure to get your tickets for the Reds game on August 26, when the Reds will unveil the Scooter Gennett statue on Crosley Terrace.

Scooter Gennett has hit 9.5% of his career HR in tonight's game.

…and this one belongs to the Scooter!