[This post was submitted by loyal Nation member Matt Habel. If you remember, Matt wrote that Losing Isn’t EverythingÃ‚Â recently. Thanks, again Matt.]

Earlier this year, there was a lot of discussion around Bryan PriceÃ¢â‚¬â„¢s bullpen management in terms of which players he used in the highest leverage situations. Given the monumental improvement of the relief core in 2017 compared to 2016, Price seemed to make a big adjustment in how he managed the talented group. FanGraphs even wrote aÃ‚Â piece comparing the Reds to the juggernaut that helped push Terry FranconaÃ¢â‚¬â„¢s Cleveland Indians club all the way to the World Series last October. However, recent trends had me skeptical this was still occurring and I started by looking at Raisel Iglesias and Michael Lorenzen to see how their usage has changed.

From April 7th to May 9th, Iglesias went two innings five times, appearing only ten times in that span of over a month. Since May 9th, he has not pitched more than one inning at a time and has appeared in six of the last nine games. That is trending away from the multi-inning usage that Price talked about and showed us for the first month of the year. Lorenzen was a very similar story, going two innings or more from April 10th to May 9th and only one inning or less since then. He also has the three inning game in Pittsburgh, coming on with bases loaded and no outs in the 5th inning, which really sparked the conversations about PriceÃ¢â‚¬â„¢s new philosophy. LetÃ¢â‚¬â„¢s give Price the benefit of the doubt and go a little deeper.

The two statistics that I will rely on for this will be FIP and LI, or Leverage Index. FIP is a pretty common stat but some may not be as familiar with LI. LI is the metric that quantifies the pressure a player is facing at any given time. The iteration of this stat we will look at specifically is gmLI, which measures a pitcherÃ¢â‚¬â„¢s average LI when he enters into the game. This is a good way to evaluate if a pitcher is used more during high or low leverage situations.

In order to provide some context about where the Reds stand, we will first look at all 178 qualified relievers in the league. 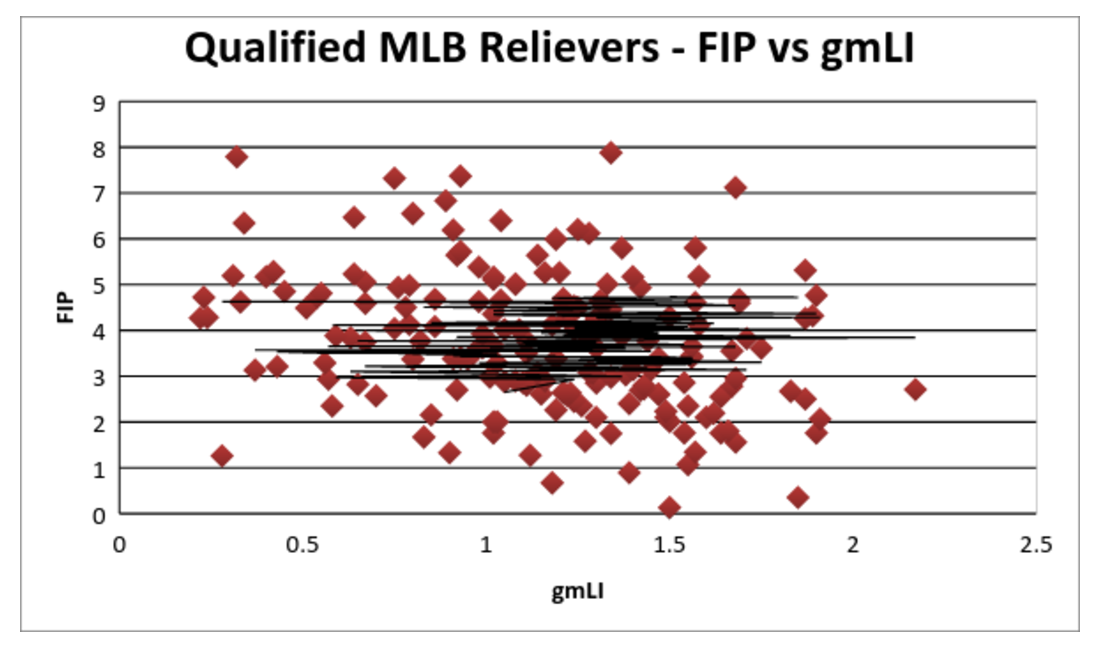 The correlation between FIP and gmLI exists, but it is not very strong. There are some pitchers who have performed well that are pitching in low leverage situations and some pitchers who have struggled but have pitched in high leverage situations. The below charts give some more detail and break out the top ten players by gmLI and FIP. Keep in mind that gmLI is rated as 0.00-0.85 being low, 0.85 Ã¢â‚¬â€œ 2.00 being medium, and 2.00+ being high. 1 is rated as average.

Only one pitcher has averaged entering games in high leverage situations, though the rest of the list is still well above average. The callout here is only one of these players, Craig Kimbrel, breaks the top ten in FIP. There are also quite a few players in the bottom half of the league, including Tony Watson who has been one of the worst relievers in baseball so far but has pitched in a lot of high leverage situations. Overall, a pretty mixed bag. 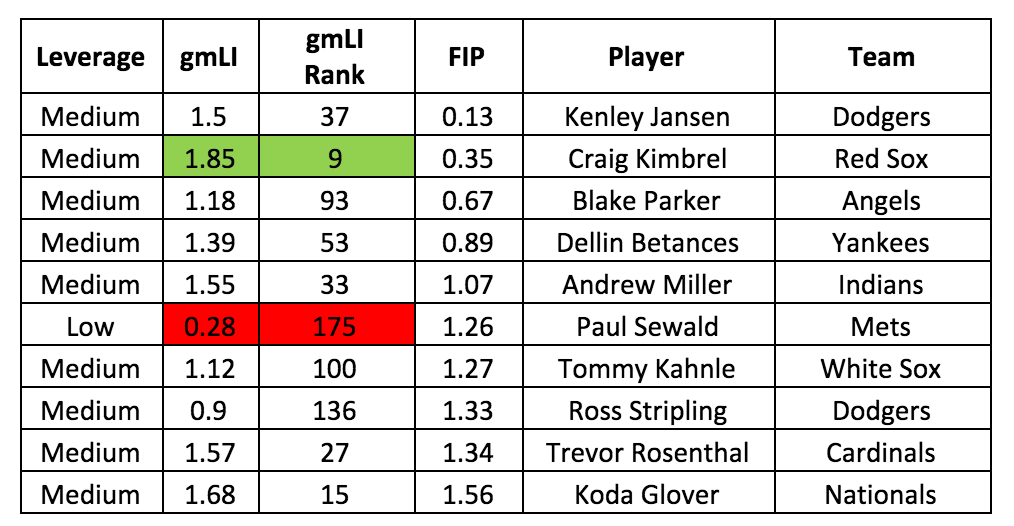 Ranking the pitchers by FIP we recognize a lot more names but still seem to get another mixed bag in terms of usage. Kimbrel is again on the list and nine of the ten pitchers fall into the medium leverage category. However, some are falling in the bottom of the list in gmLI, including Mets rookie Paul Sewald, who has performed very well this year but has only come into games with that are significantly below average in terms of leverage. Ã‚Â Ã‚Â

Now we can take a look at the Reds players and see how they compare.

The two names that we would hope to see at the top of the list are in fact there, which is a good sign for Reds fans. This list instantly seems to have more of a pattern compared to looking at the whole league. Even spot-checking a few other teams showed me that the Reds appear to be more in line than most. When I ran the correlation coefficient with the 6 players above for comparisons sake, the R2 value came out to 0.3138, significantly higher than the league as a whole (0.0859).

This chart shows that Blake Wood is potentially being under-utilized compared to Drew Storen, which further solidifies Wesley Jenkins’Ã‚Â recent point that Storen should be used in more low leverage situations. This is also an interesting data point because Price recently took some heat from Marty Brennaman (and probably some others) for putting Wood in the tied-game in the 8th inning against the Blue Jays. Wood did give up the deciding home-run but that doesnÃ¢â‚¬â„¢t mean it was a bad decision. Sometimes that is just how baseball works. Ã‚Â Ã‚Â

The main takeaway is that the Reds three best relievers are being inserted into the game with the most on the line, which is consistent with the anecdotal evidence that has been popping up since the beginning of the year. Wandy Peralta has come on very strong this year and supplemented Iglesias and Lorenzen, who at times show the potential of the next coming of the Nasty Boys. Price is taking advantage of his new and improved unit and has certainly gained some favor among the fans. Ã‚Â When compared to the rest of the league, it seems that he might indeed be adhering to the bullpen revolution closer than most. Ã‚Â Most importantly, he has managed to win a few more ballgames than a lot of people expected him to. And at the end of the day, that is all that matters.