The Reds entered play on Monday with one of the worst starting pitching rotations so far in MLB history.

The Reds are desperate for anyone to step up, and tonightÃ‚Â Asher Wojciechowski did just that. He allowed just two runs over six innings, and kept the ball in the park, something he was not able to do in Toronto in his first start. Wojciechowski was helped by Adam Duvall, who threw out two runners in big situations.

The Reds offense had just two hits off Carlos Martinez through six innings, and he was absolutely cruising. Billy Hamilton lead off the seventh inning with a perfect bunt single. That seemingly got Martinez off his game out of nowhere. He fell behind to the next hitter Zack Cozart 3-0, and Cozart ended up with a single. Joey Votto then drew a clutch walk, and the bases were loaded. Martinez was able to strike out Duvall, but Eugenio Suarez ripped a double that Dexter Fowler nearly made an incredible catch on, and the game was tied. Martinez exited the game, and Scooter Gennett hit a big double in a tough lefty-lefty matchup against Kevin Siegrist to give the Reds a 4-2 lead.

The Reds bullpen was great just like all season. Bonilla, Lorenzen, and Iglesias didn’t allow a hit over three innings. The Reds secured a 4-2 win in the first of four games against the Cardinals at GABP. 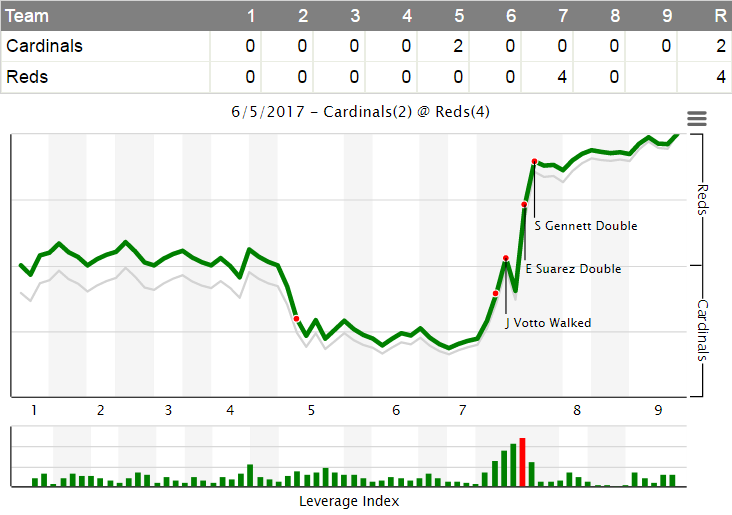 According to FangraphsÃ‚Â WPA statisticÃ‚Â (winning percentage added), the most important play of the game was Eugenio Suarez’ RBI double off Carlos Martinez with 1 out in the 7th inning, tying the game at 2-2.Ã‚Â That play increased the Reds chances of winning by 32.9% (from 40.3% to 73.2%). 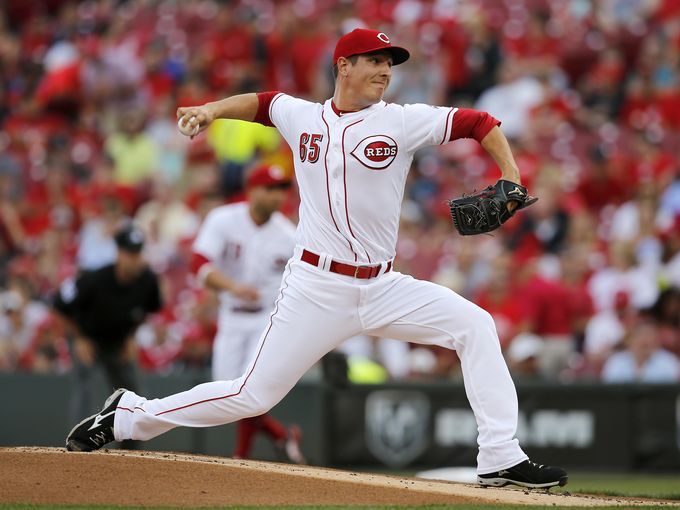 Asher WojciechowskiÃ‚Â gave the Reds a much needed quality start (6.0 IP, 8 H, 0 HR, 2 ER, 2 BB, 6 K, 2.05 FIP). He couldn’t keep the ball in the park against the Blue Jays last week, but against a Cardinals lineup that lacks power he was. He has done a great job throwing strikes so far with the Reds, as he has just 3 walks in 14.0 innings. 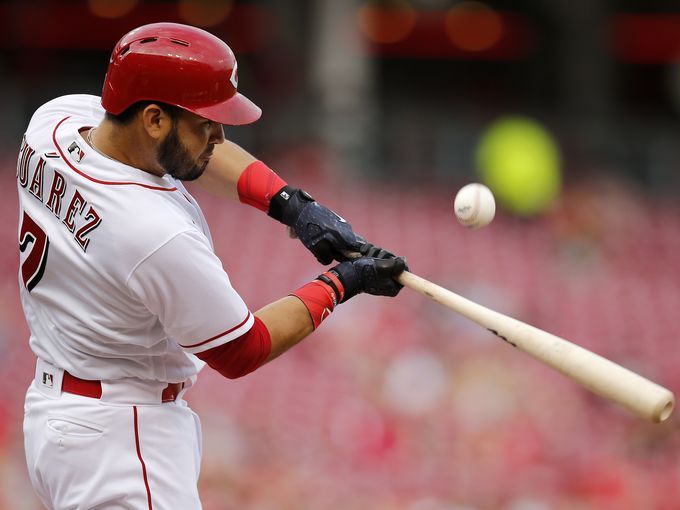 Eugenio SuarezÃ‚Â andÃ‚Â Scooter GennettÃ‚Â both had 2-RBI doubles in the 7th inning, which accounted for all of the Reds scoring tonight.

Billy HamiltonÃ‚Â got on-base twice tonight. His bunt single in the 7th inning started the Reds big rally. He was also robbed of a hit by a nice play by the Cardinals 2B DeJong. 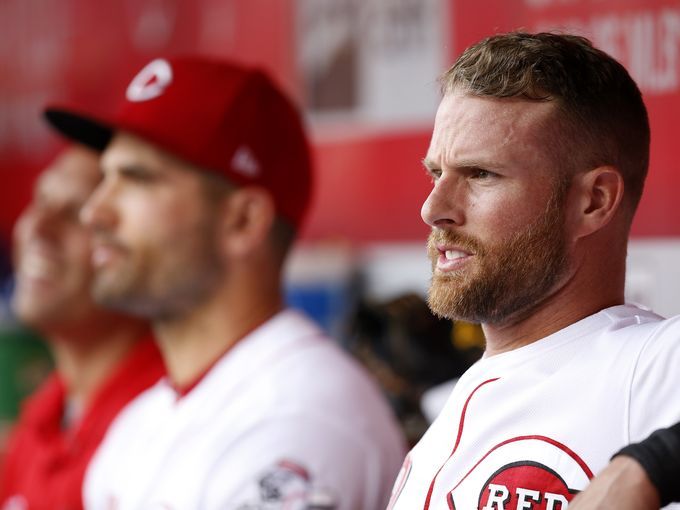 Zack CozartÃ‚Â had a two hit night, and is now hittingÃ‚Â  .348/.433/.620. The latest all-star ballot update was released today, and Cozart has moved up to second place among SS, about 57,000 behind Corey Seager.Ã‚Â Cozart has been climbing, and since the first release of the voting update last week, Cozart has received 283,234 votes. Seager has received 205,436 votes.

Adam DuvallÃ‚Â threw out two runners in the game, and both were huge to help out Wojciechowski.Ã‚Â Duvall had 16 defensive runs saved last year. That was the 2nd most among all LF in the MLB, and the 10th most among all MLB players in any one position.

You know what @Reds don't get enough credit for? The Raisel Iglesias contract. 3 yrs left on 7-year, 27 mill deal. Has 0.61 ERA in 24 games pic.twitter.com/i7wKbnVlY1

The Reds for whatever strange reason have owned Carlos Martinez this season.

Tonight’s version of what misinformed info did you hear from the Reds broadcast comes from our good friend Thom Brennaman. Adam Duvall (as stated above), threw out two runners. Thom went on a tangent about how he doesn’t believe in advanced fielding metrics because this off-season he heard that Adam Duvall was listed as a below average fielder. That would be cool, except Duvall had 16 defensive runs saved last year. That was the 2nd most among all LF in the MLB, and the 10th most among all MLB players in any one position. Jim Day doubled down on the advanced metrics being wrong about Duvall last season in the postgame show as well. Holy Moses.