Well May came and went without a moment’s hesitation, and the RedsÃ‚Â 11-13 April recordÃ‚Â proved to be truly indicative of their abilities as the team matched the two-under-.500 look for May at 13-15. Despite the Reds mediocre showing over the past 31 days, there have been some standout performers on the field who deserve special recognition, which brings us to the second edition of “Who Won ___?”

As a refresher on the concept, at the end of each month, I will create an arbitrary bracket with eight (sometimes four if it’s been a particularly miserable month) Reds players, coaches, or other affiliated persons who stood out that month. The player with the best stats is not guaranteed to win because sometimes stats lie and we should all embrace the human narratives of baseball. Also, having that person win would be no fun. “Rain Delay” is all about instilling fun into the sometimes hopeless Reds.

Again, a caveat: Seeding is unimportant but is a necessary means of structure. Therefore, the four contestants will be seeded byÃ‚Â who has the closest birthday to May 30, otherwise known as my birthday.

Over his last five games, Zack Cozart has hit .421/.542/.947 with 3 home runs. Scott Schebler, in his last five, has hit .263/.300/.632 with 2 home runs. It seems like a disservice to eliminate Swingin’ Scott for a whole month’s worth of accomplishments on the merits ofÃ‚Â just a five game stretch, but Cozart has also done this:

…and he’s really close to this:

Zack Cozart is 134,831 votes from Joey Votto buying him a donkey. #VoteCozart pic.twitter.com/rTZVEOWFbm

…so I really don’t feel all that bad for Scott Schebler. He’s had a nice month. He can call home and his family will say they’re proud of him. Cozart, on the other hand, might get a donkey. You tell me who’s won what here.

From my quick Google search, I learned the Billy’s and Joey’s birthdays are back to backÃ¢â‚¬â€September 9 and 10. You know what isn’t back to back but should be? Their spots in the lineup.

Somehow, someway, Billy Hamilton has managed to become a competent leadoff hitter for the Reds in the month of May. He hit .288/.339/.398, which is exceptional for three reasons:

What’s less exceptional about Billy’s stats is the .367 BABIP in May, meaning he will probably come crashing back down to Earth real soon. Regardless, he’s gotten a great head start on potentially stealing a hundred bags this season. It can happen; I believe.

But Votto had a 1.046 OPS this month, so he’s going to move on pretty handily.

Fangraphs just wrote a piece on Joey Votto addressing the question of how Joey makes the pitcher do what he wants. It ends with this kicker:

“HeÃ¢â‚¬â„¢s a counter puncher with a variety of counter measures, and itÃ¢â‚¬â„¢s allowed him to dictate action, to influence events, even in a sport where he doesnÃ¢â‚¬â„¢t possess the ball.”

There’s no question that Zack Cozart won the month of May; what he has done at the plate far surpasses anyone’s expectations of him and continues to astound. But Joey Votto’s study of the game and infinite ability to mind control his opponent in a sport that breaks the mental fortitude of most baffles me. Joey Votto didn’t lose the month of May by longshotÃ¢â‚¬â€he just didn’t do anything particularly out of the norm this time around.

He’s also going to be out one donkey, so we’ll let the man with the livestock raise crown.

Originally, Bryce Harper was going to be fined for his abysmal helmet throw at Hunter Strickland. For those who missed it, point and laugh as you will:

Bryce Harper said he knew he had two options.

He decided not to walk to 1st. pic.twitter.com/Wkmx8AEaVs

But then, another seemingly innocuous tweet arose. One that made the whole concept of mocking Bryce Harper for failingÃ‚Â in his efforts to throw an admittedly hard to throw object obsolete:

The NL Central has lost a combined 16 straight pic.twitter.com/CI8CoynjBI

Fines:Ã‚Â Each team must adopt the name of a Little League team (e.g. Cincinnati Purple People Eaters) until they win a game. If the Pittsburgh Magenta Dragons suddenly suffer a ten-game losing streak, then that’s just their fate.

Fantasy Baseball:Ã‚Â I’ve given up on the season. My record is 3-5, and I’m selling the veterans. It’ll be a quick rebuild though. I expect to be competitive in 2018 and hoist the championship trophy along with our Reds.

Authorial Views:Ã‚Â Back in eighth. Seventh was a fun ride while it lasted, but I look forward to my battle to the death with Jim Walker all summer. May the better blogger win. 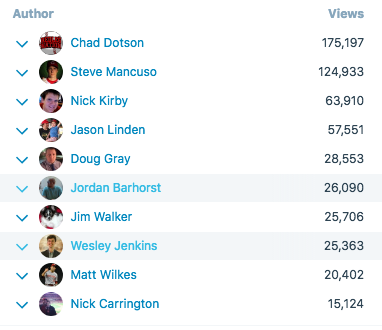