After waving silent bats for 8 innings, the Reds struck for two runs in the bottom of the 9th to tie the game. Then Devin Mesoraco, batting for the first time tonight, blasted a 99-mph fastball to left center for a walk-off homer. In play run(s). ‘Twas an exciting start for the home stand.

Before the late heroics, it looked like the Reds would be foiled by home plate umpire Mike Winters, who seemed determined to show how much he could disadvantage hitters with his strike zone tonight. For example, here’s a Zack Cozart AB where pitches #1, #4 and #6 were *called* strikes by Winters. 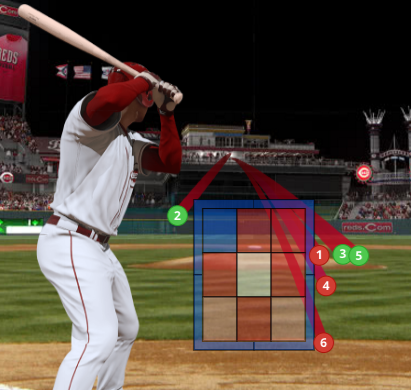 Winters turned Mike Foltynewicz, a pitcher with a below average strikeout rate, into Nolan Ryan. The Reds batters fought back by swinging early in the count. The results, predictably, were ugly. Until the 9th.

Six innings and two earned runs is as good as the Reds are going to get from Bronson Arroyo and that’s what the 40-year-old pitcher produced tonight. Arroyo struck out 2 and walked one. He lowered his ERA to 6.24; only three MLB starters have a higher ERA. Bert Blyleven holds the all-time record for giving up home runs in a season at 50. Arroyo is on pace to give up 60. Long live the rebuild.

There weren’t many positives for the home team tonight until the the 9th. They had managed three hits – singles by Zack Cozart, Tucker Barnhart and Arroyo – and three walks. ThenÃ‚Â Adam Duvall and Eugenio Suarez led off the 9th with back-to-back doubles producing the first run. Scott Schebler and Jose Peraza made outs, but Suarez advanced to third base. Braves closer Jim Johnson then bounced a ball past the catcher (which somehow Mike Winters didn’t call a strike) allowing Suarez to score the tying run. Extra innings!

Devin Mesoraco, Destroyer of Worlds and Labra, led off the 10th with his towering home run. Mesoraco can handle the fastball.

Brandon Phillips returned to Great American Ball Park. C Trent Rosecrans is all over the details. Phillips blocked the Reds from a pre-game celebration of his return and said the Reds giving out his #4 (to Scooter Gennett) was an insult. The Reds have given out Jay Bruce’s number and Johnny Cueto’s number and Todd Frazier’s number to other players. The Reds gave Joe Morgan’s number toÃ‚Â Rafael Landestoy.

Phillips should be more worried about the #5; he went 0-for-5 tonight.

Media note: Jim Day filled the play-by-play chair on the radio broadcast tonight and did a great job. Clear, informative, prepared, easy teamwork with Jeff Brantley. Day mentioned on-base percentage in the first inning which is more than the regular broadcaster has all season. Goes without saying that we all have different preferences for our broadcasters. I really liked the job Day did tonight.